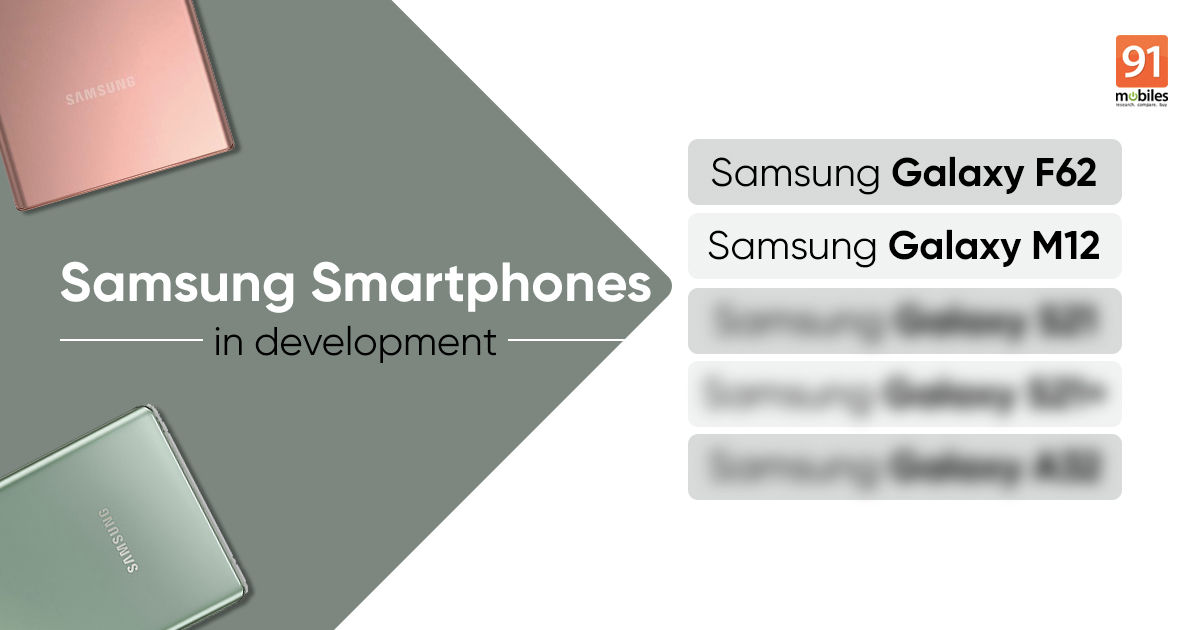 Samsung seems to have one too many phones down the pipeline. Whether it’s affordable, mid-range or flagship, the South Korean phonemaker has its hands full. The upcoming Samsung smartphones that have been doing the rounds of the rumours mill, include Samsung Galaxy F62, Samsung Galaxy M12, Samsung Galaxy A32 5G, Samsung Galaxy S21, and Samsung Galaxy S21+. While there is nothing official yet, some of these smartphones, if not all, are expected to launch in India or globally in the next couple of months. 91mobiles recently reported that the production of the Samsung Galaxy F62 has already begun in India. Several leaks have detailed the handsets’ specifications, design, and other details. Here’s a brief summary of what we know so far!

Samsung Galaxy F62 launch in India is expected soon as the handset’s production has begun in the country. The upcoming F-series phone is rumoured to be a follow up of Samsung Galaxy F42 that was introduced back in October. Samsung Galaxy F62 specifications, per the alleged Geekbench listing, will include the Exynos 9825 SoC coupled with 6GB RAM and Android 11 OS. The phone is said to be among the slimmest options out there. The rest of the details remain under the wraps at the moment, but we speculate the Galaxy F62 to pack an AMOLED display, multiple camera sensors, a beefy battery with fast-charging support, and 4G LTE only connectivity.

Samsung Galaxy M12 launch also seems to be around the corner. The handset was recently spotted on the Bluetooth SIG and Wi-Fi Alliance certification websites. The phone may come with a dual-tone finish, squarish camera module, and waterdrop notch display. As for the specifications, the Samsung Galaxy M12 is rumoured to pack a 6.5-inch/ 6.7-inch display with an Infinity-V panel, a massive 7,000mAh battery, a side-mounted fingerprint sensor, Type-C port, 3.5mm headphone jack, and a single speaker grille. Other details such as the chipset, camera sensors, RAM, and more are still a mystery. The Samsung Galaxy M12 is expected to launch as Samsung Galaxy F12 in select markets.

Galaxy S21 is the highly-anticipated smartphone expected from the house of Samsung. The handset is rumoured to be the next-gen flagship offering from the brand. The phone recently made an appearance on the BIS (Bureau of Indian Standards) certification website. The Samsung Galaxy S21 specifications are tipped to be as follows: 6.2-inch FHD+ AMOLED panel, 120Hz refresh rate screen, 4,000mAh battery, 25W fast charging solution, 5G connectivity, and 12MP triple rear cameras with 64MP telephoto lens. The smartphone is tipped to rock either the new Qualcomm Snapdragon 888 or the rumoured Exynos 2100 chipset (depending upon the market) under the hood. Rumours indicate that the Galaxy S21 price in India will be around $800 (approximately Rs 60,000).

Samsung Galaxy S21+ and S21 Ultra are rumoured to be the elder siblings of the Galaxy S21 smartphone. The handsets are expected to share many of the same specifications as the regular Samsung Galaxy S21 smartphones. The Plus model will reportedly employ a larger 6.7-inch LTPS FHD+ AMOLED panel clocked at 120Hz and a bigger 4,800mAh battery, while the Galaxy S21 Ultra could sport a huge 6.8-inch LTPO AMOLED panel with WQHD+ resolution. The smartphone is also rumoured to come with a 5,000mAh battery and quad rear cameras comprising 108MP ISOCELL HM3 primary sensor, a 12MP ultra-wide-angle lens, a telephoto lens with 3X optical zoom and another telephoto lens with 10X zoom.

Samsung Galaxy A32 is tipped to be one of the most affordable 5G phones from the company yet. The handset is rumoured to be a mid-range offering, with a 6.5-inch  Infinity-V screen. The Samsung Galaxy A32 specifications remain vague at the moment, but its design is said to include quad rear cameras, a waterdrop notch display, and Type-C port at the bottom. The phone is expected to employ a side-mounted fingerprint scanner embedded in the power button rather than under the screen.