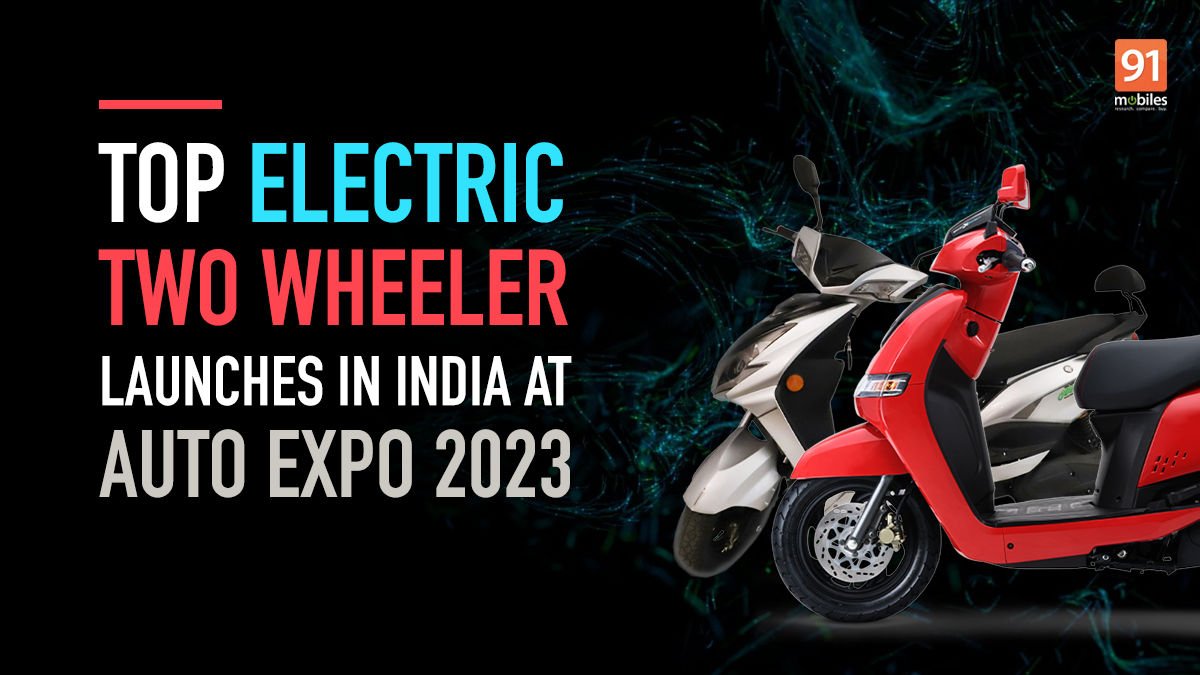 Auto Expo 2023 saw a lot of action in the electric mobility space, as veteran manufacturers and startups in their infancy poured in their EV products to the show floor. The four-day event in Delhi saw a lot of buzz in the electric two-wheeler space, a segment that is quickly heating up. Big names like TVS showed off the iQube ST premium electric scooter while more recent startups like Ultraviolette demoed a racing platform based on its new F99 electric sport bike. Here’s a round-up of 6 exciting new electric scooters that could soon make their way to the Indian market.

The electric two-wheeler segment has seen a lot of activity at India’s premier automobile exposition held at Pragati Maidan, New Delhi. With the Indian EV two-wheeler space growing at a projected 29 per cent CAGR (as per Business Wired), companies have pulled out all the stops to cater to the booming market. Here are the top 6 showcases at the auto show, which range from electric scooters and sport bikes to three-wheeled electric rickshaws. 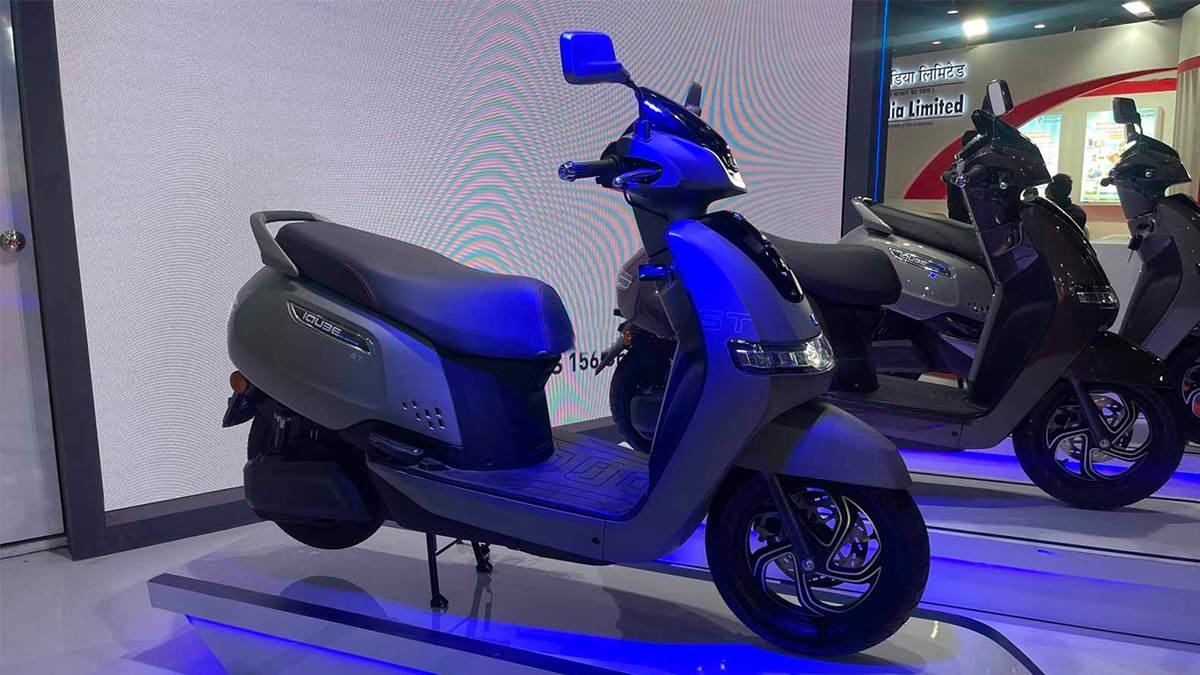 TVS showcased its electric scooter offering, the TVS iQube, in its ST variant at the Auto Expo 2023. While the premium electric scooter was announced earlier, it has not made it to the market yet. The iQube ST is the top-spec variant in the EV’s lineup and gets the largest 4.56kWh battery pack, which is a full 50 per cent larger than the battery pack present in the other two variants. This new larger battery pack allows the e-scooter to post a claimed range of 145km in Eco mode.

The iQube ST supports fast charging that allows the scooter to juice up from 0 to 80 per cent in just 2 hours and 30 minutes. The iQube ST comes equipped with an electric motor that has a peak power output of 4.4kW and a peak torque output of 140Nm that propels the scooter to a top speed of 82kmph. The scooter gets features such as a 7-inch touchscreen for the MID with a joystick controller, TPMS, connected vehicle technology, LED lighting, etc. 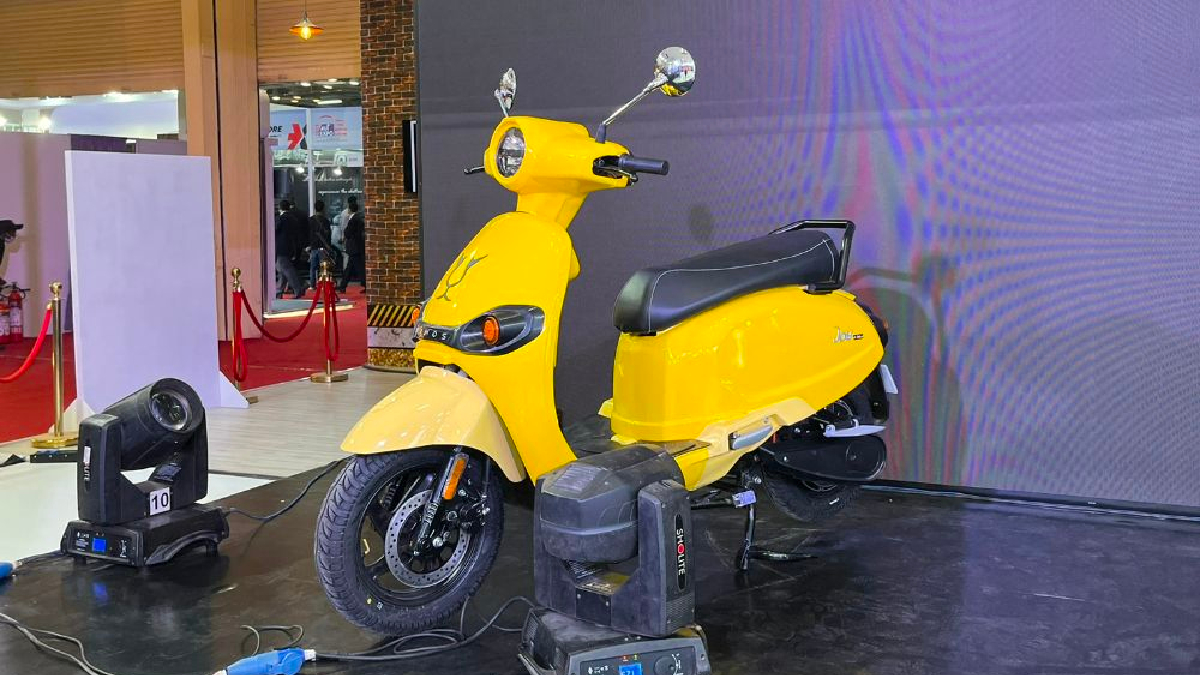 WardWizard Innovations & Mobility Ltd subsidiary Joy E-Bike launched its Joy Mihos electric scooter at the Auto Expo 2023. The electric scooter has a retro-modern design and has been built using a Poly Dicyclopentadiene (PDCPD) material that the company claims to be highly durable. The EV is underpinned by a 74V40Ah Li-ion battery with Nickel Manganese Cobalt (NMC) battery pack with a rated energy capacity of 2.5kWh. This is paired with an electric motor that is capable of going from a standstill to 40kmph in under 7 seconds and delivers a claimed range of 100km on a single charge. The electric scooter gets features such as CBS, telescopic front suspension, GPS-enabled connected vehicle features, LED lighting, etc. It has been priced at Rs 1.49 lakh (ex-showroom) and will come in Metallic Blue, Solid Black Glossy, Solid Yellow Glossy and Pearl White colour options. 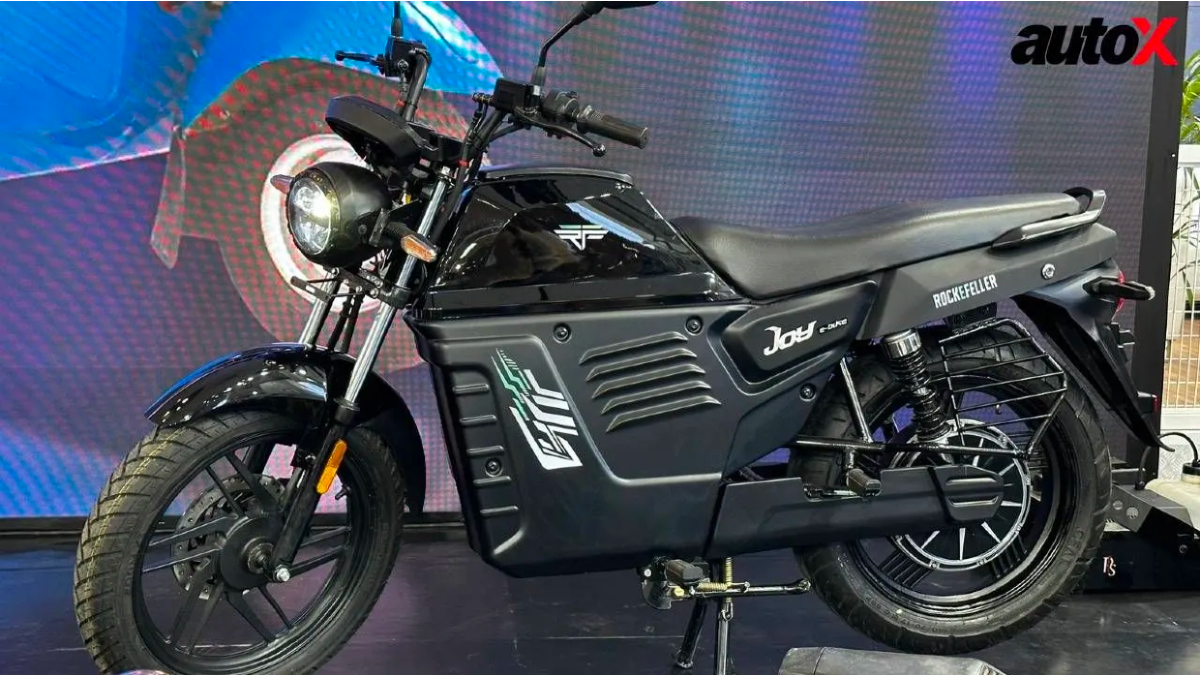 Joy E Bike also revealed the Joy Rockfeller electric bike concept that is expected to cater to the commuter biking segment in India and could debut in the market sometime by the end of FY24. The EV will boast features such as Hydraulic brakes, vehicle tracking, geo-fencing, remote deactivation, audio playback, alloy wheels, disc brakes, etc. The retro-modern-looking electric bike will also get a claimed range of 70km on a single charge. 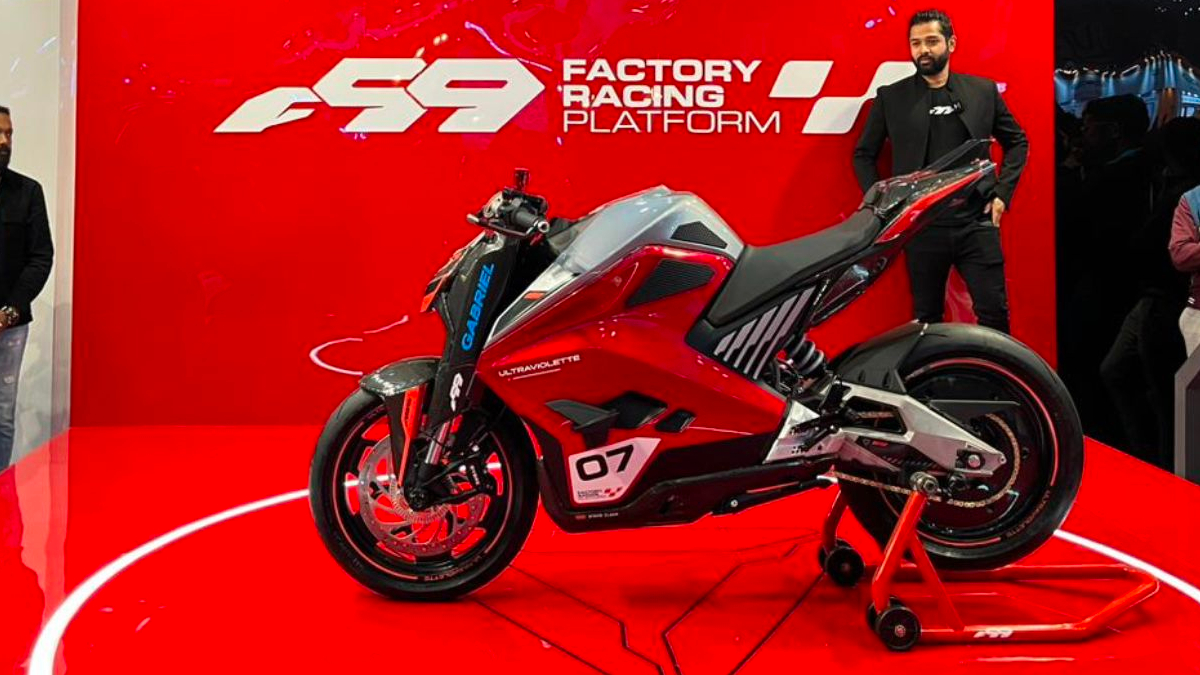 Ultraviolette took to the Auto Expo 2023 to demonstrate its new F99 Factory Racing Platform for biking enthusiasts. The new F99 is the bored-out version of F77 and aims at bettering the latter’s performance credentials. The F99 gets a 68hp motor based on a 120V architecture. This makes the F99 capable of hitting a 200kmph top speed. While acceleration times are still unknown for the F99, it can be expected to be quicker than the F77 Recon which posts a 0-100kmph time of just 8 seconds.

The F99 overall is a more focused two-wheeler with the primary focus being given to performance. Ultraviolette has adjustable rear-set foot pegs, a slimmer and stiffer seat, carbon fibre body panels, winglets on the bodywork to aid aerodynamics, a Brembo master cylinder and a pair of Pirelli Supercorsa tyres for more grip and braking power. The company has also announced its plans to conduct its first One Make Racing series this year. 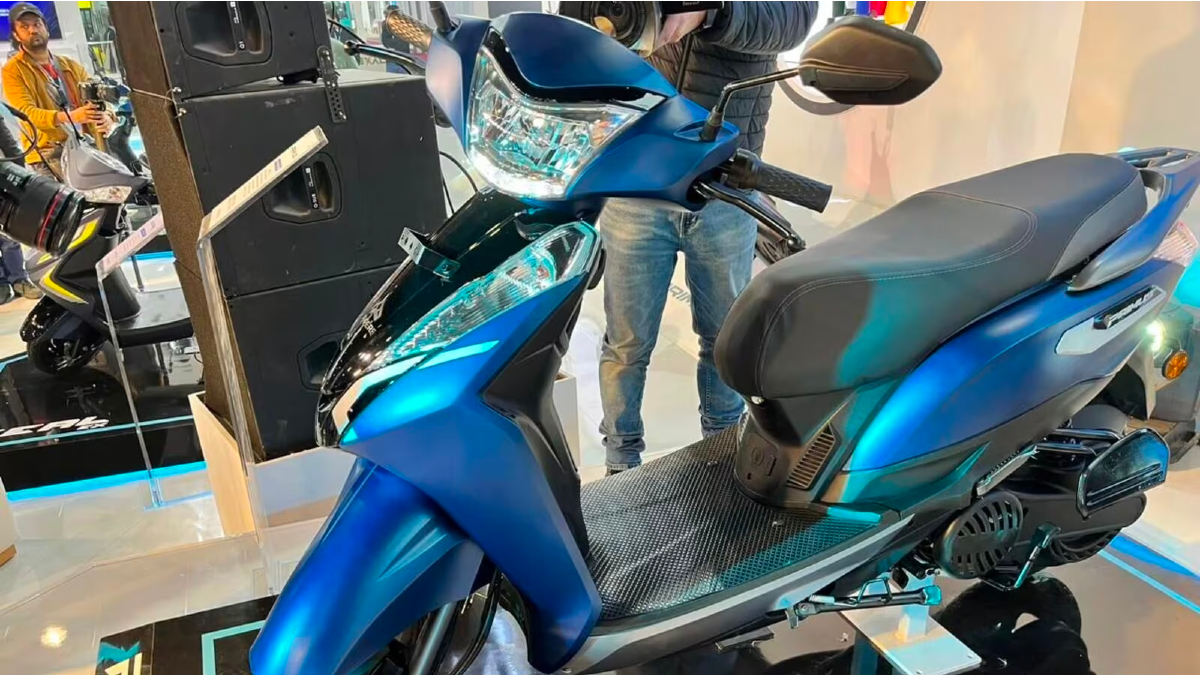 The Primus gets 3 riding modes — Power, City and Eco — and also a Reverse mode. The scooter also gets connected vehicle tech and turn-by-turn navigation. The electric scooter rides on a pair of 12-inch wheels and features CBS. The EV weighs in at 110kg and gets a 150kg load-carrying capacity. The Primus electric scooter is practical too, thanks to 22-litre under-seat storage space and 160mm of ground clearance. 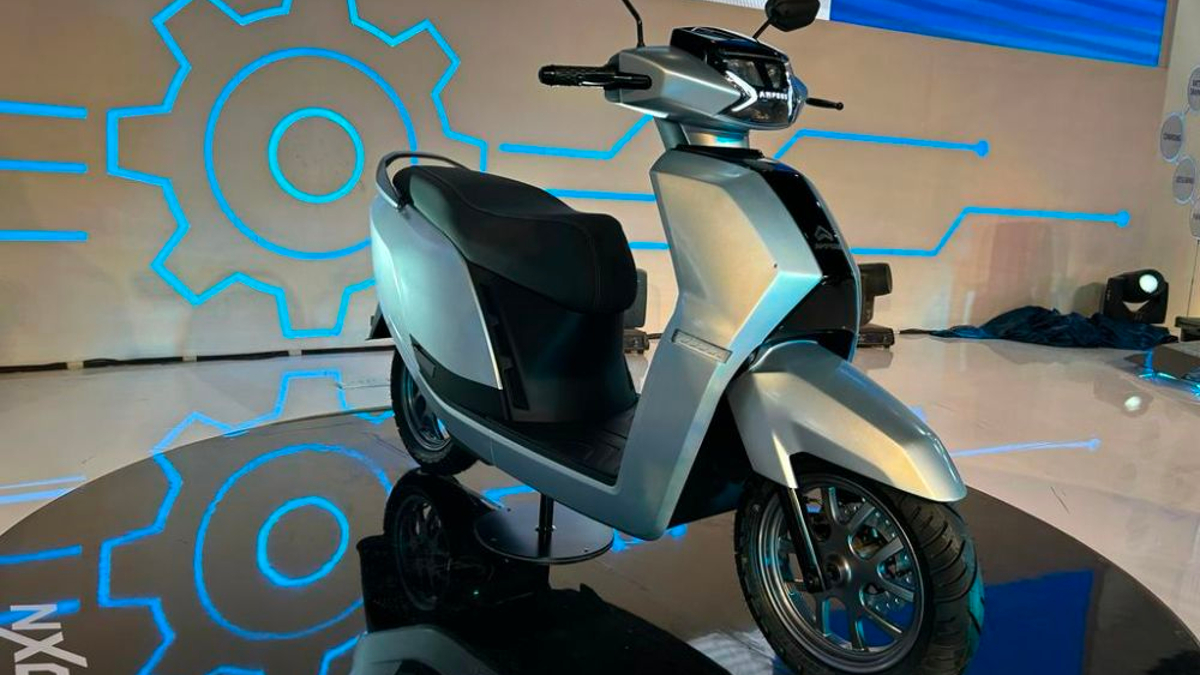 The Ampere NXU will be B2B-centric offering with a payload capacity of 200kg. The NXU will also get a different pair of thicker rubber, beefier suspension, and industrial-looking circular headlamps and is expected to cater to the fleet and last-mile delivery operators.