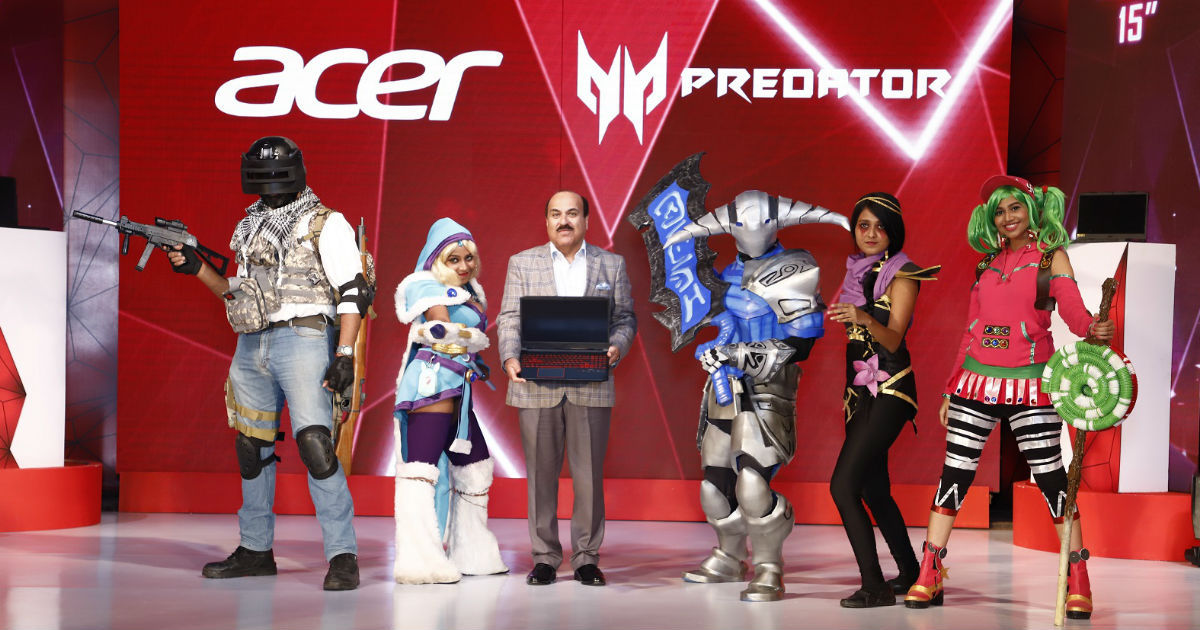 These laptops are distributed across a wide price range. Starting with Acer Nitro 5, the gaming-centric laptop has been priced at Rs 59,999 for the base variant. The laptop comes in two screen sizes: 15.6-inch and 17.3-inch, with narrow bezels and 80 percent screen-to-body ratio. The Nitro 5 combines the 9th-gen Intel processor with the latest NVIDIA GeForce GTX graphics, two M.2 Gen 3 x4 PCIe SSDs using NVMe technology, and up to 32GB of DDR4 RAM. Other features include Wi-Fi 5 with 2×2 MU-MIMO technology, NitroSense with OneTouch to keep the thermal of the laptops under check, and an array of ports such as HDMI 2.0, USB Type-C 3.2 Gen 1, and more. In addition to this, the laptop also features Acer TrueHarmony for six sound modes, turns sticky keys on/ off, and activates the LCD overdrive to bring the display response time down to 3ms.

The Acer Nitro 7, on the other hand, ships with a 15.6-inch display with a 144Hz refresh rate and 78 percent screen-to-body ratio. The machine also boasts of sleek mobile metal design measuring 0.78-inches thin and up to 8 hours of battery life. The rest of the specs of the Nitro 7 are the same as its younger sibling Nitro 5. The Acer Nitro 7 price in India starts at Rs 84,999. Both the laptops will be available on major e-stores and Acer malls across the country starting.

As for the Acer Predator Triton 900, the notebook sports a metal chassis, with a 17.3-inch 4K IPS display and CNC-machined Ezel Aero Hinge that flips, extends, and reclines. The laptops offer four different modes: display mode for sharing the screen with friends during gaming sessions, Ezel mode for playing games on the touch screen, notebook mode for traditional gaming scenarios, and tablet mode. At its core lies 9th-gen Intel Core i9 processor with NVIDIA GeForce RTX 2080 GPU, two 512GB PCIe NVMe SSDs, and up to 32GB RAM. The Triton series 900’s trackpad is placed beside the mechanical keyboard, which packs RGB backlighting and macro keys.

Acer Predator Triton 500, meanwhile, packs a 15.6-inch Full HD display, all-metal chassis, narrow bezels, and 81 percent screen-to-body ratio. While the laptop has the same core specs as its elder sibling Triton 900, it rocks by slightly underpowered 8th-gen Intel Core i7 processor. Apart from this, both the laptops feature 4th Gen AeroBlade 3D metal fans that increase airflow by 45 percent, Coolboost technology during extended gaming sessions and Waves Maxx that is claimed to offer superior sound quality along with Waves Nx for a 3D audio experience. The Acer Predator Triton 500 and Triton 900 laptops’ prices start at Rs 1,65,999 and will be available on major e-commerce platforms and Acer shops in India.

The Acer Predator Helios 300 and Predator Helios 700 come with up to 17-inch display that bears Full HD resolution and 144Hz refresh rate. The laptops are powered by up to 9th-gen Intel Core i9 processor for the “top of the line overclockable performance” coupled with an NVIDIA GeForce RTX 2080 or 2070 GPU, and up to 64GB of DDR4 memory. While the Acer Predator Helios 300 packs 4th Gen AeroBlade 3D Fans for cooling, the Helios 700 features a custom-engineered dual-engine dual 4th-gen AeroBlade 3D Fans, five copper heat pipes, a vapor chamber, and Acer CoolBoost Technology. The latter also includes a unique HyperDrift forward-sliding keyboard that helps maximize airflow to keep the system cool.

Acer Predator Helios 300 has been priced at Rs 1,14,999 onwards and is available at e-store and Acer Malls. The Predator Helios 700 will set you back to Rs 2,49,999 for the base variant and will go for sale in the country starting from mid-September.

Alongside gaming laptops, Acer has also announced Nitro Steam, which is a dedicated streaming PC for hassle-free Full HD streaming, share gameplay, and interact with friends and the gaming community. The price and availability of the device haven’t been revealed yet. Lastly, customers looking for gaming monitors, Acer has introduced new AOPEN and Nitro monitors, with a starting price of Rs 7,999.