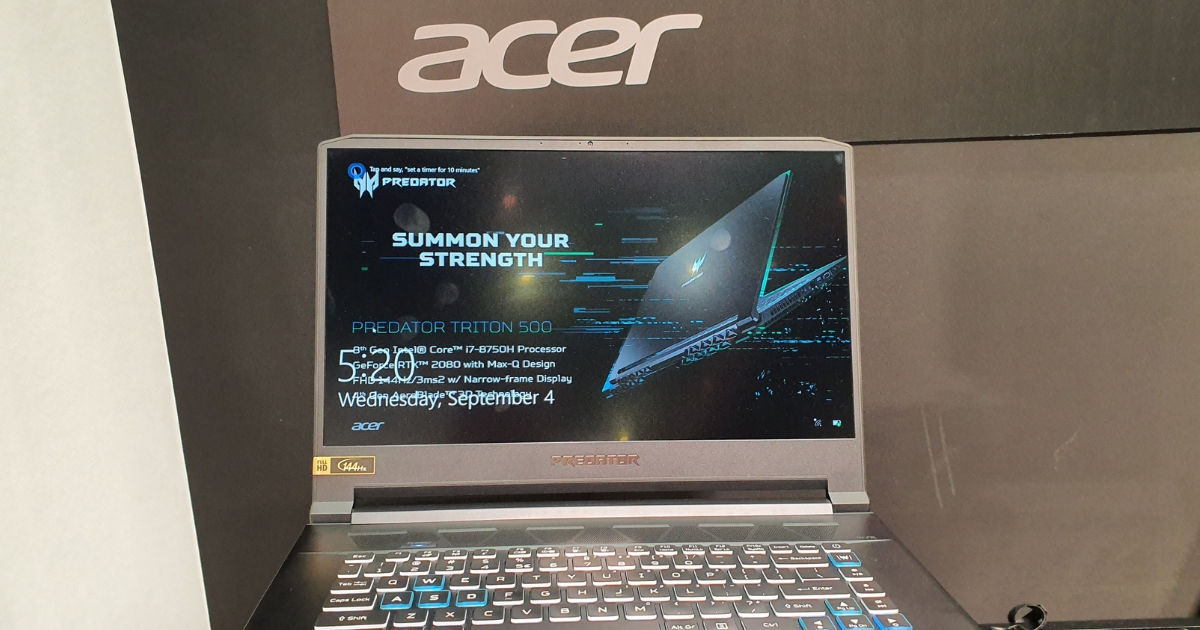 When it comes to gaming laptops, Acer’s Predator series ranks quite high. That’s because the brand started catering to the segment quite early, and has been among the first to introduce the latest features as well as specs. At the Next@Acer conference before IFA 2019 officially kicked off, the Taiwanese giant expanded its Predator series with the launch of the most affordable offering in the range, the Predator Triton 300 rig. Alongside, it also introduced an upgraded Predator Triton 500. So if you are looking for a capable machine that can handle gaming on the go, then should you wait for these devices? Well, based on my initial experience with them, I might have an answer for you… 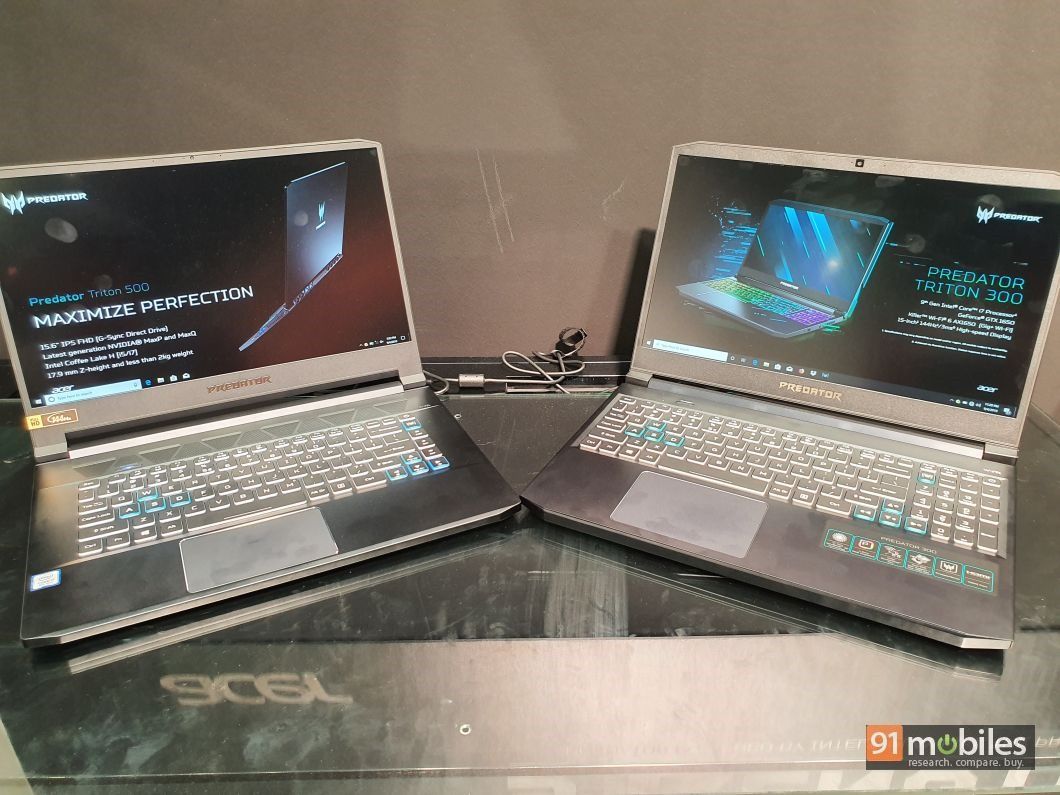 First, let’s discuss the Triton 500. It’s exactly the same device that was launched back in April, both in terms of the design and specs, i.e. up to Intel’s 9th-gen Core i7 processors, NVIDIA’s RTX line of graphics cards, and up to 1TB SSD. But now, it comes with a 300Hz refresh rate panel – something that not many laptops can boast of.

Coming to the Acer Predator Triton 300, it might be affordable, but it doesn’t cut any corners to achieve that. That means, you get a robust build quality with aluminium as its construction material. Sadly, as I’ve found with most laptops from Acer, the screen is prone to flexing when the pressure is applied. That said, the device can be opened with a single hand, which does suggest that the display panel is relatively solid. What I didn’t like however, was the smooth finish on the outside lid as well as the palmrest area, which meant that the device was susceptible to fingerprints (as can be seen from the images below). 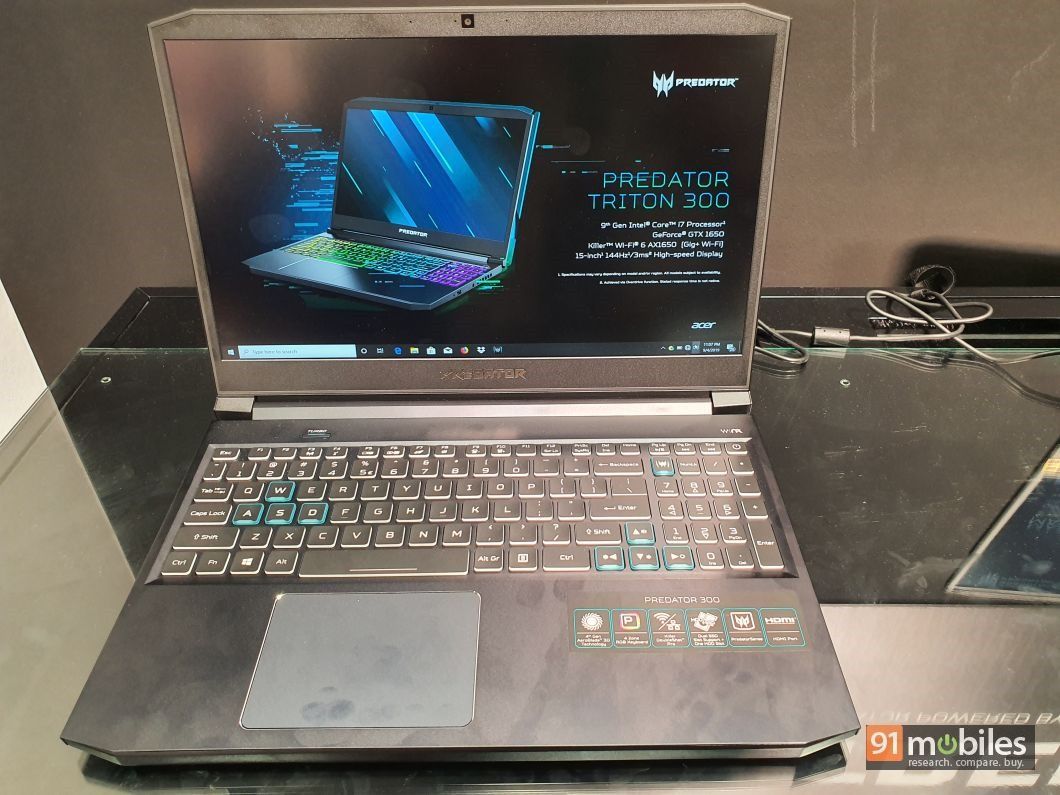 As far as ports are concerned, you would find that the device offers the full gamut… two USB Type-A ports, a Type-C socket, an HDMI port, a mini-Display port, an Ethernet port and a lock port towards the left, and a headphone interface, another Type-A port and a charging socket on the right. The laptop weighs 2.5kg, which is decent for a gaming laptop. 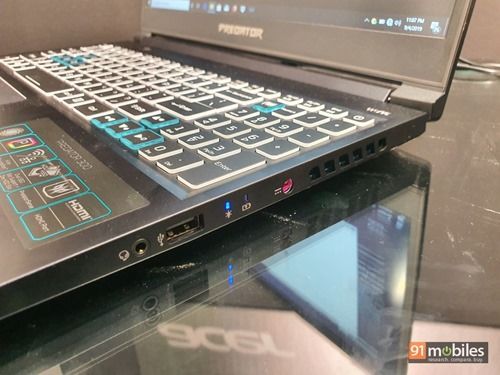 Talking about the display, just like its pricier sibling, the Triton 300 ships with a 15.6-inch IPS panel which bears a resolution of 1,920 x 1,080 pixels. Unlike the Triton 500’s 300Hz refresh rate (in the maxed-out version), the display on this model has a refresh rate of 144Hz. 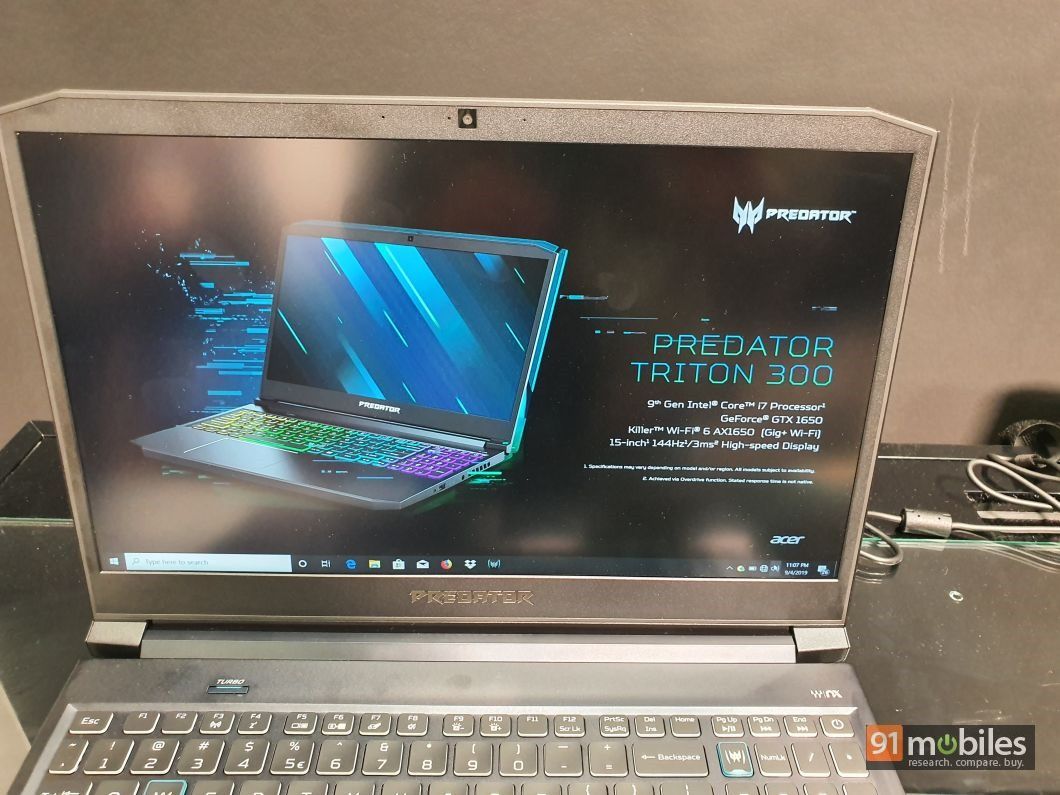 I also liked the typing experience on the Predator Triton 300 as the keys have good amount of travel and it doesn’t take you long to get familiar with the layout as well. You’ll also notice that the trackpad is placed off-centre, but using it is a delight as its extremely smooth and responsive. 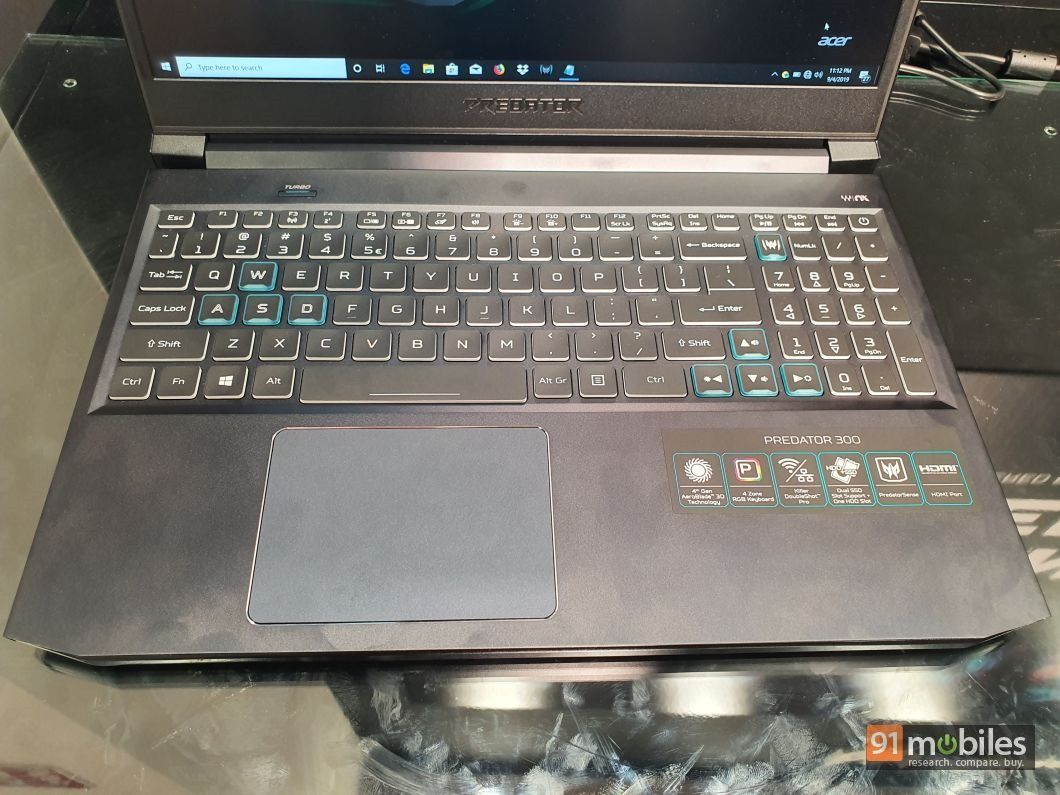 Powering the show on Acer’s Predator Triton 300 is Intel’s 9th-gen chipsets, with the highest-end variant sporting Core i7-9750H CPU. The hexa-core processor is clocked at 2.6GHz, and is paired with 16 gigs of RAM (expandable up to 32GB). The storage stands at up to 2TB SSD and 1TB HDD. 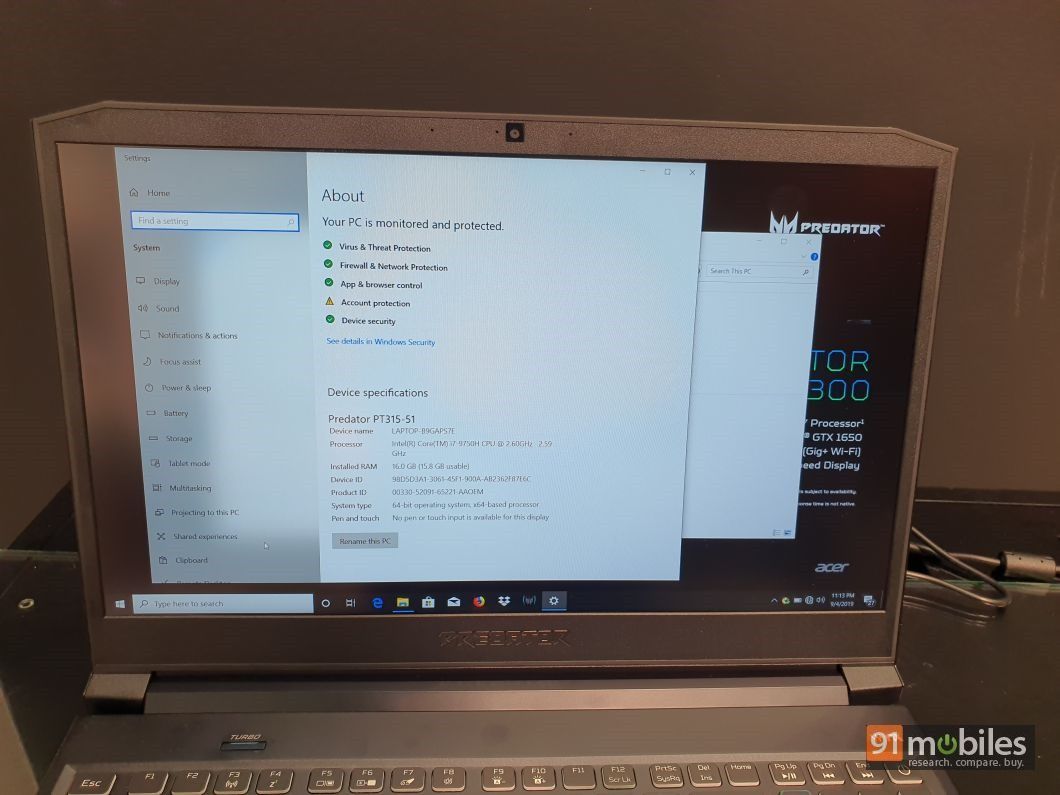 Without a doubt, the highlight of a gaming-centric machine is its graphics card. To that end, the Triton 300 comes with GTX 1650 GPU, which is the most affordable offering from NVIDIA that offers ray tracing capabilities.

The laptop ships with Predator Sense software, which lets you get at-a-glance view of the utilisation of internals as well as change things like lighting effects. Other than that, you’ll find regular set of software features, as the device boots Windows 10 Home. 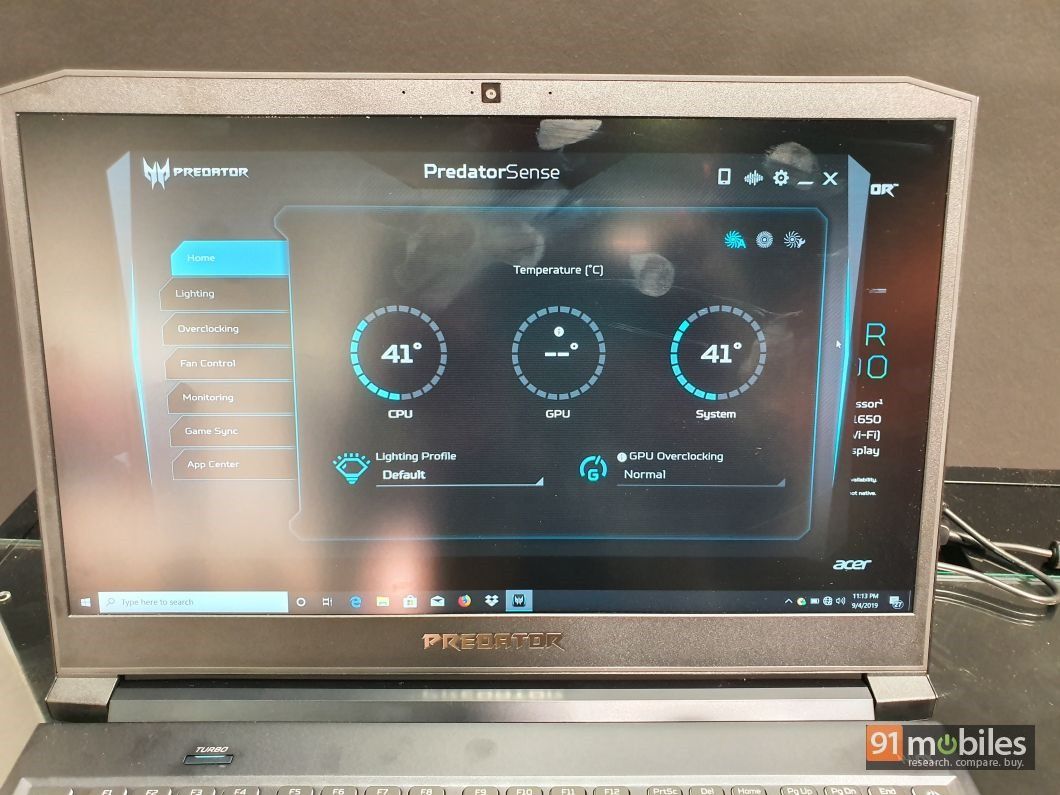 The Acer Predator Triton 500 is already available to buy in India with a starting price of Rs 1,65,999. The Predator Triton 300 on the other hand, will be going on sale next month, though its pricing hasn’t been divulged yet. But considering that it’d be priced lower than the Triton 500, the latest offering from the Predator lineup could be an ideal offering for those who’re looking for a relatively affordable gateway into the world of gaming.