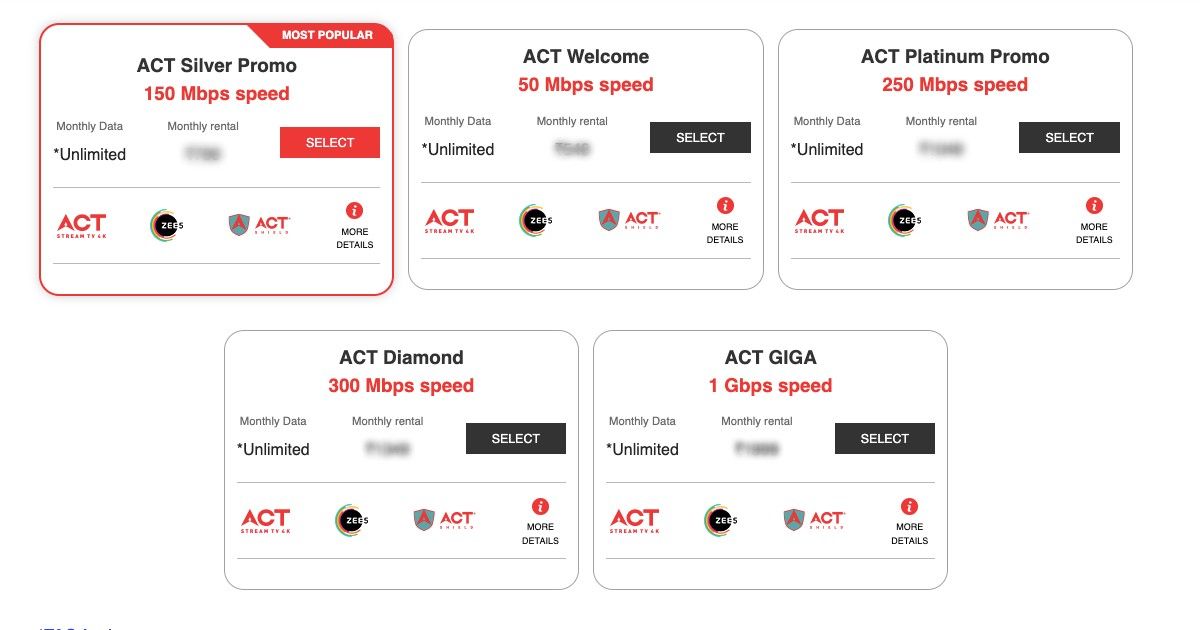 ACT Fibernet is among the top internet service providers in India. With competitive pricing and high-end internet infrastructure, ACT has made a strong name for itself in various cities. All its broadband connections utilise fibre optic technology, which is far superior in terms of speed and reliability to the traditional solutions that use copper wires. That said, in this article, we’re taking a look at all the ACT Fibernet plans offered in major cities such as Delhi, Bangalore, Hyderabad and Chennai. This comprehensive plan list will help you decide the best plan according to your needs. So without further ado, let’s begin.

ACT Fibernet offers broadband plans keeping in mind the usage and requirement of the users, thus, there are tons of plans to choose from. While most plans are said to come with unlimited internet data, there is a FUP limit of 3300 GB per month. But since this huge amount is quite impossible to consume in a month, it’s directly regarded as “unlimited”. Upon exhaustion of the said limit, the speeds will be limited and vary according to each plan. With that out of the way, let’s take a look at all the different plans offered by ACT in various cities.

The ACT Fibernet plans in Delhi start at Rs 549 and go up to Rs 1,999. Here are the benefits they offer:

The most basic ACT broadband plan is more than enough for people with low to medium internet usage. This ‘Welcome’ plan comes with unlimited 50 Mbps internet speed, has a 30 days validity and the monthly rental price is Rs 549 exclusive of 18 percent GST.

The ACT Silver Promo plan offers 150 Mbps unlimited internet speeds post which the speeds are restricted to 512 Kbps. This plan comes with a validity of 30 days and is priced at Rs 799, which is also exclusive of 18 percent GST.

To take things further, the ACT Platinum Promo plan provides speeds of 250 Mbps with a validity of 30 days. This broadband plan will cost you Rs 1,049 per month exclusive of GST.

In addition to that, ACT offers expeditious speeds of 300 Mbps under its ‘Diamond’ plan. This one will cost you a hefty amount of Rs 1,349 for 30 days validity. Once again the prices do not include taxes.

To experience the ultimate internet speeds of 1 Gigabit, ACT GIGA is the plan to go for. Coming with 1 Gbps unlimited internet speed, this is capable of streaming 8K content without any hiccups be it movies, videos or online games. This broadband connection will cost you Rs 1,999 per month along with taxes, which is significantly less than the Jio Fiber broadband 1-gigabit plan. That said, Jio offers a bunch of streaming platforms subscription, including Netflix, which aren’t available with the ACT plan.

Much like Delhi, ACT Fibernet plans in Bangalore are at various denominations and speeds. However, not all of them come with unlimited or 3,300GB of data. Here’s a quick look at the price, benefits, and validity of the ACT broadband plans in Bangalore.

As the name suggests, the ACT Basic plan comes with 40 Mbps speeds with a quota of 500 GB data per month. Meaning unlike other regions, the starter pack doesn’t offer unlimited speeds. The broadband plan has a monthly rental price of Rs 549 exclusive of 18 percent GST. The speeds will be capped to 512 Kbps once the whole data has been exhausted.

Packing in more internet data, the ACT Swift plan comes with 750 GB data along with speeds of 75 Mbps, post which the speeds will be limited to 512 Kbps. The monthly rental price of this plan is Rs 710 exclusive of 18 percent GST and comes with a validity of 30 days.

This broadband plan provides 100 Mbps speeds with monthly limited data of 1000 GB. Once this data is depleted, the speeds will be capped to 512 Kbps. The pricing set for this plan is Rs 985 which again doesn’t include the taxes.

Adding just Rs 100 to the ‘Rapid Plus’ plan you can get the Act Blaze plan, which gives 1500 GB worth of data at 150 Mbps speeds. But here the speeds will be capped to 1 Mbps as opposed to 512 Kbps once the data is exhausted. The validity remains the same i.e. 30 days.

This is where you can get unlimited internet data. The ACT Storm plan provides speeds of 300 Mbps with a validity of 30 days. This plan will cost you Rs 1185 per month exclusive of GST.

ACT Lightning plan comes with unlimited speeds at 350 Mbps for a monthly rental price of Rs 1425 other than taxes.

When the speeds offered by the above-mentioned plans are not enough, the ACT Incredible plan is the one to go for. Coming with unlimited 400 Mbps speeds, this plan will set you Rs 1999 exclusive of 18 percent GST for one-month validity.

Offering mammoth speeds of 1 Gbps, ACT GIGA’s monthly rental price is Rs 5999 exclusive of taxes. The plan to go for when you need internet access for hundreds of devices simultaneously.

For the Hyderabad region, the ACT Fibernet plans are as follows:

The most basic ACT Fibernet plan offered in Hyderabad is the ‘A-Max 500′ plan. Having different naming schemes as opposed to other regions, this plan features 40 Mbps speeds with a data quota of 1TB i.e. 1024 GB. It is priced at Rs 500 exclusive of 18% GST with a validity of 30 days.

As the name suggests, the A-Max 700 is priced at Rs 700 which offers 75 Mbps unlimited internet. The validity for this plan is one month. Also, the prices do not include taxes.

For moderate to high internet consumption, the A-Max 1325 is the broadband plan to go for. This plan provides 300 Mbps unlimited internet access and is priced at Rs 1325 excluding GST. The validity for this one is 30 days as well.

The Incredible 1999 ACT Fibernet plan is for those who want blazing fast download and upload speeds. Coming with unlimited 400 Mbps speeds, this plan has got you covered for 4K streaming and movies & game downloads all at the same time. It is priced at a hefty Rs 1999 which excludes 18% GST and has a validity of 1 month.

If one wants the absolute best of the best download and upload speeds, the ACT GIGA broadband plan is the one to go for. Offering speeds of 1000 Mbps, this internet connection will definitely not disappoint. That said, per month the rental price of this plan is Rs 5999.

Here are the various ACT Fibernet plans available in Chennai:

As the name suggests, the ACT Starter plan provides the basic internet speeds of 40 Mbps which is unlimited at a monthly price of Rs 549 exclusive of taxes.

Packing in more internet data, the ACT Basic plan comes with unlimited data along with speeds of 75 Mbps, post which the speeds will be limited to 512 Kbps. The monthly rental price of this plan is Rs 820 exclusive of 18% GST and comes with a validity of 30 days.

The Act Blaze broadband plan comes with 125 Mbps unlimited internet with a validity of 30 days. The price of this offer is Rs 1020 which also includes access to Zee5, Sony LIV, Hungama subscriptions and more.

By adding a mere Rs 55 to the ACT Fibernet Blaze plan, you can get 200 Mbps unlimited internet in the ‘Blast Promo’ plan. Meaning this plan will set you back Rs 1075 for 30 days as well along with all the other benefits.

Next up is the ACT Storm internet plan at Rs 1125 which will provide 250 Mbps worth data and has a validity of 30 days.

To take things further, ACT offers high speeds of 300 Mbps under its ‘Lightning’ plan in Chennai. This one will cost you a hefty amount of Rs 1325 for 30 days validity. Once again the prices do not include taxes.

Those wanting the most out of their internet usage can go for the ‘ACT Incredible’ internet connection which comes with unlimited 350 Mbps data. It will cost you Rs 1999 a month.

The ACT GIGA makes its way to Chennai as well which offers colossal speeds of 1000 Mbps that is as expected unlimited. This plan comes at a heavy price of Rs 2999 with a validity of 30 days.

Below are the answers to some of the most commonly asked questions related to ACT Fibernet broadband plans and connections.

What are some other offers provided in ACT Fibernet broadband plans?

ACT Fibernet broadband plans offer free one-month subscription trials to certain apps and services such as Zee5, Epic On – an online movie and TV shows streaming app, and Cult-fit. On the other hand, it also offers subscriptions to popular streaming platforms such as Sony LIV at Rs 299 for one month, Hungama at Rs 99 for one month, Aha at Rs 349 for one year, ACT Shield security for 2 devices at Rs 49 per month, and ACT Stream TV 4K subscription for Rs 200 per month. The Stream TV 4K is an Android device sold separately for Rs 4,499.

What are the installation charges of ACT Fibernet broadband connection?

There are no installation charges for an ACT Fibernet connection. On top of that, ACT is also providing a free router irrespective of the broadband plan you opt for.

In which cities is ACT Fibernet connection available?

The ACT Fibernet is available in as many as 20 cities. Four of them have already been stated above, the remaining 16 cities include Ahmedabad, Coimbatore, Eluru, Guntur, Jaipur, Kakinada, Madurai, Nellore, Rajah, Lucknow, Rajahmundry, Tirupati, Tiruvallur Vijayawada, Vishakhapatnam, and Warangal. The plans in most of these cities are available starting at Rs 549.