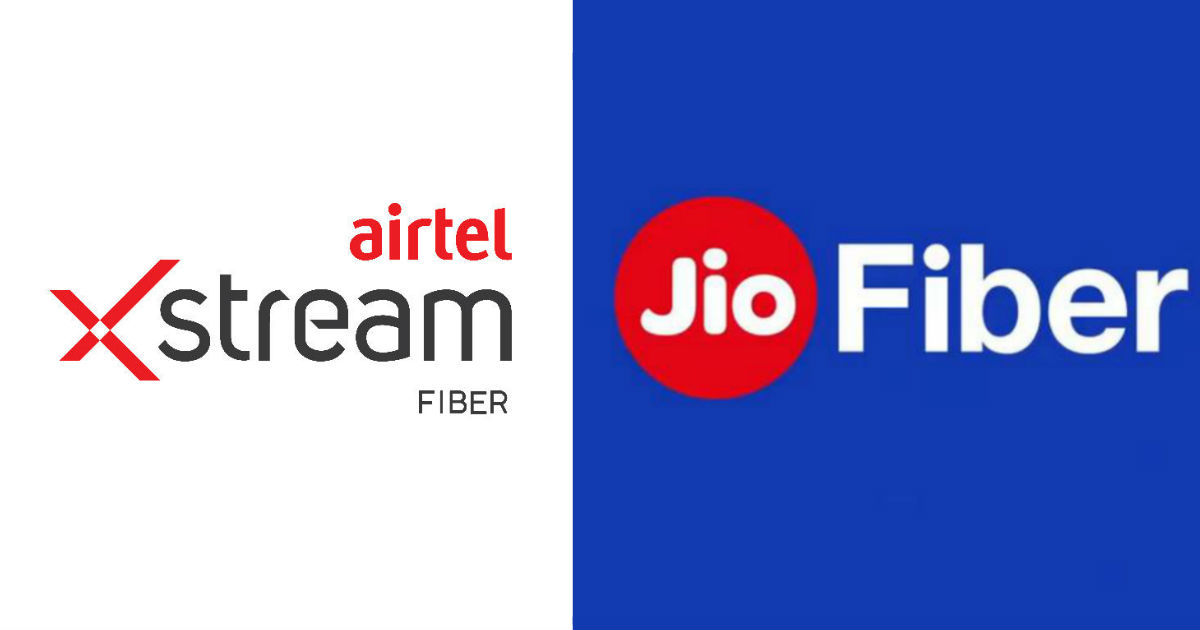 “The Airtel Xstream Fiber broadband plans start from Rs 799, while the Jio Fiber costs Rs 699 for the entry-level plan that offers 100Mbps speed”

A month after the commercial launch of Jio Fiber, Airtel has announced a new brand identity for its broadband services, ‘Airtel Xstreme Fiber’. The new plans are likely to help the telco compete better against its arch-rival Jio. The Airtel Xstream Fiber plans now start at Rs 799, which is close to the Jio Fiber’s entry-level Rs 699 broadband plan that offers 100GB data and 100Mbps download speed. Like Jio, Airtel has included a bunch of complimentary benefits such as unlimited Local/ STD calls and Xstream content with the broadband plans. So if you’re out in the market looking for a new broadband connection, here’s what the countries top-most telcos Jio and Airtel have to offer:

The Rs 799 Airtel broadband plan is the most affordable option from Airtel’s stable. The broadband plan offers 150GB data with up to 100Mbps speed, unlimited local/ STD calls, and access to Airtel Xstream content for free. The Rs 699 Jio Fiber plan, on the other hand, ships with 100GB data for a month, up to 100Mbps speed, free voice calls across the country, and 3-month premium subscription to JioSaavan and JioCinema apps.

The Rs 999 Airtel plan, which the company calls Entertainment plan, has better speed and data allowance. The monthly pack is touted to deliver up to 200Mbps speed for the first 300GB of data. Apart from this, customers will also get a one-time three months of Netflix subscription, 12 months of Amazon Prime membership, and access to Zee5 and Airtel Xstream content. As for Jio Fiber’s Silver plan, it’s slightly cheaper and the high-speed internet is limited to 200GB instead of 300GB. At Rs 849, you get up to 200Mbps speed, free unlimited calling to any network across the country, and of course, 3-month JioSaavn and JioCinema subscription.

The Rs 1,499 Xstream Fiber is Airtel’s ‘premium’ broadband plan. Customers getting into the plan enjoys up to 300Mbps speed and 500GB of data. The other complimentary benefits remain the same as the Rs 999 Airtel Xstream Fiber Entertainment plan. The ‘premium’ plan compete against the Jio Fiber ‘Gold’ plan that comes with a monthly rental price of Rs 1,249. For the amount you get, 500GB data at up to 250Mbps speed and premium subscription of JioSaavn and JioCinema.

For those with extensive data consumption, Airtel has the Rs 3,999 VIP Xstream Fiber broadband plan. The plan offers ‘unlimited data’ and an astounding speed of up to 1Gbps. Jio Fiber also has a similar broadband plan of Rs 3,999 in its portfolio. The plan is dubbed as Platinum, and it offers up to 1Gbps speed along with unlimited data with a FUP of 2,500GB. Unlike the other broadband plans from Airtel and Jio, Rs 3,999 plan doesn’t come with additional data benefit.

While the new Airtel Xstream Fiber plans are slightly more expensive than the Jio Fiber offerings, they do deliver better speed and data allowance. The other advantage of Airtel broadband plan is that it’s available across the country, though some bundled benefits may be different depending on the circles. Apart from this, all the new Xstream Fiber plans, barring Rs 3,999, come with an option to upgrade to unlimited data bundling at high speed by separately paying Rs 299 a month. Additionally, as part of a special benefit, Airtel Xstream Fiber customers can purchase the Xstream 4K Hybrid STB at a special price of Rs 2,249 only. The box otherwise costs Rs 3,999.

Jio, meanwhile, is only available in roughly 1,600 cities across India. The telco giving away extra data up to 250GB valid for six months as part of introductory benefits. The Jio Fiber plan is also bundled with Jio Home Gateway worth Rs 5,000, Jio 4K Set-Top Box worth Rs 6,400, Norton anti-virus device security (up to 5 devices), TV-based video calling, and interactive gaming worth up to Rs 1,200 for free. The telco is yet to roll out most of the benefits to its customers. Getting the Jio Fiber plan requires a one-time security deposit of Rs 2,500, which includes Rs 1,000 non-refundable installation fee and refundable Rs 1,500 security deposit.