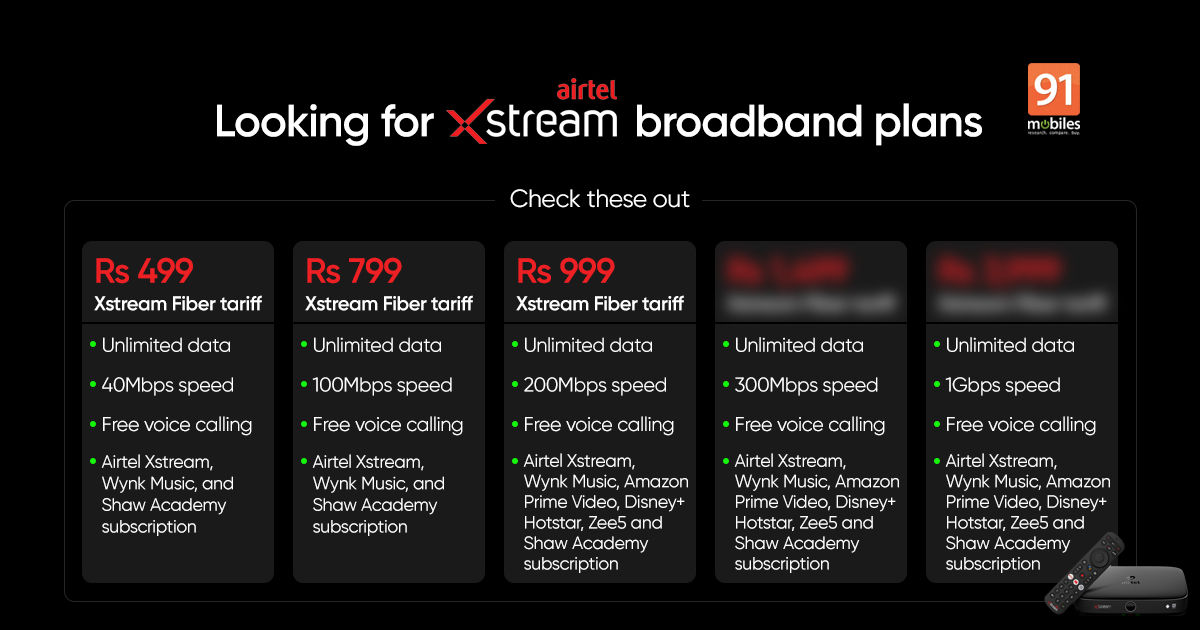 Airtel Xstream Fiber Rs 499 broadband is the cheapest Airtel Xstream Fiber plan, which offers 40Mbps speed and unlimited data (FUP capped at 3,500GB). The plan also is bundled with free voice calls and a complimentary subscription to the Wynk Music and Shaw Academy.

The Rs 799 Airtel broadband plan comes with all the same benefits as the Rs 499 plan, but you get up to 100Mbps instead of 40Mbps. That means you get a complimentary subscription to the Wynk Music and Shaw Academy, and the FUP is capped at 3,500GB.

Airtel broadband is available with 200Mbps speed with Rs 999 plan. It also includes unlimited voice calls and a free subscription to Wynk Music, and Shaw Academy.

If you’re looking for plans with around 300Mbps speed, Airtel offers a Rs 1,499 Xstream Fiber plan. Except for the speed, the rest of the benefits of this pack remain the same as the Rs 999 Airtel broadband plan.

If you are all about speed, this Airtel Fiber plan is the way to go. Priced at Rs 3,999, the tariff offers up to 1Gbps speed for 3,500GB monthly data. The plan is also bundled with a complimentary subscription to Wynk Music and Shaw Academy.

How to apply for Airtel broadband new connection, installation charges

As for the installation charges, you’ll have to pay Rs 1,000 to get the broadband connection. For the Airtel Xstream 4K Android Box, users will have to pay a refundable security deposit of Rs 1,500, meaning the amount will be given back upon surrendering the connection.

Airtel Xstream Fiber is available in almost every major metropolitan city, including Delhi, Gurgaon, Faridabad, Noida, Chennai, Hyderabad, Pune, Agra, Ajmer, Bahadurgarh, and Mumbai. You can go to Airtel’s official website to check the availability of broadband in your area.

The Airtel broadband plans priced at Rs 999 or above come with Amazon Prime subscription. The subscription offers several benefits, including access to OTT service Prime Video. In addition to this, all Airtel Xstream Fiber plans, including Rs 499, Rs 799, Rs 999, Rs 1,499, and Rs 3,999, come with complimentary access to Wynk Music and Shaw Academy.

No, Airtel Xstream Fiber broadband plans don’t offer a free subscription to Netflix. You only get Amazon Prime Videos access.

Is there any FUP limit in Airtel Xstream Fiber broadband?

While the Airtel broadband plans are said to come with unlimited data, it’s not truly ‘unlimited’. The telco has capped the monthly data usage to prevent the misuse of the plan benefits, much like Jio. There are only 3,500GB of data you can consume per month at high speed with Airtel broadband plan. After that, the internet speed will be throttled to 1mbps until the next billing cycle.