91mobiles.com
Home News Alcatel has reportedly lined up as many as six budget smartphones for... 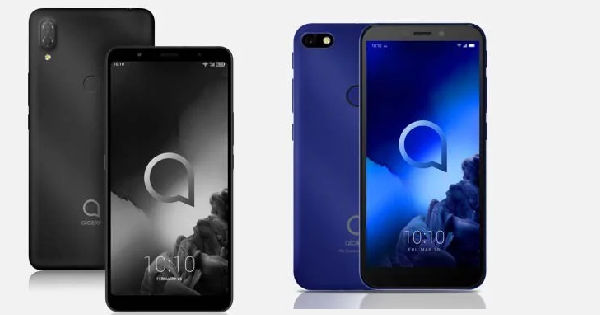 Earlier this year, TCL-owned Alcatel announced a couple of budget smartphones, named Alcatel 1X (2109) and Alcatel 1C (2019). Now, it looks to expand the lineup with the launch of as many as six smartphones during the year. Reliable tipster Evan Blass might have spilled the beans on the company’s plan. He has revealed the details of all the upcoming Alcatel smartphones, along with their specifications. 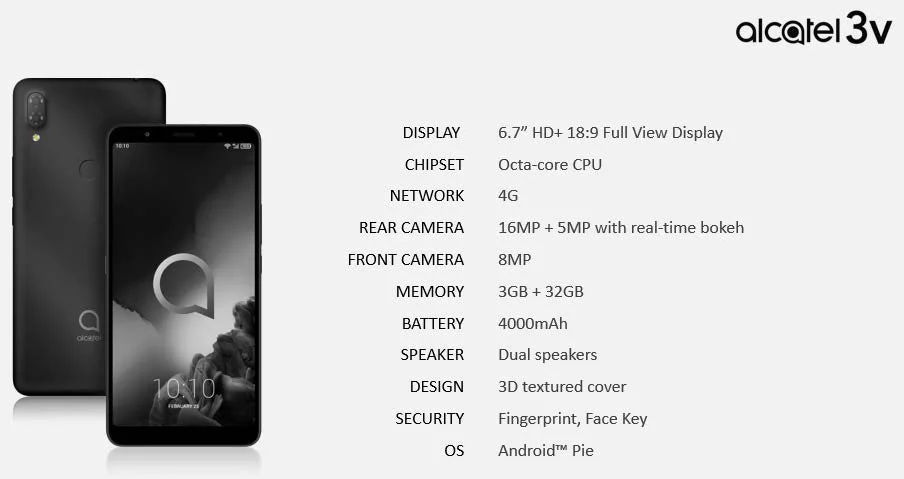 To start with, the smartphones will allegedly be dubbed Alcatel 1s, Alcatel 1v, Alcatel 3 2019, Alcatel 3c, Alcatel 3l 2019, and Alcatel 3v. They are expected to be budget offerings, with Alcatel 3v being the most-premium. The handset is tipped to arrive with 6.7-inch HD+ display with an aspect ratio of 18:9. At its core will lie an octa-core chipset paired with 3GB of RAM and 32GB internal storage. For photography, it’s claimed to rock dual 16-megapixel + 5-megapixel sensors with real-time bokeh on the rear and an 8-megapixel shooter on the front. The device will boot the latest Android 9 Pie OS out of the box and a beefy 4,000mAh will keep it up and running. Other features include a rear-mounted fingerprint sensor, dual speakers, and 3D texture cover. 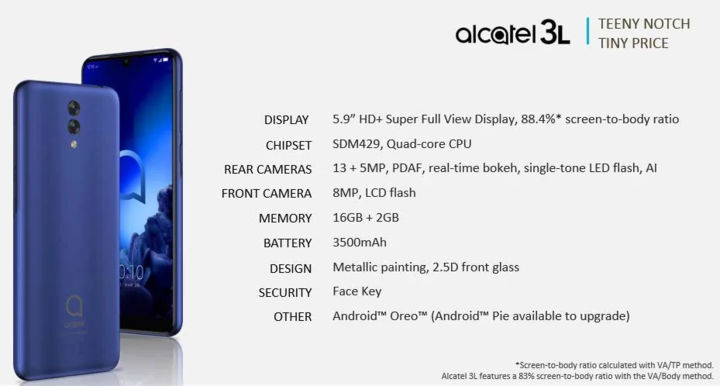 The Alcatel 3L 2019 seems to have slightly toned down specifications. It sports a 5.9-inch display with HD+ resolution and a waterdrop-style notch for 88.4 percent screen-to-body ratio. The handset will be powered by Snapdragon 429 SoC and equipped with 2GB of RAM and 16GB user-expandable storage. In optics, it has 13-megapixel primary shooter paired with a 5-megapixel secondary snapper, PDAF, real-time bokeh, LED flash, and AI on the rear. The front camera employs an 8-megapixel sensor with LCD flash for low-light selfies. The phone runs Android Oreo out of the box and houses a 3,500mAh battery. Face Key facial unlock feature rounds up the features. 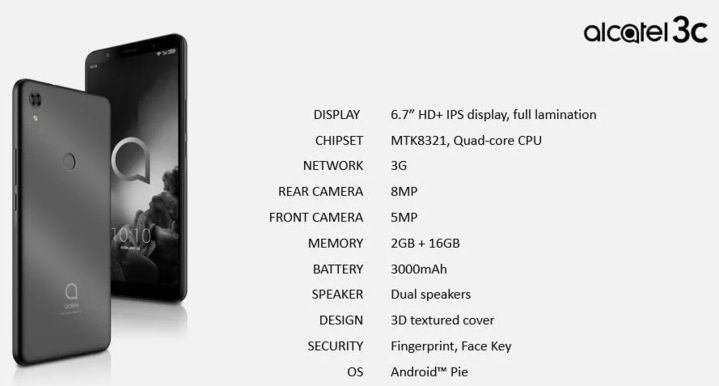 The Alcatel 3c smartphone will come with a 6.7-inch HD+ display with a wide notch, quad-core MediaTek MTK 8321 chipset, 8-megapixel rear-facing camera, 5-megapixel selfie shooter, and 3,500mAh battery. The phone may have 2GB of RAM and 16GB onboard storage, which will most likely be expandable. It’s also said to feature dual speakers and the fingerprint sensor on the 3D textured back panel. 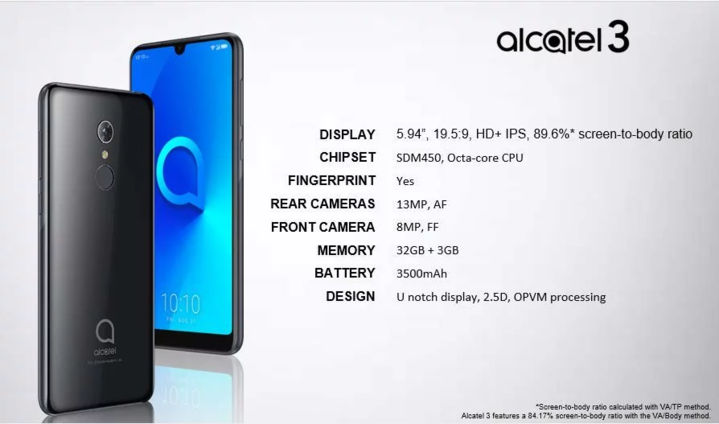 Alcatel 3, on the other hand, will pack a 5.94-inch HD+ display with a U-shaped notch, 19.5:9 aspect ratio, and 89.6 percent screen-to-body ratio. It’ll have Snapdragon 450 ticking at its core, paired with 3GB of RAM and 32GB internal storage. In optics, the phone could rock a 13-megapixel sensor on the rear and an 8-megapixel shooter on the front for selfies. A 3,500mAh battery is likely to fuel the device.

Last in the list are the Alcatel 1v and Alcatel 1s. They are expected to be entry-level offerings with 5.5-inch 18:9 displays. The Alcatel 1v will be an Android Go (Pie edition) smartphone with basic 1GB RAM and 16GB internal storage. It’ll rock octa-core chipset of unknown maker under the hood. In the camera department, the phone is likely to employ an 8-megapixel camera (interpolated to 13MP) on the back and a 5-megapixel camera (interpolated to 8MP) with its own LED flash up front. The phone is also said to have a rear-mounted fingerprint sensor and a 2,460mAh battery. 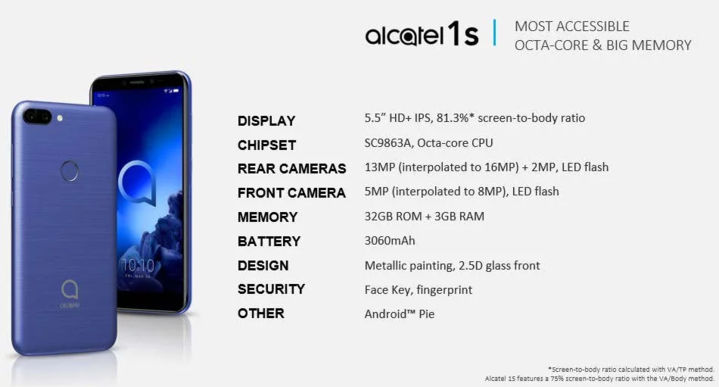 The Alcatel 1s, meanwhile, will have Spreadtrum’s SC9863A 1.6GHz octa-core (Cortex-A55) processor ticking at its core. It’ll reportedly be shipped with 3GB of RAM and 32GB internal storage. For photography, the phone is said to sport dual 13-megapixel + 2-megapixel sensors on the rear and 5-megapixel shooter on the front – both of them backed by a LED flash. Other features include 3,060mAh battery, Android Pie OS, and face unlock as well as a fingerprint sensor.

While we have all the specifications and features of the Alcatel phones, we’ll have to wait for the official announcement at MWC 2019 for the prices and availability details of the phones.