Alienware needs no introduction and for decades, the company has churned out top-notch, enthusiast-grade gaming laptops under Dell’s umbrella. Fast-forward to 2022 and the brand still retains its captivating charm, with the company’s offerings befuddling the competition with exquisite designs and stellar performance chops. Case in point, the Alienware X15 R2 which – spoiler alert – is quite possibly the best gaming laptop that has come to my desk to date. That’s not to say that the device is perfect. But, having spent almost two weeks with the unit, the negatives are far and few in between. Read on, to find out what makes the X15 R2 stand out.

Alienware knows a thing or two about designing good-looking laptops and the X15 R2 echoes the brand’s proficiency in this regard too. To be clear, the company is sticking to the ‘if it ain’t broke philosophy’ and the latest entrant draws a lot of parallels to the M-series of machines – in particular, the Alienware M15 R3 we reviewed almost two years ago. That said, the company’s design ethos has aged like fine wine and the brand has tweaked some visual elements which make the X15 R2 a tad easy on the eyes. 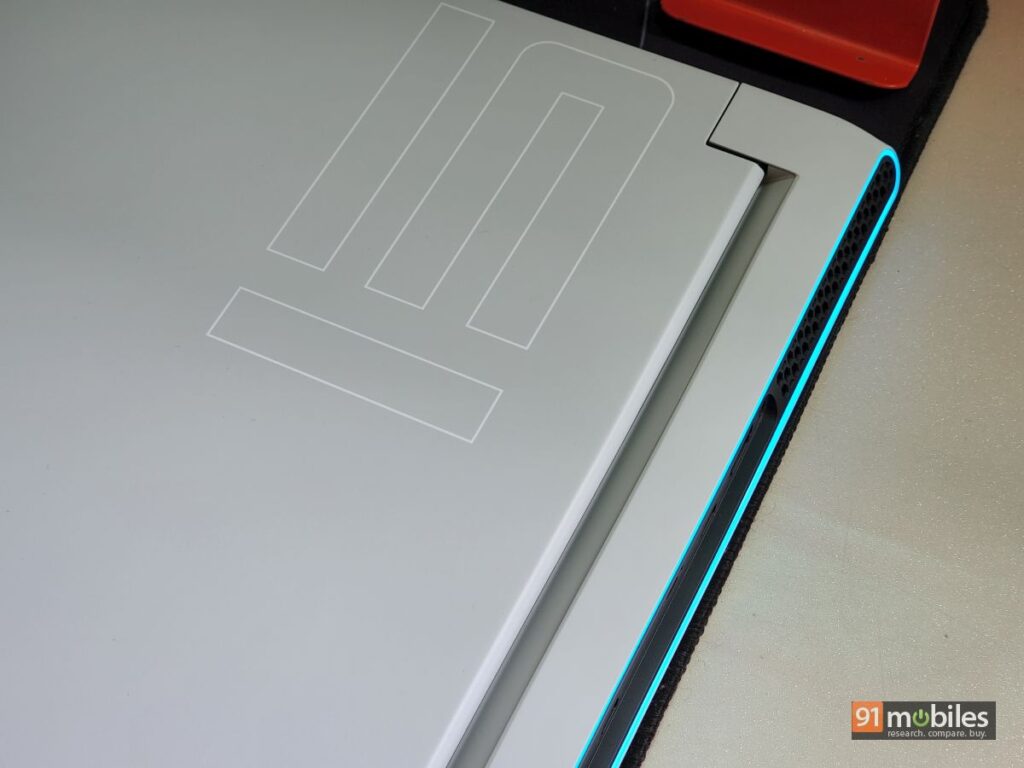 To wit, the X15’s chassis doesn’t ship with a two-toned finish and as a result, the device’s design doesn’t scream for attention. In fact, you could even pass the machine off as a work laptop, provided you turn off the RGB plastered on the lid, as well as the back of the device. What’s more, although the X15 R2 has been constructed in its entirety out of plastic, the device doesn’t feel cheap or flimsy. On the contrary, I was quite happy with the unit’s robust construction and the device’s chassis wasn’t susceptible to flex either, which is great. I should also add that the laptop is enveloped in a matte finish, which feels smooth to the touch too. 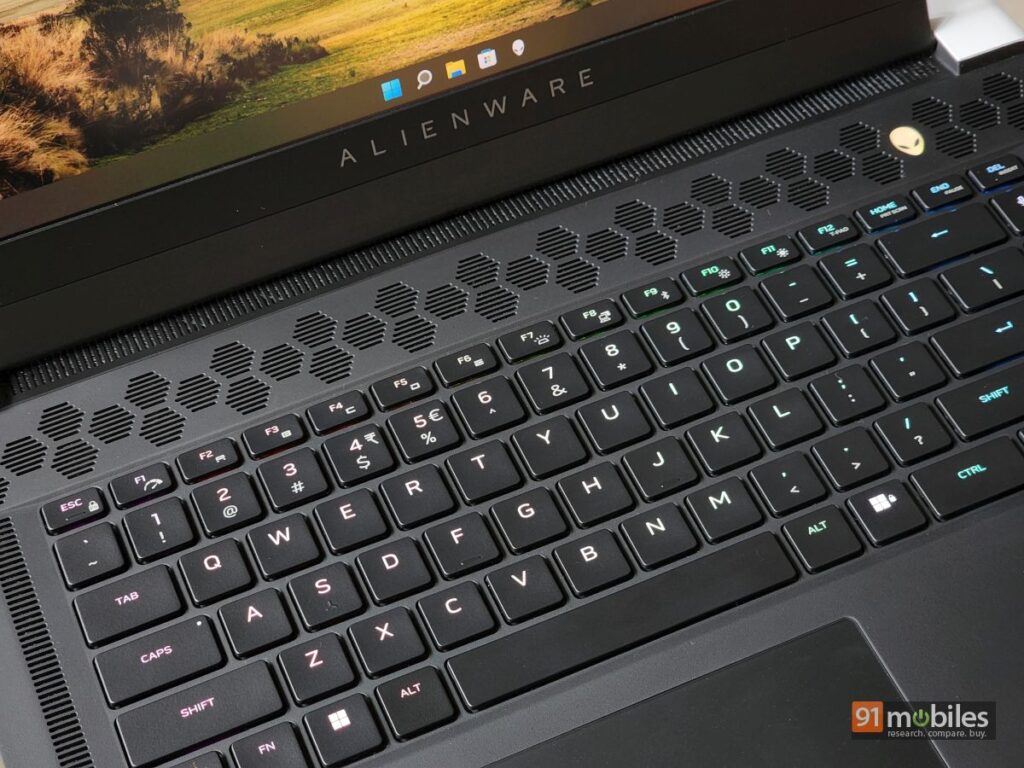 The tastefully positioned RGB LEDs deserve a mention as well, and the laptop’s lighting sets the mood for when you want to embark on your next in-game quest. The icing on the cake is that you can seamlessly tweak the laptop’s RGB effect by heading on over to the Alienware Command Centre app and accessing the FX tab. The device comes with a bunch of lighting presets, however, you can fine-tune various aspects of the theme and opt to change or blend the colours on the logo to that on the rear vent as well. 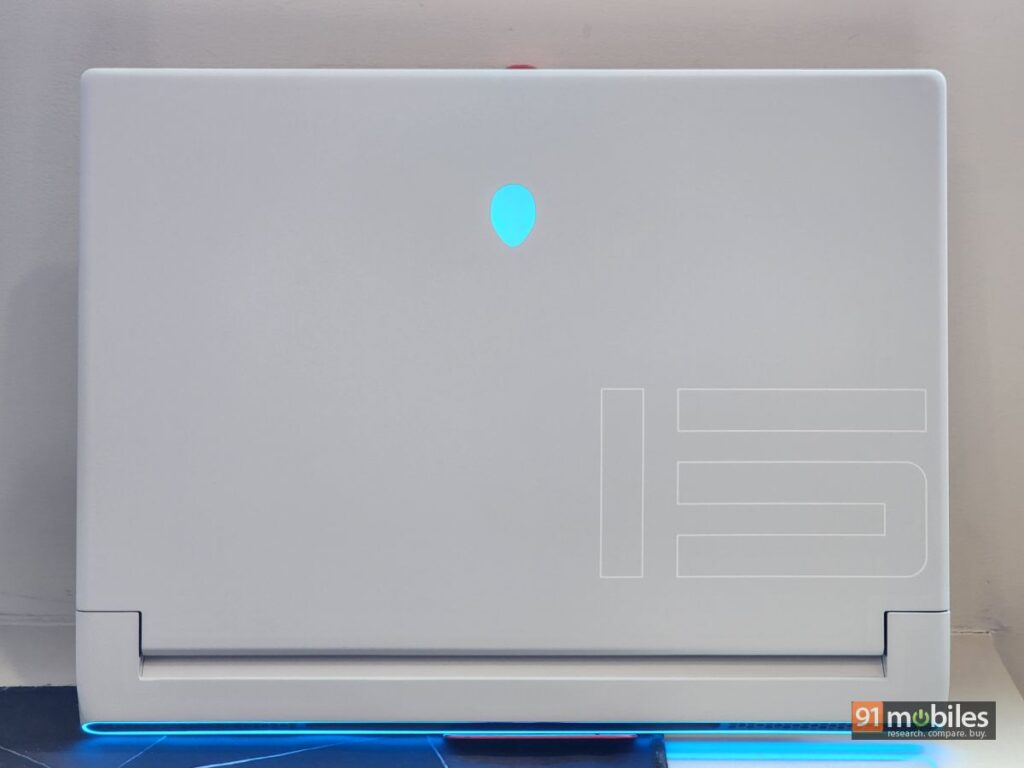 The laptop’s design is flush with character and the company has even stylised the rear vents in a honeycomb pattern, which is a nice touch. The same goes for the ‘15′ etching on the lid, which corresponds to the laptop’s size and adds a bit of flair to the laptop’s otherwise monochromatic lid. What’s more, the device is reasonably portable too and the laptop tips the scales at just 2.36 kilos, which is great. 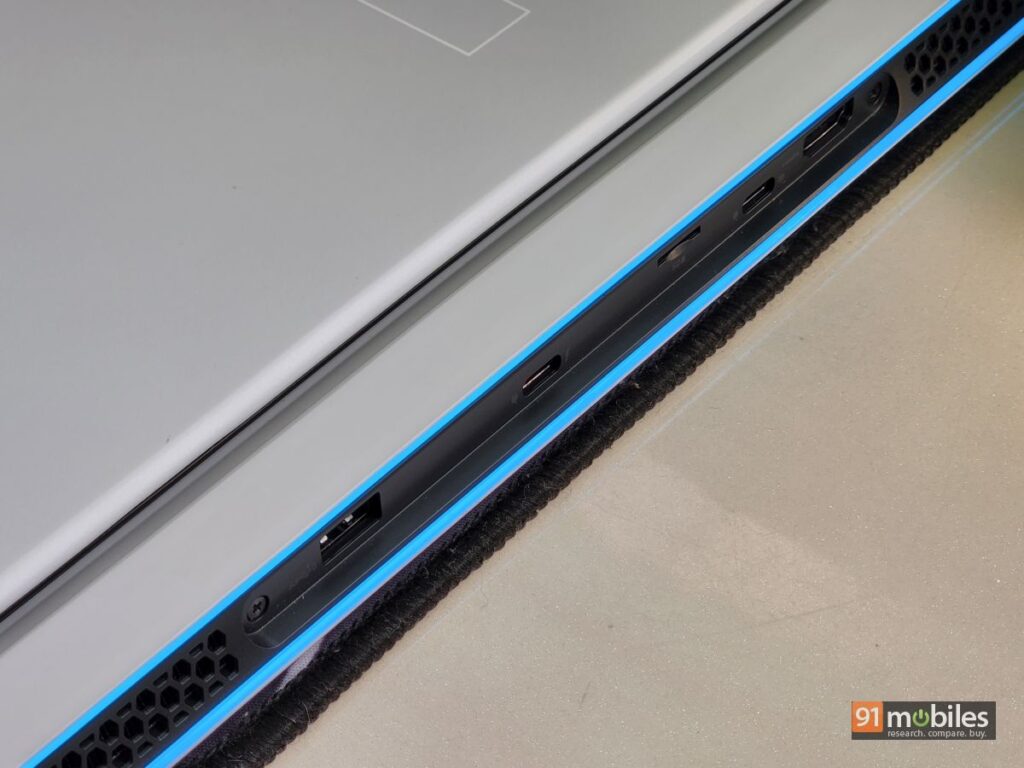 The port selection, on the other hand, could’ve been better. I say this, as the machine features only a single USB Type-A connector which severely limits the number of accessories you can dock to the unit. The rest of the I/O includes a USB Type-C 3.2 port and a ThunderBolt 4 compliant USB Type-C connector, both of which support USB PD as well. The device also ships with a headphone jack, a barrel-style power connector and an HDMI 2.1 port. Interestingly, most, if not all of the connectors have been positioned towards the back of the unit and therefore, you’ll be able to route all the cables seamlessly should you dock the laptop. 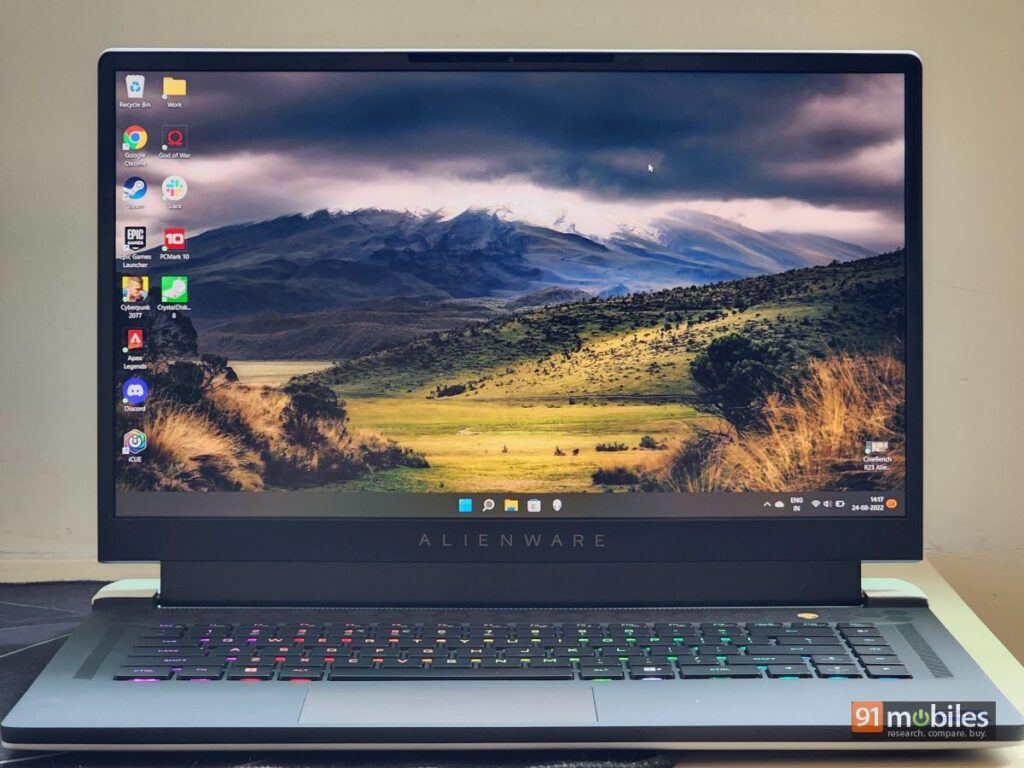 Moving on, the Alienware X15 R2 features a 15.6-inch, Full HD LCD panel that refreshes at – wait for it – 360Hz. Unsurprisingly, I had a gala of a time using the laptop on the go – the UI animations felt slick and sifting through PDFs felt less of a chore. What’s more, the panel’s viewing angles were to my liking as well and the screen got adequately bright too. That’s not all, as the panel is compliant with Nvidia’s G-sync too, so you’ll rarely run into instances of screen-tearing when playing your favourite games on the set. I should also add that the laptop is perfectly capable of running esports games at extremely high FPS, thereby ensuring you can make the most of the display’s sky-high refresh rate as well. If anything, I wish the company would’ve sold the machine with more display configurations in India. As things stand, you can only pick up the FHD spec from Dell’s website, which should get the job done, albeit it will leave consumers looking to trade FPS for high-fidelity gaming wanting for more.

Alienware has outfitted its latest offering with a spacious keyboard deck too. The device features the company’s X-series thin keyboard with per-key lighting that can be configured via the brand’s Command Centre app. The keys offer a satisfactory travel of 1.5mm and the key caps don’t wobble when you rest your fingers on them either, which is great. I should also add that the keyboard offers NKRO and correspondingly, the device will pick up on all your key taps accurately. 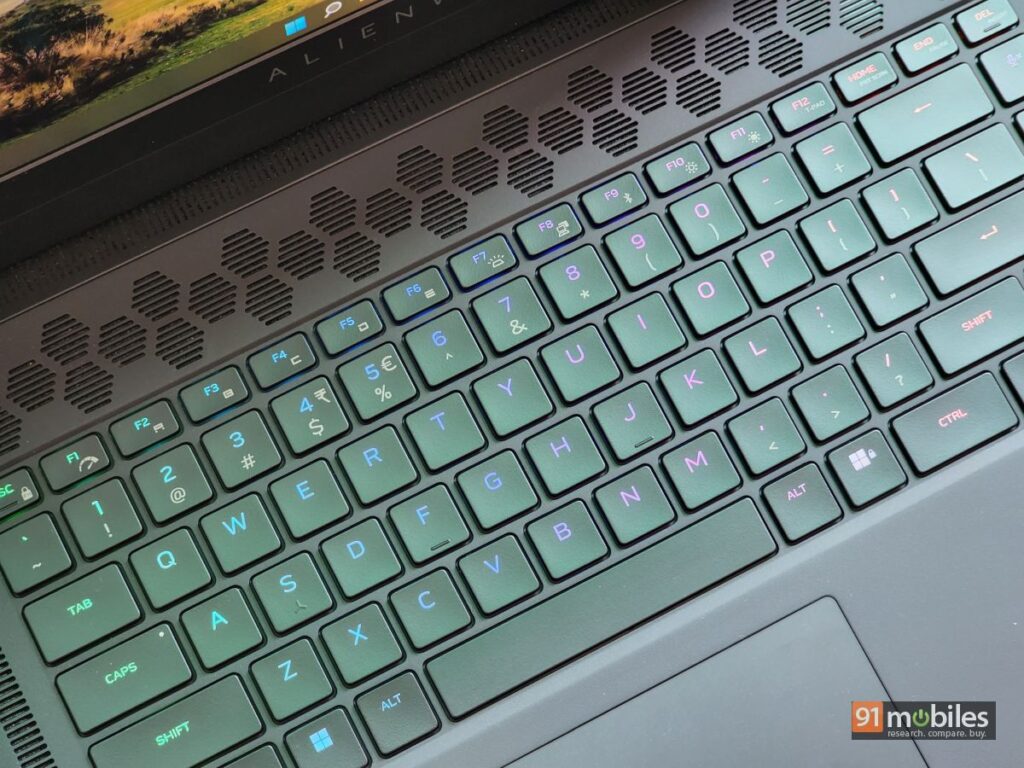 Truth be told, I didn’t get much use out of the X15 R2’s trackpad during my stint with the machine as I was using a gaming mouse with the laptop. However, you’d be glad to know that the trackpad supports gesture-based inputs, offers a smooth surface for your fingers to glide on and touts reasonably precise tracking. The unit offers a generous touch surface too and as such, will suffice for when you want to get work done on the go. The same goes for the laptop’s audio setup as well and the X15 R2’s stereo speakers get adequately loud and don’t distort or crackle at high volume levels either. 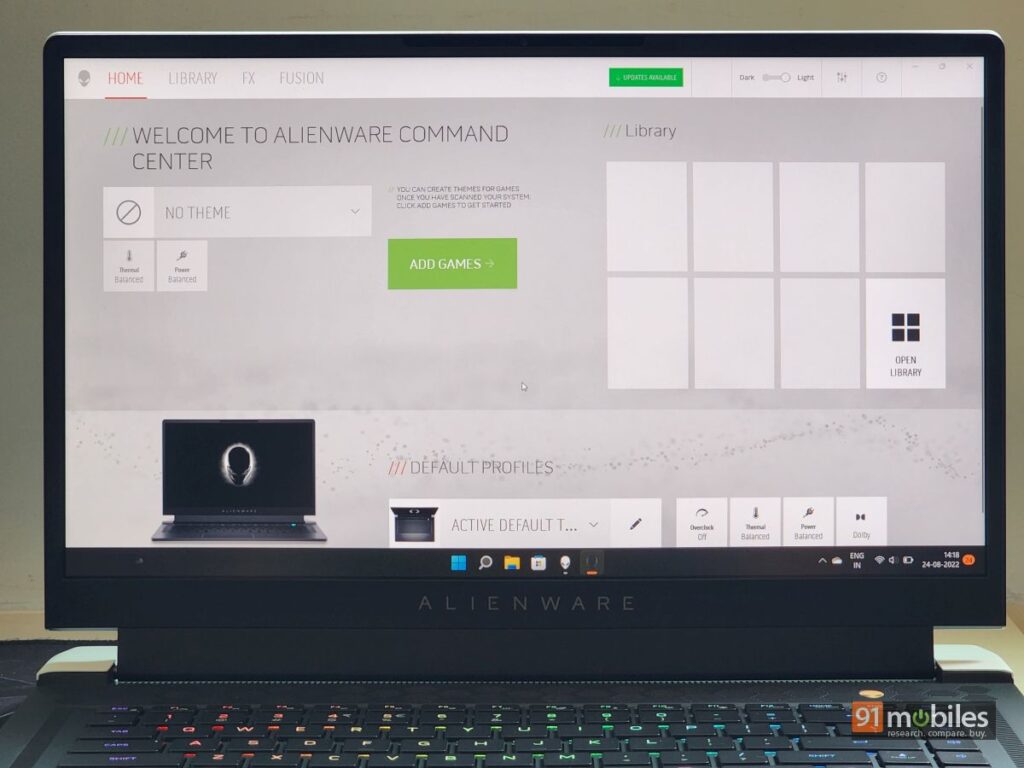 To no one’s surprise, the Alienware X15 R2 is a powerhouse of a laptop and the device comfortably breezed through my workload, which involves using apps like Adobe XD, Chrome, Excel and Slack. Now, fret not – I did spend a good chunk of my review period playing games on the machine and subjecting it to several benchmarks. But, before I talk about the results, you should know that all the tests were conducted with the laptop’s power mode set to the ‘best performance’ preset. To further the laptop’s performance, I switched to the ‘performance’ preset in the Alienware Command Centre app as well. Do note that I didn’t toy around with the overclock settings, as the laptop performed admirably regardless. However, you can look into the presets if you want to squeeze even more computing out of the machine. 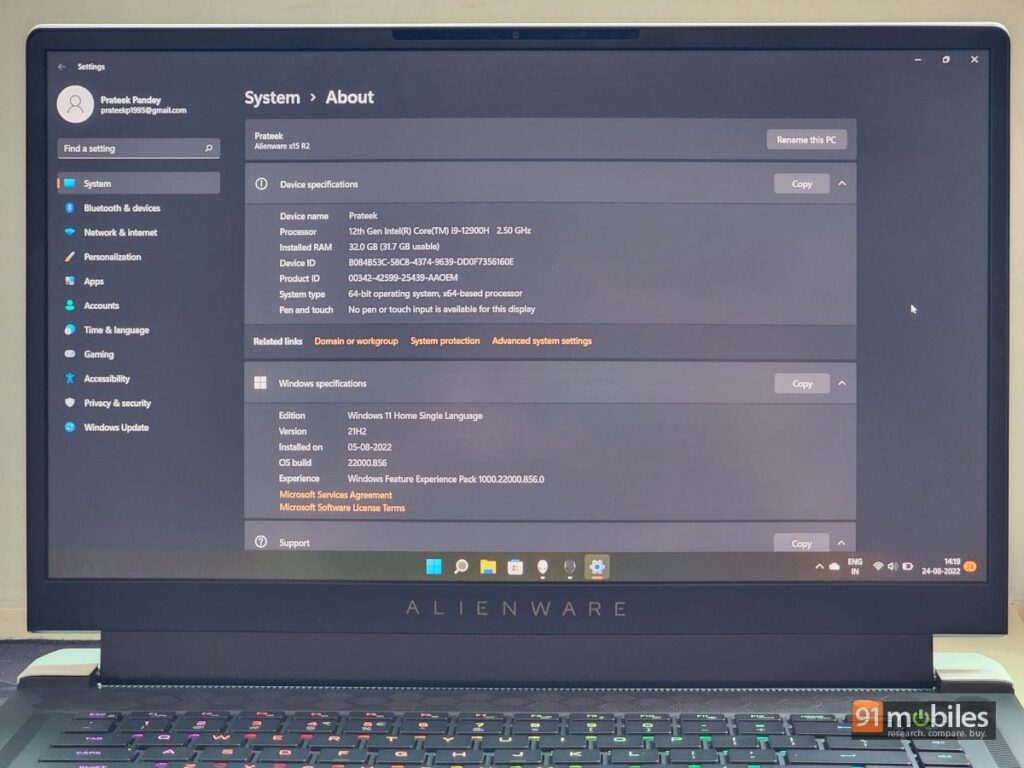 Starting with synthetic tests, the laptop overturned extremely rapid sequential read and write speeds of 6,803MB/s and 5,220MB/s in CrystalDiskMark utility. Understandably, the device ships with a fantastic SSD that should keep your boot times to a minimum. What’s more, the Core i9-12900H chip came in clutch in the Cinebench R23 benchmark wherein, the device’s six P-cores and eight E-cores worked in tandem to churn out a multi-core score of 14,452 points. During the test run, I noticed that a couple of P-cores turbo-ed all the way up to 5GHz, which goes on to show that Alienware is not limiting the CPU’s performance in the slightest. Rounding off the benchmarks, the device net 7,509 points in PCMark 10, which is on par with other competing machines as well.

Turn the page over to gaming and you’ll get a similar result. Apex Legends, for instance, nets 144FPS and that’s with all of the settings maxed out. The scenery remains unchanged in Cyberpunk 2077 wherein, the laptop comfortably churned out 70-80FPS with most, if not all of the graphics preset set to Ultra or High. Do note that turning on Ray Tracing will bring down the in-game FPS significantly. In fact, at the lowest RT preset, I was netting around 40FPS, which isn’t too shabby albeit isn’t great either. Moving on, God of War nets over 60FPS consistently with all the graphics settings set to either the Ultra or the Ultra+ preset. The in-game FPS doesn’t tank during intense battles either, so you can wreak havoc with the blades of chaos without running into any lag or stutter on the device. 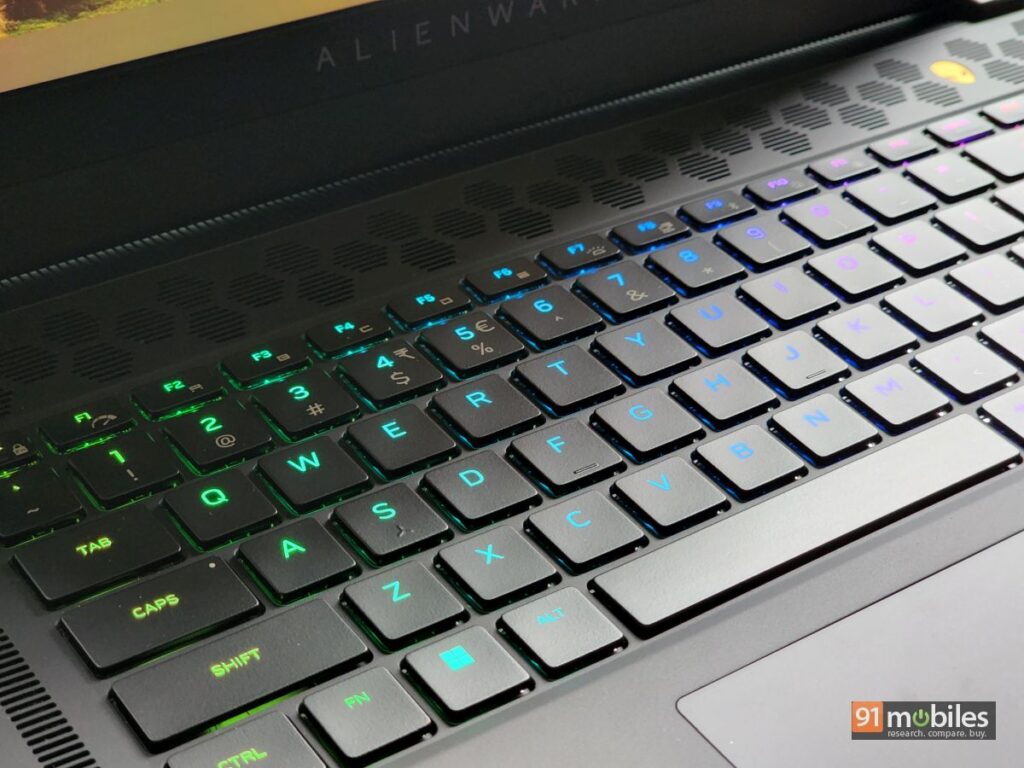 The icing on the cake is that the laptop doesn’t heat up all that much when running games for extended periods either. The same can be accredited to the unit’s quad fan design, along with the company’s proprietary Element 31 thermal interface material which, per the brand, betters the unit’s thermal resistance by up to 25 percent. And, the proof is in the pudding too. In fact, I routinely played Apex Legends on the machine for well over an hour and even had discord running in the background to communicate with my teammates. Despite that, I never saw the CPU or GPU temp exceed 97 degrees celsius. On the flip side, the fans can rev a tad too loud so you’ll have to plug in a pair of headphones to drown out the noise. What’s more, the unit’s battery backup leaves something to be desired and I could barely squeeze four hours of use out of the laptop. That’s not all as the unit’s ‘compact’ 240W charger is still fairly chunky and it will eat up precious space in your backpack.

The Alienware X15 R2’s pricing is not for the faint of the heart. In fact, as configured, my review unit will set interested buyers Rs 3,68,190 back. Be that as it may, you will have to pay a pretty penny for most, if not all other gaming notebooks that come equipped with similar specs. More notably, the laptop delivers across all fronts and features a stylish design, a stunning screen and extremely powerful innards that will breeze through demanding AAA titles for the foreseeable future. All said and done, the Alienware X15 R2, albeit expensive, is one heck of a gaming laptop and the device will not disappoint power users or hardcore gamers in the slightest.