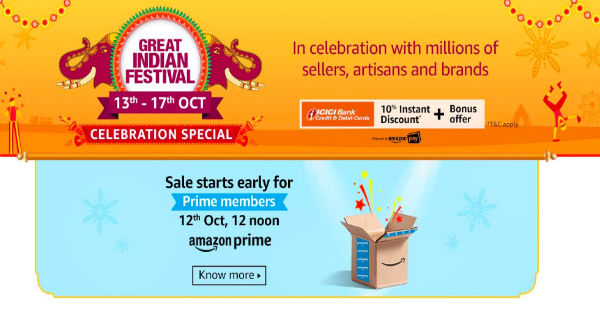 The Amazon Great Indian Festival 2019 sale has been announced by the e-commerce giant yet again. The sale would kickstart on October 13th and will last until October 17th, while Prime users get exclusive early access on October 12th at 12pm. This announcement comes just a few days after the Great Indian Festival sale ended. The sale brings around 40 percent off on smartphones, up to 60 percent off on home appliances such as TVs, claims rock bottom prices on top consumer electronics and great deals on Echo and Alexa devices.

Apart from deals, Amazon is offering free screen replacement on a wide range of smartphones, exchange offers, No cost EMI and more. OnePlus 7T, Samsung M30s and Vivo U10 are said to be up for grabs with “irresistible offers.” Deals will apply to brands like Apple, Xiaomi, OnePlus, Samsung, Vivo, Honor, etc. It is offering over 6,000 deals on around 200 top brands including HP, Canon, boAT, Lenovo and more.

Amazon is also having offers on laptops, headphones, speakers, cameras, fitness trackers, and smartwatches. Amazon will be offering a special price on Echo Dot along with a free smart bulb and top offers on Echo Show 5, Fire TV Stick, the new Kindle, and more.

As a part of the sale, Amazon is offering a 10 percent instant discount for ICICI Bank debit and credit cardholders, no-cost EMIs on Bajaj FinServ card as well as debit cards, along with unlimited reward points on Amazon Pay ICICI Credit Card.