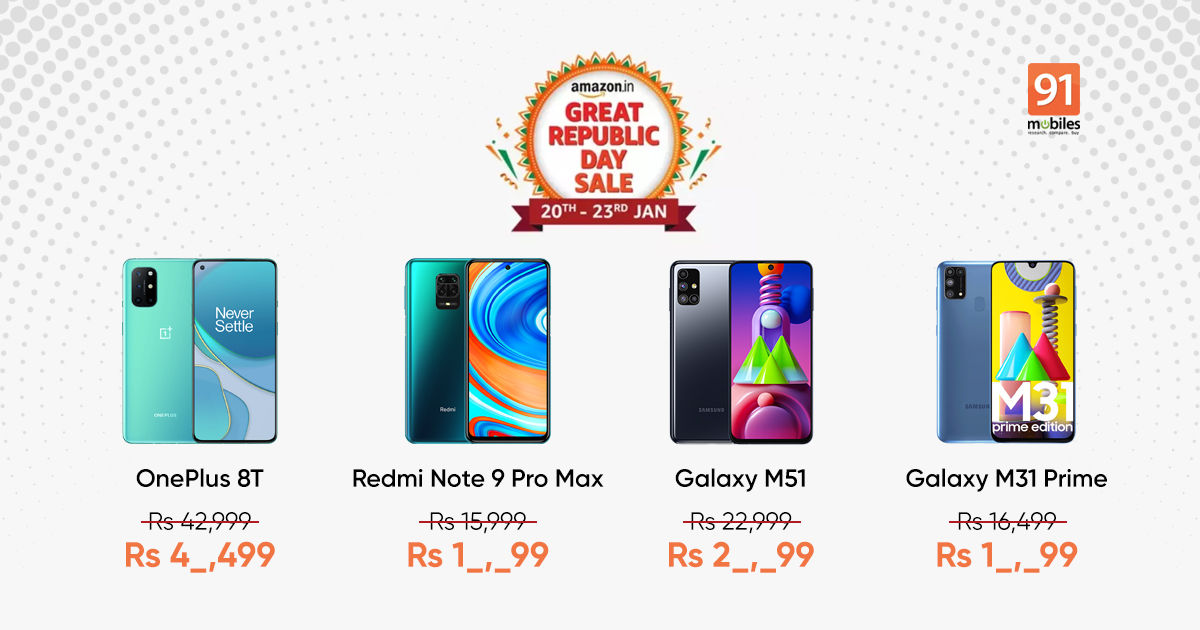 Amazon Great Republic Day sale date has been announced by the e-commerce titan. The next Amazon sale will kick off on January 20th and will last until January 23rd, with Prime members getting early access on January 19th. The company has not specified what time the sale will begin, but we can expect it to start at 12pm. The Amazon sale will bring discounts and deals on various categories, including electronics, smartphones, home appliances, fashion, and Echo range of products, among others. While the exact price discounts aren’t revealed yet, popular phones like iPhone 12 mini, OnePlus 8T, Samsung Galaxy M51, Redmi Note 9 Pro Max, Samsung Galaxy M31 Prime, OPPO A31, Nokia 5.3, and will be discounted during the upcoming Amazon sale. The e-commerce giant is also offering a 10 percent instant discount with SBI credit cards. Amazon sale discounts on mobile phones and other electronics

The Amazon sale will be offering up to 40 percent discount on smartphones and accessories, up to 60 percent on laptops and other electronics, up to 60 percent off on TV and other appliances, and 40 percent discount on Amazon products. Mobile accessories, including power banks, headset, cases, and covers will start at just Rs 69. The company also says there will be new launches during the upcoming Great Republic Day sale.

The company is teasing that the iPhone 12 mini, OnePlus 8T, Samsung Galaxy M51, Redmi Note 9 Pro Max, and Samsung Galaxy M31 Prime will be among the phones that will be on discount during the Amazon sale. Other smartphones on offer during the upcoming sale will be Samsung Galaxy M31s and M21, iPhone 7, Redmi Note 9 and Note 9 Pro, OnePlus 8 Pro, OPPO A31, and Nokia 5.3. While the smartphones that will be on discount have been revealed, the company has not announced the discounted sale prices yet. However, going by the past few sales, we can expect those prices to be revealed over the next few days.

Interestingly, the banner for tomorrow’s Samsung Unpacked event is also listed on Amazon. The Samsung Galaxy S21 series is expected to launch at the event and the flagships are already listed on Amazon and Flipkart. However, the banner image on Amazon doesn’t specify whether the phones will be available for purchase during the Amazon sale.