El Goog’s platform for wearables, Android Wear is still in the toddler phase, but it’s getting updates on a regular basis, making it more useful for devices on our wrist. Now, it’s set to receive the biggest refresh yet in the form of the Lollipop update, bringing it at par with the latest Android version on mobile devices. Although, there’s no official info as to when the update will hit Android Wear-based watches, Phandroid has managed to post some screenshots which show off what we can expect from this update. The good thing is that the update will not only bring a visual redesign to the interface, but also add a lot of much-needed functionality to the OS.

First up, Android Wear’s companion app running on connected smartphones will get a new update. Not only it will don the Material Design language, but will also offer numerous features. Prime amongst them is the ability to get a granular view of smartwatch’s battery. This will give you an indication of the apps guzzling battery on the watch. You will also be able to view the storage statistics of the device, which is quite useful, especially since Android Wear now gives you the ability to store and play music from the device itself. Another important feature in the app would be the option to change watch faces without resorting to a third-party app.

Google has also introduced the watch face API, which means that the weather information can now be displayed on the watch face itself. This removes the need to scroll down to the weather card available through Google Now. The settings option will also give you the ability to customise the watch face. Here’s a peek at some of the new watch faces as well as the weather icons expected with the forthcoming update. 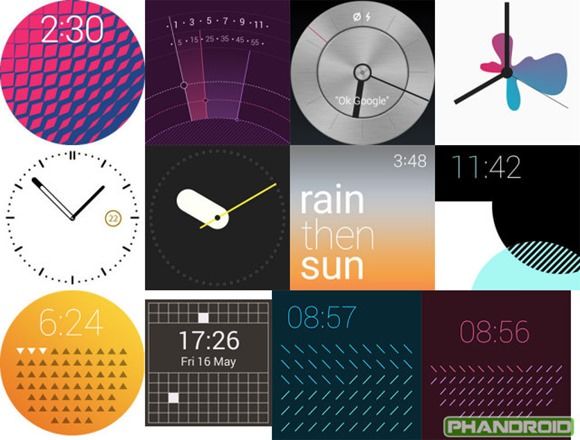 The update will also make it easier to switch the brightness of the display with two more modes. This is important as all Android Wear-toting watches don’t come with ambient light sensors, and it becomes frustrating to increase the brightness level quickly since the option is hidden deep into the settings. However, with the introduction of the new Theater and Sunlight modes, it becomes easy. Earlier, when you swiped down, you were only able to see the battery status and mute the device, but now you will also see these two new brightness modes along with settings menu when you swipe right or left. The Theater mode switches the screen off, until you press the hardware button or double tap the display, whereas Sunlight mode makes it easy to view the display outdoors.

With the update, Android Wear will offer numerous accessibility options, making it easier to use to the visually impaired. Users will be able to turn on large text, colour inversion and magnification gestures.

Last, but definitely not the least, is a small-but-useful change to the action menu, which is displayed when you tap on the display. Instead of showing you Google voice search followed by various options, now all the actions will be sorted by most-recently used features.

The improvements seem really interesting and they will certainly enhance the user experience. We’re definitely keeping an eye out for the update to arrive soon, which might be as soon as next month.