A few days after the release of iOS 16.1.1, Apple has now released iOS 16.1.2. The latest update offers a few minor upgrades over the previous one and weighs between 250MB and 350MB. According to Apple, the iOS 16.1.2 update brings enhanced carrier compatibility as well as optimised Crash Detection for the iPhone 14 and iPhone 14 Pro models. Here’s an explanation of what the iOS 16.1.2 update will offer. 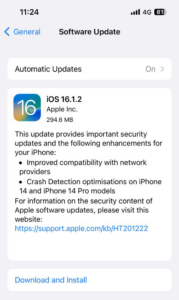 As per Apple, the most recent iOS update enhances network provider compatibility. The update also fixes the Crash Detection feature, which is available only on the iPhone 14 series.

The Emergency SOS via satellite system can send Crash Detection messages to emergency services when users are outside of cellular and Wi-Fi coverage on their iPhone 14 or iPhone 14 Pro.

Crash Detection optimisation may include enhancements to prevent iPhone 14 models from alerting emergency services while riding rollercoasters and other similar rides.

Recently, a few amusement parks reported incidents where roller coasters accidentally triggered Apple’s Crash Detection feature because of the abrupt turns and motions. At least six times in the Kings Island amusement park in the US, the roller coasters accidentally set off Crash Detection. On the other hand, Dollywood experienced more of these incidents and posted signs requesting visitors refrain from bringing electronic gadgets on rides. Recently, an incident of activation of crash detection while skiing was reported in the US.

iOS 16.1.2 update: How to download the new Apple iOS update?

To download and install the new iOS 16.1.2 update, users need to go to “Settings,” then “General,” and then “Software Update”. Users are recommended to back up their data before applying the new patch, despite the fact that it is a minor update. Users should be able to use a backup to restore all their data if something goes wrong during installation. Both mobile data and Wi-Fi connections can be used to apply the update.

Upcoming iOS 16.2 update: What to expect?

The upcoming iOS 16.2 update will likely come after iOS 16.1.2. It will be a significant one because it includes new features like a new Home app architecture and a new Freeform app and makes 5G capability for the iPhone available in India.

Apple has recently issued iOS 16.2 update in its beta channel. Therefore, it is not available for all users. With that, Reliance Jio and Bharti Airtel customers can use 5G in the selected areas where the telecommunications companies have launched the first wave of 5G connectivity.