“Here’s everything you need to know about the iPhone 6.”

Ever since the inception of the iPhone seven years ago, Apple has been hailed as an innovator on several fronts. Touchscreens (and more importantly, gestures like pinch-to-zoom), the App Store to download apps, a voice-activated assistant, 64-bit computing, biometric security and many other game-changers were pioneered by the Cupertino-based giant. Interestingly enough, its latest devices – the iPhone 6 and its bigger sibling, the 6 Plus, may not be the claimants to any industry firsts, but mark a number of firsts for the company itself. Before we get to the details in our review, we’re certain that you might have a number of questions about the iPhone 6. Here are the answers. 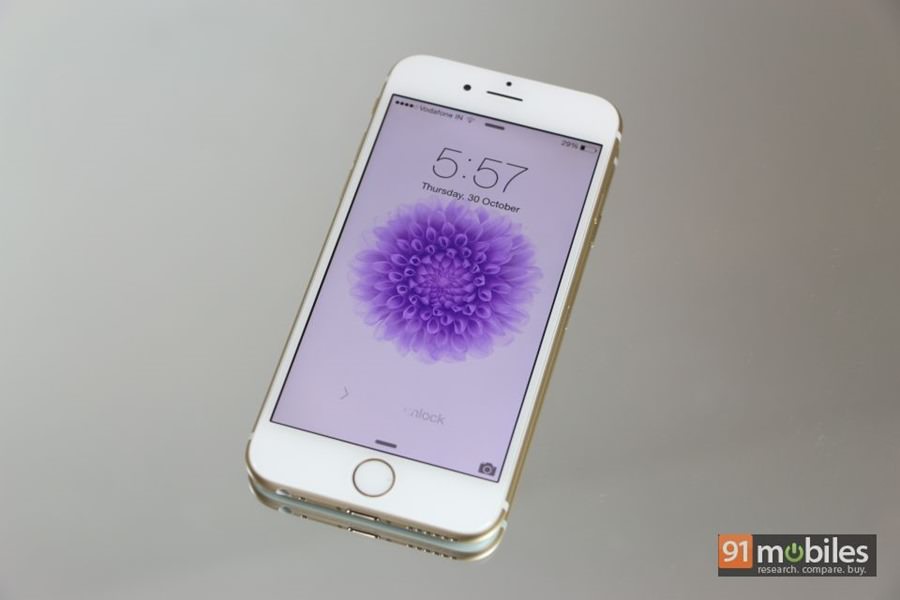 So, what’s the biggest change in the iPhone 6?

For years Apple had dismissed large-screen smartphones as a fad, but after seeing the market grow prodigiously, it has finally succumbed to the trend. The iPhone 6 bears a screen size of 4.7-inches, which is larger than its predecessor, which sported a 4-inch display panel. Its sibling, the iPhone 6 Plus is even bigger, catering to the phablet audience with its 5.5-inch display. The iPhone 6 still offers a Retina display (326ppi), since the resolution has been bumped up to 1,334 x 750 pixels to accomodate the larger screen. The iPhone 6’s display also offers better a contrast ratio and wider viewing angles.

Can you give me a rundown of the iPhone 6’s complete specs?

Apple always promotes its products on the basis of superb user experience, instead of boasting about specs. But, for those interested, the iPhone 6 packs the latest-gen Apple A8 chip that’s 64-bit compatible and promises to deliver 25 percent better performance than the A7 chipset. The new chip also delivers up to 50 percent more efficient graphics performance. As per the benchmark apps, the A8 SoC offer two cores ticking at 1.4GHz, working in conjunction with a gigabyte of RAM. The SoC is also coupled with an M8 co-processor that tracks steps without draining the battery. The smartphone offers 16GB of storage in the base model. Powering it up is an 1,810mAh sealed battery.

How do the iPhone 6 and iPhone 6 Plus differ? And how are they improved over the iPhone 5s?

The iPhone 6 and iPhone 6 Plus are remarkably similar, with the main difference being their dimensions. When compared to the last year’s iPhone 5s, there are a number of changes. We have discussed them in detail in our comparison post, but you can also quickly glance at the differences with this handy chart. 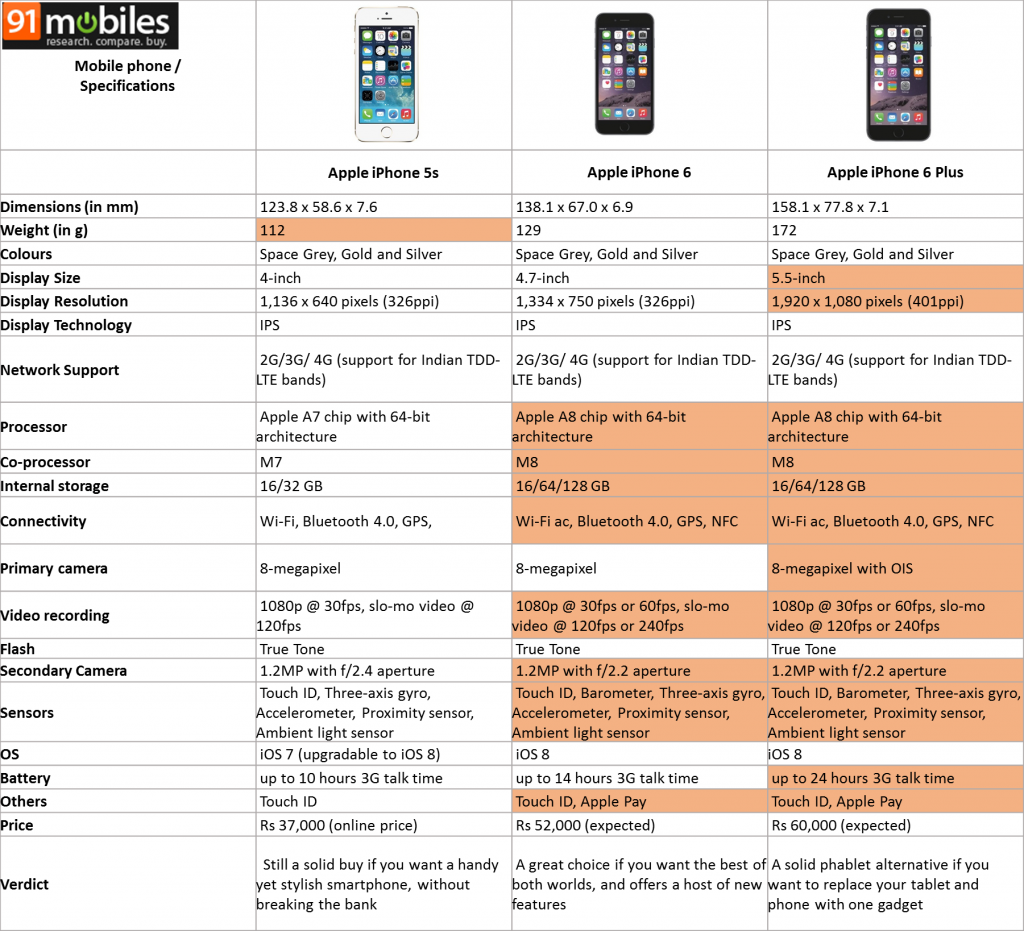 What’s inside the retail packaging of the Apple iPhone 6? 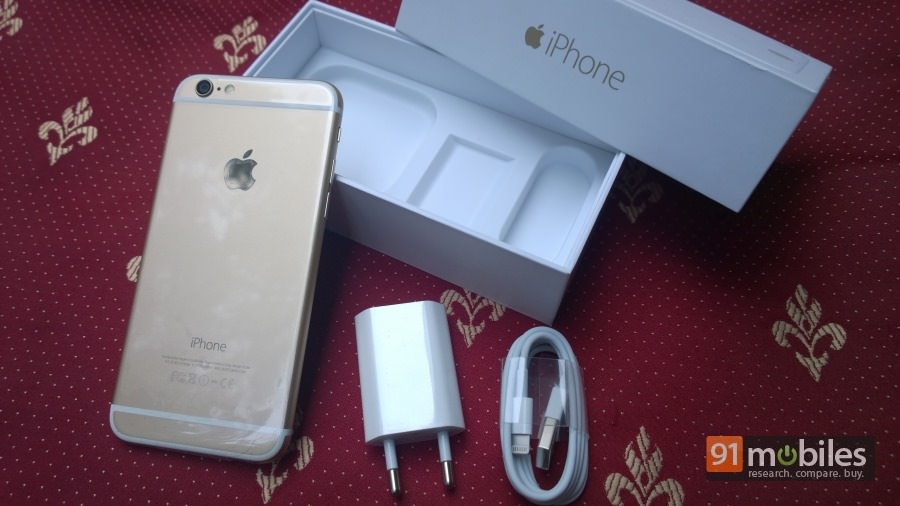 As our unboxing of the iPhone 6 highlighted, the sales pack of the device comes with the usual goodies which include a wall charger, a Lightning cable and a pair of stereo earphones.

How’s the build quality of the iPhone 6? In what colours can I purchase the smartphone? 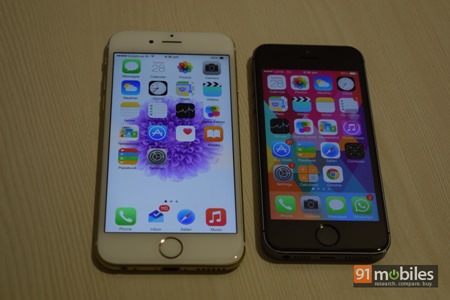 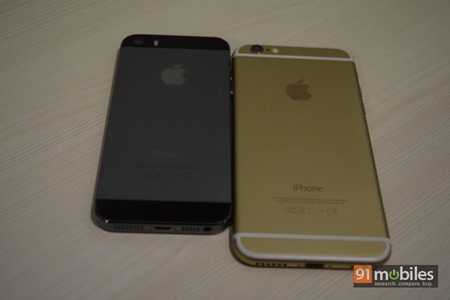 The new iPhone isn’t just bigger than its predecessors, it also bears a new design language. Gone are the chamfered edges and blocky design. Instead, the iPhone 6 gets curved edges and rounded corners, making the bigger device fit perfectly in the hand. The power button has also moved to the right spine to make it easier to access on the bigger frame. The aluminium construction of the device gives it a robust build quality. What’s more interesting is the fact that the new iPhone 6 is bigger, yet manages to be the thinnest in iPhone history, with its waistline measuring just 6.9mm. The device is also quite lightweight, tipping the scales at 129g. 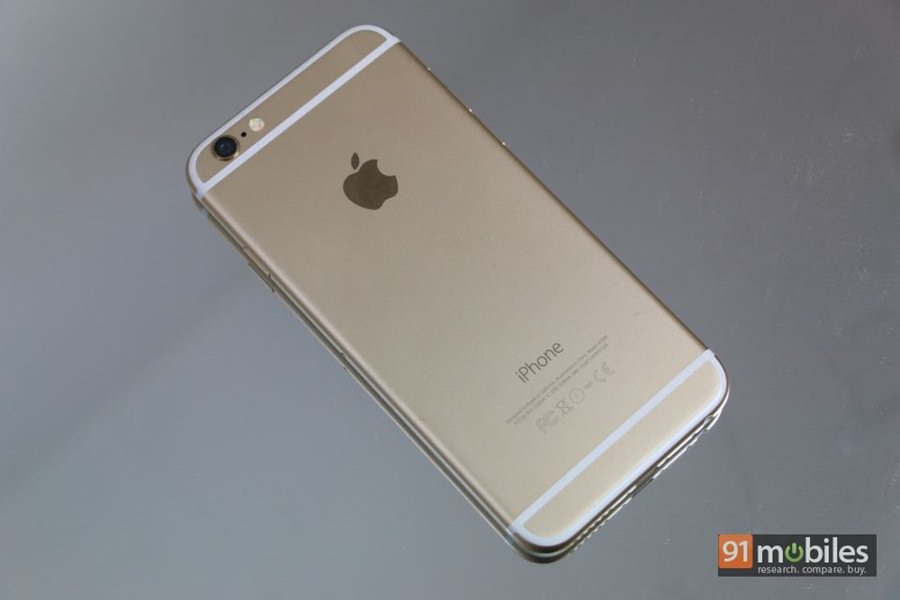 Just like the iPhone 5s, the iPhone 6 is available in Space Gray, Silver and Gold colour options. 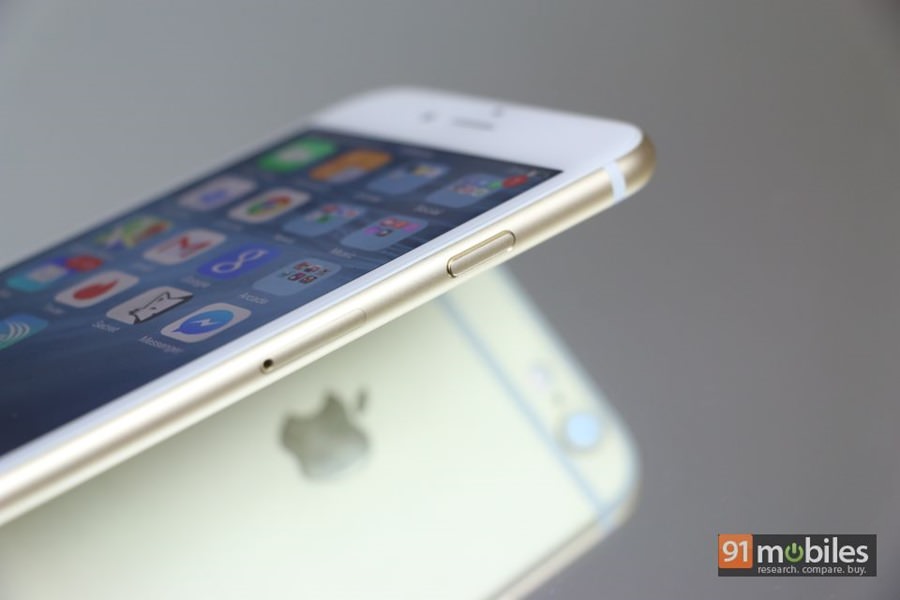 Does the Apple iPhone 6 use Sapphire Glass for the protecting the display? 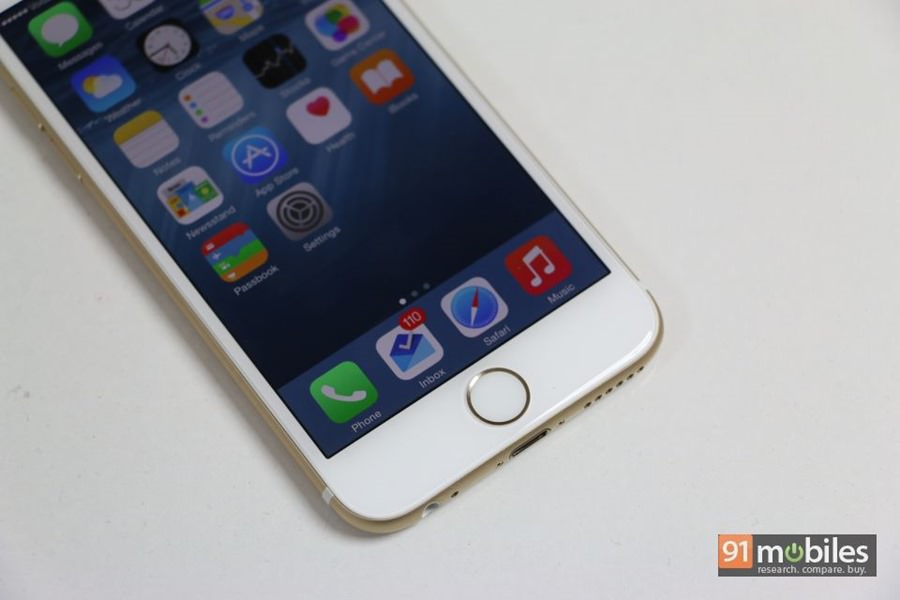 While the rumours were rife that Apple would opt for Sapphire Glass to protect the display of the iPhone 6, that’s not the case. Although the Cupertino brand has used the tougher Sapphire Glass over the home button and camera lens at the back, the display continues to be protected by a layer of Corning Gorilla Glass.

What kind of SIM card I can use with the iPhone 6? Does it support 4G connectivity in India? 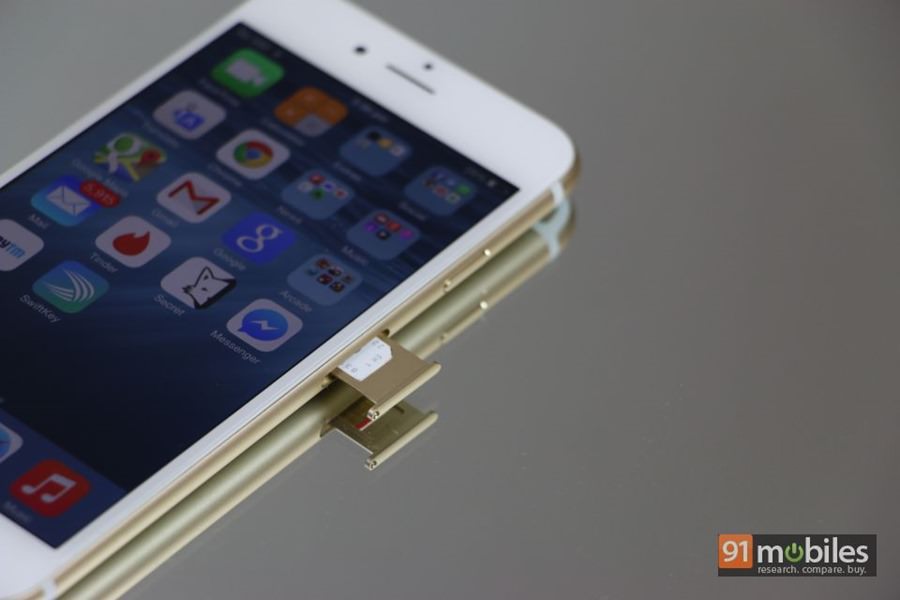 Apple was one of the first manufacturers to opt for nano-SIM cards and its latest also accepts the same SIM type. The Apple iPhone 6 scores full marks on cellular connectivity, since it supports Indian 4G networks, along with compatibility for 3G and 2G networks.

What other connectivity options are available in the iPhone 6?

In terms of wireless connectivity, the iPhone 6 supports Wi-Fi 802.11 b/g/n/ac, Bluetooth 4.1 and GPS. The device also has AirDrop which lets you share files between compatible iOS and Mac devices.

I heard that the iPhone 6 now supports NFC. Is it true?

Yes, the iPhone 6 supports Near Field Communication, but sadly it can’t be used for the usual purposes. NFC in the iPhone 6 is only useful for Apple’s new initiative called Apple Pay…

So what exactly is Apple Pay? Can I use it in India?

Mobile payments seem to be the next big thing, and Apple Pay aims to provide consumers with a seamless mechanism to make purchases. All you have to do is bring the iPhone 6 next to the Apple Pay terminal while pressing the Touch ID sensor, and you’ll be able to make a completely secure payment without even divulging your credit card number. Unfortunately, the feature is only available in select retail stores in the US for now, and Apple hasn’t stated if and when it will be launched in India.

What are the camera specs on offer in the Apple iPhone 6? Does it have optical image stabilisation? 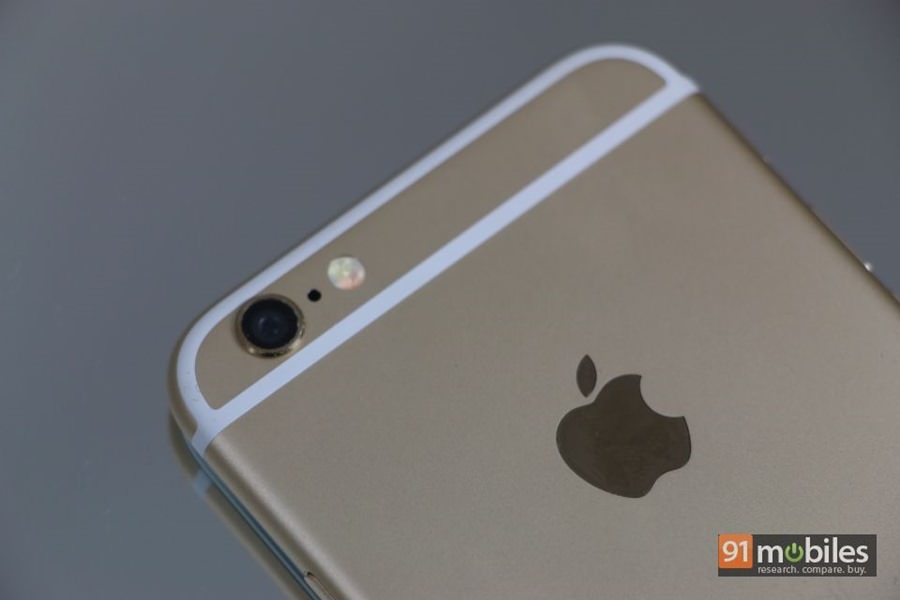 Just like its predecessor, the iPhone 6 comes with an 8-megapixel camera with an f/2.2 aperture and a 1.5 micron sensor. Apple claims that it’s using an enhanced sensor, and the iPhone 6’s shooter also has faster autofocus thanks to Focus Pixels, which uses phase detection technology to focus quickly on the subject. Supporting the shooter in poorly-lit conditions is a True Tone flash which has two LEDs, one in white and the other in amber. Up front, the iPhone 6 sports the same 1.2MP FaceTime camera for capturing selfies and making video calls.

Unfortunately, the OIS capability is reserved for the bigger sibling, the iPhone 6 Plus, and is not available in the iPhone 6.

How much storage is available in the base version of the iPhone 6? What other storage options are available?

Out of the 16GB of storage, users will be able to access around 11.4GB for installing apps as well as storing multimedia content. 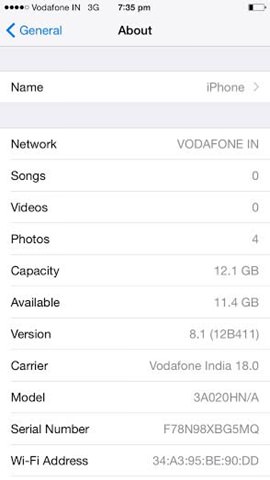 In case you need more storage, you can go for higher-priced variants available in 64GB and 128GB editions. Apple has decided to forgo the 32GB storage variant, which means there’s no middle ground between the 16GB and 64GB storage options.

Which OS runs on the Apple iPhone 6? What are its key highlights?

The iPhone 6 comes loaded with the latest iOS 8 (upgradable to iOS 8.1) which Apple is dubbing as the biggest update to iOS ever. It brings several features to the table, which we have highlighted in our iOS 8 overview. Some of the really interesting aspects are Handoff and Continuity, the ability to install widgets on the notification panel, interactive notifications, and support for third-party keyboards, among others. We’ll be discussing them comprehensively in our iPhone 6 review. Does the iPhone 6 have a one-handed mode? 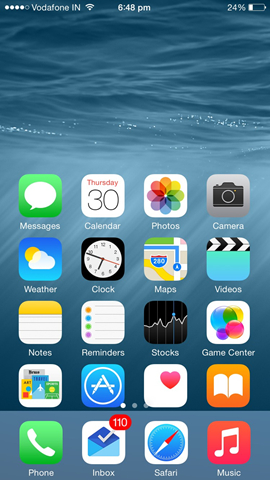 Yes, the Apple iPhone 6 does have a way to make single-handed use easier. Unlike many Android vendors that shrink the UI screen in the one-handed mode, Apple has made it intuitive to use the iPhone 6 with a single hand. All you need to do is to double tap the home button and it will shift the whole UI towards the middle of the display, allowing you to perform an action easily. The feature is dubbed as Reachability and works very smoothly to perform an action quickly.

Is Touch ID also available in the iPhone 6? 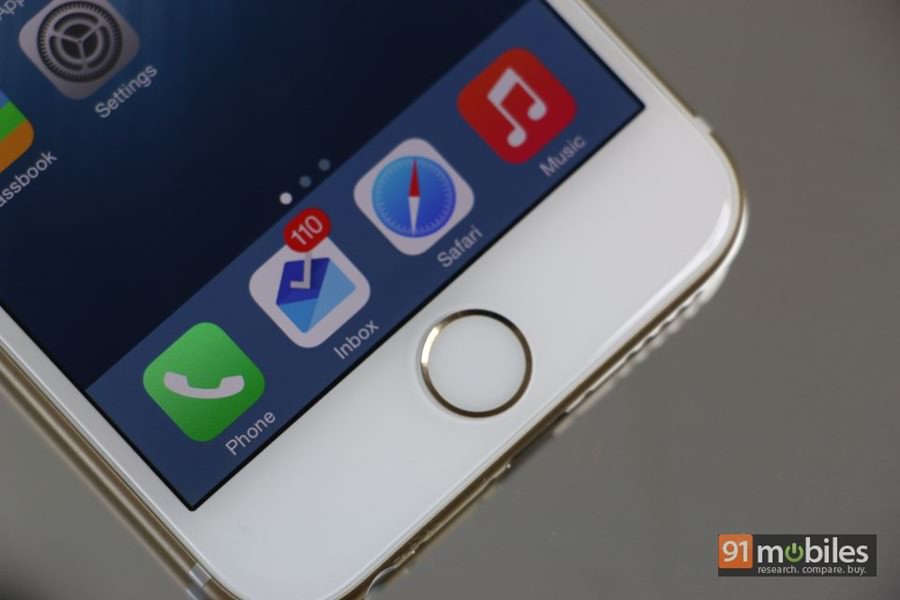 Yes, Apple started offering the fingerprint sensor as an additional security measure with the iPhone 5s, and it’s available in its successor as well. The fingerprint sensor is hidden well under the home button, and lets you unlock the smartphone and authorise purchases from the App Store.

What about Siri? Did it get any upgrades? 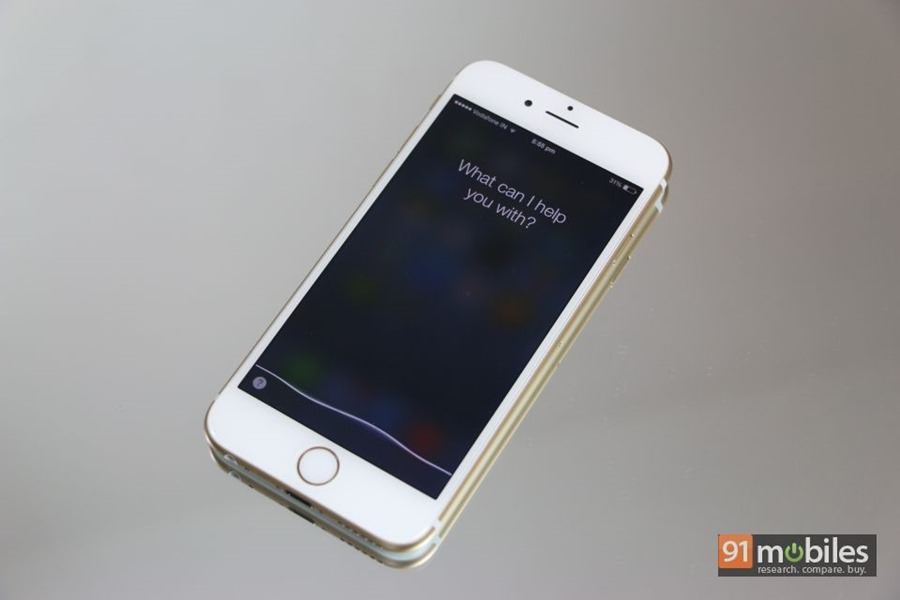 Apple has given some much-needed love to its voice assistant Siri in iOS 8. While it doesn’t have a true always-on listening mode like the Moto X (review | FAQs), you can activate it with the ‘Hey Siri’ hotword when the device is plugged in. Siri can also detect the song playing in the background thanks to integration with Shazam, with the command ‘What song is this?’.

So, will I need to sell a kidney to buy the iPhone 6? 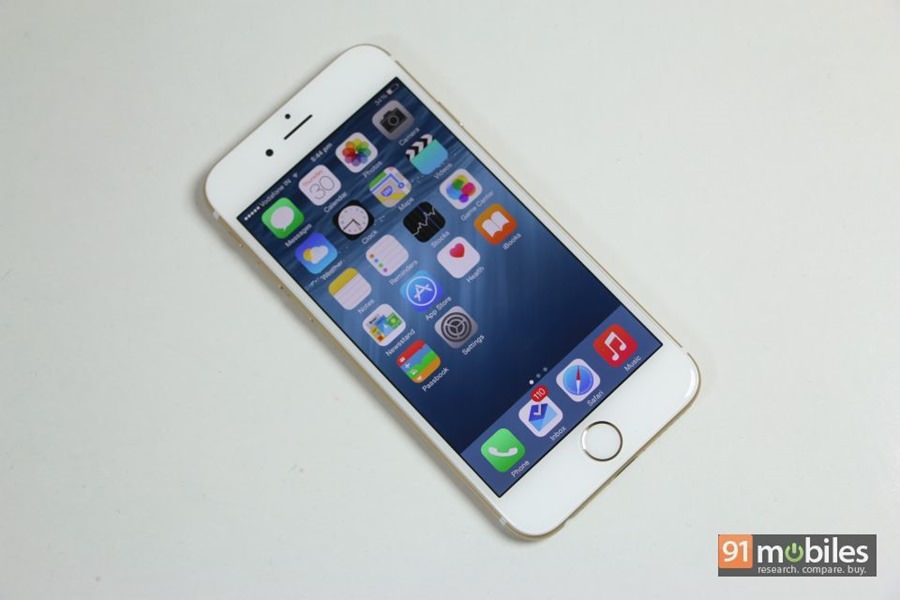 Flipkart exchange offer lets you buy the iPhone 6 for Rs 10,000, with a ridiculous caveat