Taiwanese electronics giant ASUS has been one of the most prominent names in the PC industry for a while now. A mention of ASUS laptops normally makes me think of the company’s gaming lineup of ROG devices first, but the brand has an extensive lineup for casual and professional users too. The ASUS ExpertBook B9 is built on Intel’s Evo platform and runs the latest 11th-gen CPUs. It claims to be one of the lightest 14-inch business laptops in the world and is priced starting at Rs 1,15,498. Now I’ve encountered a lot of ultrabooks during my time as a reviewer, but the ExpertBook B9 has grabbed my attention as very few products have before. Read on to know why in this full review of the device. 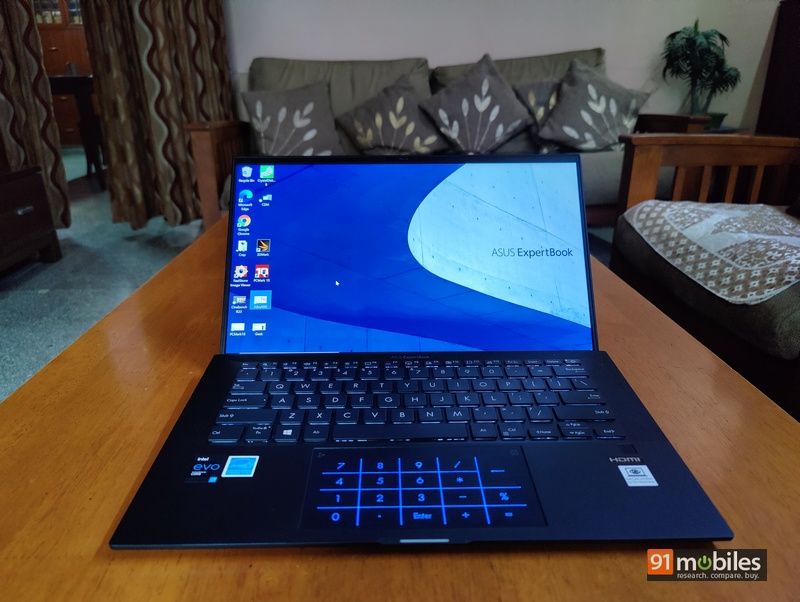 The ASUS ExpertBook B9 weighs a mere 880 grams. The previous-gen LG Gram 17 is the lightest laptop I had used so far, but this machine from ASUS easily trumps it. I can balance the ExpertBook B9 on one finger, it’s that light. The chassis is built from a magnesium-lithium alloy which facilitates the featherweight design. The light weight could translate into a flimsy or weak construction, but on the contrary, the ExpertBook B9 is as sturdy as it gets. It has even passed the MIL-STD 810H military-grade standards to withstand extreme weather conditions. At just 14mm, the laptop is also reasonably thin. ASUS has made use of its Ergolift hinge design which props the base of the laptop at an angle for better thermal flow and typing experience. It also creates a sound chamber at the bottom for a much louder speaker setup than the weight of the device warrants. The hinge allows the lid to be propped up at any angle up to 180-degrees in an extremely smooth motion. The lid can even be opened using just a finger without the base lifting up as well. The matte-black colour is spread evenly across the whole laptop, while ASUS branding is present in the centre on the lid. 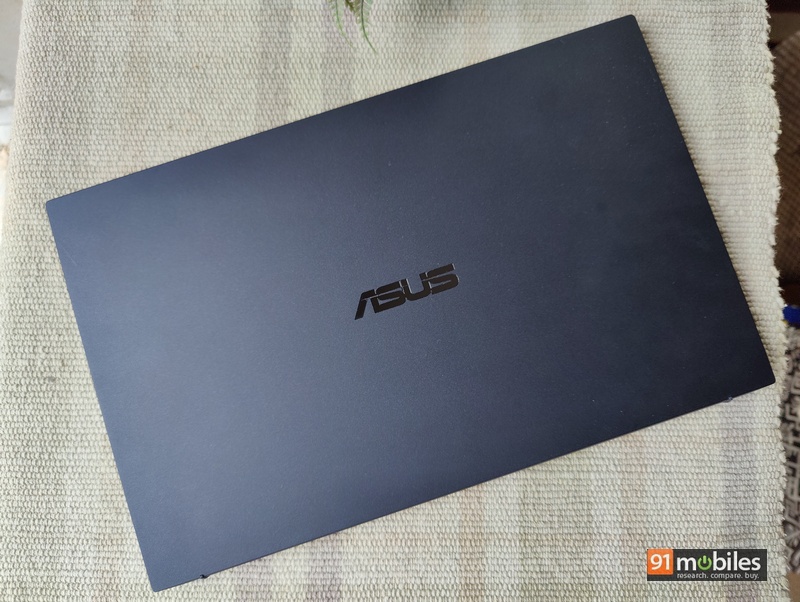 In terms of connectivity, the laptop has a decent amount of options to choose from. There are two USB C ports on the left with Thunderbolt 4 connectivity and DisplayPort support, along with an HDMI Port. There’s a micro-HDMI to RJ45 port as well, with a compatible adapter bundled in the box. The right of the device has a USB 3.2 Type-A port, a 3.5mm headphone jack, and a Kensington lock. Placing one of the USB C ports on the right would have been a better choice in my opinion, along with the addition of an SD card reader. Wireless connectivity options include dual-band Wi-Fi 6 and Bluetooth 5.1. The webcam present on the top bezel comes with IR for facial authentication, while a fingerprint sensor is present on the bottom right just below the right arrow key. 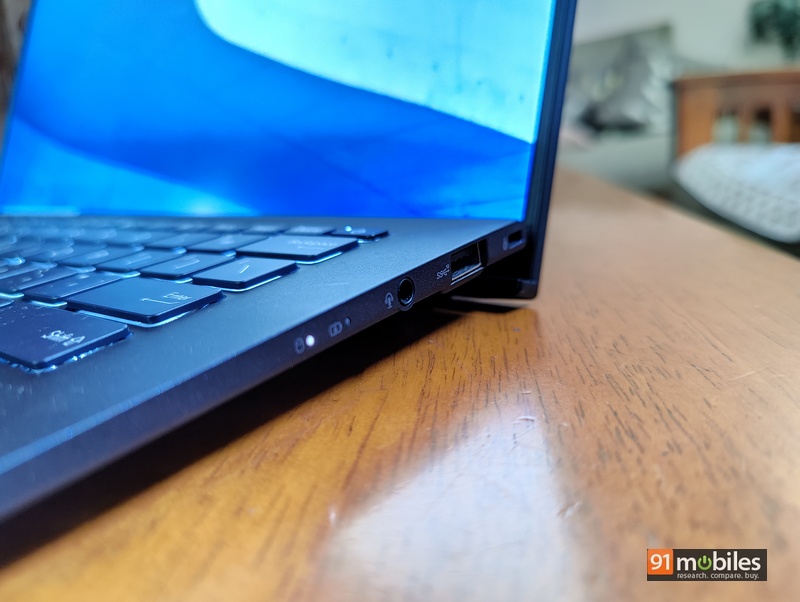 As for the viewing experience, the ExpertBook B9 is employing a standard 16:9 LCD panel with 60Hz refresh rate and FHD (1,080 x 1,920) resolution. The anti-glare coating makes it easy to view the screen even when light is shining directly on it. ASUS claims a 94 percent screen-to-body ratio and the bezels do look extremely slim. At its price point, however, the ExpertBook B9 competes with several devices that offer excellent display capabilities. The DCIP3 coverage of the ExpertBook B9 stands at about 70 percent which is just about average. The brightness levels are more than acceptable with 325nits of peak luminosity allowing for comfortable outdoor viewing. I would advise against using the ExpertBook for any kind of colour correction or photo editing work, as there are many machines in the price category which are more capable. 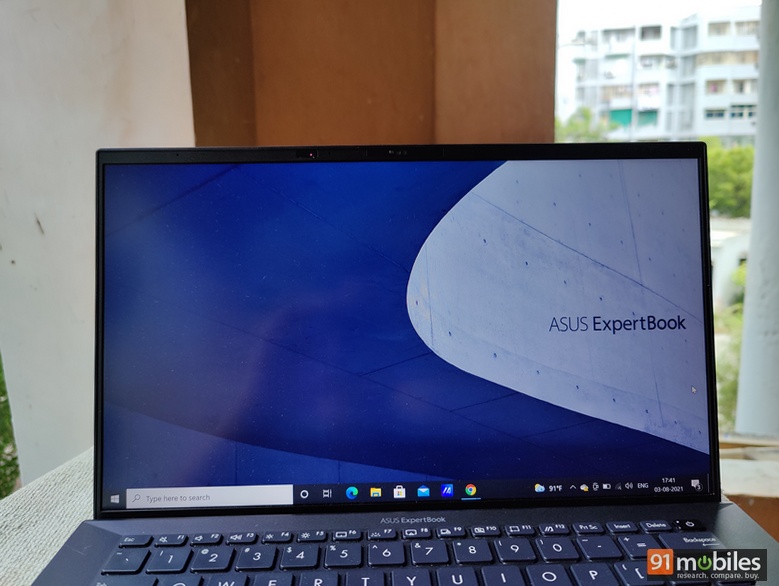 The ExpertBook B9 offers a decent typing experience with a traditional six-row chiclet-style keyboard. The travel on each key is 1.4mm which is good enough and the typing is very much on the quiet side. The backlighting on the keyboard is minimal and non-adjustable, but it gets the job done at night. ASUS has used a spill-resistant design to minimise damage from accidental liquid splashing on the keyboard. 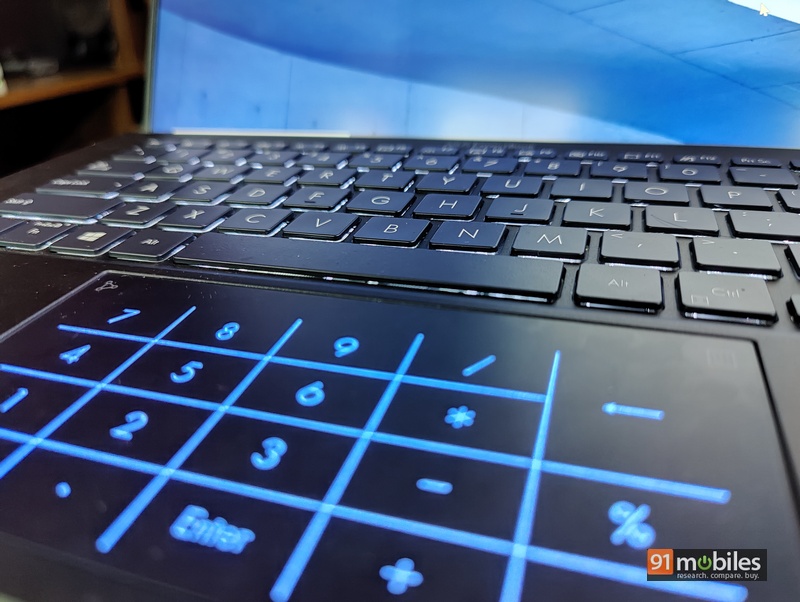 The trackpad is much larger than what you’d typically see on a 14-inch chassis and is extremely responsive too. It also doubles up as a capacitive Numpad with just a long-press on the top-left, and it works flawlessly. Windows Precision Drivers allow it to offer responsive gestures and multi-finger support. As I suggest with all laptops, if you are planning on doing more intensive tasks, it would be prudent to use an external mouse. 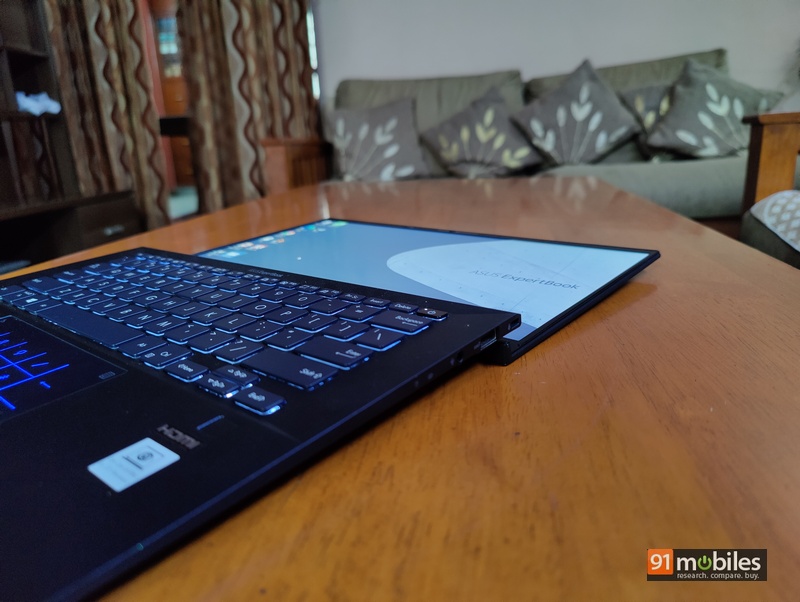 Running on Intel’s Evo platform, the ExpertBook B9 has been certified for a few key things which allow it to flaunt this ‘Evo’ branding. These include waking up from sleep in less than second, 9 hours of battery life, and enabling up to 4 hours of laptop usage with 30 minutes of charging. The Intel 11th-gen i7-1165G7 quad-core CPU is not a performance beast but it certainly offers effortless multitasking. The thin chassis is not very conducive for thermal management but if going about your work involves productivity applications like MS Office, then the ExpertBook has you covered. Benchmark numbers also more or less prove this point. On Cinebench R23, the device logged single-core and multi-core scores of 1,081 and 3,783. Geekbench showed more of the same with 1,536 and 4,576 respectively while PCMark logged a respectable 4,928. Iris Xe graphics handle the GPU-intensive tasks but the device isn’t reallt meant to play AAA games. Counter Strike: GO and Valorant can be played on low graphics settings though. On 3DMark’s Time Spy GPU test, the device scores 1,083 which should make the device’s graphical capabilities clear. For perspective, a proper gaming laptop like the Asus ROG Zephyrus G14 with discrete graphics manages a score of over 5,000 on the Time Spy test. I was much more impressed with the 3,522MB/s Read and 2,426MB/s Write speeds of the 2TB NVMe PCIe SSD on CrystalDiskMark. The ExpertBook is one of the few laptops that features dual NVMe M.2 slots in a RAID 0/1 configuration. This results in extremely fast data transmission speeds to the tune of 7,000MB/s. My review unit comes with 32GB of LPDDR4X RAM but you also have the option to get a 16GB RAM version. 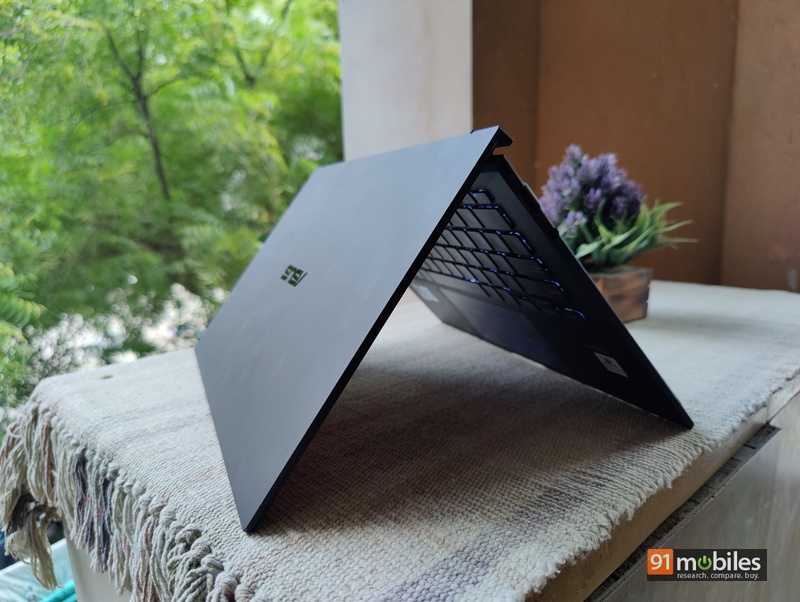 The lightning-fast authentication from the laptop’s IR camera logs me in instantly as soon as the proximity sensor alongside detects that I’m in front of the laptop. The fingerprint sensor also works as fast, although I very much prefer the convenience of face unlock. Lest I forget, the device also comes with speakers powered by Harman and Kardon that sound good enough at full volume, but lack depth. ASUS has also incorporated AI Noise-Canceling Audio technology so that anyone at the other end of a voice/video call can hear you more clearly. The laptop comes pre-installed with Windows 10 but you can also opt for Windows 10 Pro if that’s something you need. 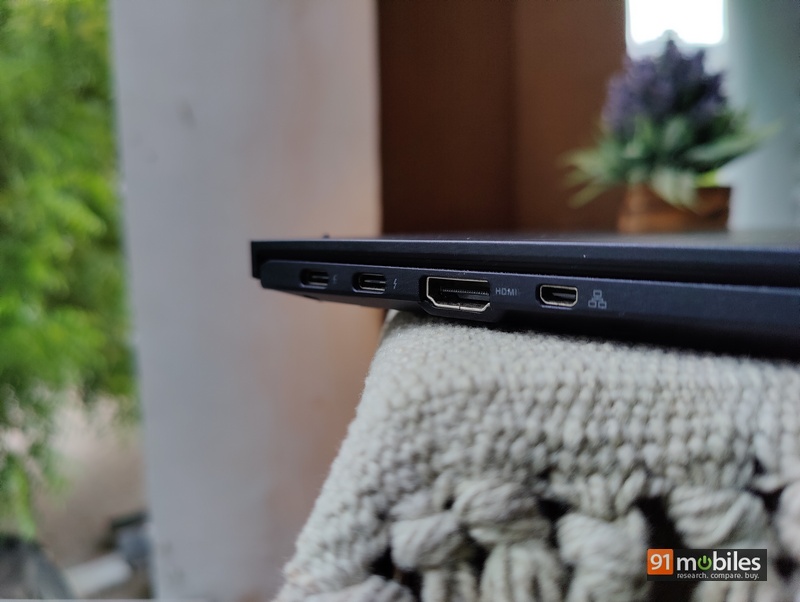 The laptop is offered in 33W and 66W configurations for battery and I have the latter one for review purposes. In simple terms, the laptop has an incredulously good battery life. I haven’t had to charge the device even after using it for two days straight, with about 3-4 hours of Netflix on both days, and typing out this review. In numbers, the laptop can run for 10 hours straight which is more than enough to get you through a workday. It also supports fast wired 65W charging via the USB-C port that can juice up the device by 50 percent in under 30 minutes. 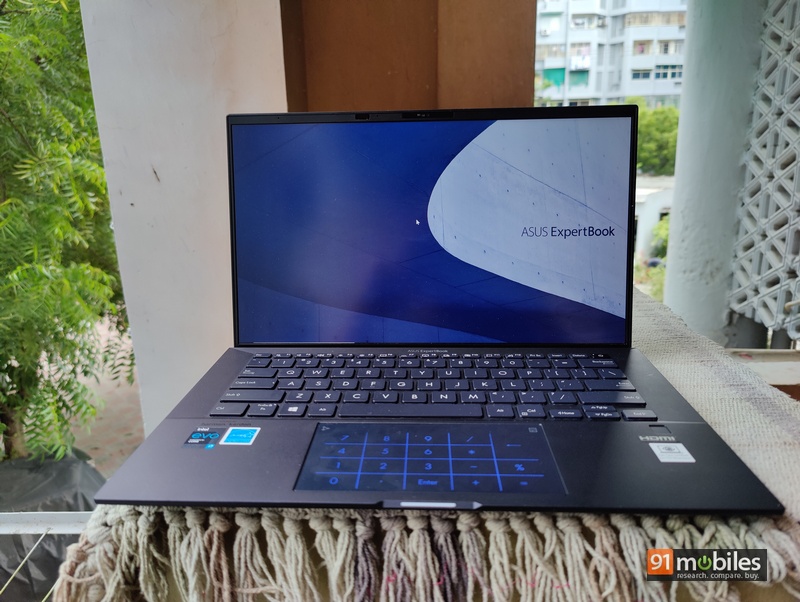 The ASUS ExpertBook B9 has been priced precariously at the top with a lot of contenders vying for the premium ultrabook category. The device certainly has the goods to back up its claim with its extremely light design, powerful internals, decent speakers and really good battery life. If you’re looking for a highly portable and easy-to-carry Windows machine, the ExpertBook B9 is a choice that won’t disappoint.