Home Mobiles ASUS ROG Phone 5s review: as incremental as it gets

ASUS commands a revered presence in the gaming community and the company’s latitude spans across gaming laptops, desktop components, and high-end PC peripherals. And, with mobile gaming on the rise, it was only a matter of time before the company brought its expertise to the smartphone business too. You guessed it, I am talking about the ROG Phone series which has – since its inception – tailored its phones for gamers’ needs. 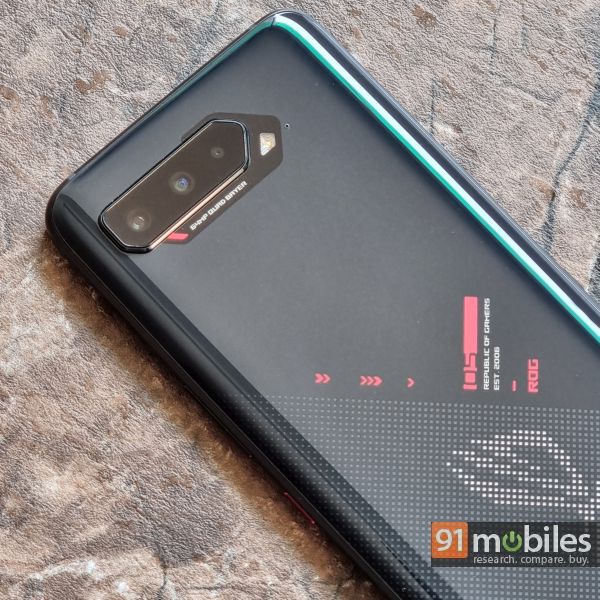 Case in point, the all-new ROG Phone 5s, which comes as the successor to the ROG Phone 5 I reviewed a while ago. The smartphone in question is backed by the fastest processor powering an Android phone in India and as such, is a gamer’s delight. So, should you spend your bucks on ASUS’ latest contender, or settle for a flagship killer from OnePlus or Xiaomi? Well, let’s find out.

The ASUS ROG Phone 5s might not be a proper all-rounder and could face strong competition from the current crop of flagships and the upcoming lineup of Snapdragon 8 Gen 1-powered smartphones, it does make a strong case for itself as a true-blue gaming phone.

The ROG Phone 5s is an iterative upgrade over the ROG Phone 5 launched last year. In fact, barring a processor refresh, the ROG Phone 5s draws parallels to the ROG Phone 5 in every other department. The phone’s design, for instance, remains unchanged and the handset still touts a polarising aesthetic. You can read up on the design by checking out my ROG Phone 5 review, but for the purpose of this article, you should know that the device is quite bulky, which can be accredited to its glass and metal build. Be that as it may, at 238 grams, the ROG Phone 5s is the heaviest handset I’ve tested in a while and the phone will ache your wrists if you use it for extended periods. A fringe benefit of the smartphone’s ginormous chassis is that the device offers an excellent selection of ports. To wit, the handset ships with symmetrical stereo speakers that get exorbitantly loud, a hi-res certified headphone jack that has been paired with an ESS 9280AC DAC, two USB Type-C ports, and the works. As for biometrics, the device features an in-display fingerprint sensor and supports facial recognition too. The sensor was quick to respond to my inputs, and the face unlock feature seemed even snappier, which is great. Adding to the list of pros, the ROG Phone 5s offers extremely tight haptics and correspondingly, the phone is a joy to use to draft long emails or messages. 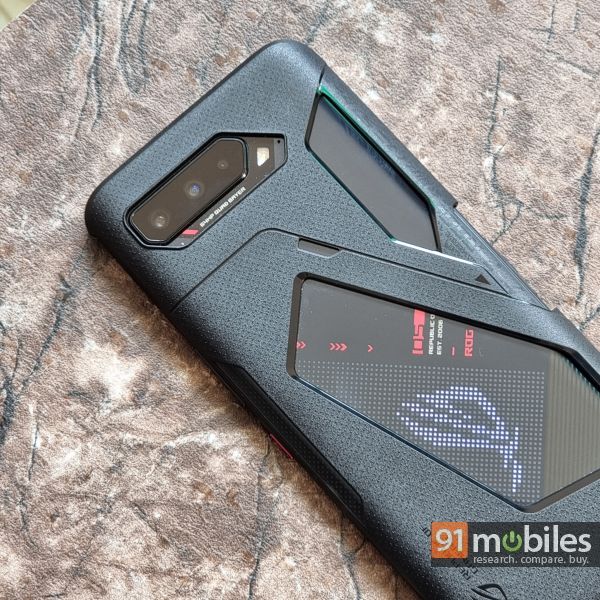 Now, it wouldn’t be a ROG Phone if the device didn’t ship with a slew of gaming features. On that note, the ROG Phone 5s also makes use of the company’s Dual Ultrasonic Air Triggers that have been positioned on either edge of the phone’s right-hand spine. The triggers can be mapped to any in-game command quite easily and the company also allows users to tweak the type of input via the bundled armoury crate app. To wit, instead of pressing the triggers, gamers can make use of a sliding / swiping gesture to register an input too. That’s not all, as the phone also offers a side-mounted connector to fasten the company’s ActiveAero5 Cooler, which helps keep the device’s thermals in check and lends gamers two additional hardware buttons as well. 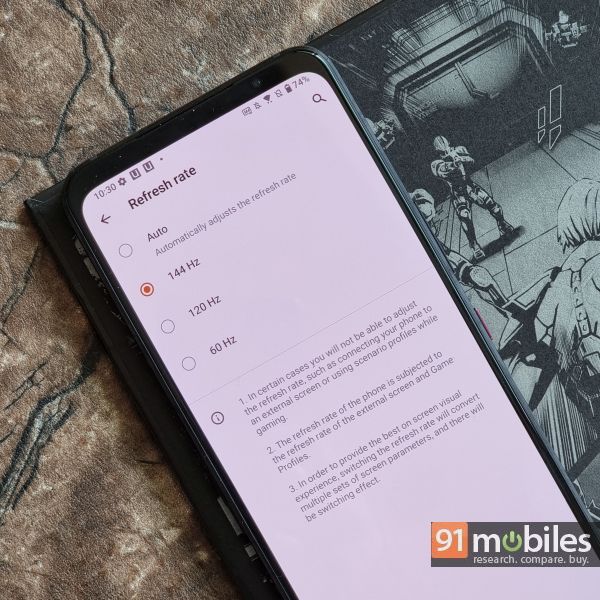 The smartphone’s display has seen some improvements, though most users won’t notice any differences between the ROG Phone 5 and 5s’ screens. I say this because the phone still ships with a 6.78-inch, FHD+, AMOLED panel that refreshes at 144Hz. That said, the panel offers a faster touch sampling rate of 360Hz this time around, making it a tad more responsive when playing games on the fly. Other than that, the display’s quality remains unchanged and buyers opting for the phone will be greeted with a spacious panel that exhibits punchy, vivid hues. The screen’s viewing angles are top-notch too, and the display gets plenty bright at 1,200 nits as well. What’s more, you can relay HDR media on the phone from OTT services like Netflix too, which is great. 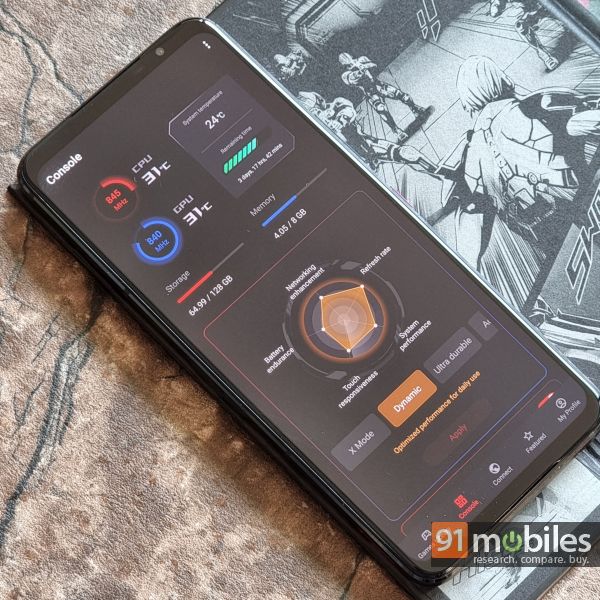 Coming to the meat of the matter, the ASUS ROG Phone 5s is backed by Qualcomm’s Snapdragon 888+ processor which works alongside speedy UFS 3.1 storage and LPDDR5 memory. Understandably, the ROG Phone 5s is the fastest Android phone in India – at least until Snapdragon 8 Gen 1 devices start bombarding the market. That said, the smartphone’s performance isn’t leaps ahead of its predecessor. Heck, I am confident that most users won’t be able to tell one device from the other if they were playing the same game on the ROG Phone 5 and 5s. 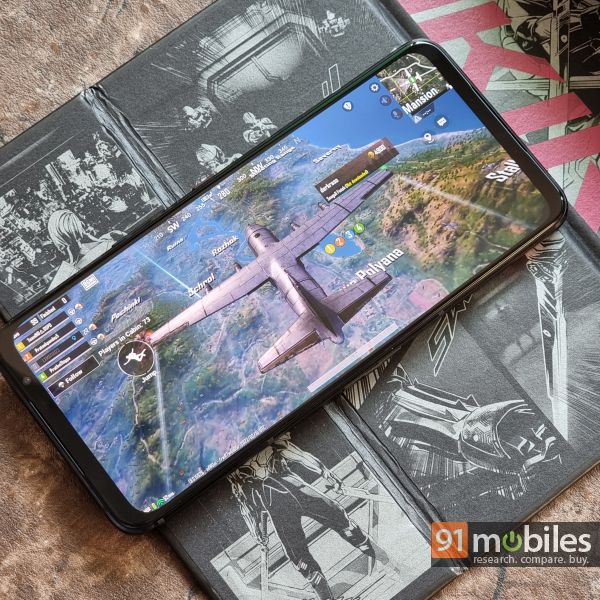 That’s not a jab at the ROG Phone 5s’ performance, mind you. In fact, the smartphone can run pretty much any game at the highest possible graphics and FPS settings. I did test a slurry of titles on the device including BGMI, CoD Mobile, GTA: San Andreas, Dead by Daylight and Genshin Impact, and I was left in awe of the phone’s computing prowess. But, truth be told, I could run the aforementioned titles at similar graphical settings on the ROG Phone 5, or any other Snapdragon 888-backed phone too. Making matters worse, the ROG Phone 5s heats up quite a bit and the chassis’ temperatures can touch as much as 50 degrees after just 15-20 minutes of gaming on the phone. 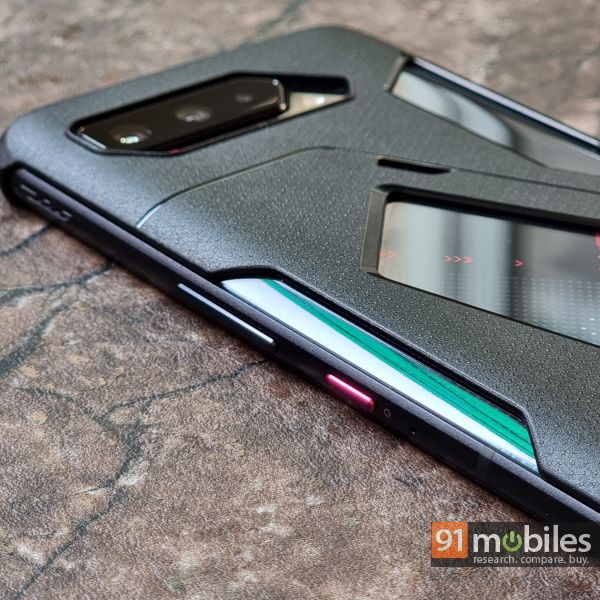 Now, to the handset’s credit, the ROG Phone 5s doesn’t thermal throttle and correspondingly, you won’t stumble across any major frame drops whilst playing graphically demanding titles on the phone. In fact, in our CPU throttling test, the smartphone throttled to just 91 percent of its peak performance and that’s despite the phone’s frame hovering around 53-degree celsius. Simply put, I am yet to see a Snapdragon 8-series phone yield such strong numbers in the test.

On the flip side, I’ll recommend you opt for the ActiveAero 5 cooler accessory to keep the temps in check as the phone gets uncomfortably warm to the touch when subjected to strenuous loads. As for software, the smartphone ships with Android 11 out of the box. While I would’ve liked to see the phone boot Android 12, the company’s interface doesn’t ship with any bloatware. Furthermore, the utility offers a slew of tasteful, gamer-y themes that can even revamp the look of your lock screen. That said, I hope ASUS allows users to leverage third-party icon packs with the phone’s default launcher down the line. 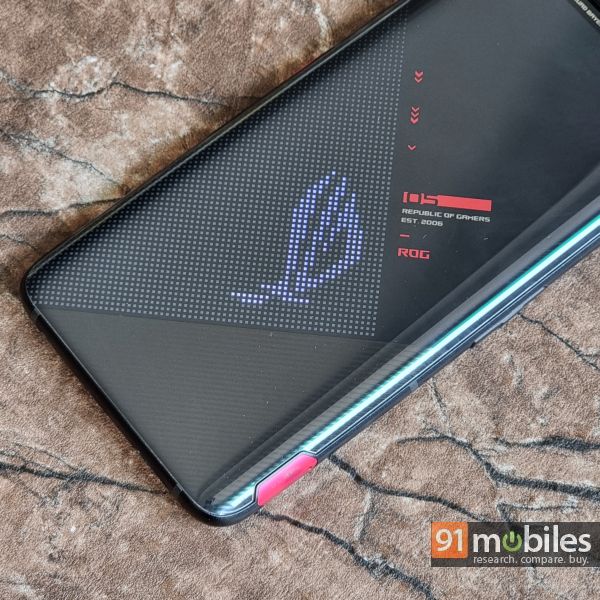 The ASUS ROG Phone 5s sips juice from a 6,000mAh battery that supports up to 65W fast charging. That said, the company bundles a 30W brick with the retail packaging of the phone. As for the battery backup, the ROG Phone 5s can last a full day on moderate usage. That said, the handset’s battery life dwindles quickly if you game on the phone. I expect the average ROG Phone user to drain the battery before hitting the bed. Moving on, the ROG Phone 5s retains its predecessor’s camera stack too and features a 64MP main sensor that works alongside a 13MP ultrawide angle shooter and a 5MP macro lens. For selfies, the device gets a 24MP front-facing camera. It goes without saying that photography isn’t the ROG Phone 5s’ forte, however, the handset’s main sensor can churn out good-looking stills during the day. The sensor reciprocates the colours in a scene to a tee, and the photos are replete with details too. That said, the shots look a tad oversharpened at a closer crop. Furthermore, I would’ve liked to see the phone expose shadows better too. At night, the phone’s dedicated night mode does bring out more information in a scene, albeit introduces some noise in the composition as well. The ultra-wide angle sensor offers serviceable details too, however, objects positioned towards the edges of the frame appear blurry and lack ample sharpness. What’s more, despite clicking images under broad daylight, the shots snapped by the wide-angle sensor exhibited significant graininess. The same goes for the phone’s front camera too, which glosses over the fine details around a subject’s face and yields slightly oversharpened self-portraits in lowlight scenarios. That said, you can get a good-looking photo when it’s sunny outdoors.

The ASUS ROG Phone 5s starts at Rs 49,999 and for the price, offers a fantastic gaming experience. What’s more, the device offers a stunning display too and the smartphone’s audio setup is in a league of its own as well. But, you could say the same for the ROG Phone 5 too, which launched a while ago. Furthermore, the smartphone can’t hold a candle to devices from OnePlus and Xiaomi’s stables, which offer similar performance for less. Lest I forget, the handsets also feature faster charging speeds, as well as more versatile cameras. In the end, the ROG Phone 5s could face an uphill battle in the Indian market, especially considering that the Snapdragon 8 Gen1 backed smartphones are just around the corner.