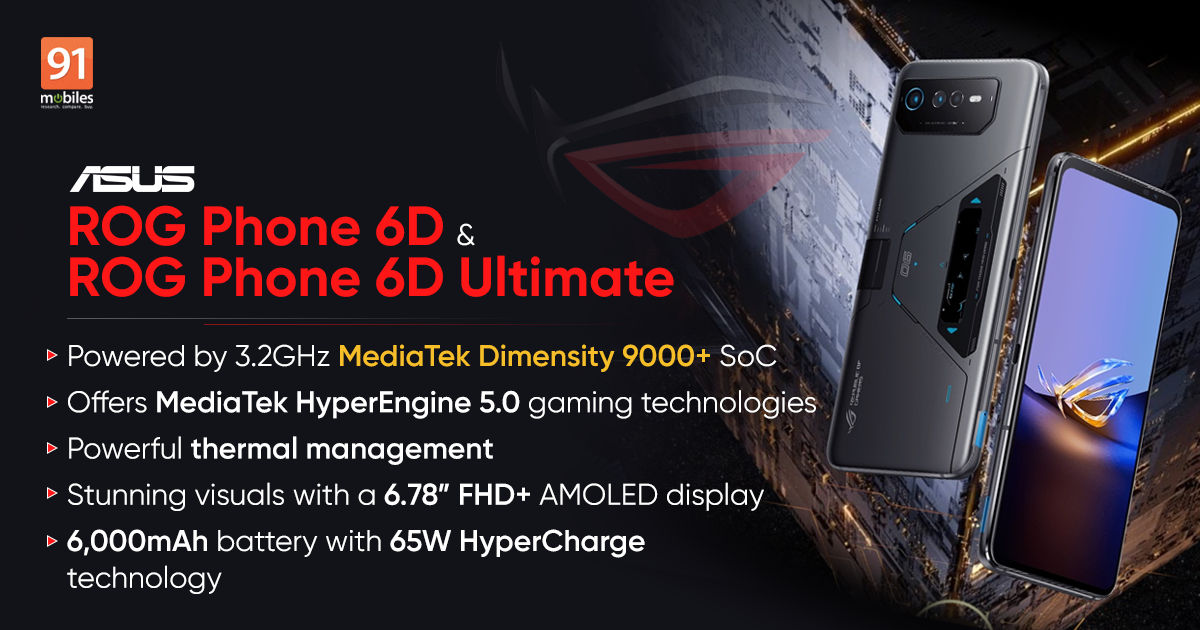 Since its inception, ASUS’ ROG smartphones are revered globally by gaming enthusiasts. The Taiwanese phonemaker recently took covers off its latest duo, the ROG Phone 6D and ROG Phone 6D Ultimate. These smartphones have the same loaded spec sheet and what makes them even special is the fact that gaming enthusiasts will get the most powerful MediaTek processor under the hood – Dimensity 9000+. This is the first time that the ASUS ROG series is utilising a MediaTek chipset, which acts as a stamp of credibility about the sheer power that the flagship SoC possesses and how well it caters to demanding gamers.

Apart from a powerful chipset, the latest gaming-centric offerings from ASUS are capable all-rounders too as they flaunt a 165Hz display, 6,500mAh battery, 50MP triple cameras, and more. Here’s how ASUS ROG Phone 6D and ROG Phone 6D Ultimate pave the new generation of no-compromise, yet all-powerful gaming phones. 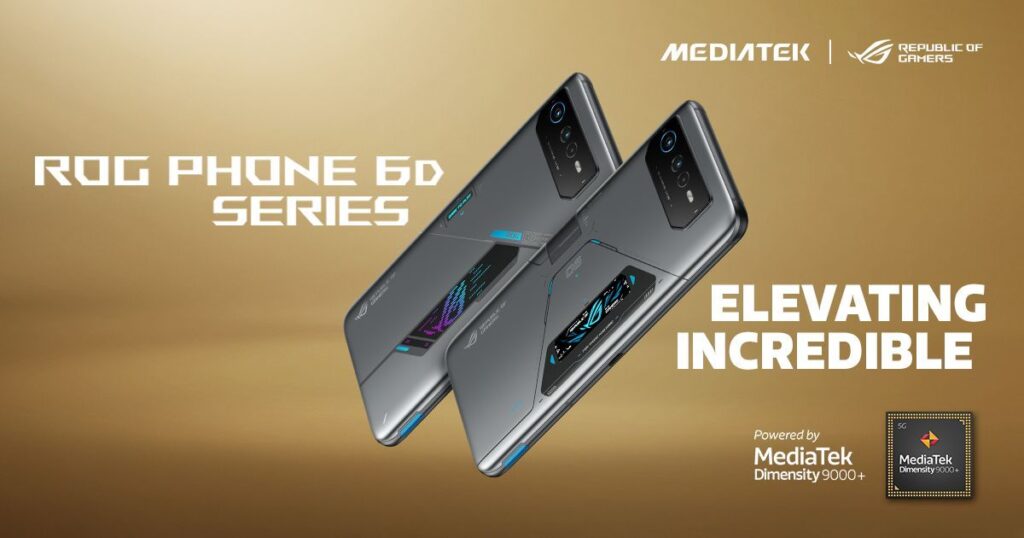 Whether you are running heavy apps, playing AAA games, or switching between multiple apps, the ASUS ROG Phone 6D and ROG Phone 6D Ultimate will handle everything effortlessly.

The integrated Armoury Crate performance manager has an overhauled interface matching the version found on ROG laptops. You get features like Game Genie, Edge Tool, and more. The ROG Phone 6G also features AirTrigger 6, which is now enhanced with Dual Action, Press and Lift, and Gyroscope Aiming. ASUS has also improved the haptic feedback in the smartphone for powerful in-game haptics.

Effective cooling to keep the thermals in check

ASUS has equipped the ROG Phone 6D with a 360-degree CPU Cooling Technology featuring Aerospace Grade BN (Boron Nitride) thermal compound, which dissipates heat from the CPU more effectively. According to the brand, it offers 200 percent improved heat connectivity and up to 10-degree Celsius lower CPU temperature, which in turn improves the overall performance.

You can also use the AeroActive Cooler 6 accessory, which offers an AI-powered thermoelectric cooler with a physical fan to increase cooling at the hotspots on the back. It results in up to 25-degree Celcius lower surface temperature, which results in a better performance. Additionally, you get four physical buttons and the X Mode + high-performance mode for a console-like experience. 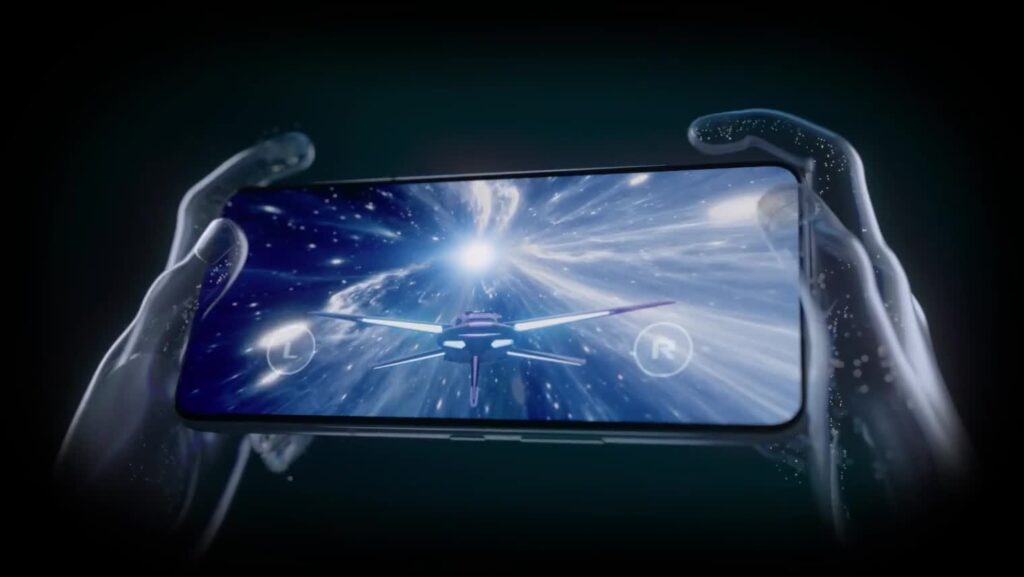 In comparison, the ASUS ROG Phone 6D Ultimate comes with the advanced GameCool 6 cooling system. It features the Aerospace Grade BN thermal compound, enlarged vapor chamber, cooling fins, and graphite sheets. There’s also a unique AeroActive Portal, which sends the airflow from the AeroActive Cooler 6 accessory directly to the internals to cool it down more effectively. This air intake portal opens automatically when the AeroActive Cooler 6 is attached to it.

The ROG Phone 6D and ROG Phone 6D Ultimate will make you lose the count of hours while playing your favourite titles without worrying about the rising temperatures.

Best gaming display on the market

Both the ASUS ROG Phone 6D and ROG Phone 6D Ultimate come with a 6.78-inch FHD+ AMOLED panel. If you think this is a run-of-the-mill display, think again. The screen supports a 165Hz refresh rate and a 720Hz touch-sampling rate for a superior gaming experience with low latency and super-responsive input.

For a great gaming and multimedia experience, a smartphone must offer a brilliant display and a powerful audio setup. ASUS seems to have received that memo because the ROG Phone 6D and ROG Phone 6D Ultimate ship with symmetrical dual front-facing stereo speakers, a 3.5mm audio jack, and audio optimisation in collaboration with audio specialist Dirac. 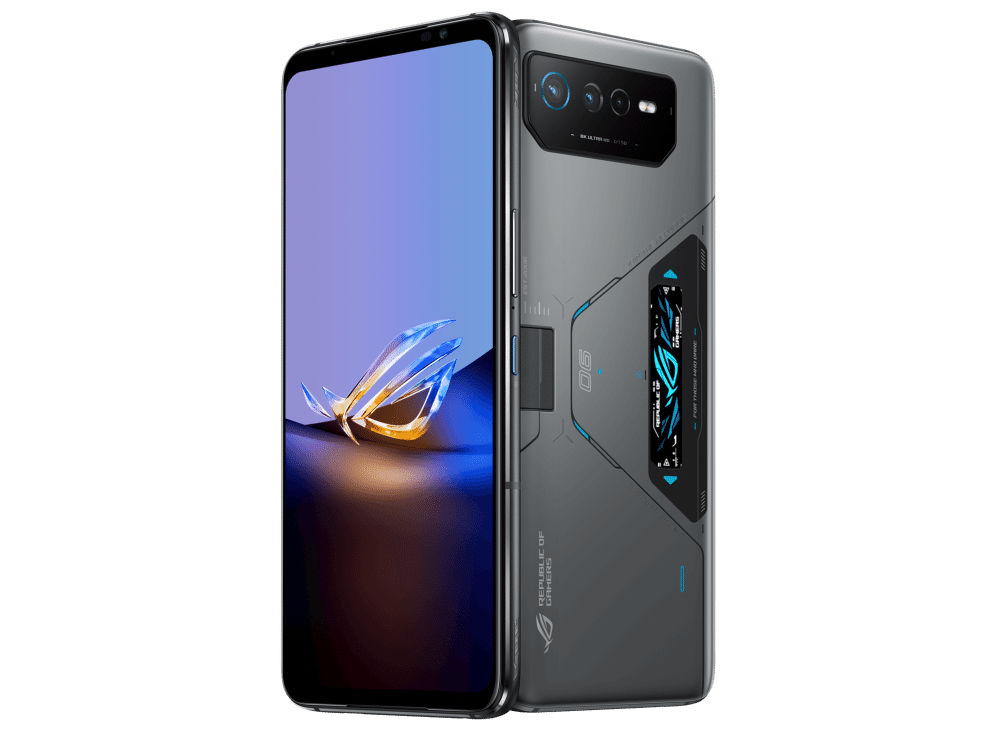 The devices also feature ASUS’ proprietary GameFX audio system. It lets users fine-tune the audio to suit different game, movie, or music scenarios. By fine-tuning the EQ bands, you will be able to enjoy a crystal clear and loud audio output.

Distinctive cameras for a gaming phone

It’s a known fact that gaming smartphones are not built for imaging, but ASUS seems to be working towards changing the narrative. The ASUS ROG Phone 6D and ROG Phone 6D Ultimate sport a triple-camera setup on the back. It’s headlined by a flagship Sony IMX766 50MP shooter. The primary lens is backed by an ultra-wide 13MP secondary camera and a macro sensor. The camera array makes sure that you can capture all scenarios with ease. The phones feature a 12MP shooter on the front for selfies and video calling.

Last but not the least, your gaming smartphone should feature a powerful battery to let you play for a longer duration. The ASUS ROG Phone 6D and ROG Phone 6D Ultimate don’t disappoint in this respect either. They come powered by a massive 6,000mAh battery with support for 65W USB PD HyperCharge technology. ASUS also offers features like Steady Charging to control charging speeds and Bypass Charging to stop charging during gaming. 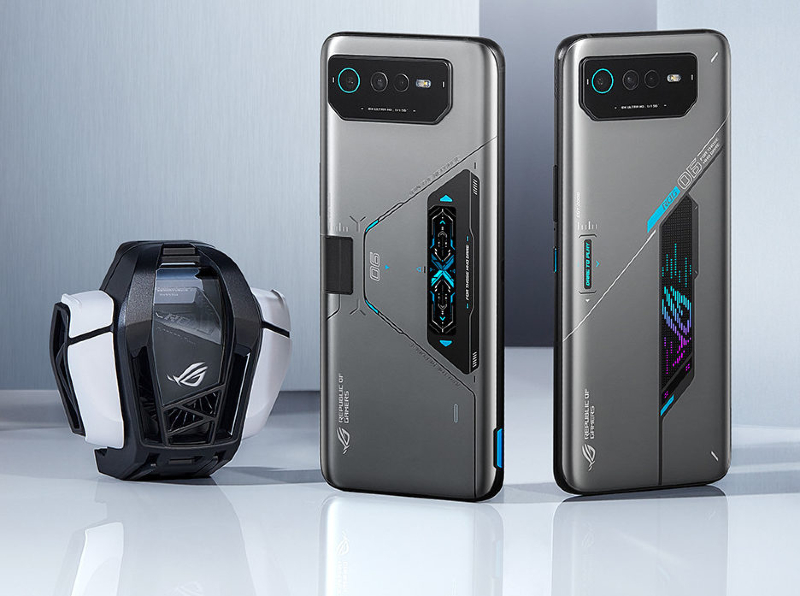 It’s evident that the ASUS ROG Phone 6D and ROG Phone 6D Ultimate mark a new leap in mobile gaming. Not to mention the fact that the flagship MediaTek Dimensity 9000+ chipset makes a lot of difference in providing a superb performance and gaming experience. While the ASUS ROG Phone 6D India launch plans aren’t clear yet, we seriously wish that the duo make their way to the subcontinent. After all, where else would you find a brilliant combination of immense firepower in an aesthetically-pleasing smartphone that ticks all the right boxes too?