Home First impressions ROG Phone: a closer look at accessories that you can buy with... 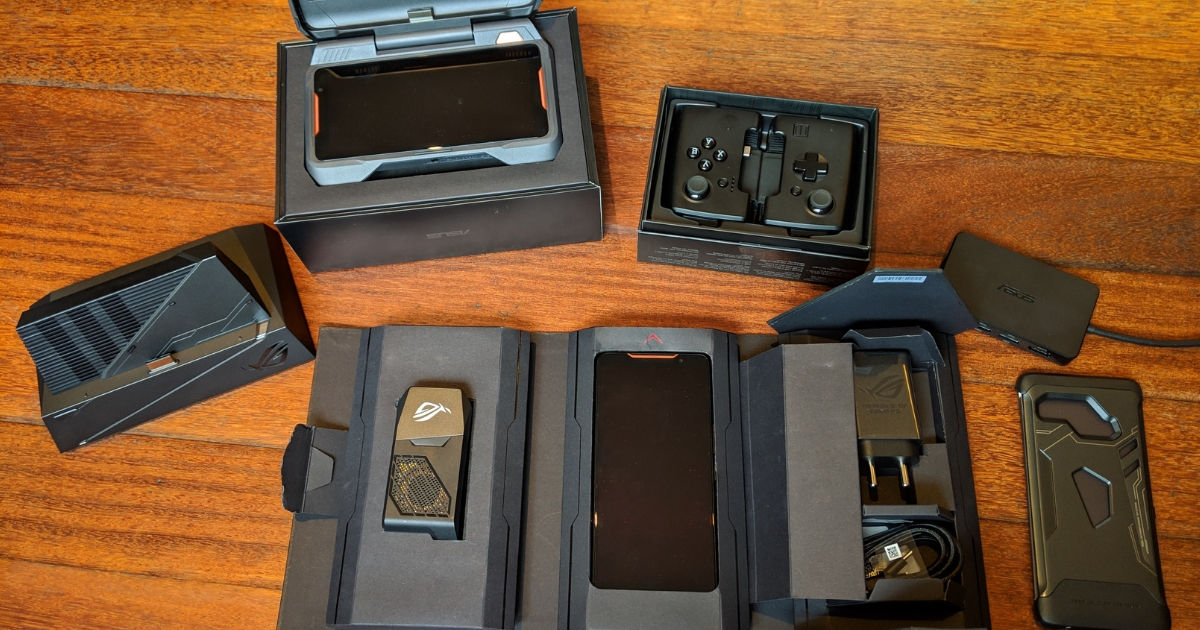 “These accessories will augment your gaming experience, if you are looking to purchase the ROG Phone”

Gaming smartphones seem to be the next big thing, but we haven’t seen much action in the Indian market. There’s nubia Red Magic (review) which is set to launch soon, but none of the other gaming-focused phones has been launched in the country. Until now that is. Taiwanese brand ASUS has just released the ROG Phone (first impressions) in the country. Priced at Rs 69,999, the smartphone is a true-blue flagship with a lot of interesting features that will entice the gamer community. That said, the ASUS’ handset isn’t just about the hardware itself, the device will also come with a lot of accessories that will augment the gaming experience. So let’s take a closer look at these accessories. 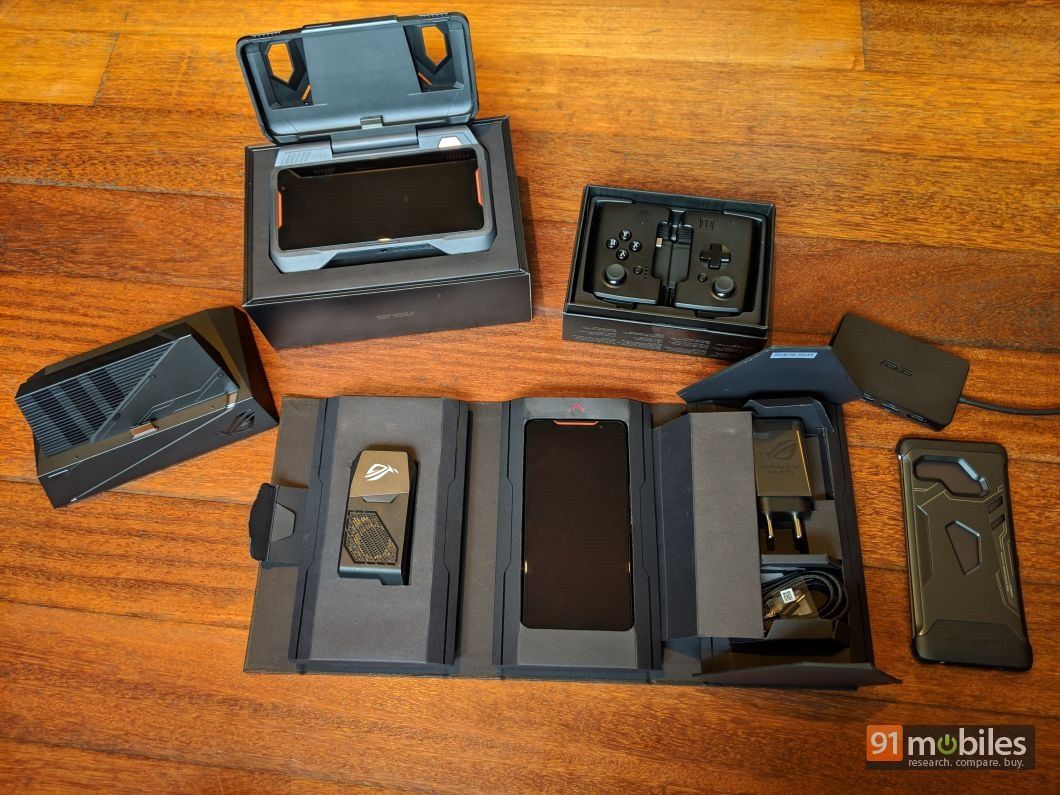 How are the accessories connected to the ROG Phone?

Well, before we begin with various accessories that are available to you, it’s worth knowing how you can connect them. The ROG Phone has a port on the left spine (which has a USB Type-C socket as well along with a proprietary one). The reason for the same is that gamers play in the landscape mode, so they can connect various modules without changing the way they’re holding the handset. 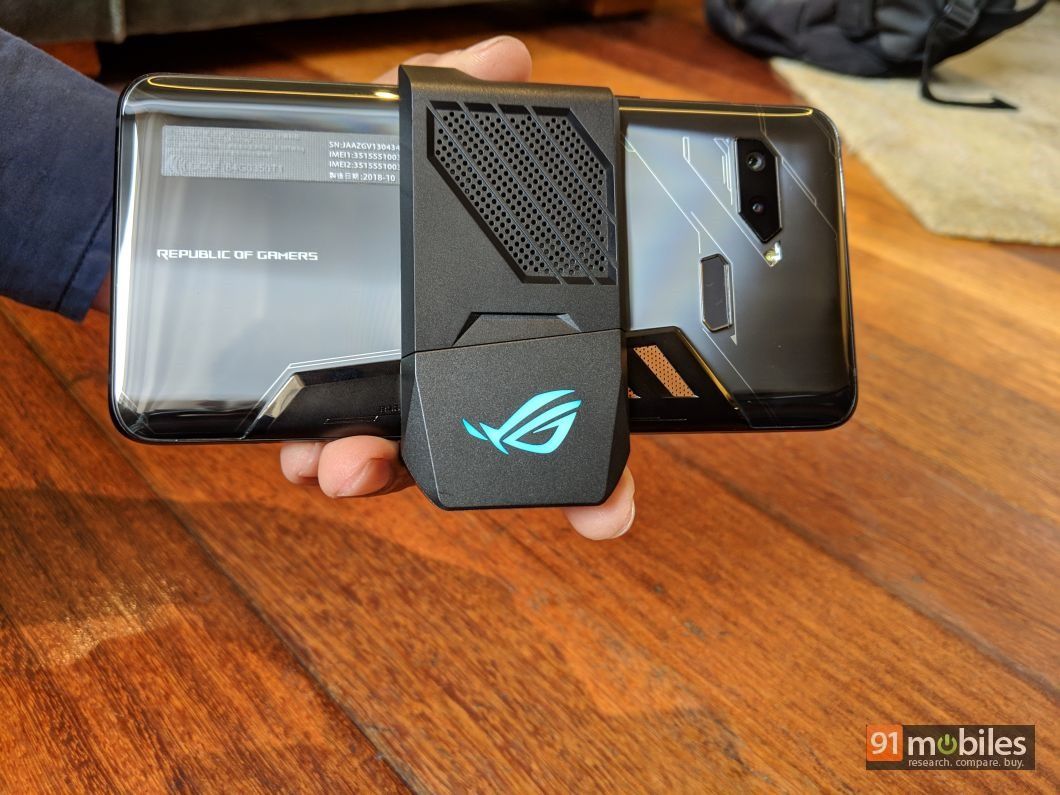 Considering that long hours of gaming tend to heat up smartphones, ASUS has bundled an AirCooler completely free of charge with the ROG Phone’s retail box. While the device comes with a vapour cooling chamber, it also allows you to enhance the thermal efficiency by letting you attach the module to offer a better ventilation for heat to pass through. That’s not it, the accessory also has a 3.5mm audio socket and a Type-C port for letting you connect to headphones or charge the device while playing. 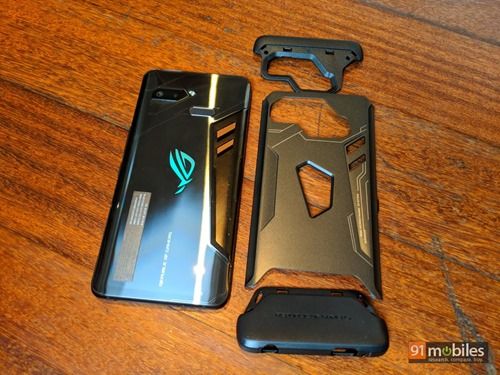 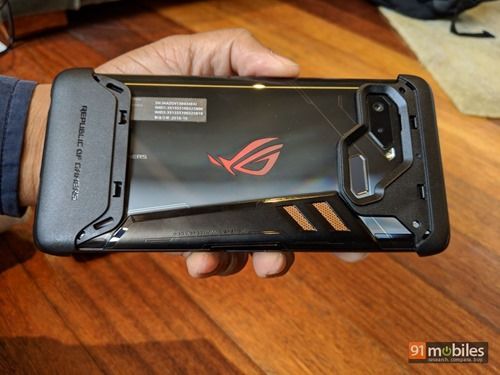 The breathing RGB logo at the back of the ROG Phone is meant to grab your attention instantly. But what if you want to protect the smartphone, but at the same time know that a back cover will take the charm away from the handset? Well, the company has come up with an intuitive solution to the same as it has launched a special cover, which doesn’t cover the area of the logo. That’s not all, since you might want to connect other accessories with the ROG Phone, then the case has a removable portion in the middle. 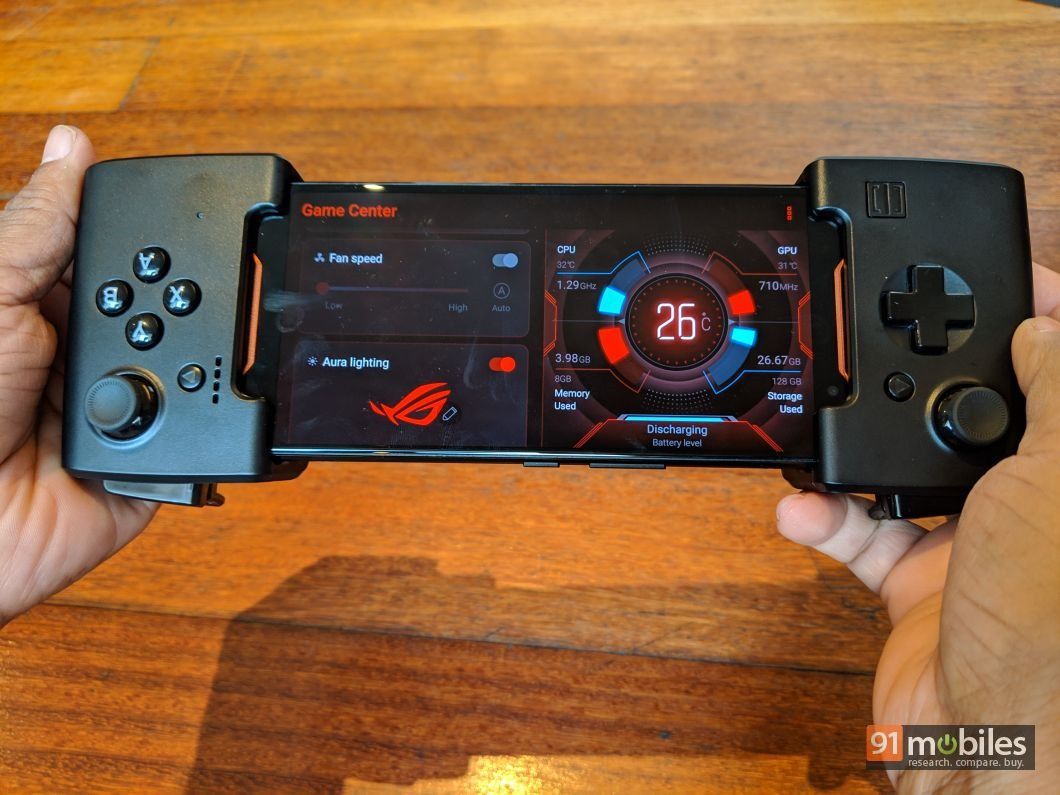 The idea of attaching controllers to a smartphone isn’t new, but GameVice just makes it better. The module comes with a number of controls, including dual analogue joysticks, left and right triggers along with bumpers, a D-pad as well as A, B, X Y and L3 and R3 buttons.

As far as the price is concerned, you’ll need to shell out Rs 5,499 for this accessory. 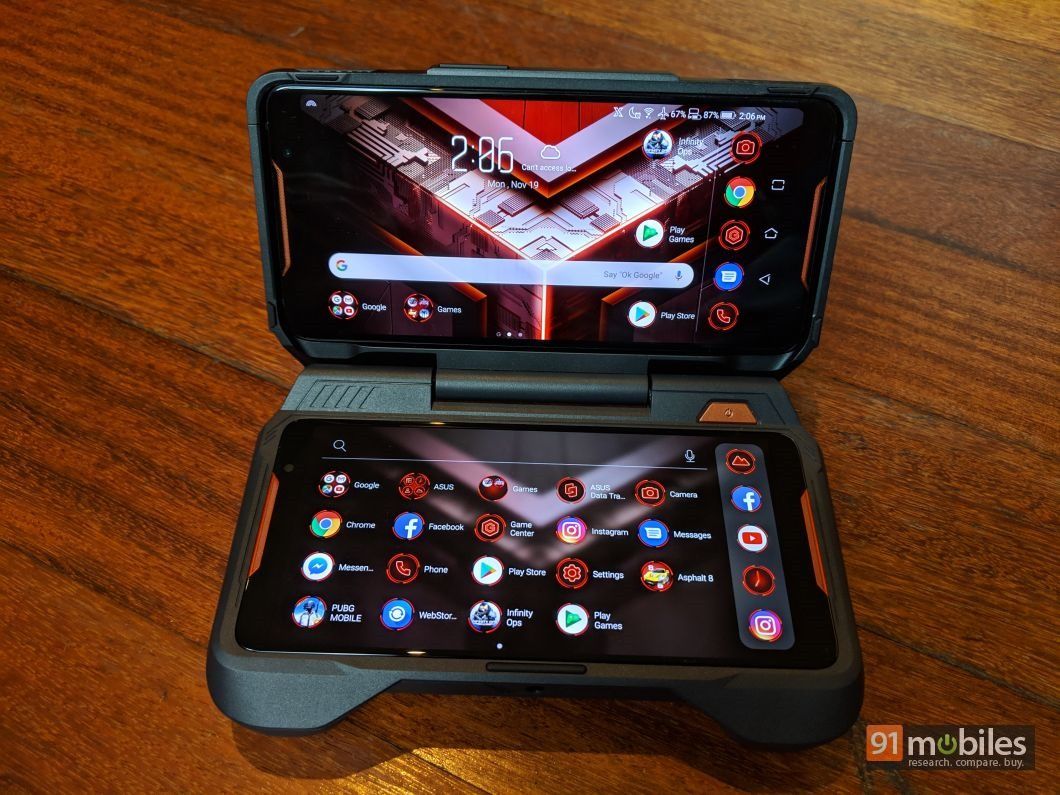 If you’ve caught on the bug of livestreaming your gaming via services like Twitch, then the TwinView Dock will make your life much easier. As the name indicates, it offers a secondary 6-inch FHD screen allowing you to play the game on the phone while chatting with the audience at the same time. The dock also offers physical triggers as well as haptic feedback to enhance the gaming experience. Furthermore, you get impressive audio output thanks to quad speakers. The accessory also packs in a 6,000mAh battery.

The TwinView Dock is the costliest of the lot with a sticker price of Rs 21,999.

While the ROG Phone is great for gaming on the go, what if you want to enjoy its gaming capabilities on a larger screen while at home? Well, for that, the brand has the Professional Dock on offer. It lets you turn the smartphone into a CPU of sorts since not only the dock comes with an HDMI port to connect to a 4k monitor / TV, but an Ethernet port, four USB ports, a microphone socket and a 3.5mm interface (with S/PDIF input to even connect to a 5.1 surround sound system) as well. 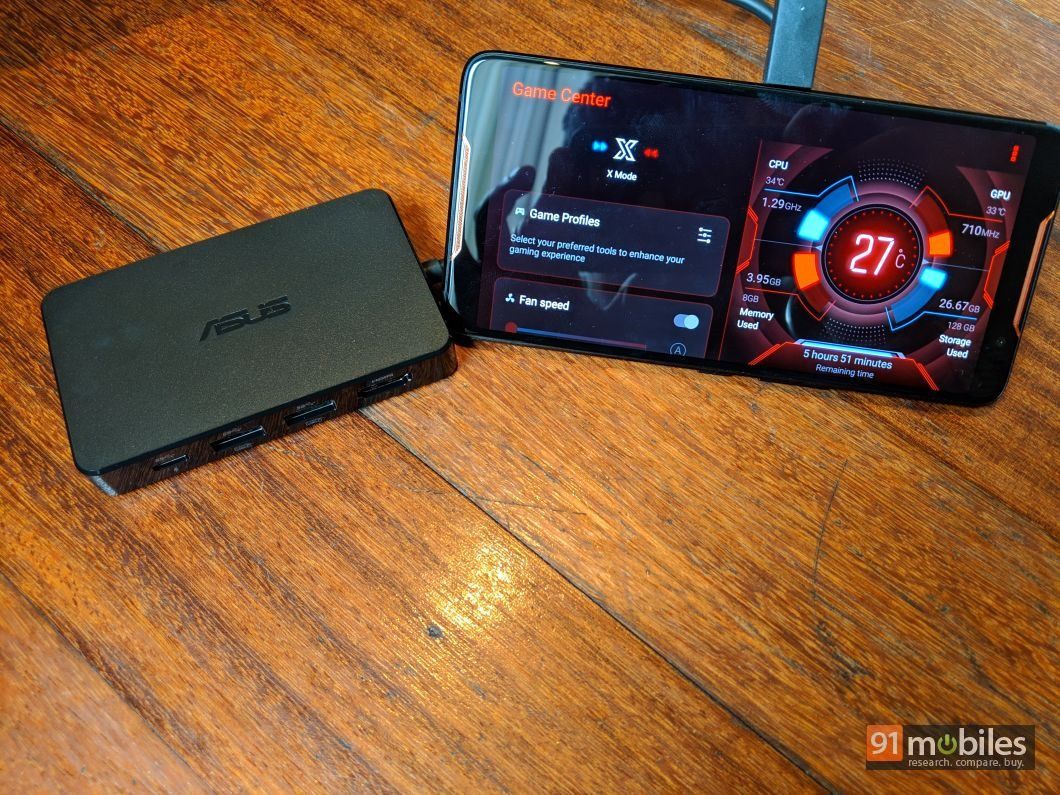 What if you want to connect to a larger screen, but don’t want to spend as much as the asking price of the aforementioned dock? Then ASUS has its mini version of sorts on offer as it only comes with the display port, a USB port and an SD card slot. Price-wise, you will need to shell Rs 5,499 for this accessory.

The ASUS ROG Phone has already gone on sale in India via Flipkart. It’s evident that ASUS is aiming to make its latest offering an exciting option for gamers, since along with a fully-loaded smartphone, they can also have accessories that add to their gaming experience.