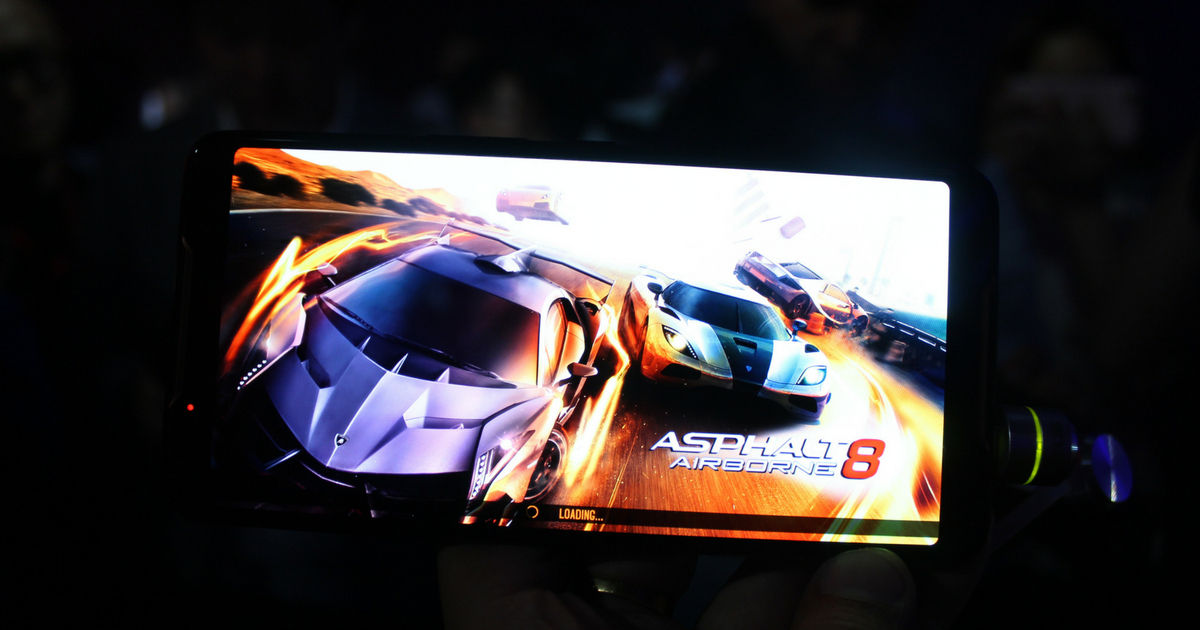 The category of gaming smartphones has suddenly become quite hot. From gaming major Razer to Chinese brands Xiaomi (via its subsidiary Black Shark) and Nubia, quite a few brands are currently in the race to bring the best gaming experience on the go. Joining that bandwagon is Taiwanese brand ASUS, which took the covers off its debut gaming-centric handset in its Republic of Gamers series on the eve of Computex 2018. Dubbed ROG Phone, the smartphone is seriously loaded, and we’re not saying that because of its powerful specs. We managed to spend some time with the handset, and believe that it ushers in a new era for handheld gaming. Here’s why. 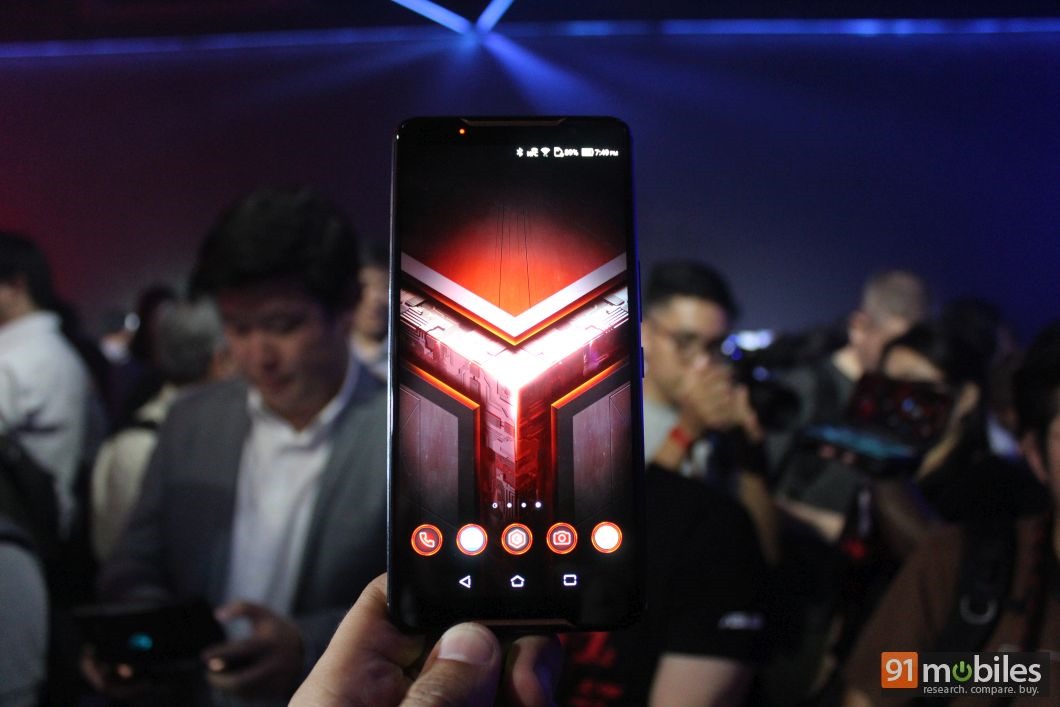 Hardware is key for any gaming device, and the ASUS has left no stone unturned in offering the top-of-the-line specs with its latest offering. The smartphone comes equipped with Qualcomm’s Snapdragon 845 chipset, which is paired with 8 gigs of RAM. You may point out that this hardware combination is already offered by other flagships such as the OnePlus 6 (review). Well, the ROG Phone has made use of speed-binning and clocked the SD845 SoC at 2.96GHz, which is more than the 2.8GHz clock speed of the same chip utilised by other phonemakers. Then there are the Adreno 630 graphics, which ensure a smooth gaming experience with crisp frame rates. While we couldn’t run games on the phone for as long as we’d have preferred, playing Ashphalt 8: Airborne was certainly fun. That’s not it, the smartphone also comes with a beefy 512GB storage onboard (there’s a 128-gig variant too). 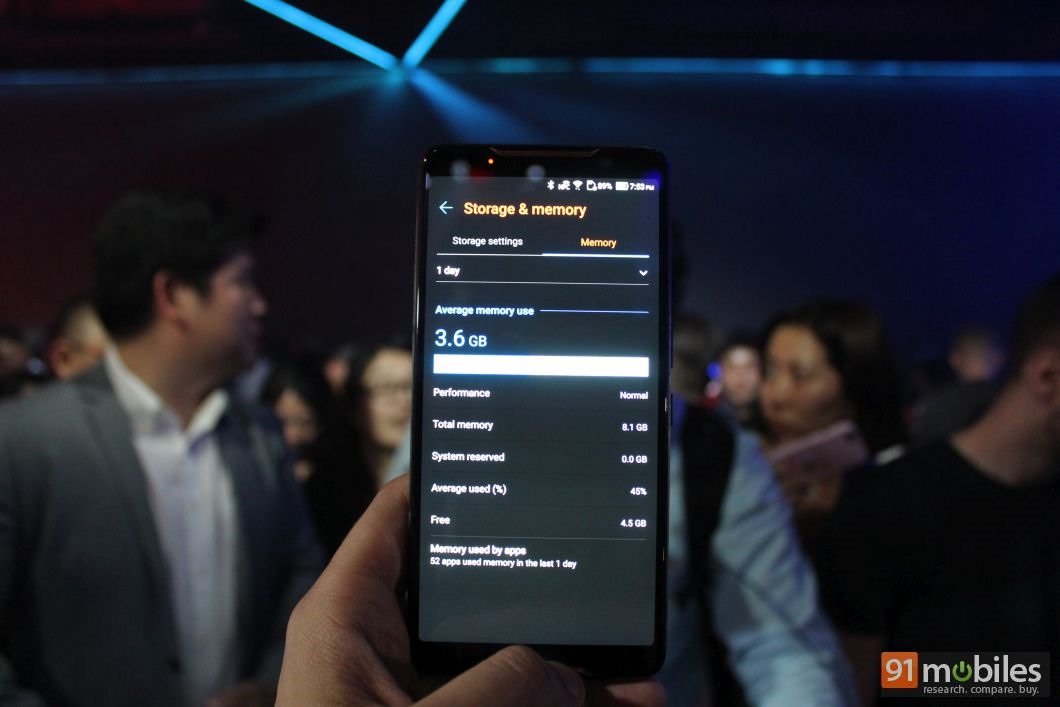 One of the biggest issues with high-specc’d smartphones while gaming is that they tend to heat up… a lot, if we might add. To ensure that the ASUS ROG Phone doesn’t heat up even after hours of gaming, the company has utilised what it calls a 3D vapor-cooling chamber system, which offers a larger surface area to for better heat dissipation as compared to a standard heat pipe-based cooling system, available on some other phones. Also keeping the thermals in check are a copper heat spreader and carbon cooling pads for effective cooling. As per the brand, this mechanism ensures up to 50 percent sustained clock speeds than the SoC on a normal phone and up to five times peak clock speeds as compared to conventional cooling systems. Moreover, the device also comes bundled with an AeroActive Cooler accessory. 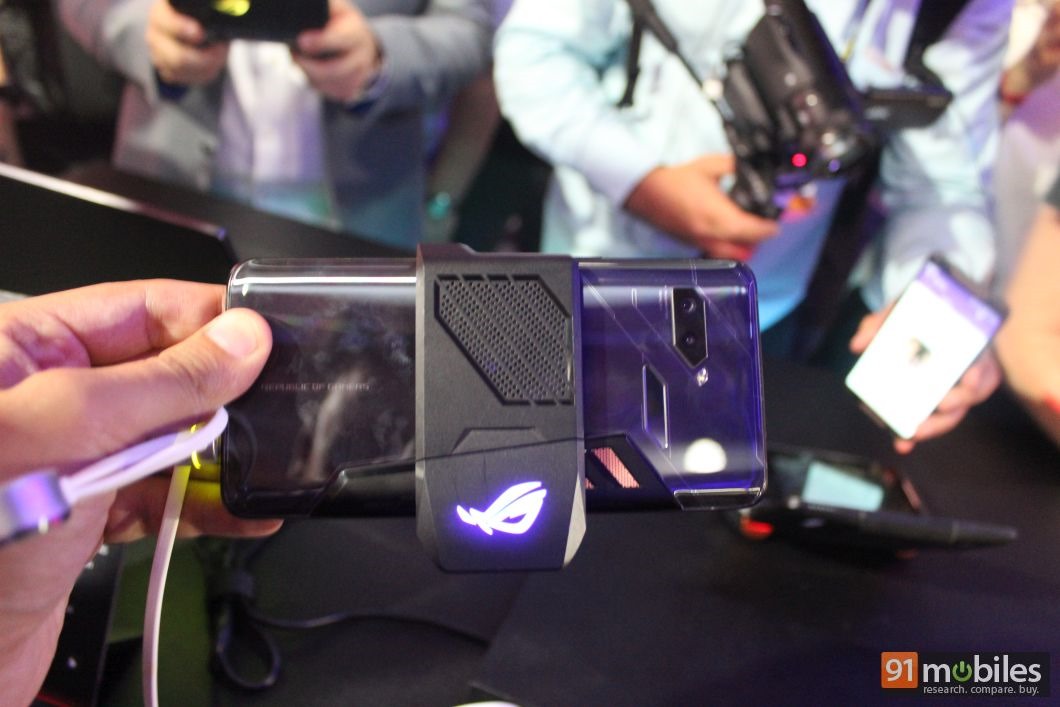 Talking about accessories, the ASUS ROG Phone comes with a slew of options which are available for purchase separately. The TwinView Dock lets users turn the phone into a dual-screen device allowing for gaming on the go. The dock offers a secondary 6-inch screen with FHD+ resolution along with quad speakers. There’s also a dual-haptic feedback system, a cooling mechanism and an additional battery pack of 6,000mAh. Then there’s the Mobile Desktop Dock, that lets users connect the handset to an external monitor, mouse and keyboard to play games on a large screen. Lastly, the Gamevice controller turns ASUS’ newest into a portable gaming console, and also comes with a WiGig Dock to enable ultra-low-latency connectivity with big screens. In terms of physical controls, the controller comes with all the options – dual analog joysticks, D-pad, left and right dire triggers, bumpers A, B, X, Y as well as L3 and R3 buttons.

Aiding the gaming experience is the high-resolution 18:9 display of the ROG Phone, which measures 6-inches diagonally. The AMOLED panel bears a resolution of 1,080 x 2,160 pixels and comes with an aspect ratio of 18:9 and a contrast ratio of 10,000:1. The display also supports HDR playback, much like other flagships, and offers a higher refresh rate of 90Hz. While it doesn’t match the 120Hz refresh rate offered by the Razer Phone (first impressions), it’s certainly better than the competition, and as the brand rightly pointed out, the ROG Phone is the only smartphone with an AMOLED with this refresh rate. The display has a response time of 1ms, which should come in handy while playing fast-paced titles. 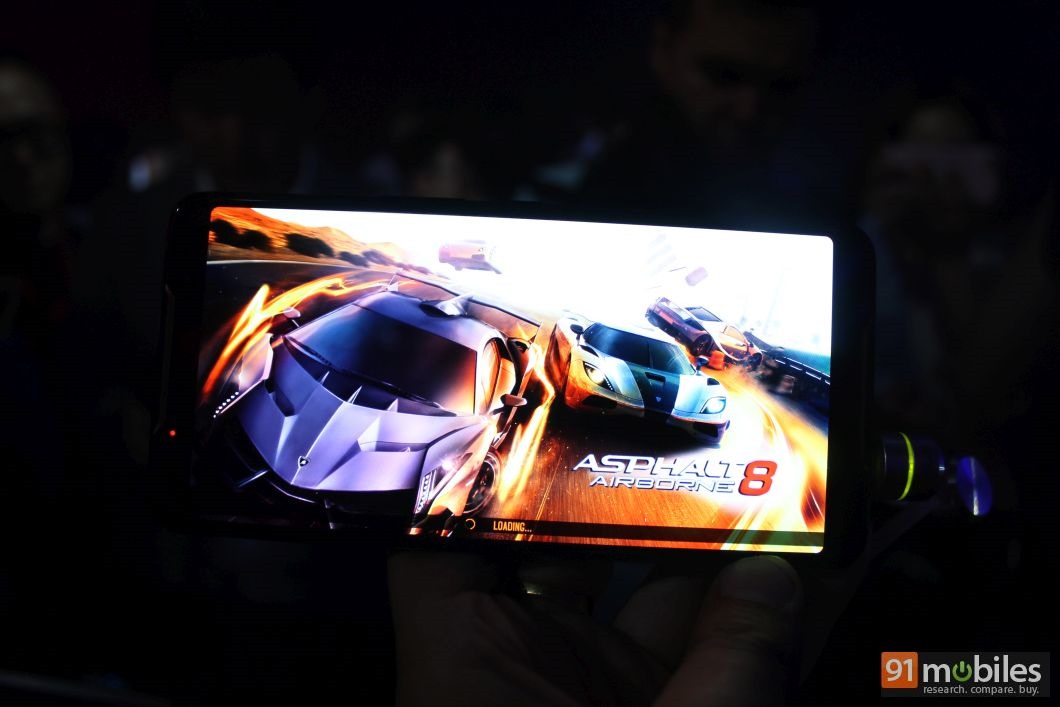 The ROG Phone also promises a long-lasting battery life with its 4,000mAh pack. The device comes with a 20W adapter, dubbed HyperCharge, which promises to juice it up quickly while keeping heat in check. The brand has even optimised the Android 8.1 Oreo platform running on the smartphone. Along with a custom skin, the device comes with features like X Mode, which as the name suggests, enhances the gaming experience by freeing up the RAM and ensuring that notifications don’t distract you while gaming. 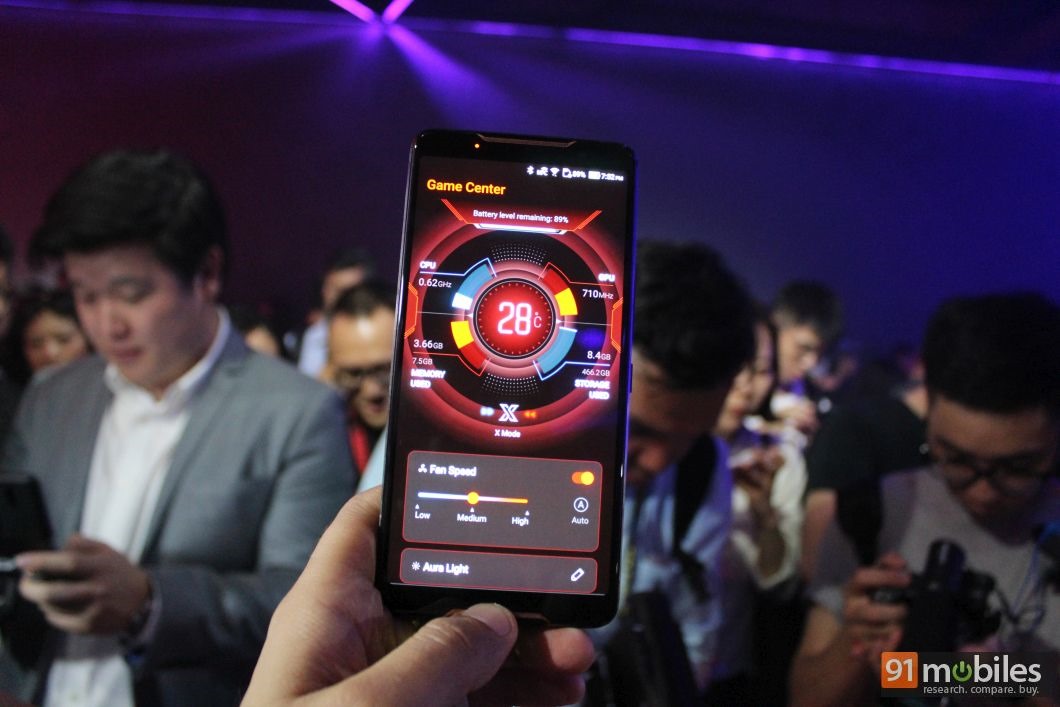 Camera-wise, the ROG flaunts a pair of shooters at the back, including a 12-megapixel primary snapper and an 8MP wide-angle lens. For selfies, the phone features an 8MP camera up front. The camera app has a minimal interface, but does come with options like pro mode, super-resolution, etc. 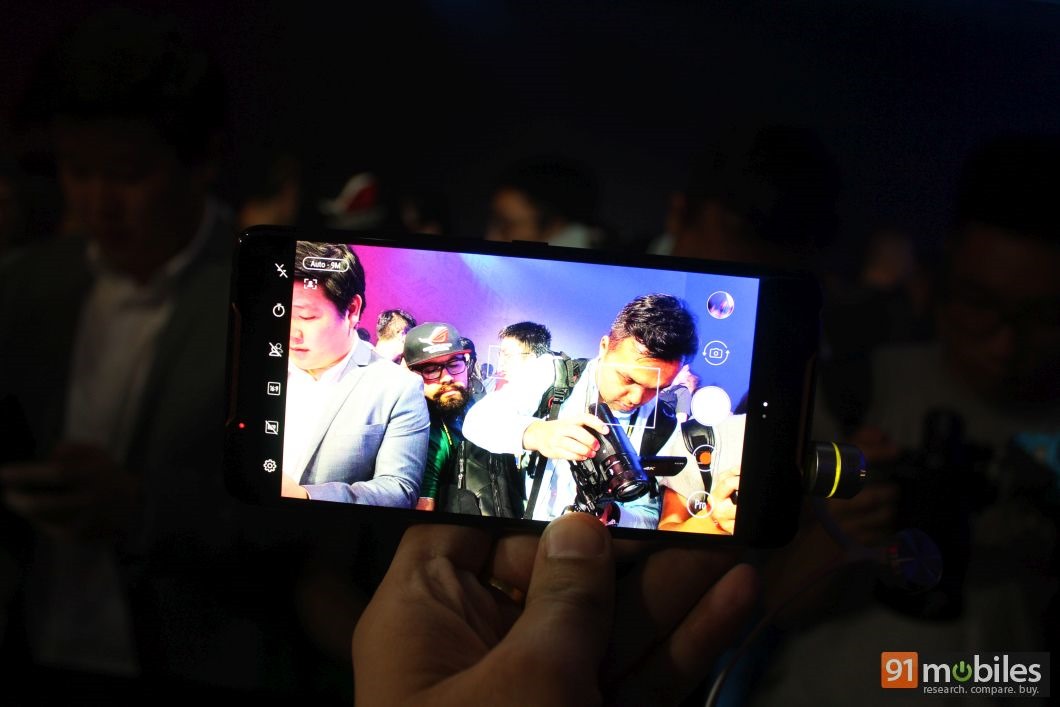 We haven’t talked about the physical aspects of the ASUS ROG Phone yet, and to that end, the phone feels quite premium in the hand. At the front, it has a bezel-less fascia minus the ‘notch’, an earpiece-cum-speaker up top and a glass panel at the rear. The handset is also the world’s first to offer RGB lighting at the rear, which can even be customised. Users can even use it to get differently-coloured lighting notifications for incoming calls, notifications, and more. 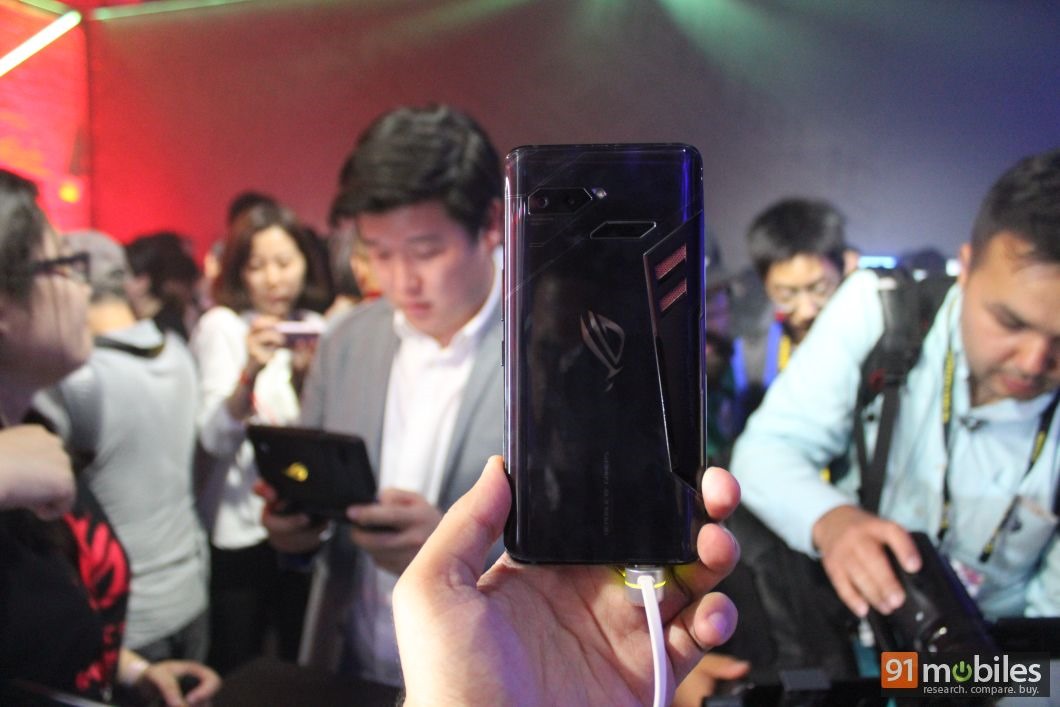 The phone comes with the usual ports and controls, and thankfully hasn’t ditched the 3.5mm audio socket, which is placed at the base. Towards the left, you’ll find the port that lets you connect various accessories mentioned above. Interestingly, you can also connect the Type-C charging cable to this port so that you can game while holding the phone in landscape orientation. Even though the smartphone packs a large battery, it doesn’t feel heavy and isn’t very thick either.

Even though the handset doesn’t have any physical controls, it comes with Ultrasonic AirTrigger sensors, which give the feeling of physical buttons. While there are two such sensors on the left and right side of the screen when it’s held in the landscape mode, there’s another sensor which comes into effect in the portrait orientation. You can customise these sensors as per your needs, and since they use ultrasonic tech, you don’t need to press the display fully. Then there’s a haptic actuator to provide vibration feedback while playing, adding to the experience.

The ASUS ROG Phone is a seriously loaded smartphone and is an impressive debut smartphone in the brand’s Republic of Gamers series. However, during the unveiling, the brand didn’t divulge any pricing or availability details, which will be crucial for prospective buyers. While the gaming smartphone category might be in nascent stages, the ROG Phone is perhaps the most well-rounded effort we’ve come across till now. That said, it’s closest rival is the attractively-priced Black Shark, which makes things tough for it… and more importantly, it remains to be seen if the ROG Phone ever makes its way to India.