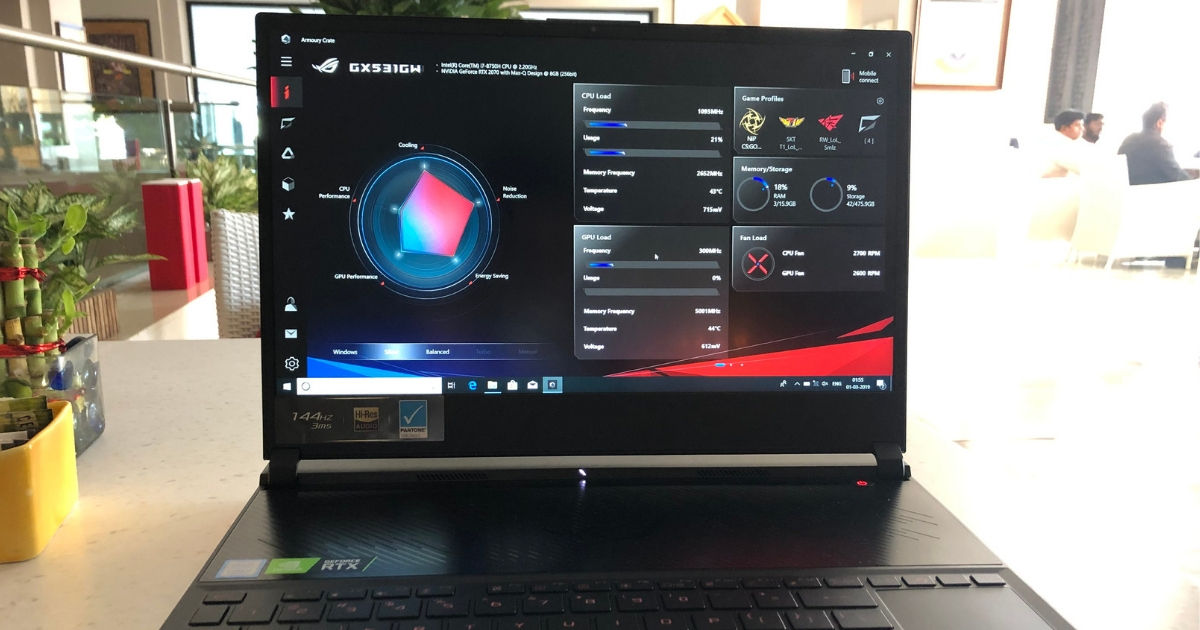 ASUS’ Republic of Gamers (ROG) brand is synonymous with laptop gaming in India. On Monday, the series saw the launch of several new products. The newly-unveiled devices include the ROG Zephyrus S GX531, ROG Zephyrus S GX701, and ROG Strix SCAR II gaming laptops, alongside the GL12CX gaming desktop. The most exciting aspect of the new devices from the ROG series is that they are all powered by NVIDIA’s RTX 2000 series GPUs, which are the latest-and-greatest offerings from NVIDIA to date. We managed to get hands on some of these new offerings ahead of the launch and here’s how we’ll sum up our initial impressions.

Starting with the slim offerings from the brand first, the ROG Zephyrus S GX531 has been claimed by the brand to be the world’s slimmest gaming laptop in its category. Credit where it’s due — the GX531 does feel incredibly slim for a gaming laptop and doesn’t compromise on the specifications either. The rig packs a 15.6-inch full-HD IPS panel with anti-glare coating on top and 144Hz refresh rate. With 3ms response time, the laptop should be ideal for gaming too.

The machine is powered by the latest Intel Core i7-8750H CPU coupled with NVIDIA GeForce RTX 2070 Max-Q for graphics requirements. Needless to say, the GX531 packs enough horsepower to serve your gaming needs on the go. Unfortunately, as we spent limited time with the laptop, we couldn’t gauge its performance.

Coming to the slightly bigger ROG Zephyrus S GX701GX laptop, it comes with a 17.3-inch non-glare FHD IPS display with the same refresh rate and response time as the GX531. The device comes in a slim form factor and seems to offer a good build quality overall. The laptop offers an impressive 81 percent screen-to-body-ratio and features an exclusive GPU switch that lets users switch between the gaming and power-efficiency modes. One of the unique features again is a glowing Numpad that appears on the touchpad itself.

Talking about the innards, the laptop is powered by up to 8th-generation Intel Core i7 processor and NVIDIA GeForce RTX 2080 GPU. As I mentioned earlier, for a laptop with a 17-inch display, the GX701GX comes across as a really compact device that can be carried around with ease. With the RTX 2080, the rig should be able to play even demanding games at high frame rates and with the ray-tracing tech, which looks incredible, to say the least.

Moving on to the ROG Strix SCAR II, the laptop comes with a striking RGB LED strip at the front that looks incredibly cool. The device comes with highlighted WASD keys, which would be appreciated by any FPS players out there. The Scar II also packs a 15.6-inch FHD display with 144Hz refresh rate and 3ms response time, just like the laptops mentioned above. Powered by the 8th-generation Intel Core i7 8750H processor, the gaming laptop ships with HyperCool Pro-tech that is said to help the device maintain its cool, even in the most demanding scenarios. The laptop comes with NVIDIA GeForce RTX 2070 GPU and offers a dual storage solution with SSD + SSHD.

The new laptops from ASUS look promising as they put the traditional bulky gaming laptops to shame. With NVIDIA’s powerful GPUs, the new machines also pack some incredible horsepower to drive most user’s needs. As far as the pricing is concerned, the ROG Strix SCAR II is the most affordable of the lot, and will set you back by Rs 1,64,990 for its base model. The Zephyrus models on the other hand, costs Rs 2,39,990 and Rs 3,49,990 for the GX531 and GX701, respectively. We’ll surely be putting these rigs through their paces, so stay tuned.