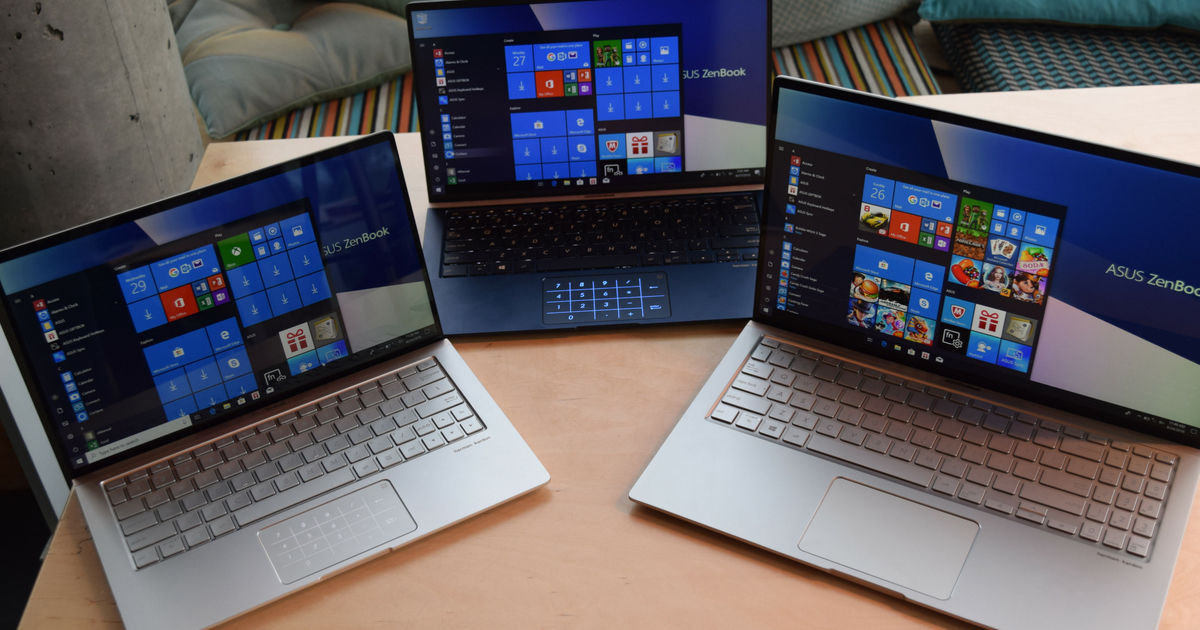 Bezel-less smartphones are passé. Now, its laptops that offer thin bezels around their screens. And the brand that’s at the forefront of this revolution is Taiwanese giant ASUS. The company has been introducing ultraportables with NanoEdge screens, and the latest from its stable seem to be pushing the limits (quite literally). At the IFA conference in Berlin, the company introduced the updated versions of the ZenBook 13, 14, and 15 laptops. I managed to spend some time with the trio and here’s how I’ll sum up my impressions. 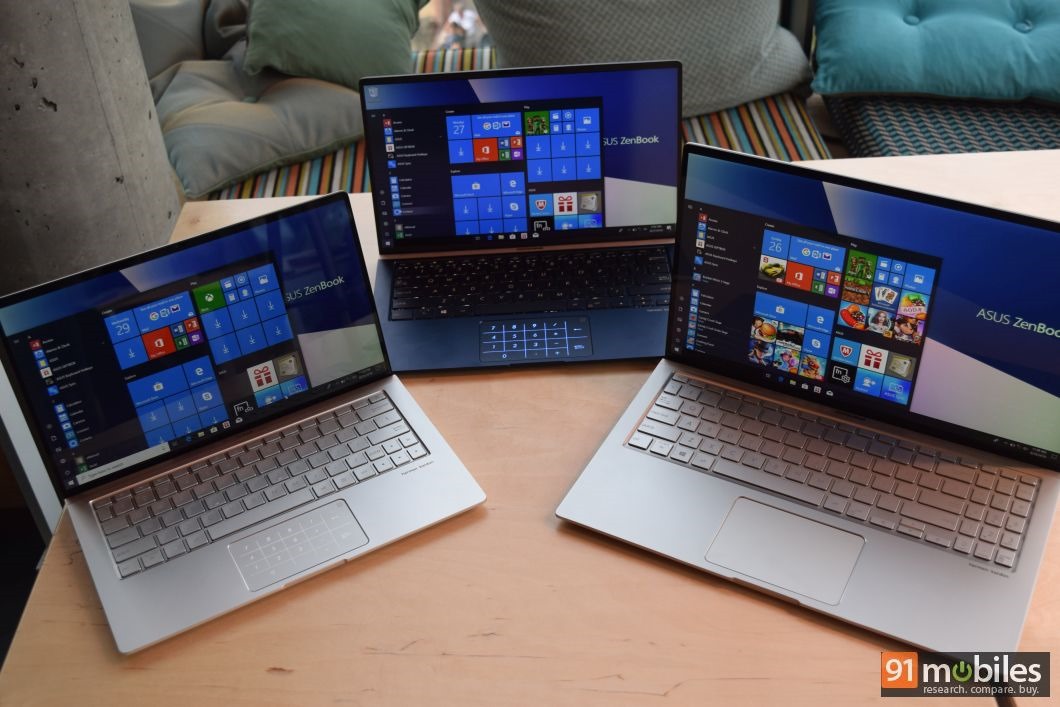 Before I begin with my brief experience with these laptops, if you are wondering how compact they are, then here’s a side-by-side comparison of the newer ZenBook 13 with the previous iteration on the right. As you can see, thanks to minimal bezels, the latest machine looks significantly smaller than its predecessor. The new ZenBook 13 also weighs less than its previous iteration. 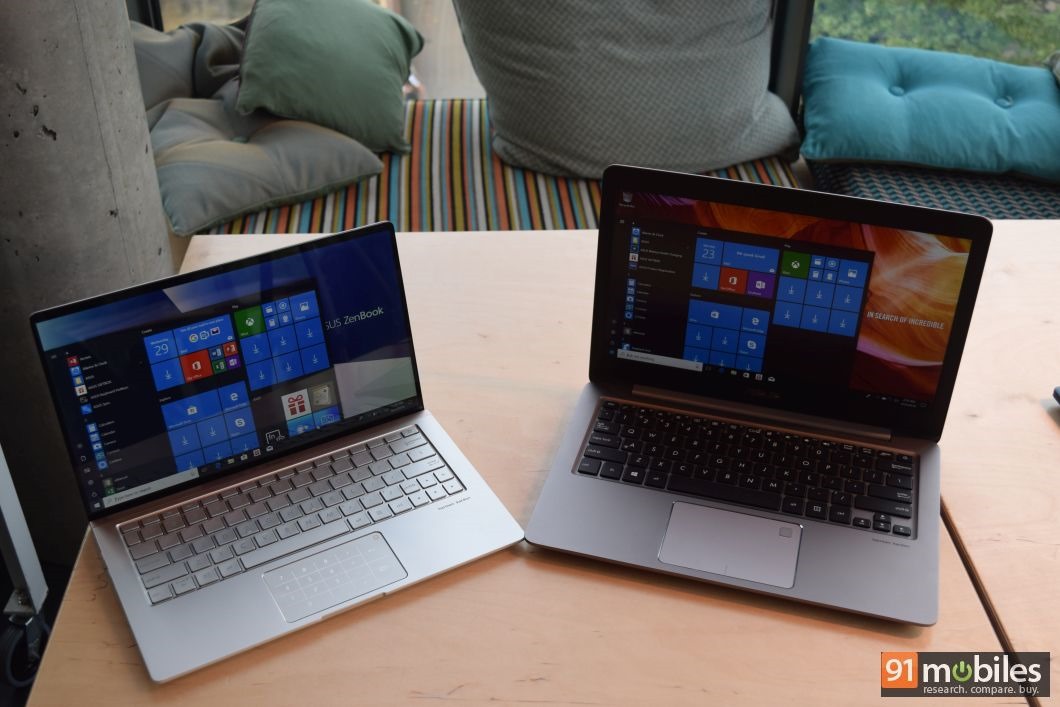 As far as the similarities are concerned, the trifecta ship with ASUS’ trademark concentric circles design at the outer lid. All of them are constructed out of aluminium, which gives them a solid feel. The good thing however, is the fact that they don’t feel bulky, though the largest of the trio, of course, weighs on the higher side. There’re no issues like screen flex either.

Both the ZenBook 13 and 14 also offer an innovative feature. Taking a page from ASUS’ ZenBook Pro (first impressions) laptops showcased at Computex this year that flaunt a ScreenPad instead of the traditional touchpad, the touchpad on the new machines doubles up as a number pad. What this means is that you can quickly type numbers from the touchpad area itself. The interesting thing is that you can continue using the region to navigate, and type only when you’re in an app that requires an input. You can also disable this feature if you find it confusing by simply long-pressing the button on the top right of the touchpad. During my use, the touchpad was fluid and precise, and I didn’t notice any visible difference with normal touchpads. In comparison, the ASUS ZenBook 15 continues with a normal touchpad, since it has a dedicated number pad area in the keyboard itself, owing to its larger size. 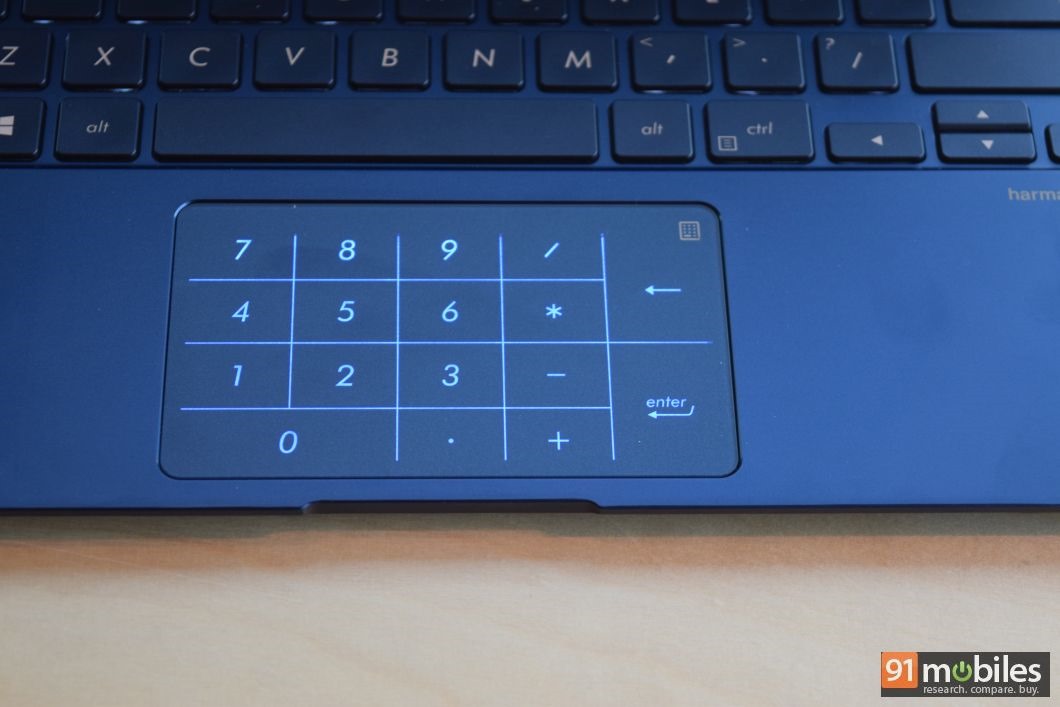 As the name suggests, the ASUS ZenBook 13, 14 and 15, ship with 13-, 14- and 15-inches screens respectively. They can be opened by single hand easily, and thanks to the ErgoLift hinge, the keyboard is slightly raised from the surface, making it easier to type. Thanks to the metal keys on the keyboard, they offer tactile feedback when pressed, and coupled with the good amount of travel on the keyboard, I was able to type quickly and accurately in almost no time.

The displays bear full HD resolutions, resulting in good sharpness levels, and brightness also seemed to be sufficient indoors. That said, the screens were quite reflective even though the laptops were kept in a room. I also liked the sound output of the new devices in the ZenBook series… it’s loud and punchy. The trio also supports face unlock, which is claimed to work instantly as the devices ship with the IR-based camera.

Hardware-wise, both the ZenBook 13 and 14 draw power from Intel’s 8th-gen Core i5 processors. The units I checked out were running Intel 8265U CPU clocked at 1.8GHz, which was paired with 8GB of RAM. The combination offered smooth usage, though I wasn’t able to push the processor with any sort of intensive task. For storage, the laptops are available with 256GB or 512GB storage.

The ASUS ZenBook 15 on the other hand, is fuelled by Intel’s 8th-gen Core i7 8565U chip. Coupled with 16-gigs of RAM, the laptop screams power and should be able to handle anything thrown at it. The machine is also made for gaming as it comes equipped with NVIDIA GeForce GTX1050 Max-Q graphics. Taking care of storage needs is a 1TB HDD.

The company hasn’t announced the pricing or availability details of the new Windows 10 Pro-powered laptops. However considering that India is an important market for the brand, and ASUS launched the machines it announced at Computex in India soon after, we expect the ZenBook 13, 14, and 15 to reach our shores sooner rather than later.