If there’s one laptop manufacturer who has its fingers in every pie, it’s undoubtedly ASUS. The Taiwanese giant’s ROG gaming laptops need no introduction, but as of late, the company has been stepping it up in the thin and light category too. That’s not all that surprising when you consider how the market has shifted in favour of business-class 2-in-1 machines. Recently, the company unveiled its latest 2-in-1 laptop dubbed the ASUS ZenBook Flip S, and after using it as my primary laptop for over two weeks, here’s what I make of it.

Let’s not beat around the bush, shall we? The ZenBook Flip S is a beautiful piece of craftsmanship and it easily tops my list of best-looking, portable laptops. I’ve been using the laptop intensively for over two weeks and I still haven’t gotten over how stunning it looks  – am I in love? I won’t deny the possibility. 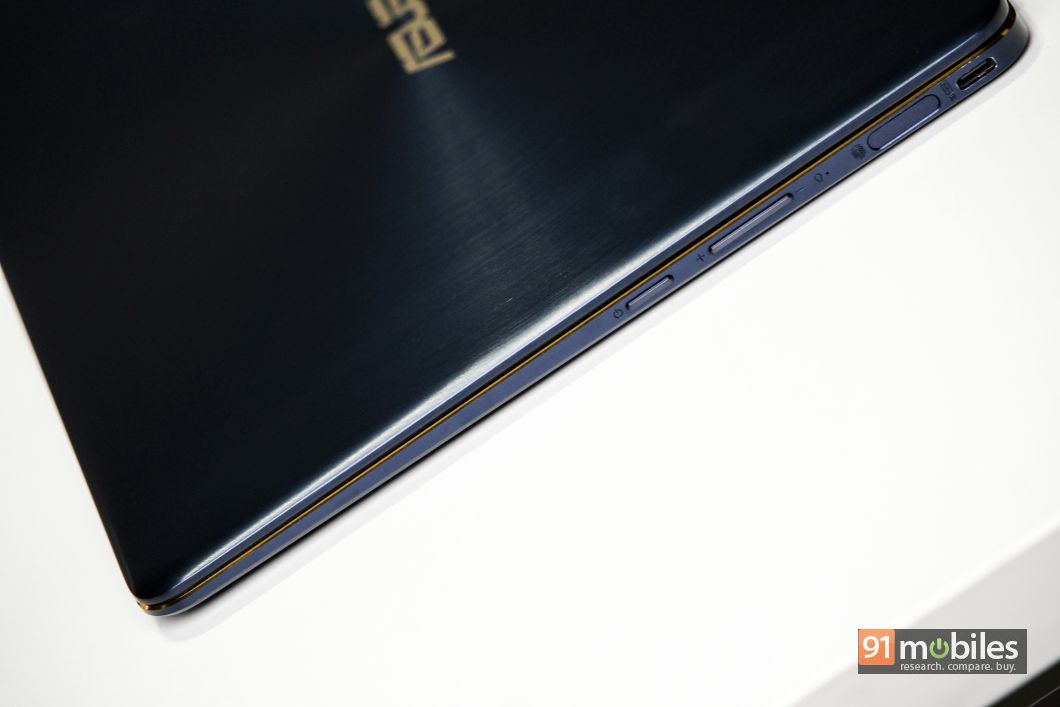 My review unit of the ASUS ZenBook Flip S shipped in a royal blue colourway, which is by far the most elegant hue I’ve seen on any laptop. What’s more, the machine even comes with golden accents which run alongside the borders of the base, lending the Flip S a luxurious appearance. And the ZenBook Flip S also features the concentric circular pattern on the lid, which is synonymous with most premium laptops from the brand. Suffice it to say, if you’re the type to go to important meetings in a classy bespoke suit, then you’ll want the ZenBook Flip S in your satchel. 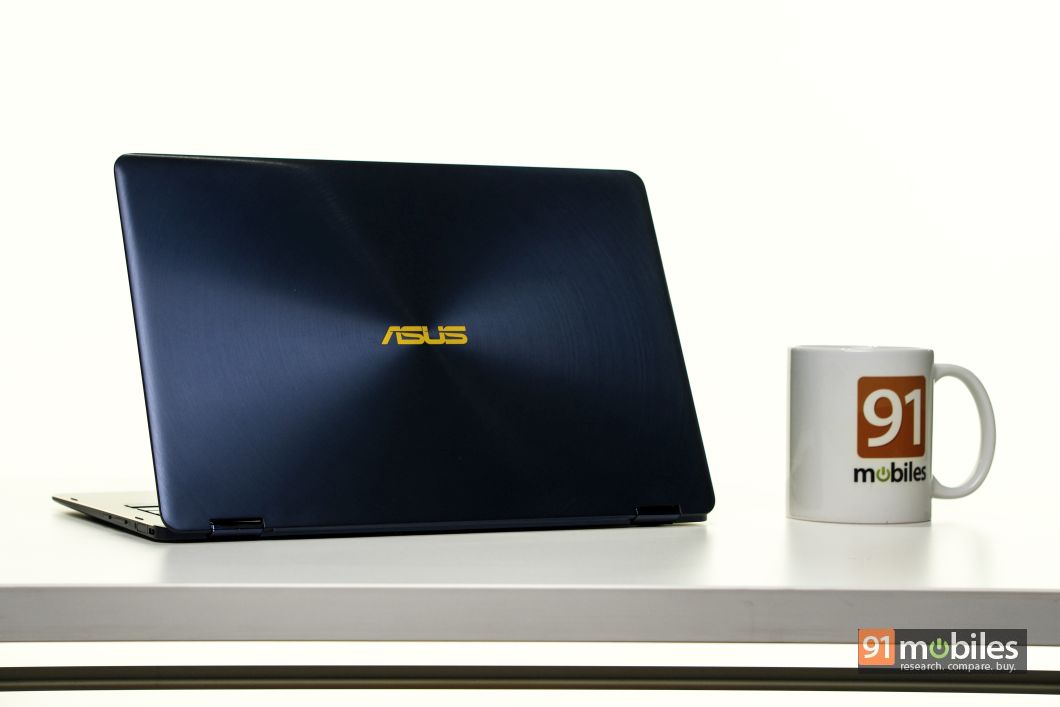 As for the materials used in the construction, ASUS’ ZenBook Flip S has been fabricated in entirety using aerospace aluminium. Unsurprisingly, the laptop feels really solid and I didn’t encounter any flex on the machine’s chassis or even the lid for that matter. Moreover, the laptop is featherlight too and tips the weight at just 1.1Kg. So much so, I had to double check if I even had the laptop in my bag when I initially started using it. 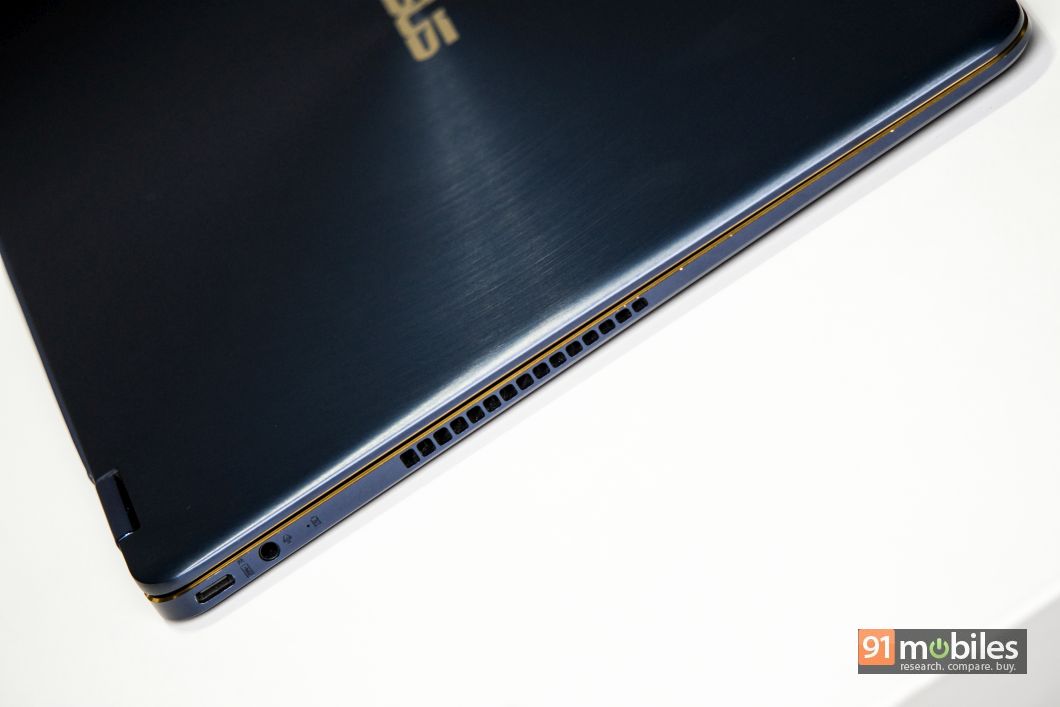 Now, some of you might not be aware that the Flip S held the record for the world’s thinnest convertible laptop until recently. The unit is just 11.2mm thick, which is a little thicker than an Apple iPhone X (review). Let that sink in. Now, as remarkable as the feat is, the Flip S’ sleek design does come with some compromises. For starters, the laptop ships with just two USB Type-C ports and a headphone jack. Therefore, you’ll have to resort to using the bundled dongle (which I didn’t receive with my review unit) to connect the laptop to an external monitor using HDMI or to plug in a USB drive. What’s more, I wasn’t sold on the rigidity of the hinge mechanism on the Flip S either and when positioned at an angle which is closer to 90-degrees, the laptop’s display wobbles quite a bit. 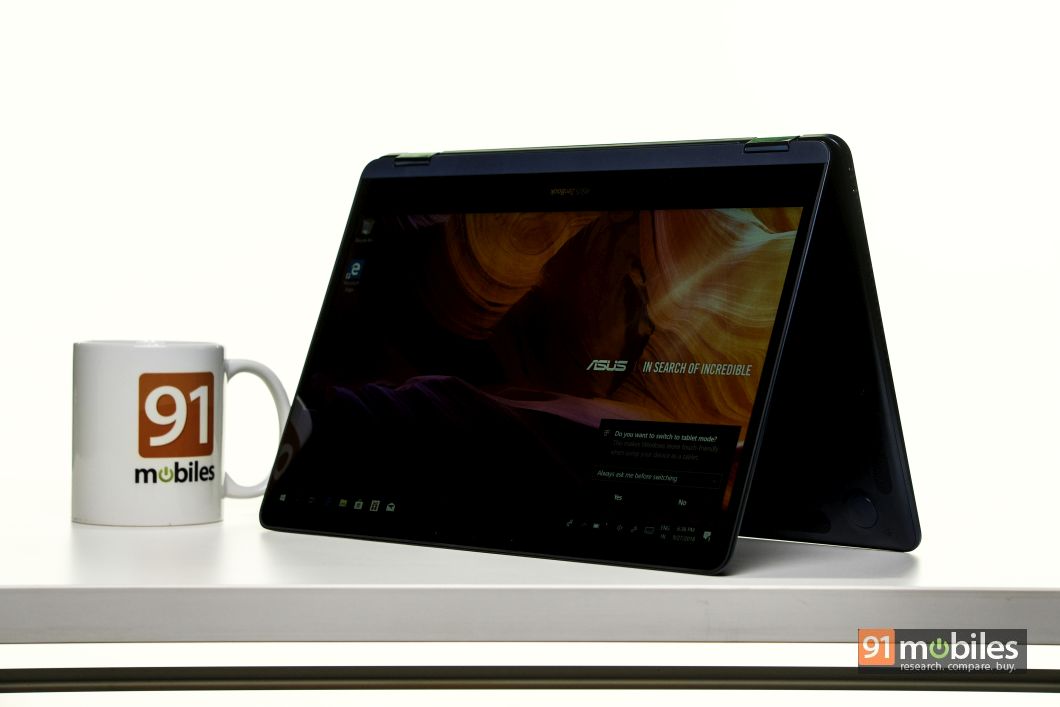 Moving on, the power button, the volume rocker as well as the fingerprint sensor (the laptop supports Windows Hello) have been positioned on the right spine of the Flip S’ chassis. While the placement of the buttons might seem odd at first, bear in mind that the Flip S can also be used as a tablet by flipping its display to the other side and folding it over the base. Now, I don’t know about you, but I’m yet to come across a tablet with volume controls on the front. Thankfully, it doesn’t take long to get used to the button placement. However, I do wish that the fingerprint sensor didn’t sit so flush with the laptop’s surface, as it makes it a little hard to unlock the machine at night. 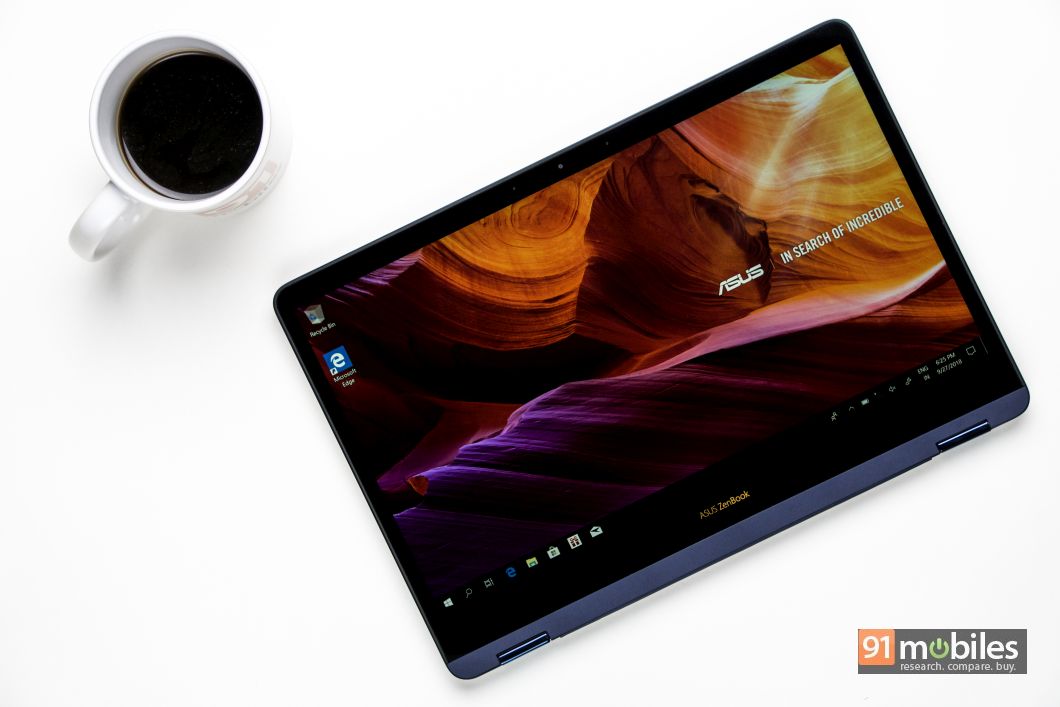 The ASUS ZenBook Flip S ships with a 13.3-inch LED-backlit full HD touchscreen which boasts wide viewing angles of 178-degrees. The display offers a pixel density of 331ppi and thanks to its sleek bezels, encompasses over 80 percent of the laptop’s frame. During my time with the laptop, I faced no issues with the panel’s quality – the text appeared sharp, the display got plenty bright and colours were vibrant too. What’s more, since it is a touchscreen panel, you can flip the display and use the Flip S as a tablet too. The touchscreen is quite responsive and you’ll even get a bundled digital pen with the laptop for more precise inputs. The digital pen has also been constructed using aluminium and it feels nice and comfortable in the hand. Moreover, the stylus’ input isn’t bogged down by terrible latency and everything considered, you’ll enjoy using it to doodle on the Flip S’ stunning display.

Contrary to popular belief, slim laptops can have excellent keyboards and the ZenBook Flip S is a testament to that. My job requires me to jolt down long-form articles on a daily basis and the keyboard onboard the Flip S is an absolute joy to type on. The keys offer a satisfactory tactile feedback, have decent travel and are backlit too. What’s more, the palm rest on the Flip S is extremely comfortable and I didn’t notice any flex around the keyboard either. 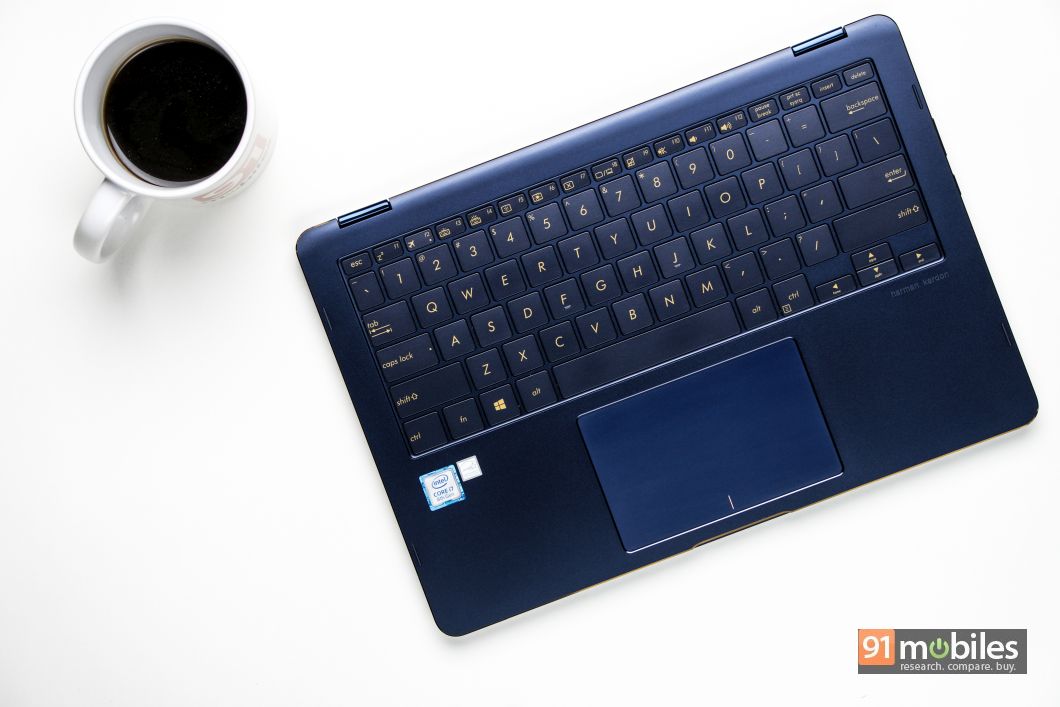 As for the trackpad, it uses Windows precision drivers and therefore, comes with support for various gestures. The trackpad has a smooth surface and is quite responsive. Ergo, I didn’t find much use for my Logitech wireless mouse whilst reviewing the Flip S. 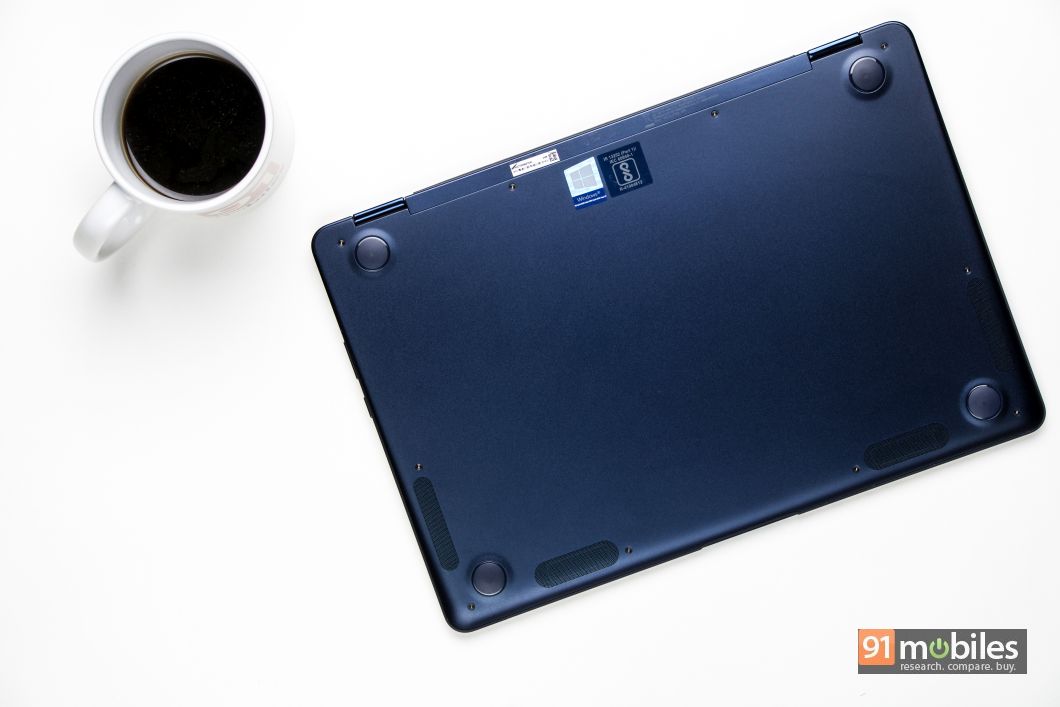 For audio, the ZenBook Flip S ships with a total of four speakers positioned at the base of the laptop. The speakers have been tuned by audio giant Harman Kardon and to a large extent, sound pretty good. That said, maxing out the volume causes the laptop’s chassis to vibrate ever-so-slightly which isn’t ideal, especially when you have the Flip S placed on your laps.

At the heart of the ZenBook Flip S is an 8th-gen Intel Core i7-8550U processor which works alongside 16GB of RAM and 512GB of solid-state storage. Therefore, it comes as no surprise that the machine boasts impressive performance to boot. On one occasion, I was running close to a dozen tabs in Google Chrome, had Slack running in the background, was listening to songs on Apple Music and even had Microsoft Word open for some document editing, all at once. However, the laptop breezed through all the tasks like a champ, leaving no room for complaints. 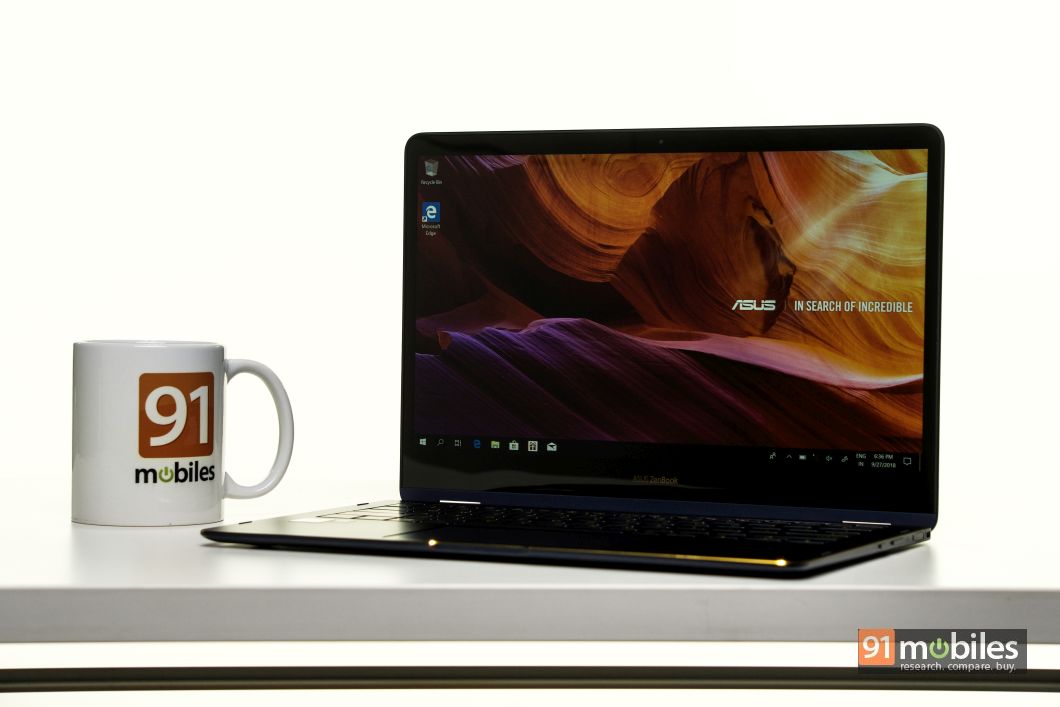 What’s more, the laptop’s chassis stayed cool to the touch too, maxing out at 40-degrees during heavy workloads. I did run a slurry of benchmarks on the laptop to give you a better gauge at the Flip S’ performance. Quite surprisingly, the laptop scored a total of 3,361 points, which is lower than what we achieved with the Core i5-toting ASUS VivoBook S406U. Our best guess is that the score takes a hit owing to the Flip S’ lower turbo as compared to the VivoBook S406U (review). That being said, the ZenBook Flip S’ CrystalDiskMark scores were on par with the competition and the laptop averaged 524MB/s read speeds and 452.7MB/s write speeds. Unfortunately, since the laptop doesn’t ship with a dedicated graphics card and instead makes use of an Intel UHD 620 GPU, you’ll have a hard time running any AAA titles on the Flip S.

The ASUS ZenBook Flip S is fuelled by a 39Wh Li-Po battery which simply put, just doesn’t cut it. On a good day, the laptop lasted me just a little over five hours and therefore, you’ll have to carry the bundled charger with the Flip S wherever you go. In the Battery Eater Pro test, the laptop drained completely in under two hours, which isn’t surprising.

The ASUS ZenBook Flip S is a gorgeous laptop which will undoubtedly turn heads every time you take it out of your bag. What’s more, ASUS has married style to substance with its latest offering and the Flip S offers solid performance and a gorgeous touch-screen display too. Unsurprisingly, the laptop commands a premium and the Flip S starts at Rs 1,30,990. 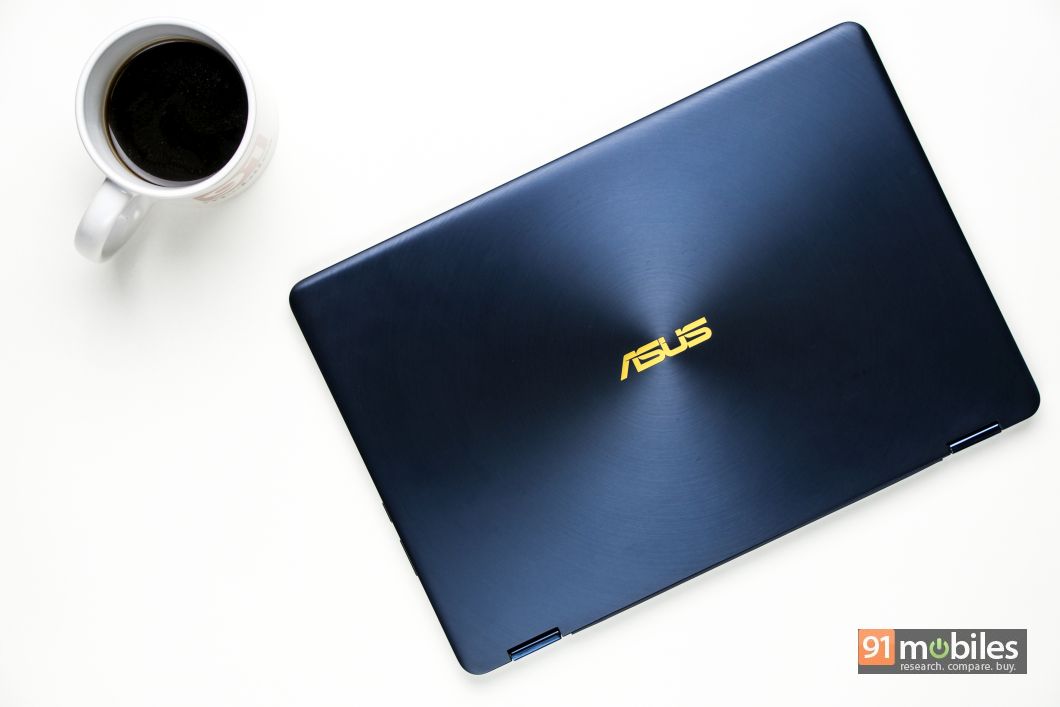 Now, I’m sure I don’t have to tell you that that’s a lot of money, and quite honestly, the Flip S would’ve been worth every penny if not for its abysmal battery life. Now, if you don’t mind splurging on a convertible and carrying its charger with you everywhere you go, then, by all means, buy the ASUS ZenBook Flip S. If the Flip S’ battery-life is a deal-breaker for you, then you can opt for similarly-priced Dell XPS 13 or the HP Spectre X360.