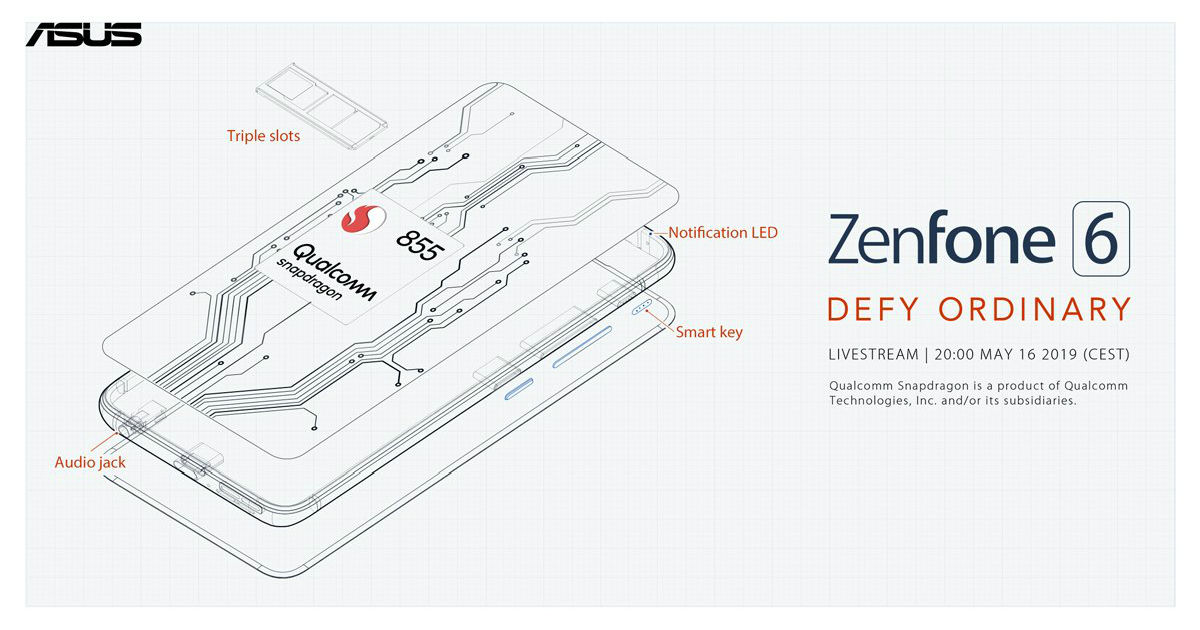 “A separate teaser suggests the ASUS ZenFone 6 may pack a 5,000mAh battery, a 48MP primary rear camera, and a 13MP selfie shooter”

ASUS is gearing up to unveil the ZenFone 6 series on May 16th at an event in Valencia, Spain. While the brand hasn’t been particularly vocal about the features of the handset, it recently shared a teaser image which seemingly hints at a bezel-less design. Now, just a few days ahead of the launch, ASUS has shared another promotional image on Twitter, confirming the upcoming flagship would indeed be powered by the mighty Qualcomm Snapdragon 855 SoC and will also have a dedicated smart key, whose functionality remains a mystery for now.

Keep the essentials. Come and join the livestream on May 16 2019 at 20:00 (CEST). #ZenFone6 #DefyOrdinary
Learn more: https://t.co/y3fiATPH71 pic.twitter.com/fJXefTldNV

Furthermore, the teaser also brags the presence of a 3.5mm audio jack, that is sadly missing from most flagships. The volume and power buttons are present on the right, while the SIM tray and dedicated microSD card slot are placed on the left; a notification LED will be present on the top. As for the dedicated smart key, it could be a hardware button to fire up Google Assistant.

Separately, Marcel Campos, head of global marketing operations, has shared an Instagram post with a morse code as a caption. Converting the same reveals ‘LIGUEPARA 855-4813-5000 EFALECOMSTEPHANPANTOLOMEU EDUARDO CAMPOS SILVA,’ message, which is basically the Portuguese language. Focusing on the part with number hints the phone will have a 48MP primary rear camera, which could be the Sony IMX586 sensor, and 13MP secondary shooter. The ‘5000’ in the cryptic message probably points to a 5,000mAh battery. However, previously leaked live images show triple camera setup and gradient colours, meaning there could be multiple variants.