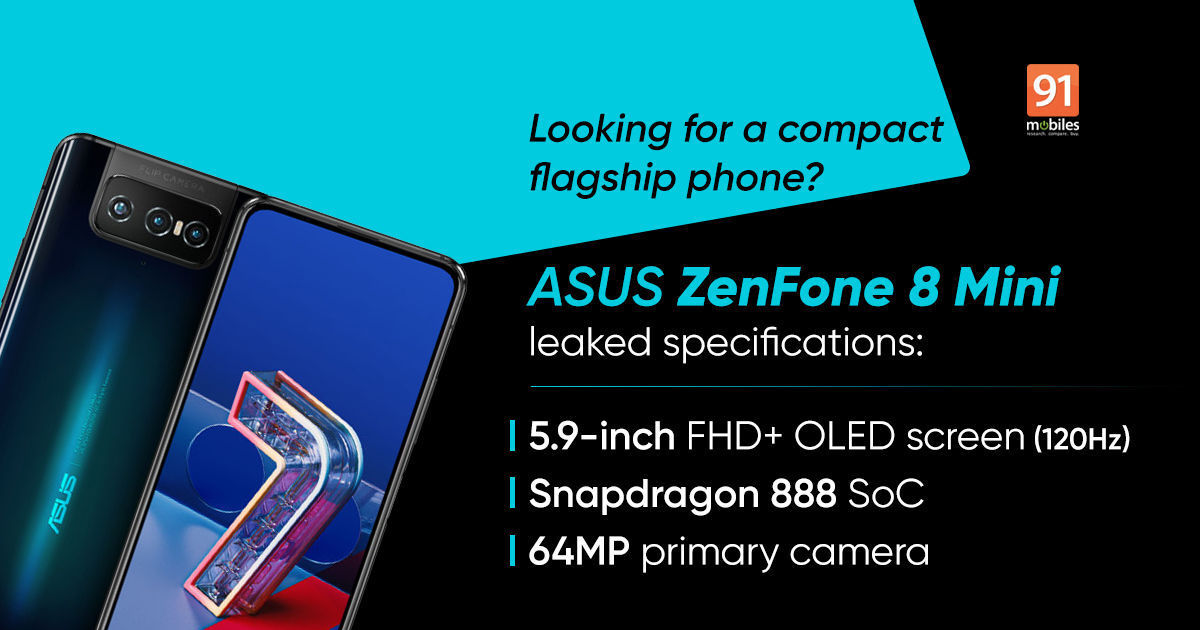 ASUS ZenFone 8 series is set to launch on May 12th and leaks have already told us a lot of the devices expected to be part of the lineup. As a launch teaser suggested, the ASUS ZenFone 8 series will be big in performance, but compact in size. This has led us to believe ASUS will indeed launch a compact ZenFone 8 Mini. In fact, we have even spotted key ASUS Zenfone 8 Mini specifications on Geekbench, which pretty much confirms its existence. Now another leak has given us more details about the Zenfone 8 Mini ahead of its launch.

ASUS ZenFone 8 Mini will be launching on May 12th. The new leak courtesy Dealitech suggests ASUS could launch the phone as Zenfone 8 Mini or Zenfone 8 Flip. It is expected to get a 5.92-inch OLED display with support for a 120Hz refresh rate. Under the hood, the phone is likely to use Snapdragon 888 SoC. Asus will launch Zenfone 8 Mini in multiple versions.

As per the leak, the Zenfone 8 Mini will come in as many as five configurations – 6GB+128GB, 8GB+128GB, 8GB+256GB, 12GB+256GB, and 16GB+256GB storage. This will make ASUS ZenFone 8 Mini one of the few phones to offer 16GB RAM in the market. The device will get the Android 11-based Zen UI version. And rumours point to ASUS using the new IMX686 and IMX663 camera sensors for the 64MP primary rear camera. Going by these features, it is possible that ASUS ZenFone 8 Mini/Flip price could be around the Rs 40,000 bracket which will pit it against OnePlus 9R and Xiaomi Mi 11X Pro among others.

The ASUS ZenFone 8 series launch is just another a few weeks away, so we’re hopeful of getting more information about the products to be announced in the coming days.