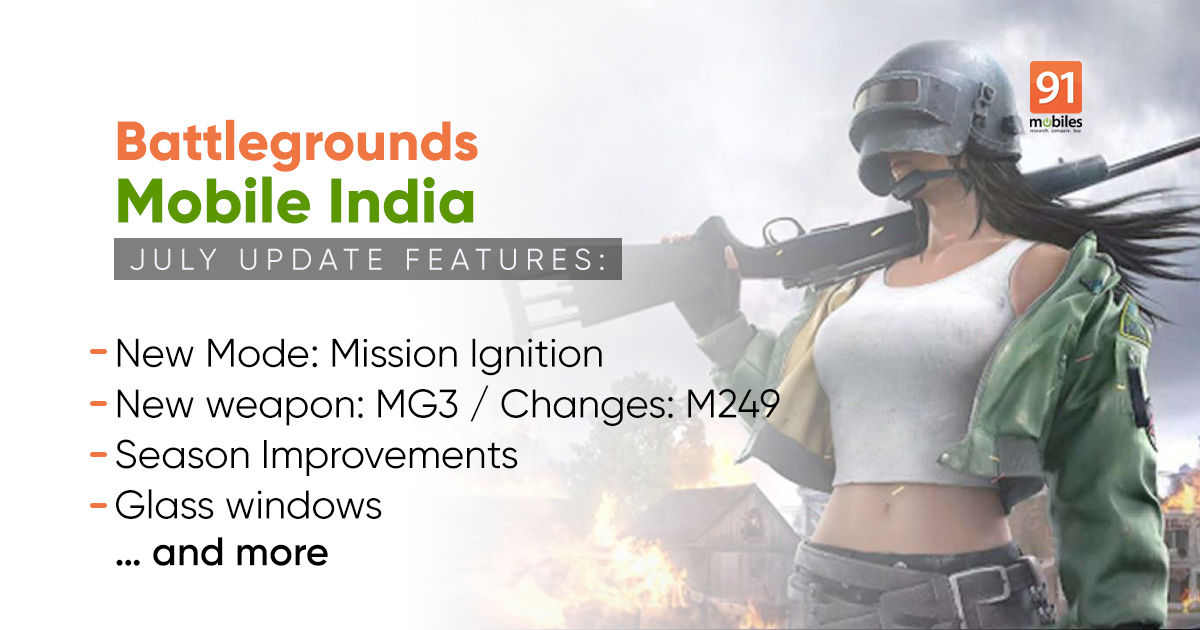 Battlegrounds Mobile India (BGMI) July update new features and improvements have been revealed by the company. The update adds new weapons, gameplay mode — Mission Ignition, gravity vehicles, the ability to set customised sensitivity for each gun and save the settings to the cloud, more graphic options for low-end devices and much more. The BGMI July update also includes improvements to the current season, ranking and the overall game settings. The 90fps mode is now available on more devices. However, Battlegrounds Mobile India iOS availability hasn’t been revealed at the moment, but it is expected to drop in the next few weeks, if not months.

Battlegrounds Mobile India July update removes M249 gun from airdrops and has now been placed in field drops and the gun will now be available in all classic maps except for Karakin map. The update replaces the M249 gun with an MG3 gun and it can be found in supply crate drops. MG3 is a light machine gun that takes 7.62mm ammo and has 75 bullets in a magazine round. Dropped scopes will no longer be auto-picked, thanks to the new ‘do not auto-pick up dropped scopes’ option in settings. After winning a match, players can now erect a bronze statue.

There’s a new NPC Ray mini TV companion that updates you on important news in the lobby and helps you navigate. Furthermore, glass windows have been placed in more locations in Erangel and Miramar maps. The update reduces the Royale Passes duration to one month from two and has also brought down the tier levels.

Ignition Mode: There’s a new Ignition Mode, that will be placed within the Erengal map for the time being. In this mode, there will be a total of 6 high-tech locations, including Transit Center, Georgopol, Tech Center, Sosnovka security centre, logistic agency and energy centre. In this mode, while dropping on the game field, places names will be displayed in 3D and there are Hyperline high-tech vehicles that fly in the air, using which players can commute from one location to another in the game. However, it will be available for a limited time during the gameplay and the routes are pre-fixed.

Also read: Battlegrounds Mobile India UC purchase: How to get UC in BGMI through redeem codes, in-game purchase, and more

The Ignition Mode has a self-driving semi-truck that drives around in pre-fixed locations and is filled with supplies. Players can attack it with guns and grab the loot. The mode also includes G-38 gravity-free vehicle that flies above the ground level and can accommodate two players. It can fly over land and water, making it a better choice to travel across all locations. ASM Abakan is a new assault rifle for Ignition Mode that takes 5.6mm ammo and can shoot 30 rounds in a single magazine.

In the minimap, following a puppy icon takes you to a special patrol dog that helps you locate items in the gameplay. Using the tactical marking device, you can see in which direction your friend is shooting and where the enemy is at. There’s RiotSheild that lets you protect yourself from a shooting enemy by placing a shield in front of you. It can’t be moved once it’s placed.

You can check out the preview of all the changes mentioned from here.