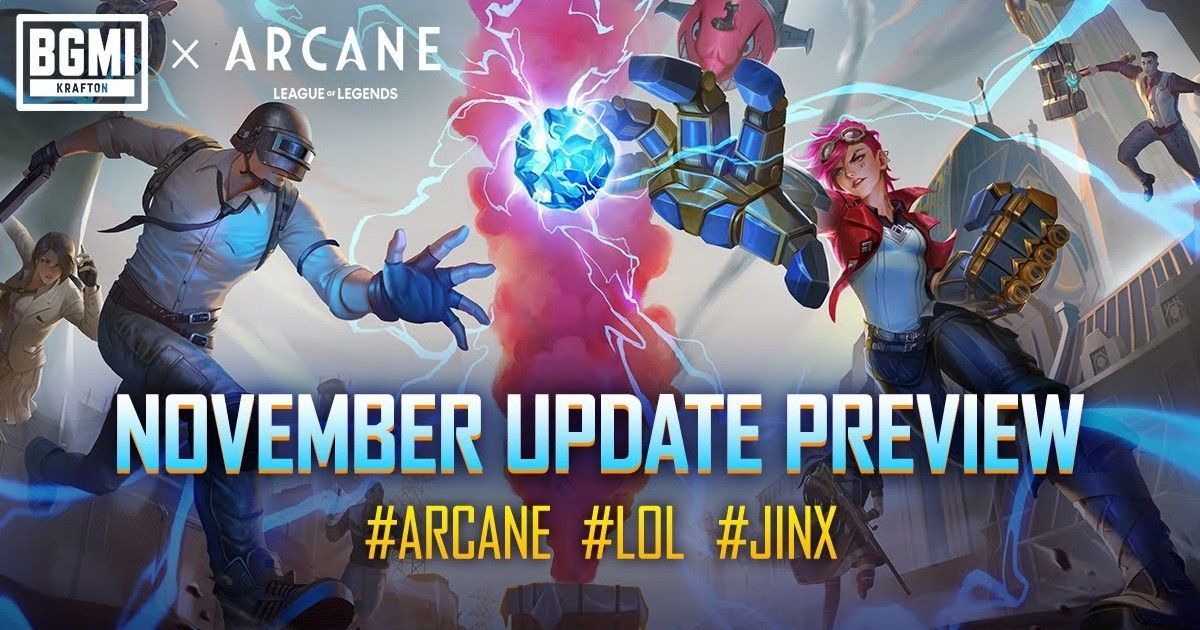 Krafton has shared details about the upcoming Battlegrounds Mobile India 1.7 update. BGMI is getting a crossover with the new League of Legends Netflix series, Arcane, which brings the new Mirror World Theme mode. Along with these, BGMI gets new gameplay features such as piggybacking and grenade indicators with the new update. Krafton has also revealed that players who download the new BGMI update 1.7.0 will get two Classic Crate Coupons. The prices for Premium and Classic Crate Coupons will also be reduced with the new update.

Battlegrounds Mobile India 1.7.0 update will roll out on November 19, 2021, for Android and iOS devices. Players can update the game via Google Play Store or App Store to access new content. The November update distribution schedule for Android and iOS is listed below:

All BGMI players will most likely be able to check out new content on November 19 at 8 AM IST.

Here’s what you will get in the upcoming Battlegrounds Mobile India update:

Mirror World Theme Mode will take place on Erangel, Sanhok, and Livik maps. The mode will feature Mirror Islands that will spawn on these maps at random locations. At the beginning of each round, the map will show when and where the Mirror Island will spawn. Once you go to that location, you will see a Wind Barrier that will teleport you to Piltover Mirror Island or Zaun Mirror Island. Both Piltover and Zaun are regions from League of Legends. Once you spawn in the Mirror Island, your character will transform into Vi, Jinx, Jayce, or Caitlyn from Arcane. Each character has a specific set of weapons and abilities that you can use to defeat your enemies. If you want to check out a different character, you can do so by standing on the Transformation Device on Mirror Island. The Mirror Island will also feature Arcane monsters that you can kill, and Hextech Chests that contain in-game items.

The Mirror Island will be disabled after some time and players will be dropped on the map again. You can find and collect Hextech Crystals on Erangel, which will give you access to Dynahex Supply Shop after you collect enough crystals. The Dynahex Supply Shop features weapons, ammo, armour, weapon mods, med kit, grenades, first aid kit, and more. You can defeat Arcane monsters on Erangel to get more Hextech Crystals.

With the November 2021 update, BGMI will allow players to piggyback downed teammates and enemies. This can turn out to be life-saving if you manage to carry your teammate to safety before reviving them. It should be noted that you cannot shoot, sprint, or ride a vehicle while piggybacking. Along with this, the game has a new indicator for grenades and a new smoke effect on smoke grenades.

These changes will not apply to Supply Crate Coupons. Along with these, players will now need 5 scraps to combine and create a Premium Crate Coupon, instead of 10. Other Crates will require 10 scraps for a Coupon.

Krafton has also shared details about the exchange ratio between the old and new Crate Coupons and Scraps:

All Crate Coupons and Scraps will get new icons with the BGMI November 2021 update.