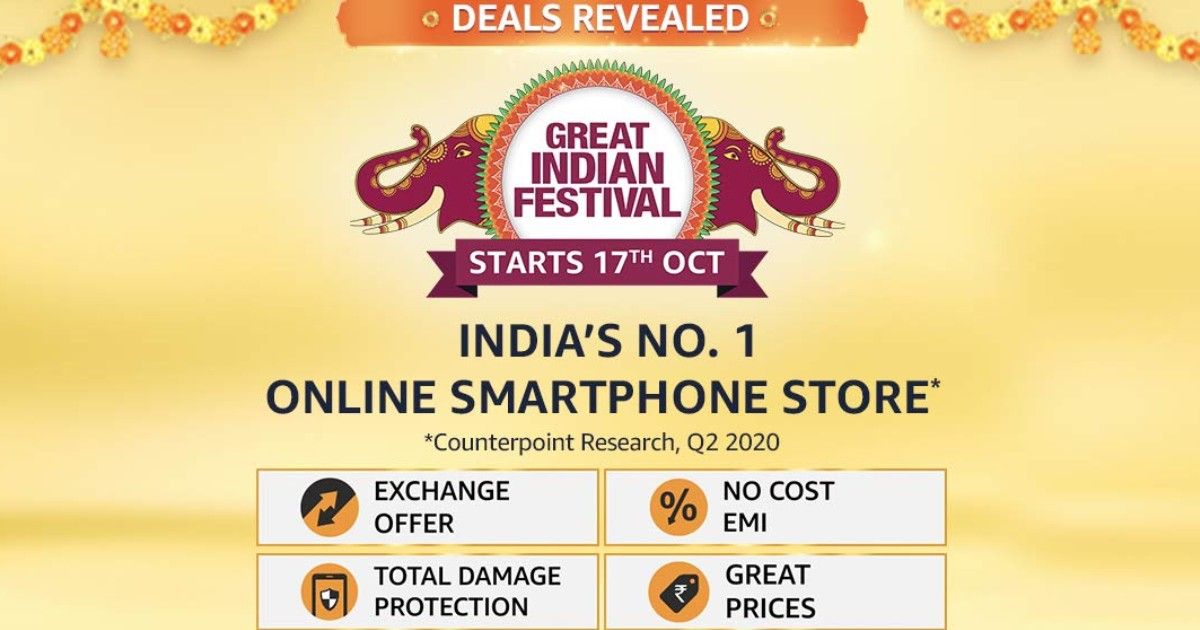 Amazon Great Indian Festival 2020 sale deals on smartphones, laptops, smart TVs, accessories, and other electronic devices have been revealed. The sale, which begins from October 16th for Prime members and October 17th for all, will see iPhone 11, OnePlus 8, Samsung Galaxy M51, Redmi Note 9 series, and more selling at their lowest prices ever. HDFC Bank credit and debit card users can avail 10 percent instant cashback on top of the discounts on these smartphones. There will be exchange offers, no-cost EMI, and other offers for the customers as well. Here are some of the best Amazon Great Indian festival deals we could spot.

Amazon has revealed that the last year’s flagship phone from Apple, iPhone 11, will be available at Rs 47,999 for the base 64GB storage variant during the Great Indian Festival sale. The phone otherwise costs Rs 54,900 after the recent official price cut. 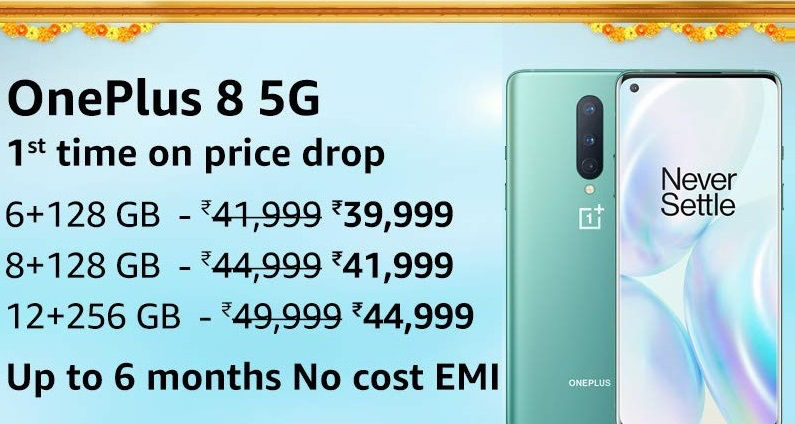 The Samsung Galaxy M51 price in India will be cheaper by Rs 2,500 on Amazon.in. Interested customers can purchase the handset that rocks a mammoth 7,000mAh battery at Rs 22,499. This is down from Rs 24,999 for the base model.

Redmi Note 9 Pro will be selling at Rs 12,999 on Amazon.in. That’s Rs 1,000 less from the actual MOP of the handset for the 4GB RAM variant. The smartphone was launched earlier this year with mid-range specifications such as dot notch FHD+ display, Snapdragon 720G SoC, 5,000mAh battery, and 48MP quad cameras.

The newly launched Samsung Galaxy M31 Prime price is set at Rs 16,499, but it can be bought for an effective price of Rs 15,499 thanks to a Rs 1,000 cashback on the Amazon Pay wallet. You also get complimentary three months Amazon Prime subscription with the phone. The handset rocks 64MP quad rear cameras, Exynos 9611 SoC, Infinity-U sAMOLED display, and a beefy 6,000mAh battery.

Redmi Note 9 Pro Max will be selling on Amazon.in with a Rs 1,000 discount during the sale. This brings the cost of the phone down to Rs 15,999 from Rs 16,999. The handset rocks pretty much the same specifications as the Redmi Note 9 Pro, but with 64MP quad rear cameras and faster-charging tech.

The Redmi 9 and Redmi 9 Prime will be available with Rs 500 Amazon Pay cashback, bring their effective prices down to Rs 8,499 and Rs 9,499, respectively. The budget offerings from the brand come with a 6.53-inch display, AI quad rear cameras, and a beefy battery.

The Redmi Note 9 is the cheapest smartphone in the company’s Note 9-series family. The handset is currently retailing at Rs 11,999, but you can grab it for Rs 10,999 during the Amazon sale. The phone also comes with 48MP quad rear cameras and a 6.53-inch FHD+ display.

These are some of the top offers that’ll be available on Amazon Great Indian Festival sale 2020. In addition, Samsung flagships will be retailing with up to Rs 34,000 discounts, up to Rs 23,000 off on OPPO smartphones, up to 30 percent off on Vivo, Tecno, iTel, Coolpad, Lava, and other popular brands. Amazon is also giving away mobile accessories starting for as low as Rs 49, power banks with up to 80 percent, and headsets starting at Rs 149.

The TV and home appliances will be available with up to 75 percent discount, no-cost EMI, and one-year extended warranty starting at Rs 99, total protection plan starting, and 48hrs installation with safe, scheduled deliveries. Here’s a sneak peek at some of the deals

Amazon Great Indian Festival Sale deals revealed, to offer up to 40 percent off on smartphones