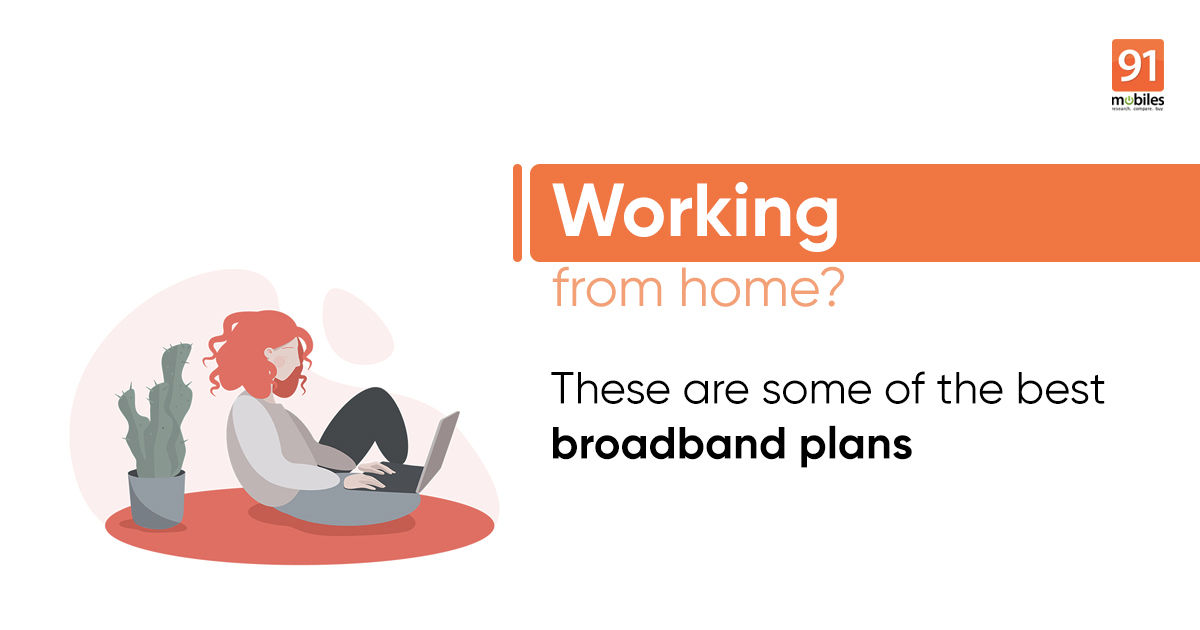 With the 21-day lockdown in place, our reliability on the internet has swelled up. The mobile data does work but comes with its own limitations. You probably don’t want to exhaust it while working from home, video calls, streaming movie, and downloading a big file or document, among other things. That’s where broadband comes handy. Unlike mobile data, there’s no daily limit on broadband for consuming high-speed internet. So, we have listed the best broadband internet plans from Jio Fiber, Airtel, Hathway, ACT, Tata Sky, and more.

Jio Fiber has as many as seven broadband plans in its folio. They start from Rs 699 for the Bronze plan and go up to Rs 8,499 for the Titanium plan. The plans are bundled with offer free voice calling within India, home networking for content sharing, TV video calling, gaming, and Norton device security support for five devices. Additionally, Jio is providing 10Mbps broadband to new users and double data to existing users amid COVID-19 outbreak. Check out all Reliance Jio Fiber broadband plans below:

Airtel broadband, dubbed as Airtel Xstream, has its plan starting from Rs 799 for the 100GB speed and 150GB data for a month. This goes as high as Rs 3,999, offering speed of 1Gbps and unlimited data. The free voice calling and other benefits of Airtel Xstream are also included with the plans. Airtel also allows customers to opt for unlimited data for an additional Rs 299 per month. The broadband plans may vary according to regions.

ACT has an array of broadband plans, all with different benefits. The base plan, dubbed as ACT Silver Promo, is priced at Rs 749 that offers 100Mbps speed and 500GB data for a month. Then there is ACT Platinum Promo at Rs 999 and ACT Diamond at Rs 1249, which offer Netflix subscription and 150Mbps speed for the respective data cap of 1000GB and 1250GB. ACT also has broadband plans with 2500GB, which cost Rs 4,999 a month. Due to the ongoing coronavirus pandemic, the company has upgraded speeds of its broadband subscribers to as high as 300Mbps and providing them with an unlimited fair usage policy (FUP) until March 31st.

Unlike others, the Hathway broadband plans don’t come with a monthly subscription. You’ll either have to quarterly, half-yearly, or yearly for the plans you choose. The most affordable Hathway plan, which costs Rs 2,549 for three months, offers 50Mbps data for 50GB data a month. The top-end plan, meanwhile, will set you back to Rs 4,499 for 50Mbps speed and 200GB monthly data.

Tata Sky broadband plans come with unlimited data caps. The most affordable plan is Rs 900 a month that offers data speed of 25Mbps. If you go slightly up the ladder, there is Rs 1,000 broadband plan from Tata Sky with 50Mbps speed. The highest unlimited plan will set you back to Rs 1,100 for a maximum speed of 100Mbps. Users have the option to pay for these Tata Sky broadband plans quarterly, six months, and yearly, and avail exciting discounts such as free installation and a router, irrespective of a fixed or unlimited data cap.

State-owned telco introduced a Work@home broadband plan at free of cost. Under the scheme, users will be provided 5GB daily data at 10Mbps and once the data is exhausted the speed would come down to 1Mbps per day. There’s no FUP limit on the plan. It’s available in all regions including Andaman and Nicobar; however, only the BSNL users with a landline connection will be able to avail this plan at free of cost. For others, there are pan-India Bharat Fibre plans that start at Rs 749 and go all the way up to Rs 16,999 for a whopping 170GB data per day.