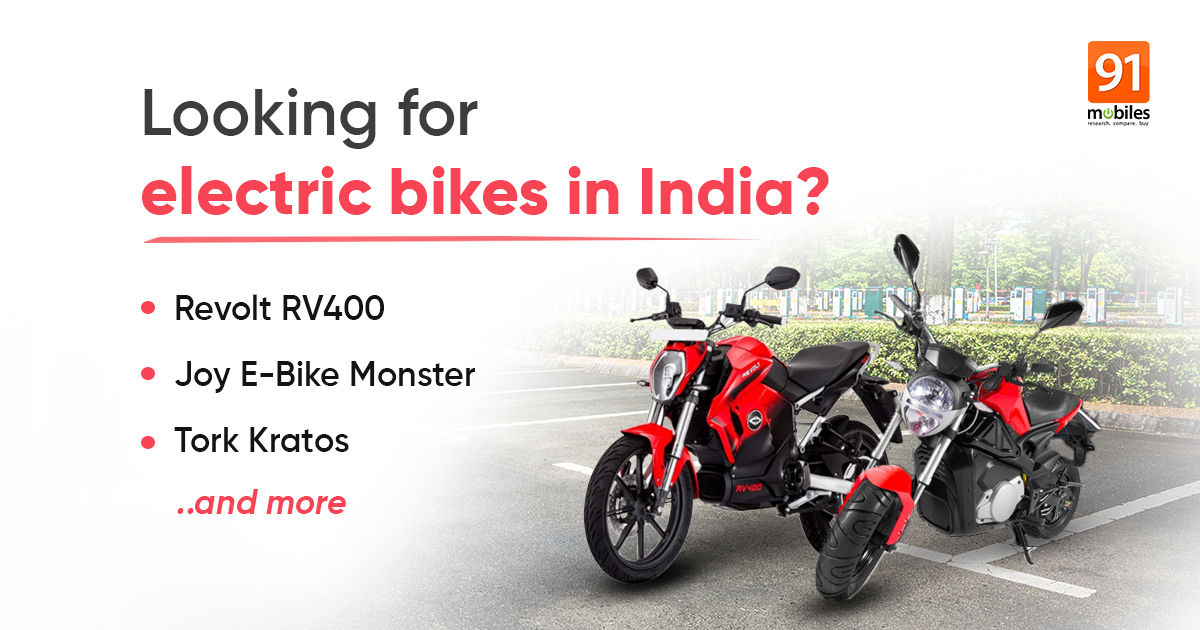 As fuel prices continue to rise, electric vehicles have been gaining popularity more than ever. Despite the fact that India’s EV infrastructure is in a nascent stage, what pulls potential buyers towards electricity-run vehicles are their higher efficiency, low maintenance cost, and zero emission. The demand for electric two-wheelers is certainly more than the four-wheelers as the former requires less space and can be charged comfortably from home. As a result, many brands including new entrants have brought electric bikes and scooters across various price segments into the country. In this article, we’ll take a quick look at the best electric bikes you can buy in India along with their mileage, specifications and price. So without further ado, let’s begin. 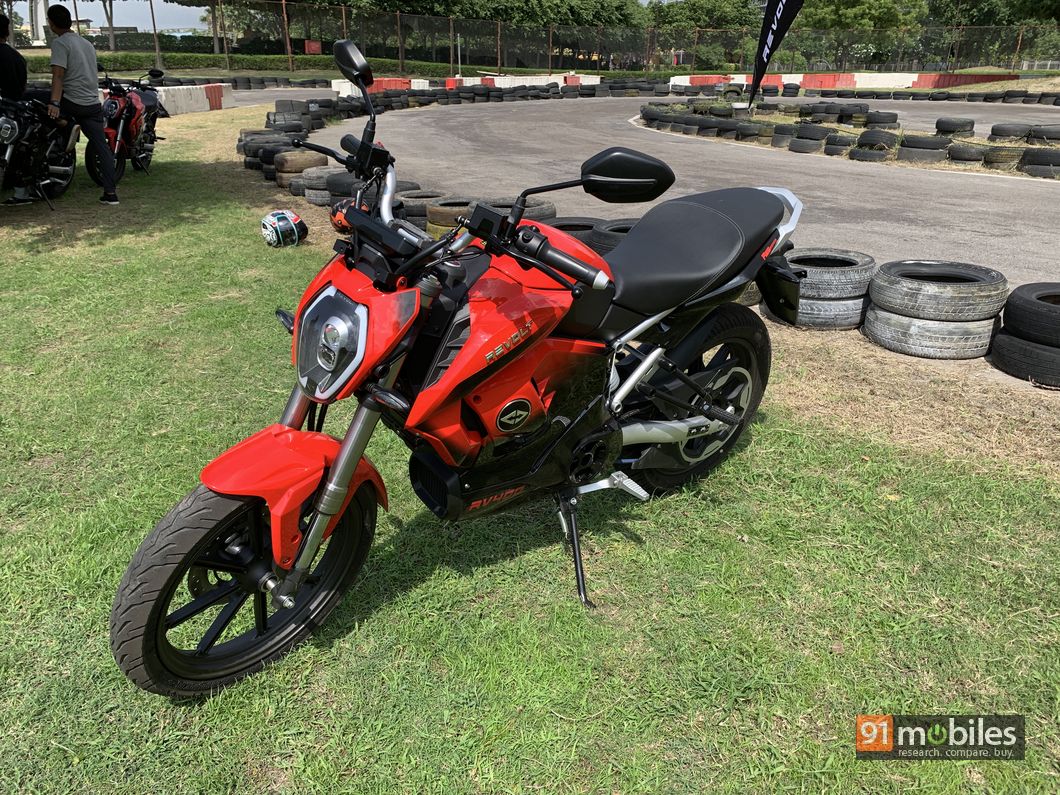 Starting with Revolt RV400, this electric motorbike comes with a slim design profile with various stylish aesthetics such as hexagonal-shaped headlights. Coming to the speeds and mileage, the RV400 claims to have top speeds of 85km/hr and a range of up to 150km on a single charge. The bike gets its juice from a 3.24kWh lithium-ion removable battery, which can be charged via a 15Amp portable charger that can take the battery from 0 to 75 percent in 3 hours. It also comes with a dedicated mobile app called ‘MyRevolt’, which can show the rider nearby charging stations, battery stats and tweak various bike settings such as changing sound outputs.

Where to buy Revolt RV400

Revolt has set up its dealerships in various cities and states of India such as Delhi, Bangalore, Surat, Pune, Kolkata, Mumbai etc. One can simply walk into the preferred dealerships mentioned on the company’s website to book a test ride and make a purchase of the RV400. 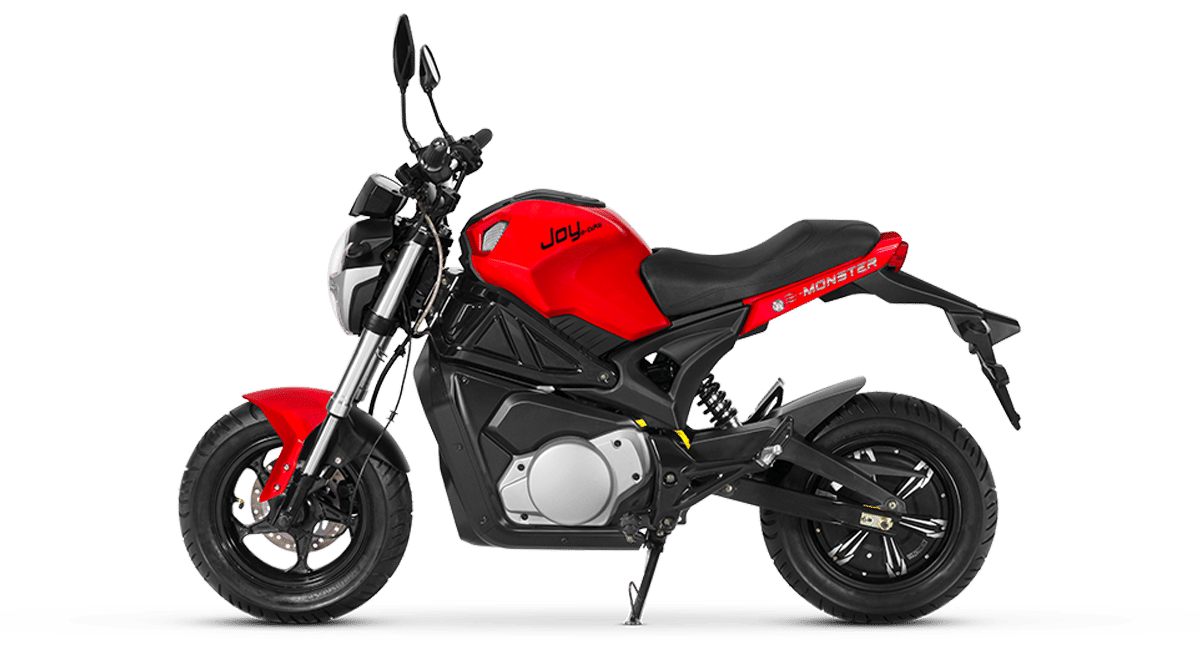 The Joy E-Bike Monster is a mini electric bike that packs in some decent specs for its size. To begin with, it features a 72V lithium-ion battery which is able to cover 95km on a single charge. The notable feature about the Joy E-Bike is the mono-shock suspension system which ensures smooth and stable handling of the bike on bumpy roads. The charging is taken care of by a portable charger that juices up the battery from flat to full in around 5 to 5.5 hours. The bike consumes only 3.3 units of electricity for a full charge. It is available in three colours which include red, black and white.

Where to buy Joy E-Bike Monster

To book the Joy E-Bike Monster, you can head over to the company’s official website and fill up an enquiry form with the necessary details such as name, phone number and city. Accordingly, they will reach out to you with the details. 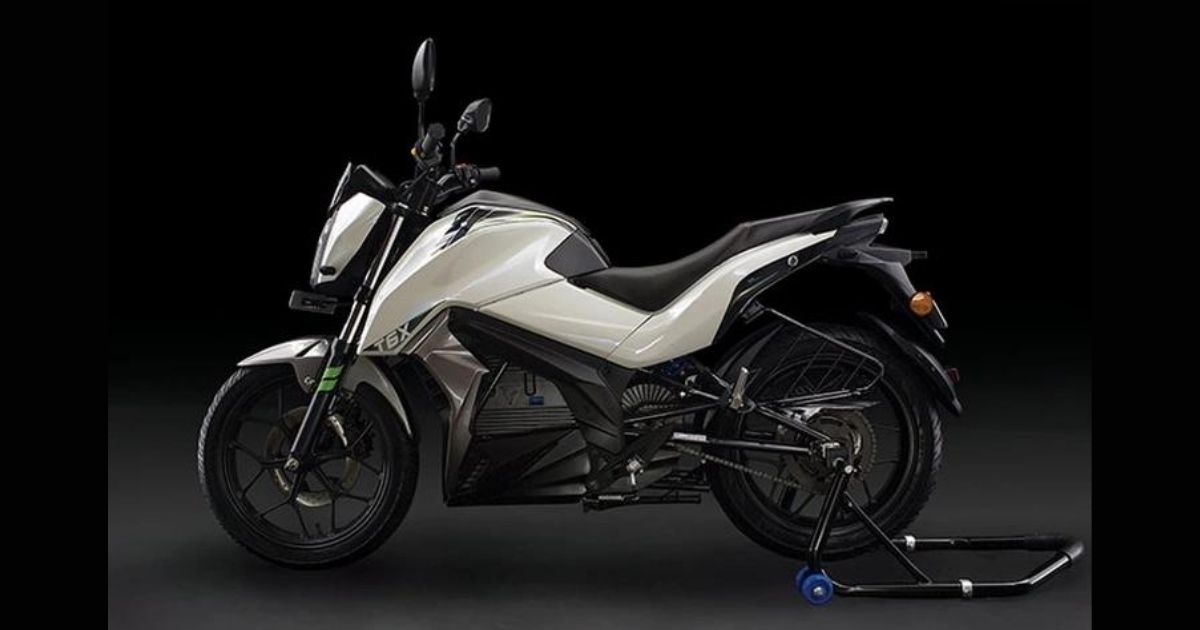 The Tork Kratos R is a souped-up variant of the vanilla Kratos and improves upon a lot of things. For starters, the Kratos R has a certified range of 180km instead of 120km and a top speed of 105km/hr. It is powered by a 4kWh lithium-ion battery which can be fast-charged to 80 percent in 60 minutes. That said, Tork provides access to its fast-charging network of charging stations for the first two years for free. On top of that, it is loaded with some nifty smart features such as geofencing, motor walk assist, find my bike function, crash alert and even a vacation mode. The Kratos R comes in white, red, black and blue colours.

Where to buy Tork Kratos

You can book a Tork Kratos through the brand’s website by filling up the booking form and depositing a refundable fee of Rs 999. 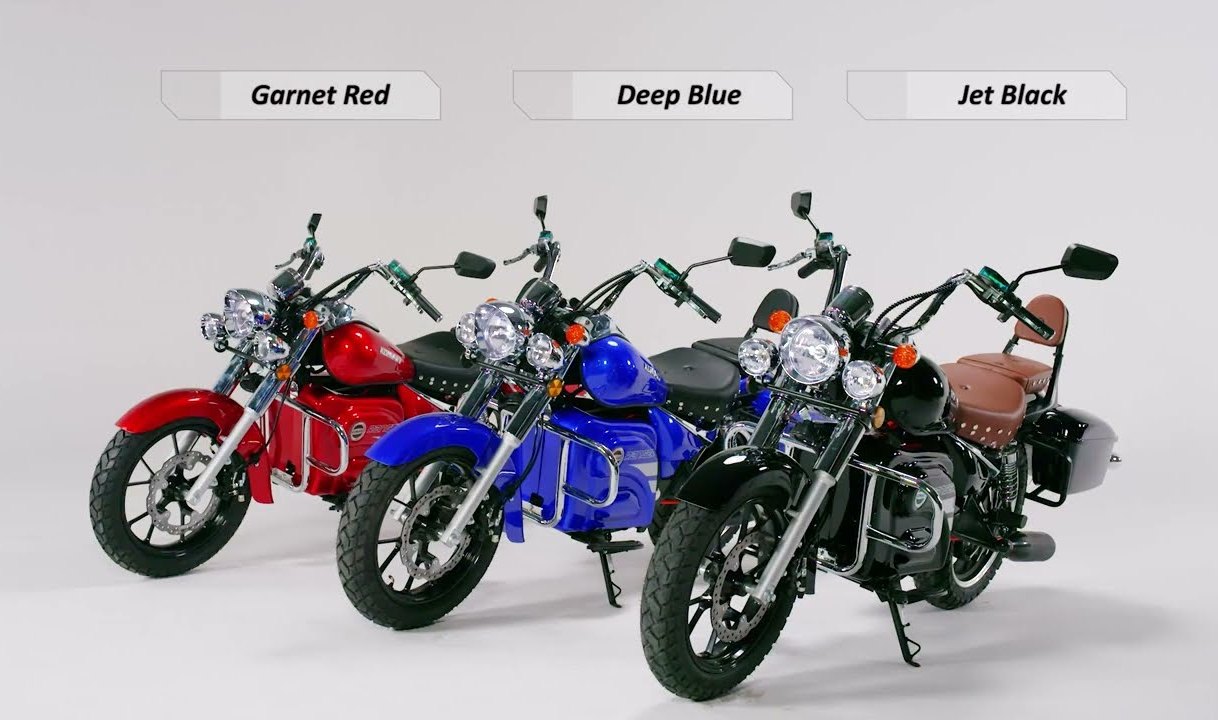 If you’re a bullet bike fan and want an electric version of the same then look no further than the Komaki Ranger electric cruiser. This electric bike has one of the biggest batteries in an electric two-wheeler at 4kW which is able to provide a range of 180-220 km on a full charge. Apart from that, it packs a 4000 Watt motor to keep the things running. The Komaki Ranger also has features such as a mobile charging unit, a whole Bluetooth sound system to take advantage of the embedded features as well as dual exhausts (just a cosmetic part for an electric vehicle) with flame and sound effects. It comes in three different colours including black, blue and red.

Komaki has priced the Ranger at Rs 1,74,500 which is the ex-showroom price for Delhi.

Komaki is taking bookings for the Ranger on its website. Interested buyers can head over to the bookings page and enter the necessary details to get a response from the company. 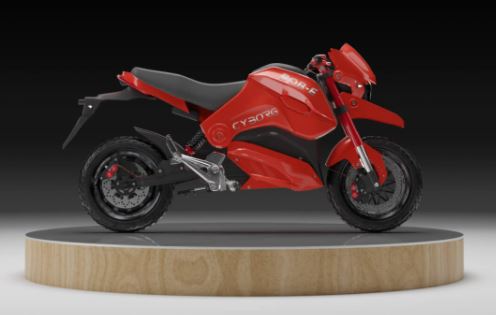 Launched in early 2022 by Ignitron Motocorp, the Cyborg Bob e-bike is a made in India electric motorcycle targeted towards teenagers and young adults. This dirt bike inspired motorcycle is claimed to have top speeds of 85 km/hr and draws power from a 2.88 kWh lithium-ion removable battery. This battery is able to provide the bike with a mileage of 110 km on a single full charge and can be topped up from 0 to 80 percent in 3 hours using the 15 Amp home charger. For a full charge though, it’ll require 4 to 5 hours using the same charger. Apart from that, the Bob e-bike has an IP67 certified LED display on the front which provides the rider with various stats such as the battery remaining, time, and more. It can be used to control the bike settings as well.

Ignitron Motocorp has priced the Cyborg Bob-e bike at an ex-showroom price of Rs 1,14,999.

Where to buy Cyborg Bob-e Bike

Reservations for the Cyborg Bob-e bike can be made on the company’s own website by depositing a booking fee of Rs 999 and filling up the necessary details. 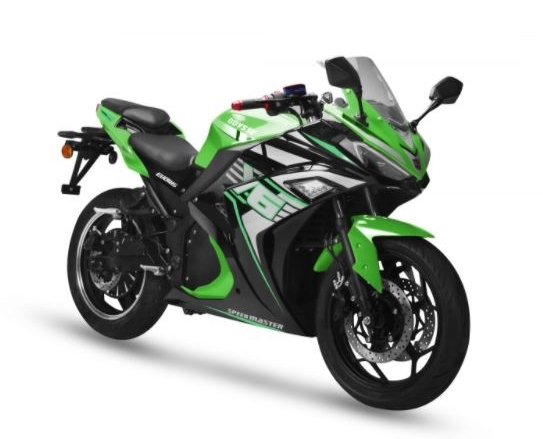 The Odysse Evoqis is a high-end sports bike that matches the design language of some of the most iconic petrol run bikes. Having top speeds of 80km/hr, the electric bike can glide through the city roads with ease. The Evoqis is Powered by a 4.32 KW lithium-ion battery that can provide a range of 100 km/h on a single charge. The battery takes 6 hours to fully charge with the 15W charger which comes along with the bike. The e-bike has a motor power of 3000 watts and also supports keyless ignition.

The Evoqis can be booked and bought through Odysse’s website by depositing a fee of Rs 2000. Accordingly, you can check the dealerships near you for a test ride of this high-end sports e-bike. 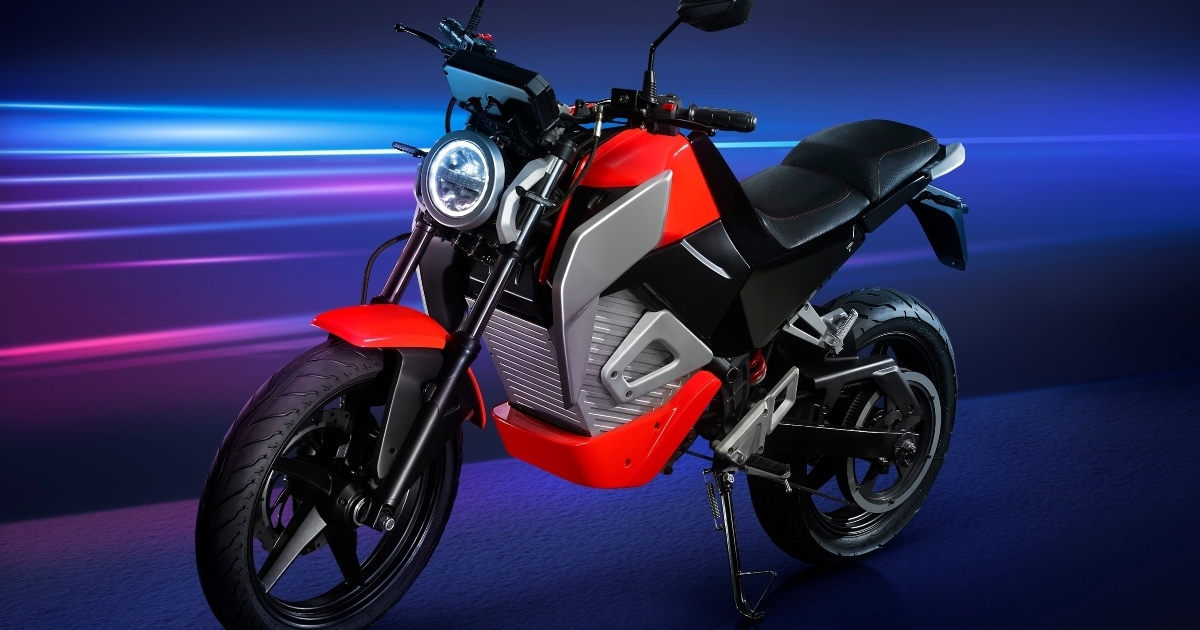 This electric bike from Bangalore based startup called Oben Electric is able to zoom its way at a top speed of 100km/hr. With an impressive range of 200 km on a full charge, the Oben Rorr is a perfect bike for city rides and short trips. The charging of the 4kWh lithium-ion battery pack is taken care of by a portable charger which can take the battery from flat to full in around 2 hours using a 15A power socket. Apart from that, the e-bike features a 6.5-inch display, which along with basic stats has a driver alert system that keeps the rider aware of its surroundings with visual indicators. Oben also has a dedicated mobile app to access tons of inbuilt features.

The Oben Rorr starts at an ex-showroom price of Rs 99,999 which includes all the state subsidies.

Where to buy Oben Rorr

The Oben Rorr is currently up for pre-booking on the company’s website. The pre-booking amount is set at Rs 999 and the claimed delivery date is July 2022 depending on the cities and availability.

You can turn Maruti Ignis into an electric car, here’s how