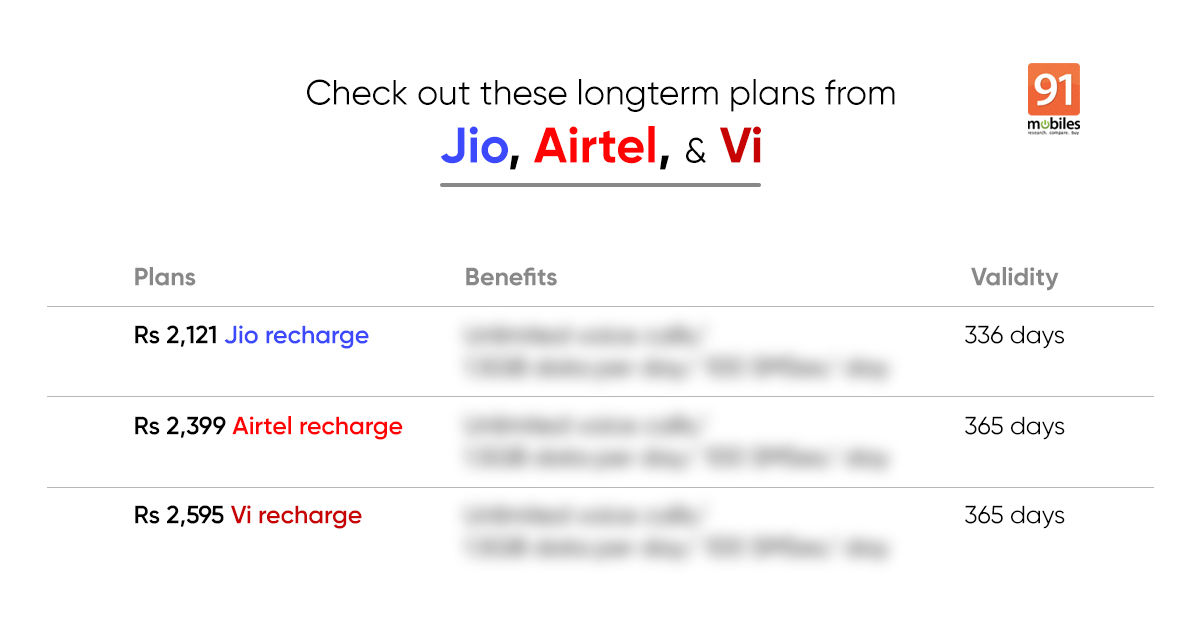 Jio offers four longterm recharge packs to its subscribers. Rs 2,121 is the entry-level longterm recharge pack from the telco. The pack for prepaid customers comes with a validity of 336 days and benefits such as free voice calls, 1.5GB data/ day, a quota of 100 SMSes a day, and subscription to Jio apps. Moving slightly up the ladder, you’ve Rs 2,399 Jio recharge plan that comes with 2GB data per day and a validity of 365 days. The rest of the benefits remain the same as the base Rs 2,121 pack. There are also Rs 2,599, which comes with Disney+ Hotstar VIP subscription atop the Rs 2,399 pack benefits, and Rs 4,999 Jio recharge plans. The latter is bundled with a total of 350GB data with no cap on the daily usage and 360 days validity.

Airtel has only two longterm recharge packs in its portfolio. These packs come with Rs 1,498 and Rs 2,498 denominations and include benefits such as up to 2GB data per day, 100 SMSes a day, unlimited voice calls, Prime Video Mobile edition free trial, and Rs 100 cashback on FASTag. Both Rs 1,498 and Rs 2,498 Airtel recharge packs have a validity of a year, i.e. 365 days.

Vi longterm recharge includes Rs 1,499, Rs 2,399, and Rs 2,595 packs. The benefits of these recharge packs remain pretty much the same. They all come with unlimited voice calls, a daily dose of 100 SMSes, and 365 days of validity. The only notable difference between the three longterm Vi recharge packs is the data benefit – the base Rs 1,499 Vi recharge pack is bundled with a total of 24GB data, while Rs 2,399 and Rs 2,595 packs offer 1.5GB data and 2GB data/ day respectively. Additionally, the Rs 2,595 Vi prepaid pack offers a free subscription to ZEE5 premium.

These are the best Airtel, Vi, and Jio’s yearly recharge packs that are available in India right now.
ShareTweetShare
Share

All Jio long-term validity recharges from Rs 999 to Rs 9,999 detailed