Home Entertainment Best sci-fi movies on OTT in 2023: Nope, Everything Everywhere All At... 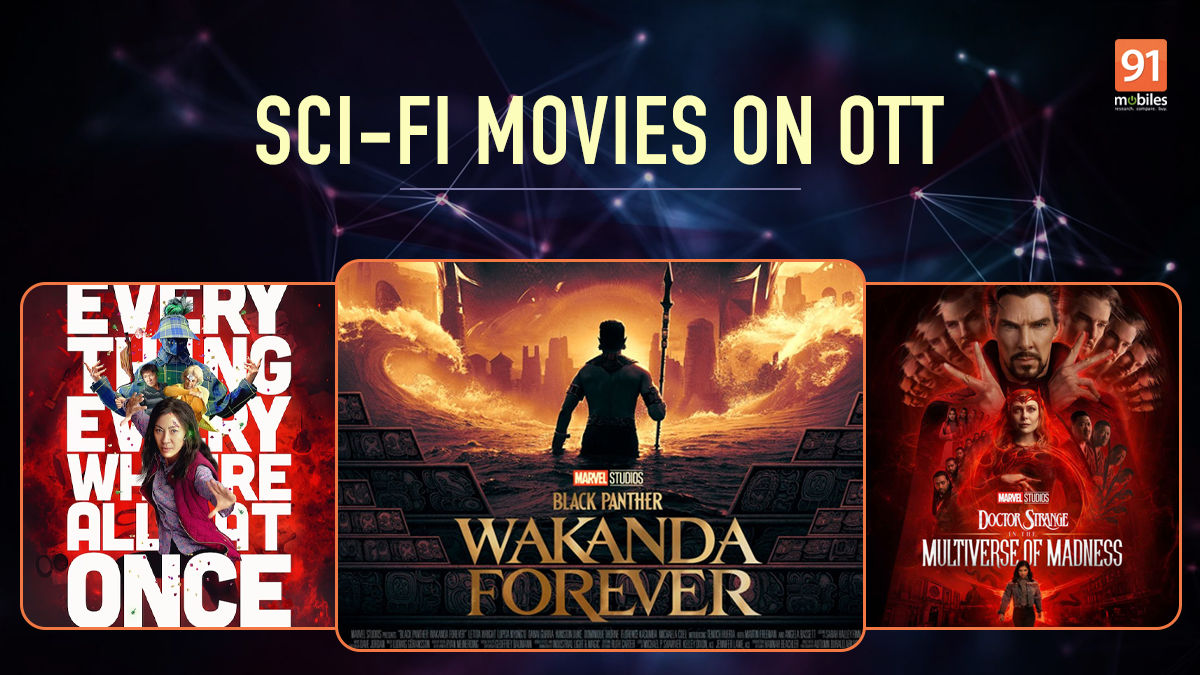 Science fiction is one of the most exciting genres in movies, given the creative liberty creators have in creating storylines in it. We have seen some amazing sci-fi films that offer sub-genres such as comedy, horror, action, and drama to give you, the reader, a wholesome experience while simultaneously blowing your mind. If you are looking for some of the best sci-fi movies on OTT to watch online in India right now, we have done all the hard work and curated a list of the ones we loved most, with their trailers and streaming platform information to help you get right into it. Here is the list.

List of best sci-fi movies on OTT in 2023: IMDb rating and where to watch

Nope or NOPE is famed director Jordan Peele’s latest sci-fi horror directorial. Released in July 2022, NOPE has been one of the highest-grossing movies of the last year, with acclaim showered upon its direction, acting, storyline, and music. You have superb actors like Daniel Kaluuya, Keke Palmer, and Steven Yeun in lead roles, and the film’s score was composed by Michael Abels. NOPE is an R-rated Hollywood film that revolves around a family dealing with the death of their father due to an Unidentified Flying Object in the skies.

Where to watch NOPE

NOPE is now streaming on Amazon Prime Video in India.

While Indian cinema isn’t known much for its sci-fi content, Netflix is looking to change that with this Hindi sci-fi thriller that casts Taapsee Pannu and Tahir Raj Bhasin in lead roles. An official adaptation of the award-winning German film Run Lola Run, Looop Lapeta shows the story of Savi who must save her boyfriend’s life from a mobster who has set deadlines to get back his money. Savi must go through several dead ends to make this impossible task possible.

Where to Looop Lapeta

Looop Lapeta is streaming on Netflix in India. It is an original Netflix India production.

Lightyear is one of the best-animated sci-fi films of the year. This action-adventure revolves around the life of Buzz Lightyear, the Toy Story character, as he tries to find his way back home after being abandoned on a hostile planet, with his commander and crew alongside him. Nostalgia fans from the early 2000s will absolutely adore this character who is back on the screen with his charming personality and adventurous abilities.

Where to watch Lightyear

Lightyear is streaming on Disney Plus Hotstar in India.

4. Everything Everywhere All At Once

Probably one of the best films of 2022, Everything Everywhere All At Once is absurdist, sci-fi, and comedy-drama, all packed into one! The plot revolves around a Chinese American who connects with versions of herself from parallel universes and must take control to protect the multiverse from evil beings. As per several critics, the film is a combination of surreal comedy, martial arts, animation, science fiction, and so much more. Definitely some of the most enjoyable 139 minutes you will experience.

Where to watch Everything Everywhere All At Once

Everything Everywhere All At Once is now streaming on BookMyShow Stream in India.

Latest in the superhit Predator franchise, Prey is actually a prequel to the first four films and is set way back in 1719. It is the story of a Comanche warrior who must convince her tribe that she is capable enough to protect them, by taking on a humanoid alien. She must also take on a different kind of enemy, fur traders who hunt the buffalo that the tribe relies on for their survival. Released in July last year, Prey is considered by some as the best Predator film of all time.

Where to watch Prey

Prey is now streaming on Disney Plus Hotstar in India.

Ryan Reynolds is back in this sci-fi comedy flick that shows the time travel story of a fighter pilot from the future who comes back to meet and help his younger self. The cast also includes names such as Mark Ruffalo, Jennifer Garner, Catherine Keener, and Zoe Saldana. With mixed reviews, The Adam Project has not disappointed Netflix reviews with millions of users streaming the movie in the first few days of its digital release. Shawn Levy, director of the Night at the Museum franchise, is the mind behind this fun watch.

Where to watch The Adam Project

The Adam Project is streaming on Netflix in India.

Thor: Love and Thunder is the fourth Thor film and the sequel to the hugely popular Thor: Ragnarok from 2017. And, with Taika Waititi in the driver’s seat, the movie has lived up to the expectations of audience and critics alike. Thor is back with its confidants Valkyrie, Korg, and Jane Foster, to take on Gorr the God Butcher from eliminating gods across universes. Obviously, with Waititi, you get a superb superhero film with elements of subtle comedy that make this a wholesome watch.

Where to watch Thor: Love and Thunder

Thor: Love and Thunder is streaming on Disney Plus Hotstar in India.

Sequel to 2018’s Jurassic World: Fallen Kingdom, Dominion is the third and final instalment in the sci-fi action movie series. With Chris Pratt in the lead, this flick is a super watch if CGI dinosaurs and edge-of-the-seat action are your interests. Audiences across the globe loved this film which has become the fourth film in its franchise to gross over $1 billion at the box office. Colin Trevorrow is the directorial mind behind this project.

Where to watch Jurassic World: Dominion

9. Doctor Strange in the Multiverse of Madness

Doctor Strange in the Multiverse of Madness is the 28th film in the Marvel Cinematic Universe (MCU), which brings back Benedict Cumberbatch as Doctor Stephen Strange who must protect a teenager from the Scarlet Witch aka Wanda Maximoff. The movie continues right after the Disney series Wandavision, as the MCU character goes into rage mode to help continue her ideal life. Apart from that, you also get to see Wong as the new Sorcerer Supreme as he takes on new challenges from the universe.

Where to watch Doctor Strange in the Multiverse of Madness

Doctor Strange in the Multiverse of Madness is streaming online on Disney Plus Hotstar in India.

Wakanda Forever is the sequel to the superhit, Oscar-nominated MCU movie, Black Panther. The 30th movie in the franchise, this superhero film brings back Letitia Wright, Lupita Nyong’o, and Danai Gurira as Wakanda fights to protect its kingdom after leader T’Challa’s death. The movie made a ton of money at the box office, becoming the 6th highest-grosser of 2022.

Other sci-fi movies worth watching

Here are some other sci-fi movies you can watch online as and when they are available on OTT in India:

Neptune Frost is a one-of-its-kind sci-fi romantic comedy flick that shows the unique love story of two coltan miners, Neptune and Matalusa. One of the few known works of “Afrofuturism”, Neptune Frost is set in Burundi and is powered by a solid soundtrack that transcends across cultures to give you a magical experience while you experience the technological advancements that take place through the entire 105 minutes of this fun watch.

Avatar: The Way of Water

Avatar: The Way of Water is the much-anticipated sequel to one of the highest-grossing movies of all time, Avatar. With the same amazing lead cast as the first film from 12 years ago, The Way of Water carries forward the story of Jake as he blends in with the Na’vi, having four kids with his wife, Neytiri. But with the humans not done yet, it is time for another adventure this time around. Much like the last time, this movie too has a superbly long runtime of 192 minutes; however, director James Cameron is an expert on keeping audiences hooked to the screen with his storyline and visuals.

After Yang is a quintessential sci-fi drama that shows the story of a robotic child in a family that tries to revive their unresponsive offspring. This movie is one of the most underrated sci-fi flicks of 2022, with poor box office performance albeit great reviews by critics – 89 percent of critic reviews on Rotten Tomatoes are positive. Colin Farrell and Jodie-Turner Smith star in this interesting watch.

Beavis and Butt-Head Do the Universe

Beavis and Butt-Head Do the Universe is one of the most fun adult animated watches of last year. Marking the comeback of the Beavis and Butt-Head franchise after a 26-year-long wait, this film is actually about the two lead characters getting transported from 1998 to 2022, as they meet their parallel universe versions and work together to take on the might of the external forces. If animated movies are your thing, this Mike Judge masterpiece should be on your binge list this week.