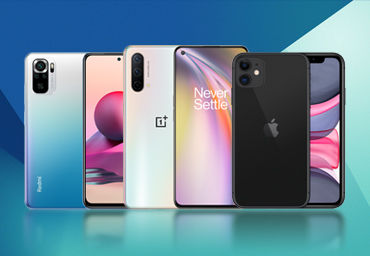 Amazon India is back with the Prime Day 2021 sale, which gives you a great chance to get mind-blowing deals and never-seen-before discounts on your favourite smartphones. While we don’t know the exact discounts yet, Amazon has teased us with a tsunami of deals that buyers should be on the lookout for. Brands like Xiaomi, OnePlus, Samsung, and even Apple are giving away their latest phones with attractive discounts and freebies. You are also getting exchange offers and no-cost EMIs that lasts up to 12 months which makes it appealing for all buyers looking to upgrade from their current smartphone. So, what are you waiting for! Here are the best smartphone deals coming to you on Amazon Prime Day sales this week.

OnePlus smartphones like OnePlus Nord CE 5G that is currently selling at Rs 24,999, will see some heavy discounts on Amazon Prime Day. Not only that, both the OnePlus 9 and the OnePlus 9R will also see some steep discounts. While we don’t have the exact figures right now, we know that the Amazon Prime Day sale of OnePlus smartphones will get discounts up to Rs 4,000 with coupons. You can also get up to Rs 5,000 extra off if you exchange it with your current smartphone. You also have the option to avail of no-cost EMI offers for up to nine months for these models.

The Amazon Prime Day deals are not just for OnePlus fanboys. Amazon is also offering some lucrative deals on popular Xiaomi smartphones. You can get the Redmi Note 10S with a 64MP Quad camera and a Super AMOLED display at a good discount. The popular Redmi Note 10 Pro Max with a 108MP Quad camera and 120Hz Super AMOLED display will see at least Rs 2,000 discount, and the budget Redmi 9 smartphone with a 5,000mAh battery will also be available below Rs 8,999. Amazon is also offering additional deals for Xiaomi buyers on Prime Day. You will get an exchange discount of up to Rs 3,000, free screen replacement on select models, and up to 12 months of no-cost EMIs.

Samsung has planned special discounts of up to Rs 10,000 on its Galaxy M Series with coupons. Because of this, you have a great chance of owning the Samsung Galaxy M31s with Super AMOLED screen and 6,000mAh battery for under Rs 20,000, as against its original price of Rs 22,999. If you want more discounts, then go for the Samsung Galaxy M51, which will also sell below Rs 20,000 on Prime Day. You will also get six months of free screen replacement and up to nine months of no-cost EMI. For those holding out for great deals on Samsung phones, this is the best time to make your move!

iQOO has great deals lined up for its iQOO Z3 5G and iQOO 7 Legend smartphones during the Amazon Prime Day event. You can get the mid-range Z3 smartphone below Rs 20,000. iQOO 7 Legend with Snapdragon 888 chipset will be available during Amazon Prime Day with steep discounts. Although we don’t have the exact figures, expect anywhere between Rs 3,000 and Rs 5,000 off, if not more. You can also save up to Rs 2,000 using coupons and a chance to avail yourself of attractive no-cost EMI along with free screen replacement offers. 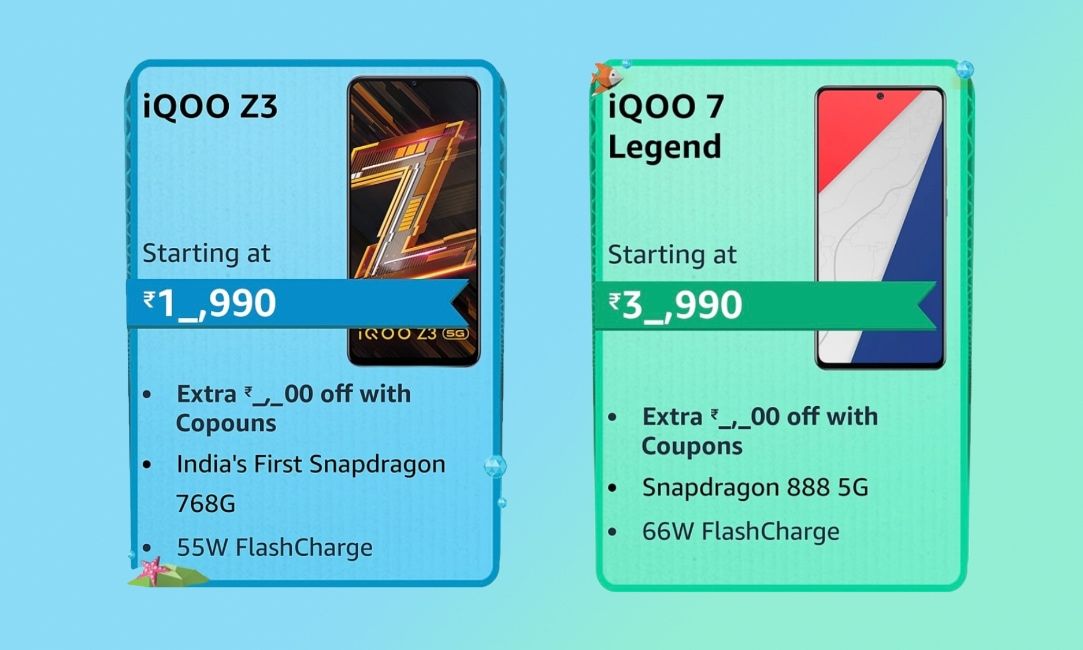 No smartphone deal festival is complete with juicy offers on Apple iPhones. And with the latest Amazon Prime Day smartphone deals, you have the best chance to own the popular iPhone 11 for well under Rs 50,000. And the more premium iPhone 12 Pro, which has a starting price of Rs 1,19,900, will also see some unbelievable discounts.

Other smartphone deals to look out for

Amazon Prime Day will offer up to 12 months of no-cost EMI on select smartphones that will make buying phones highly affordable with easy payment tenures. You also get offers of up to Rs 3,000 off with coupons and additional Rs 5000 off on smartphones via exchange deals. HDFC Bank card users will get six months of free screen replacement and additional three months of no-cost EMI tenure.

You will also get a 10 percent instant discount when you pay using HDFC Bank debit and credit cards. Prime members also get 5 percent reward points on unlimited Prime Day purchases with the Amazon Pay ICICI Bank Credit Card. As you can see, Amazon is raining deals for its Prime Day event. If you were holding out for a new smartphone, get ready to buy it. The Amazon Prime Day event will go live on July 26th and will run for 48 hours. Also, don’t forget to get the Prime membership to avail all these discounts.

Also Read: Amazon Prime Day is here and it’s the best time to get your Prime membership

10 best-selling smartphones you can buy on Amazon Prime Day

Best gadgets under Rs 10,000 you can buy in the Amazon Prime Day sale