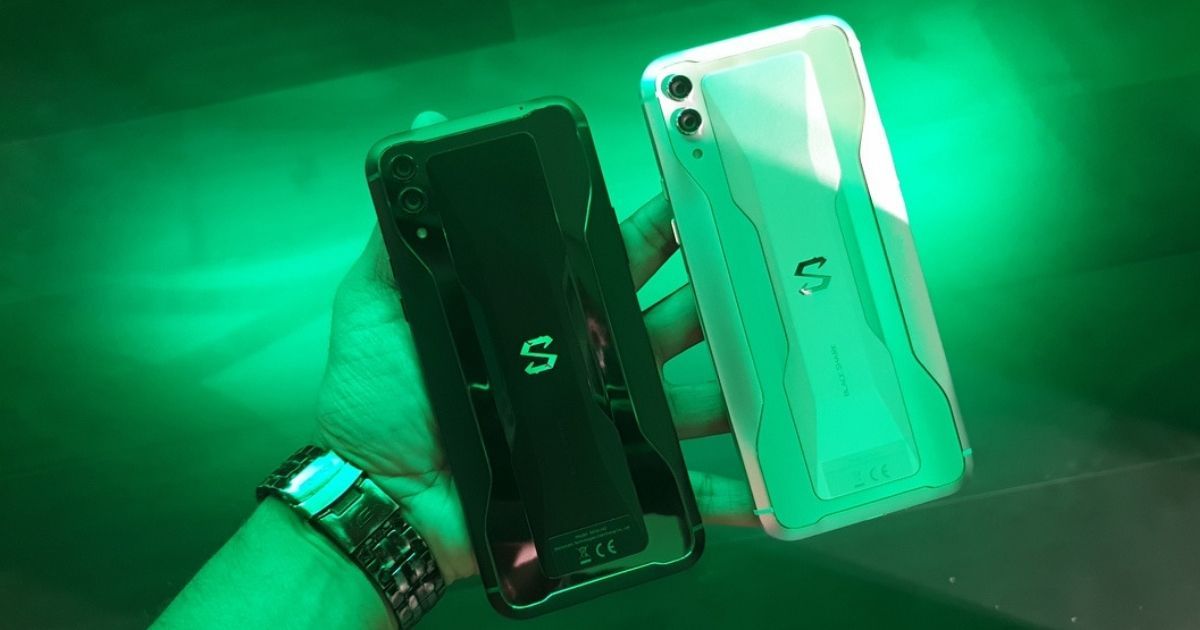 After what feels like ages, Xiaomi-backed gaming smartphone brand – Black Shark has finally launched its latest Black Shark 2 in India today. The smartphone comes in as a competitor to the ASUS ROG Phone (review) and completely blows the ASUS offering out of the water. For starters, the Black Shark 2 is the only gaming smartphone in India at the moment rocking the mightiest Qualcomm Snapdragon 855  SoC and up to 12GB RAM. We got our hands on the new smartphone at the launch event today and here’s how we feel about it. 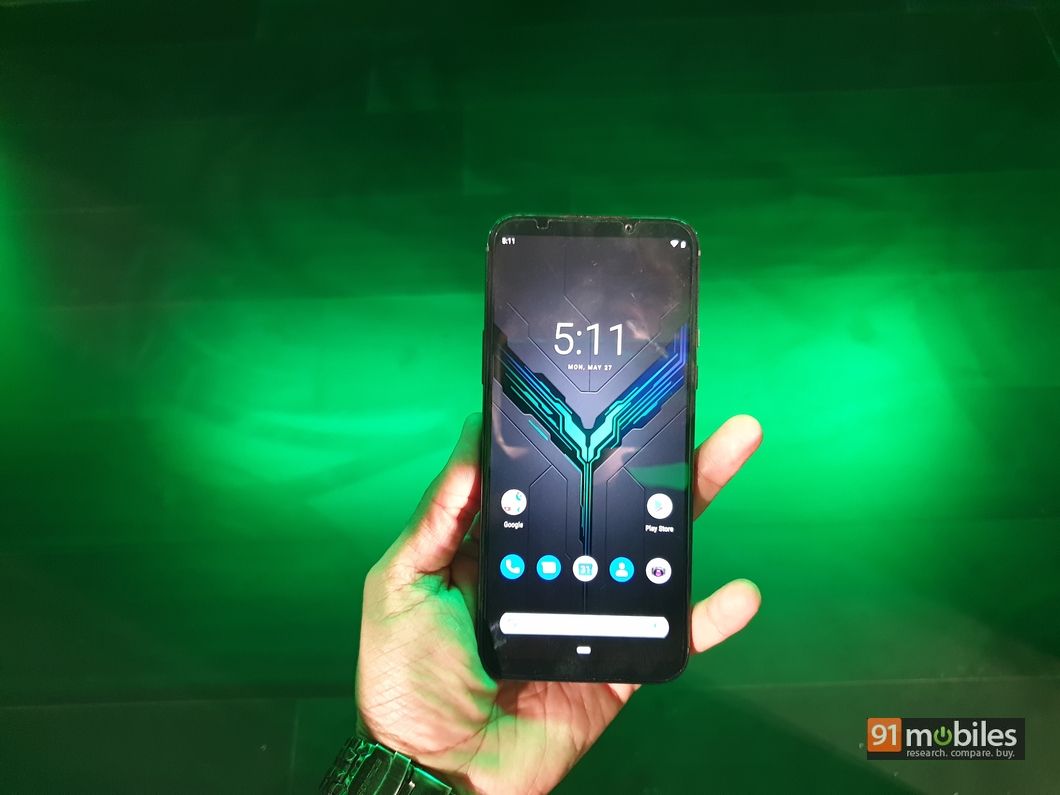 With the Black Shark 2, the company has retained all the gaming glamour without going too overboard. The latest launch builds upon the design of the first-generation Black Shark and takes it to the next level. The smartphone comes with a hybrid glass sandwich design, which has a metal strip in the centre of the rear panel housing the pulsating RGB Black Shark logo. The metal strip is surrounded by a glass sheet, which then extends to metal again on the sides. You will find the dual cameras in the top left corner and a neon green strip running all along the edges of the glass sheet. Black Shark has also upgraded the design of the X-type Smart Antenna from the first generation Black Shark and the new launch also has two additional antennas on the sides. You can stop worrying about network drops during live streaming gameplay now. Speaking of live streaming, the Black Shark 2 gets a dedicated Live Streaming Mode along with Handheld Mode and Host Mode. 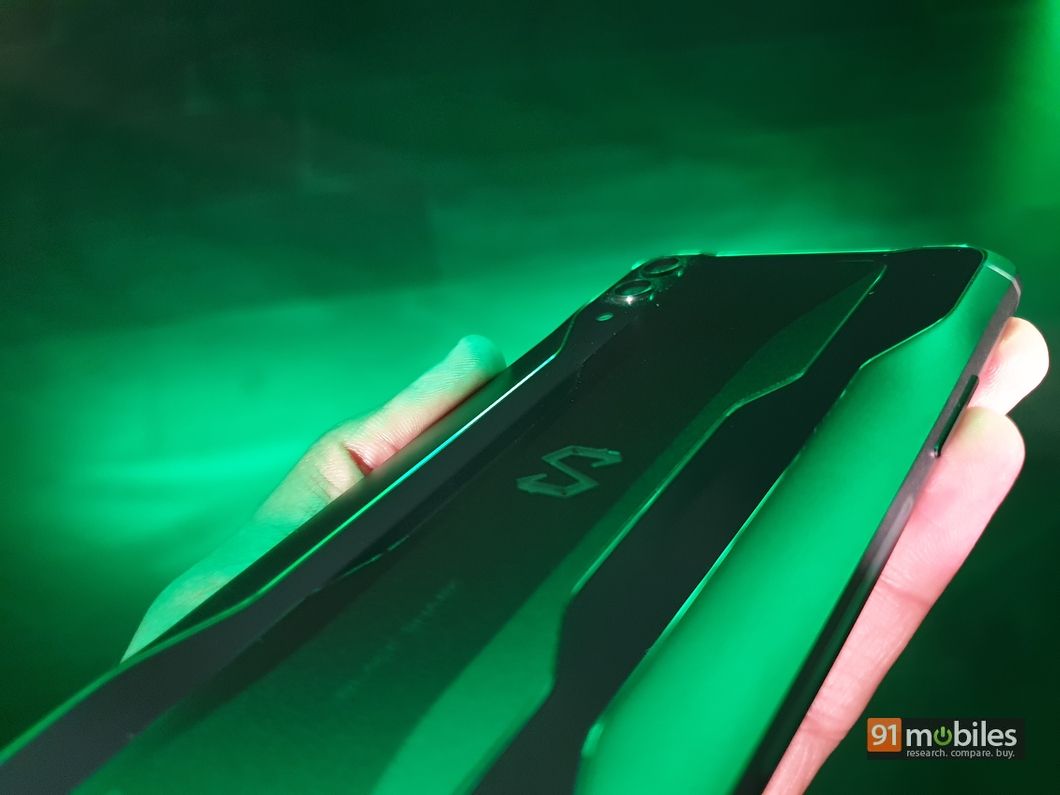 Moving on to the sides, the company has kept things minimal, as you get volume buttons on the left and a power button with Shark Key on the right. The latter triggers the gaming focussed mode, which boosts the maximum performance to deliver the best gaming experience. The top of the smartphone is barebones, whereas on the bottom you will find the USB Type-C port and SIM slot. The company has added two more interesting details on the sides, which gives the Black Shark 2 a gaming look. The same neon green strip from the rear panel runs along the whole length on the side, which is again subtle but unique. Fans of RGB lighting will love the short and slim RGB strips on both sides, which pulsate for notification and music playback. Black Shark claims that the LED strips can produce over 16.8 million colours and are designed to sync intelligently with in-game effects and more.

The display is a no-notch affair and has slim bezels on the top and the bottom. Black Shark asserts that the bezels are there to provide better grip and prevent accidental touches during gameplay, which serious gamers will certainly appreciate. The display itself is a 6.39-inch AMOLED TrueView panel with an aspect ratio of 19.5:9. Other features include 430nit brightness, 108.9 percent DCI P3 colour gamut, a contrast ratio of 60,000:1, 60Hz refresh rate and Magic Press pressure-sensitive tech. The latter allows users to customise pressure sensitivity on the screen, to further enhance the control during the gameplay. The Black Shark 2 also has  43.5ms latency, which is the lowest so far on a touchscreen smartphone and is supposed to greatly improve the touch input. 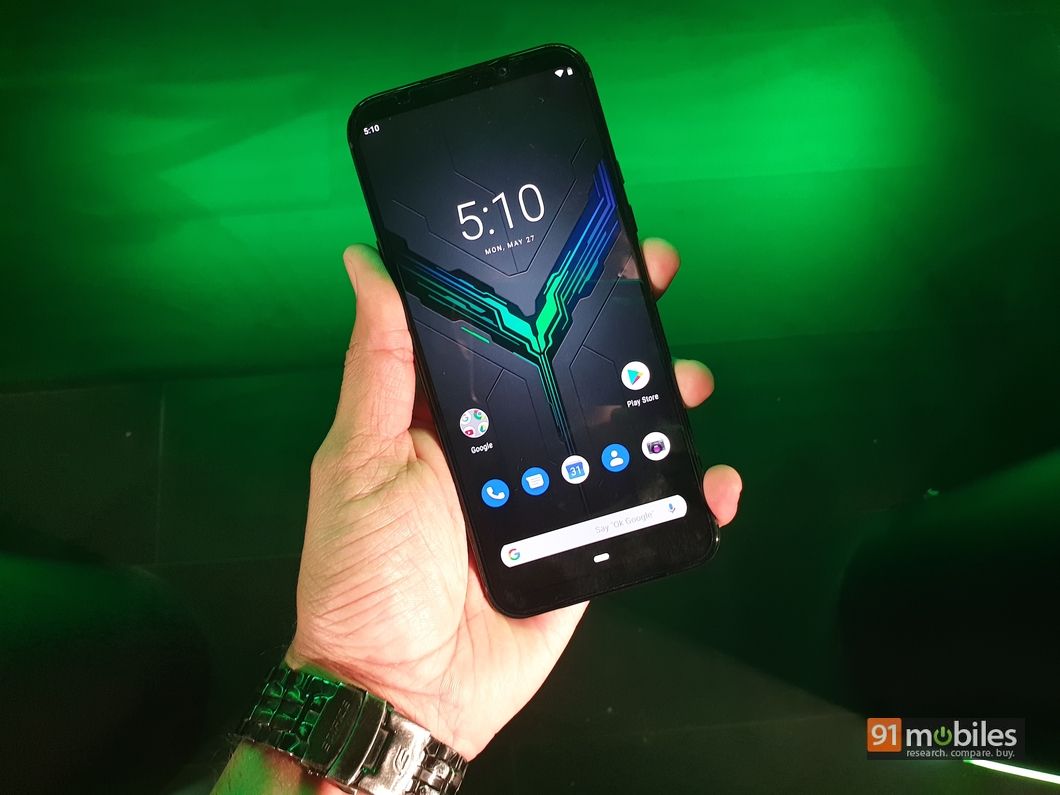 There’s also ‘DC dimming technology’, which reduces the flicker effect of the adaptive brightness and automatically adjusts the display effect to the outside ambience. The 60Hz refresh rate might sound a little underwhelming to many since the OnePlus 7 Pro sports a higher screen refresh rate of 90Hz. However, Black Shark 2 claims that the panel supports a display touch sampling rate of 240Hz for a smoother gaming experience. Technology jargon aside, we couldn’t fault the brightness, viewing angles, sharpness and colour reproduction on the Black Shark 2. For gaming, the display offers True HDR gaming, which takes the in-game visuals to the next level. While there are not many HDR-enabled games on Android as of now, we can expect developers of major gaming titles to jump onto the bandwagon soon. 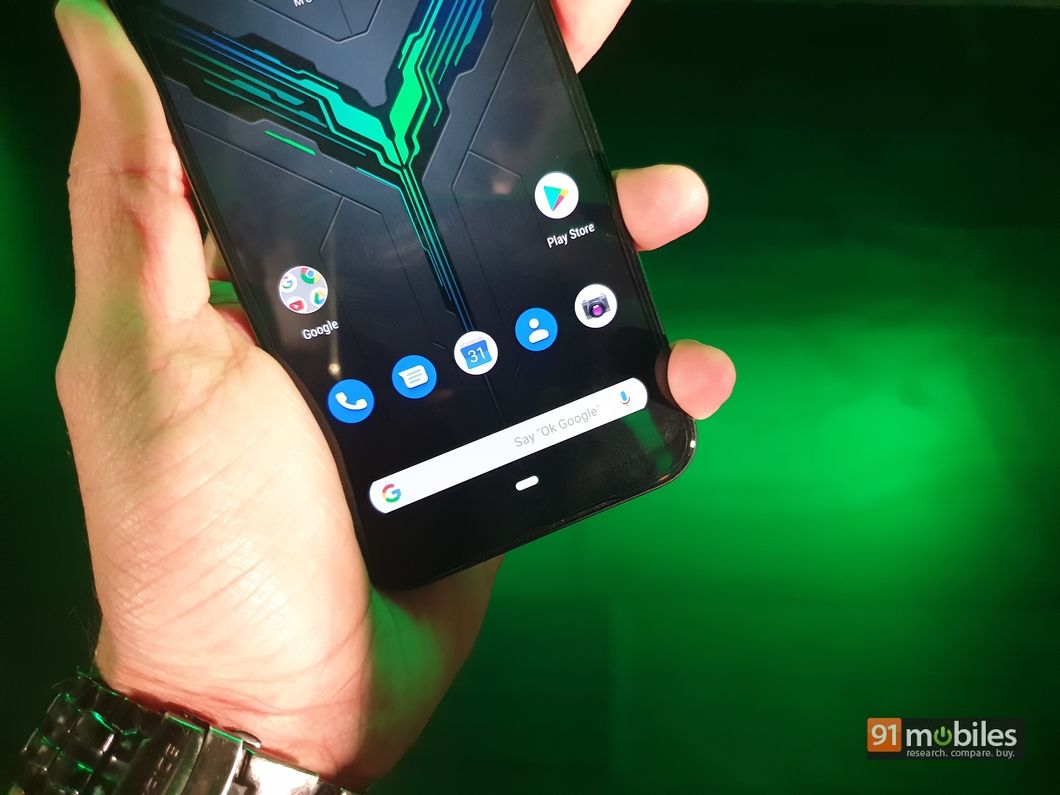 Speaking of the gaming performance, the Black Shark 2 is equipped with the latest 7nm Snapdragon 855 SoC, which makes it the most powerful smartphone in India right now. The company is offering the phone in India in two configurations – 6GB + 128GB and 12GB + 256GB, with no support for expandable storage. However, the 128GB and 256GB options should be enough for your storage requirements and the UFS 2.1 standard ensures speedy transfer of data as well. The chipset is backed by features like Snapdragon Elite Gaming tech, Physically Based Rendering and Liquid Cooling 3.0 technology for enhanced gaming performance. Speaking of which, there is also a Ludicrous mode, which unleashes all of Black Shark 2’s CPU prowess to handle gaming. Needless to say, whatever we threw at the Black Shark 2 during our short stint, it handled it without even breaking a sweat.

On the software front, the Black Shark 2 boots Android 9.0 Pie-based Black Shark OS out of the box, which is loaded to the gills with a smorgasbord of gaming features. In the battery department, the handset flaunts a 4,000mAh battery with Qualcomm’s Quick Charge 4.0 fast charging support. For security, the brand has integrated an optical fingerprint scanner into the display. 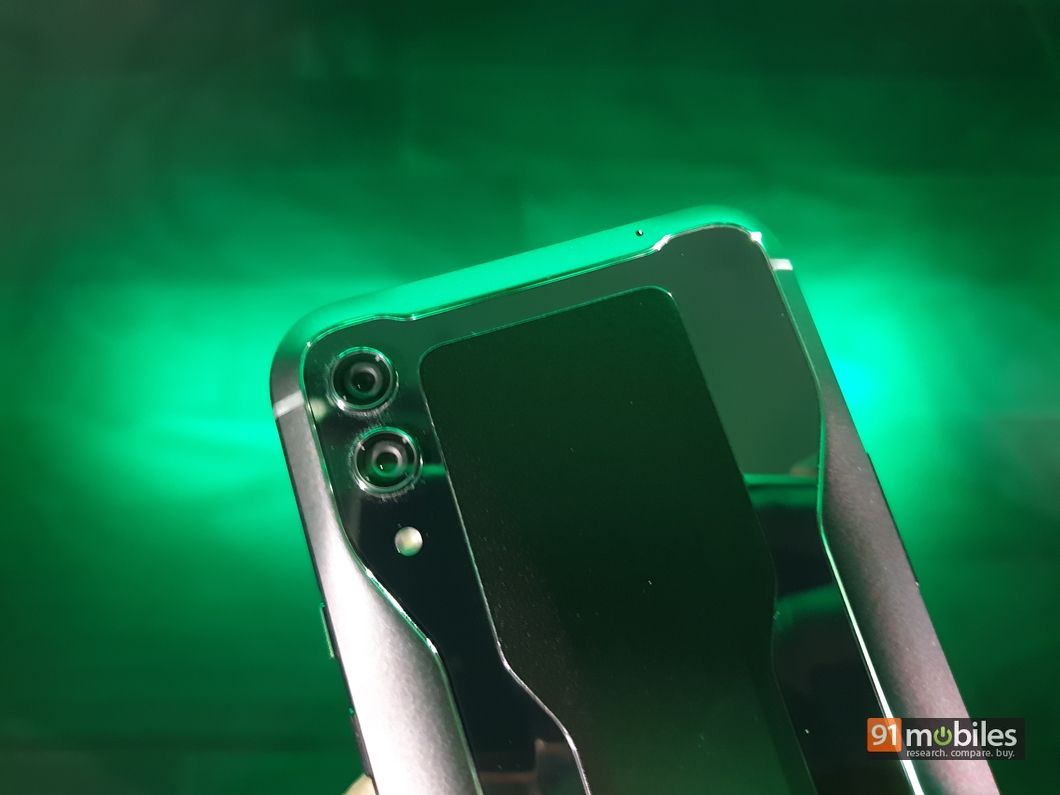 While it would be a bit extreme to expect class-leading cameras on a gaming smartphone, the Black Shark 2 doesn’t disappoint. The smartphone flaunts a dual camera module on the back comprising a 48MP primary sensor with f/1.75 aperture and 12MP 2x telephoto sensor with f/2.2 aperture. On the front, the smartphone flaunts a 20MP sensor with f/2.0 aperture and five-element lens. The camera app interface is pretty standard and pictures taken in daylight appear good. For a gaming smartphone, the Black Shark 2 surely offers more than you bargained for in the camera department.

Black Shark definitely seems to have a winner on its hands with the Black Shark 2, especially as far as the mobile gamers are concerned. From loaded internals, dedicated gaming-intensive features to a powerful camera, the Black Shark 2 ticks all the right boxes. Currently, the Black Shark 2 looks completely loaded, all thanks to the latest Snapdragon flagship chipset and the 48MP camera. However, the likes of the Vivo IQOO and nubia Red Magic 3 are set to launch in India next month and can post some serious threat to the Black Shark offering.