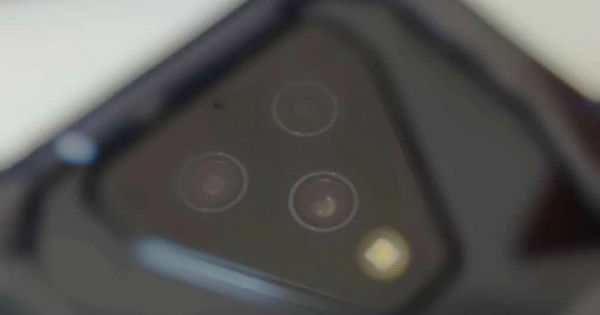 Black Shark 3 is scheduled to launch on March 3rd and is already confirmed to come with Snapdragon 865 SoC and 5G connectivity. The gaming phone was recently spotted on the AnTuTu benchmark with the highest score yet on the platform. Now, a new drawing of the Black Shark 3 surfaced online alongside a blurred live image, offering a closer look at the rear design and particularly the symmetrically aligned triple camera setup. This matches the design shown off in the teaser videos posted by Xiaomi CEO Lei Jun. While details regarding its sensors are unknown at the moment, it could have a 64MP primary sensor, an ultra-wide-angle lens and a telephoto or depth sensor.

#Xiaomi #blackshark3 #blackshark3pro
This is what the new gaming smartphone will look like. The render of the back to visually show a symmetrical design and a new triple camera. Although the most important thing in such a gaming phone is of course the cooling system.

The Xiaomi Black Shark 3 would come in two models- a standard version and a Pro variant. While the former will have a 4,720mAh battery, the latter could have a 5,000mAh unit, respectively. Both are expected to come with a 65W fast-charging support, up to 16GB LPDDR5 RAM, Quad HD+ display with 120Hz refresh rate, a 3.5mm audio jack UFS 3.1 storage and a Type-C port. The Black Shark 3 could come with liquid-cooling tech, RGB gaming lights, and magnetic charging attachment.

Connectivity features could include 5G, 4G LTE, dual-band Wi-Fi, Bluetooth 5.0, and A-GPS with GLONASS. There will be an in-display fingerprint sensor for security. Since the launch is just a day away, we don’t have to wait for much longer to know more about the Xiaomi gaming flagship. The handset should also find its way to India soon after its China unveiling.