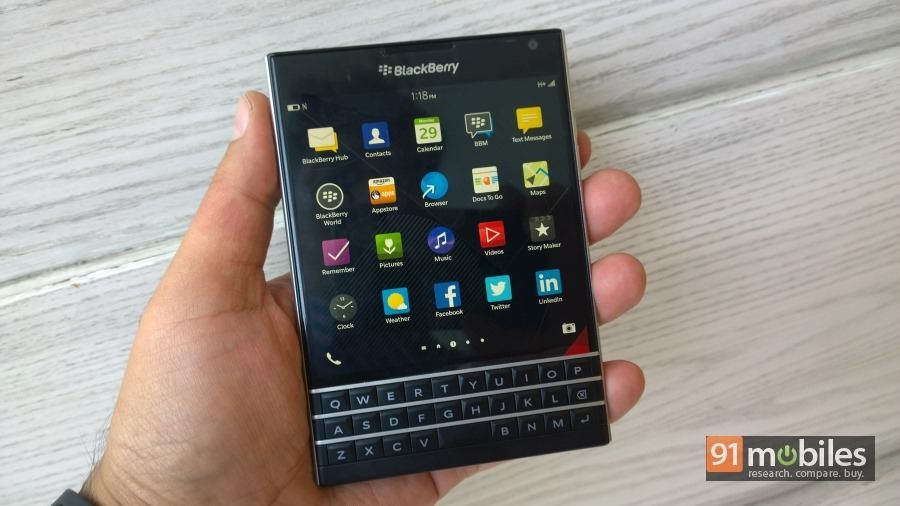 “The BlackBerry Passport may look like the odd one out in a sea of smartphones, but that’s exactly its calling card”

If you think the new BlackBerry Passport looks rather odd, you aren’t the only one. Its dimensions of 128 x 90mm make it a rather wide-bodied device, and at 9.3mm, it’s hardly anorexic either. It does tote a display which is completely square though, and BlackBerry says it’s ideal for getting work done on the move. BlackBerry says the 4.5-inch square display provides as much area as a regular 5-inch smartphone, and that the Passport has been designed from the ground up for business professionals looking to make the most of their time away from their work laptops and PCs. 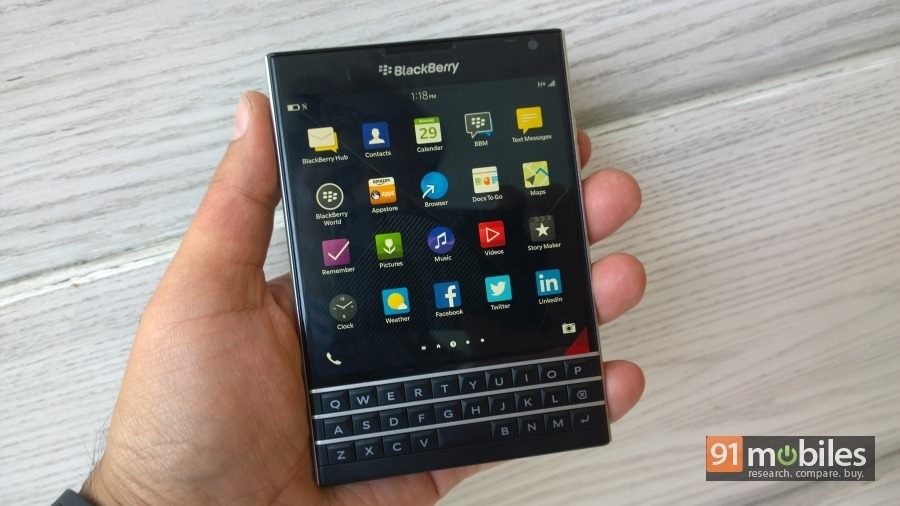 Maybe we’re getting ahead of ourselves here, and anyway, we’ll be putting the company’s claims to the test when we review the device properly. We did get to play with it for a little while at the launch event, and here are our first impressions.

That unconventional form factor is obviously the first thing that catches attention when one sees it for the first time. Various questions regarding the usability aspect, and how easy it’d be to carry around in the pocket swarm our minds as we got our eager hands on it… but again, it’d probably be too early to comment on that. 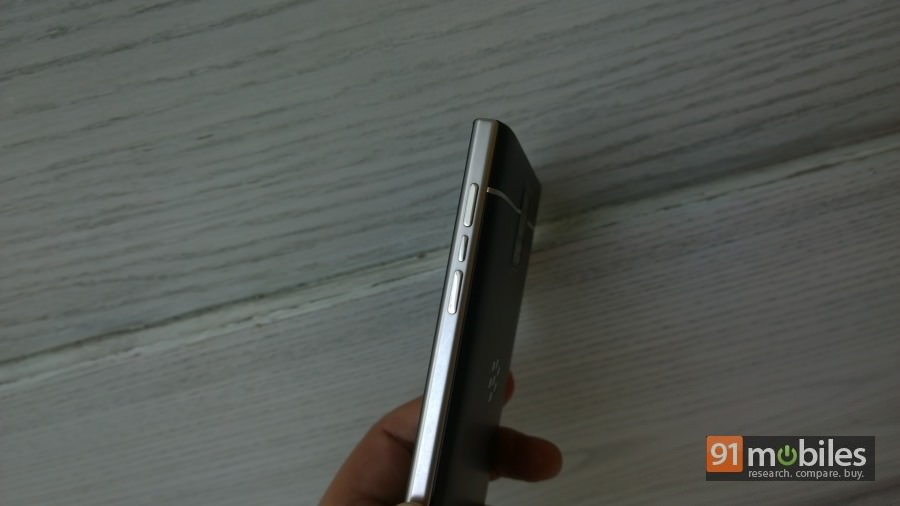 The build quality is typical BlackBerry – bomb proof. Encased in a sealed body, the Passport features a forged stainless steel frame that goes through a five-step CNC process. This frame is visible on the sides and doubles up as an RF antenna, while the rest of the body is fashioned out of high-quality plastics (in black or white). The device feels uber premium, with nary a creak to disturb our view about its build.

The front sports the 4.5-inch square display that’s layered with Corning Gorilla Glass 3… and if the corporate environment is a jungle these days then you can rest assured that even gorillas shouldn’t be able to scratch it. A three-row physical QWERTY keypad rests below the screen, while on top, you’ll find BlackBerry branding, an earpiece, sensors, front camera and notification LED. 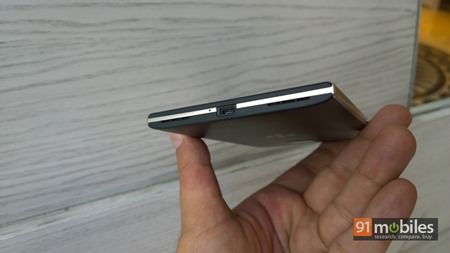 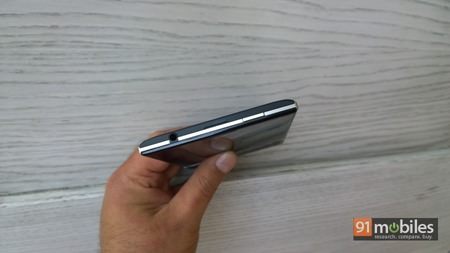 The top is home to the audio socket and the power key, while the bottom is where the micro-USB port is located, along with a pair of speakers. The left spine has been left barren, but the right holds the two separate volume keys with a voice command key placed in their midst. 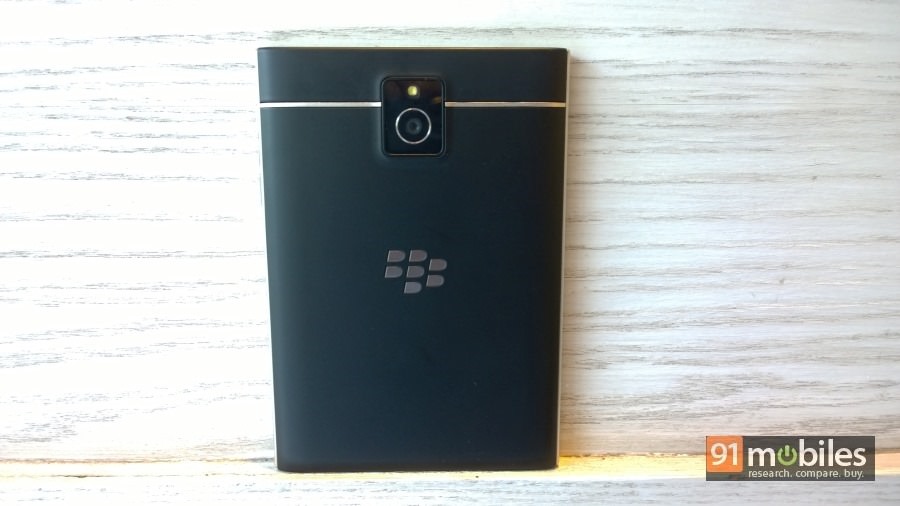 Turn the device around and you’ll see a large BlackBerry flying Ds logo bang in the middle. A chrome accent runs across near the top, with the camera module placed in its centre. This is a 13-megapixel unit loaded with optical image stabilisation and capable of recording full HD video at 60 fps. An LED flash is placed right above the circular lens window, with the latter encircled with a chrome ring. 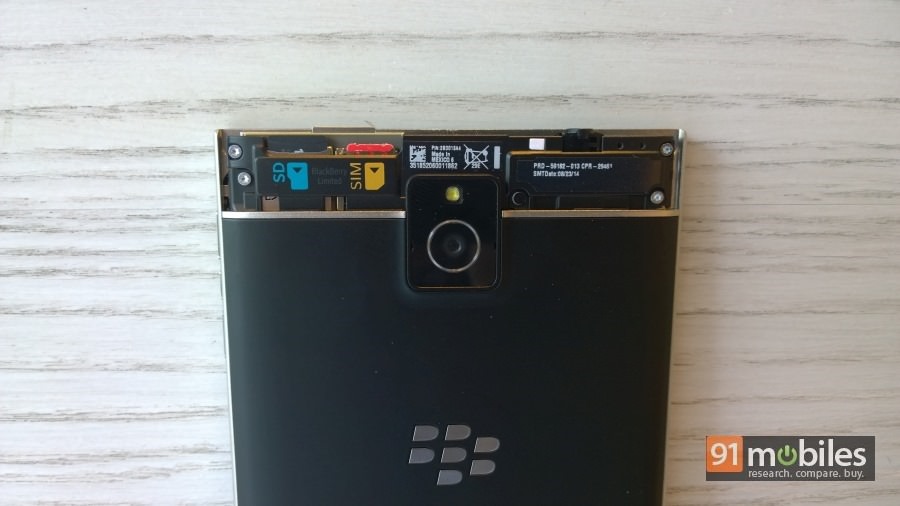 The back cover isn’t removable, but the portion above the aforementioned chrome accent comes off to reveal a microSD card slot and a slot that gobbles up a nano-SIM. This is the first smartphone from the brand that takes in a nano-SIM, and after the Sony Xperia Z3 we just reviewed, leaves us wondering whether the smallest SIM variety is fast on its way to becoming a standard… at least among premium flagships.

When it comes to software, the Passport runs BB OS 10.3, which is the very latest build of BlackBerry’s mobile platform. This version should roll out to at least some of the existing BB OS smartphones eventually, but the brand hasn’t specified the exact date or the models that’ll be receiving it. The Passport then, is currently the only device running OS 10.3 for now, and the new iteration brings with some interesting and useful features. All the standard features of the OS are all there of course, including BlackBerry Hub (with Priority Hub), Active Frames, baked in support for Facebook, Twitter and LinkedIn, pop-up notifications with some apps supporting inline replies etc. However, the new features include stuff like the preloaded Amazon Appstore that lets one download and install Android apps directly, along with BlackBerry Blend, a new feature that lets users share content from their Passports to other devices, including PCs, Macs and even tablets running Android or iOS. Again, this is something we’ll need to try out properly later, but it does sound quite useful.

BlackBerry Assistant, the brand’s rather straightforwardly-named voice-based assistant makes its debut on BB OS 10.3 too, and lets you use some tasks using speech. So you could have ‘her’ read your last BBM message and reply to it by voice, or set up a lunch meeting with a contact. 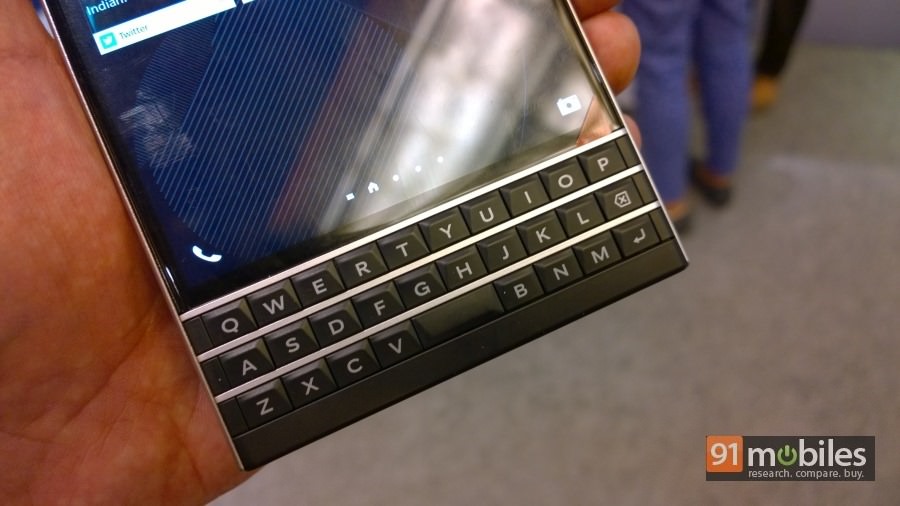 One of the most interesting features offered by the Passport is the touch input via its QWERTY keyboard, and we were quite intrigued by how that works. Turned out, it was quite intuitive and simple to use, apart from looking like a very handy addition. The keyboard recognises swipes, so instead of pressing the keys, light swipes across its length and width do the job. If you haven’t done so yet, do take a look at the video embedded in this post to see it for your own eyes. Basically, when you’re in any text input window (like a message compose screen for example), three word suggestions will appear on a bar at the bottom of the screen. The keyboard is divided into three touch zones, so depending upon which word suggestion is the most appropriate, you can just swipe up on the keyboard on the corresponding location. For example, if the leftmost word suggestion is the one you want to enter, just flick up using your finger on the left side of the keyboard, and voila, the word flies into the text field. Once the device learns your typing habits, the word suggestions should improve over time, theoretically letting you input a bulk of the text by flicking up – very similar to the way it works on the all-touch BB 10 devices like the Z10, Z30 and the Z3 (review). Swiping left anywhere on the keyboard deletes the last word you typed – it’s that simple. 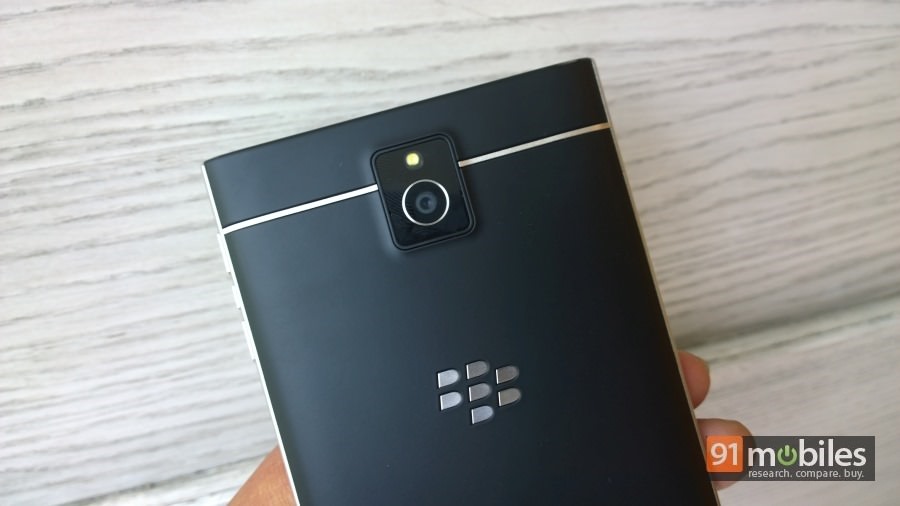 BB OS 10 isn’t a very resource hungry platform and we’ve seen it work fluidly on devices like the Z30 before. The Passport comes loaded with top-end specs like a 2.2GHz quad-core Snapdragon 801 chip and 3 gigs of RAM, so it’s no surprise that we didn’t encounter any signs of lag during our brief hands-on period with the device. 32GB of internal storage is generous too, while the microSD card slot with support for another 128GB should suffice for storing all your documents and music. Do note that we aren’t mentioning movies here, since that square screen may not be the best when it comes to viewing widescreen videos. The 13-megapixel OIS-toting shooter is also something we want to try out as soon as the authorities involved approve our application for a review Passport. Apparently, this one doesn’t require a police verification, so we should have one in our hands very shortly. Watch this space for more on the Passport. Oh, in case you’re wondering, this monster should set you back by Rs 49,990.