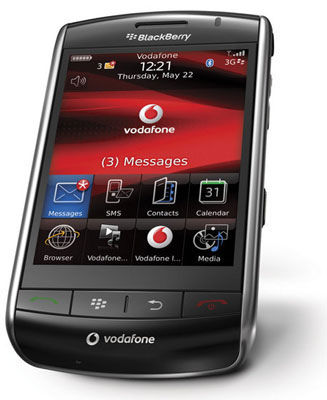 A good news for all the Blackberry users in India. Finally Vodafone has slashed its unlimited internet pricing for BlackBerry users down to almost half, i.e. from Rs1,099 to Rs599. This scheme is really beneficial for the Blackberry users. The website still shows the old tariff but the latest updates can be confirmed from their customer helpline numbers. Aircel, another prominent mobile operator, is trying to have a similar new pricing scheme in place. With Vodafone and Aircel breaking the price barrier for Blackberry services, In the future we expected that other operators will also have launch the similar schemes.

The new plan for Vodafone Blackberry services will require you to pay a 6 month advance payment plan for Rs2,500 and a yearly one for Rs5,000. This will help you save Rs. 180 per month. Earlier you were paying Rs599 on a monthly basis. The new rates are much better than older intermediate plan where they charged you Rs500 for a ridiculously low 500 KB of free data. It is still not as cheap as standard GPRS plans which can go for as low as Rs99 per month for a generous 2GB of usage. But this move should definitely tempt people who are right now on the basic Rs299 plan that lets you do unlimited e-mail, BBM and Instant messaging, but restricted internet surfing. Honestly, it was kinda dumb to have a BlackBerry that does e-mail but can’t access the internet. By making semi-annual or annual payments, charges can get as low as Rs416. if people pay on semi-annual or annual basis. That step may be attributed to Blackberry recent debacle with the Indian government.