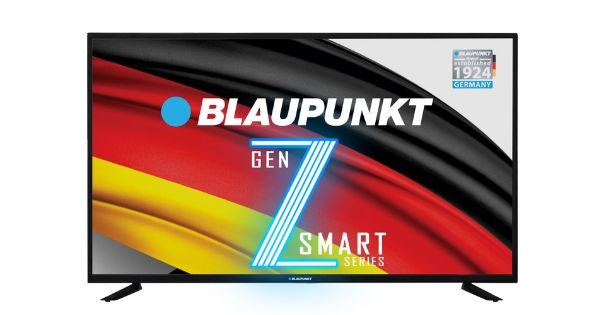 The Blaupunkt Gen Z LED TV price in India starts at Rs 19,999 for the Gen Z 43-inch variant. The larger model, Gen Z 49-inch, will be priced at Rs 24,999. Interested folks can purchase the 43-inch variant starting today, whereas the 49-inch model will be available from September 9th. Both Gen Z Smart TVs are going to be exclusively sold via Flipkart.

The new Gen Z Smart LED TVs from Blaupunkt come with a 1080p panel offering a full-HD resolution. The TVs are powered by a Quad-core 1.5GHz processor, which is what keeps the TV running lag-free. Blaupunkt has included dual speakers on both TVs, which output a total of 30W audio with Dolby Digital support and surround sound. The Gen Z series comes with built-in Wi-Fi and screen mirroring as well.

Coming to the operating system, the TVs run on an Android-based OS, which allows users to download apps, games and more. Users can watch their favourite shows on Netflix, Amazon Prime, Hotstar, and other streaming apps. Blaupunkt also states that the processor allows for a great gaming experience on the large screen. Thanks to the screen mirroring and miracasting feature, users can screen their mobile displays on the TV and view photos, videos, etc.

Blaupunkt also includes a TV Care app in the software, which can help users find answers to all their queries.