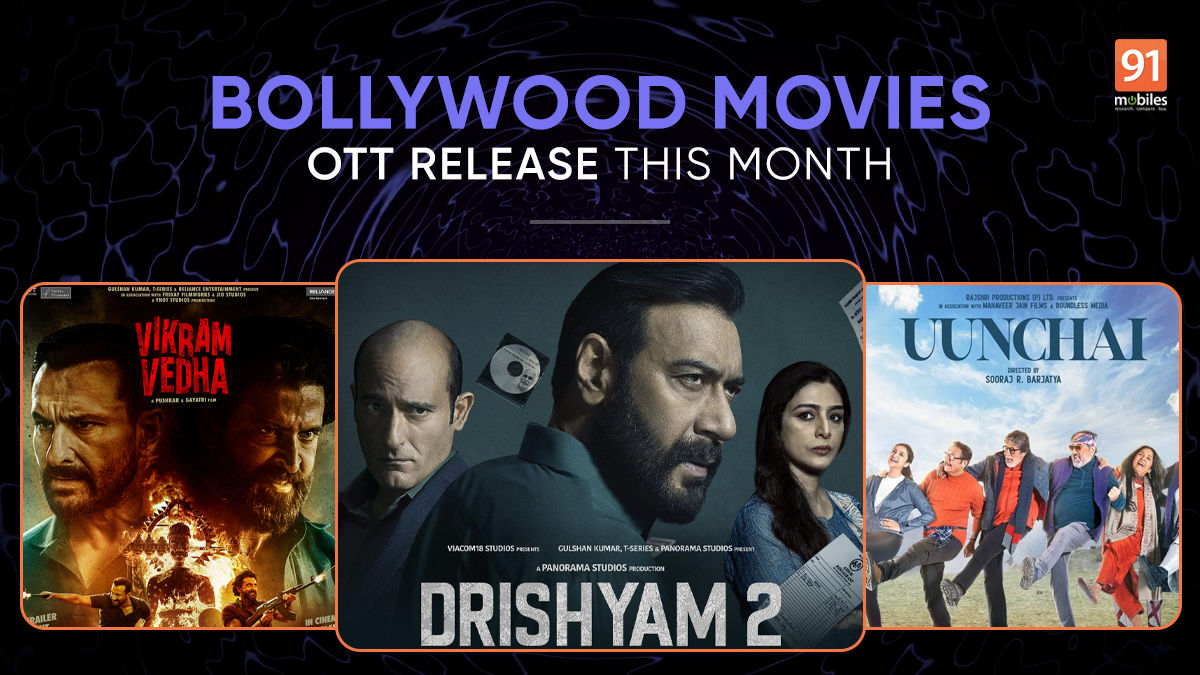 There are some much-anticipated Bollywood movies lined up for release on different OTT platforms like Netflix, Amazon Prime Video, Zee5, and others in January 20223. The list includes Drishyam 2, Vikram Vedha, Mission Majnu, Uunchai, Chattriwali, and more. Some of these Bollywood movies have done well at the box office and are now ready to take on the digital space. On that note, read on to know all about the upcoming Bollywood movie releases on OTT this month.

List of Bollywood movies on OTT (Jan 2023): Where to watch and release date

Bollywood movies on OTT to look forward to

This supernatural comedy narrates the story of two friends and horror movie fanatics, Gullu (Ishaan Khattar) and Major (Sidhant Chaturvedi). As the plot unveils, the two meet a friendly phantom named Ragini (Katrina Kaif) and with her help, start a ghost-busting service only to find themselves facing an evil tantric, Atmaram (Jackie Shroff), later. An Excel Entertainment production, this Gurmmeet Singh directorial was released in theatres on November 4th, 2020, and received mixed reviews from critics. The movie was made available on Amazon Prime Video on December 21st, 2022 albeit on rent. But not anymore! Starting January 2nd, 2023, the film has been made available for streaming rent-free for all Prime users. So go watch it now!

A Sooraj Barjatya directorial, Uunchai centres around the lives of three best friends in their 60s who go on a trek to the Mount Everest Base Camp to fulfil their fourth mate’s last wish. What makes this movie a must-watch is its ensemble cast with veterans Amitabh Bachchan (Amit), Anupam Kher (Om), and Boman Irani (Javed) playing the three friends, supported by talents like Sarika (Mala), Neena Gupta (Shabina), Parineeti Chopra (Shraddha) and others. Followed by a great run in theatres post its release on November 11th, 2022, Uunchai is now entertaining the OTT audiences via Zee5.

If you missed catching this critically-acclaimed action thriller featuring some of Bollywood’s biggest names like Saif Ali Khan (SSP Vikram), Hrithik Roshan (Vedha), Radhika Apte (Priya) and Rohit Saraf (Shatak) in theatres, fret not! Vikram Vedha is all set for its OTT release on January 9th as per rumours; however, the final date is yet to be confirmed. The movie will be streaming on Jio Cinema and Voot Select. Vikram Vedha tells the story of an honest police officer who sets out on a mission to track down and kill a dreaded gangster. The film was released in theatres worldwide on September 30th, 2022 and was received well by critics.

Released in theatres on 18th November 2022, Drishyam 2 is the sequel to 2015’s blockbuster crime thriller Drishyam starring Ajay Devgn and Tabu. Set seven years after the events of the last instalment, this movie puts the spotlight back on Vijay Salgaonkar and his family as their murder case file reopens in the Goa police station. If you missed watching this intriguing tale of mystery, put it on your January schedule. Drishyam 2 is now streaming on the OTT platform Amazon Prime Video.

Ever since the release of its teaser, Mission Majnu has become one of the most anticipated films to come in the month of January. Based on a brave covert operation that took place in the heart of Pakistan during its war with India in the 1970s, this film is expected to replicate the success of Sidharth Malhotra’s patriotic offering Shershaah (2021). In the film, the actor is said to be playing the role of an undercover Indian spy who sets out to Pakistan to expose their veiled nuclear programs. The movie will premiere on Netflix India on the 20th of this month.

If you’re a fan of quirky films with a modern-day subject, mark your calendars for the digital premiere of Chhatriwali. Starring Rakul Preet Singh in the role of a quality control head at a condom factory, this long-pending Bollywood movie is set for its direct OTT release on Zee5 on 20th January. A social comedy, this Tejas Prabha Vijay Deoskar-directorial narrates the tale of a young female who takes the job of a condom tester and hides it in public. With supporting actors like Sumeet Vyas of TVF Trippling fame, actor-director Satish Kaushik and Rajesh Tailang of Mirzapur and Delhi Crime, this movie promises to be a fun riot.

Best romantic movies on Netflix: To All The Boys franchise, The Notebook, Life in a Metro, and more