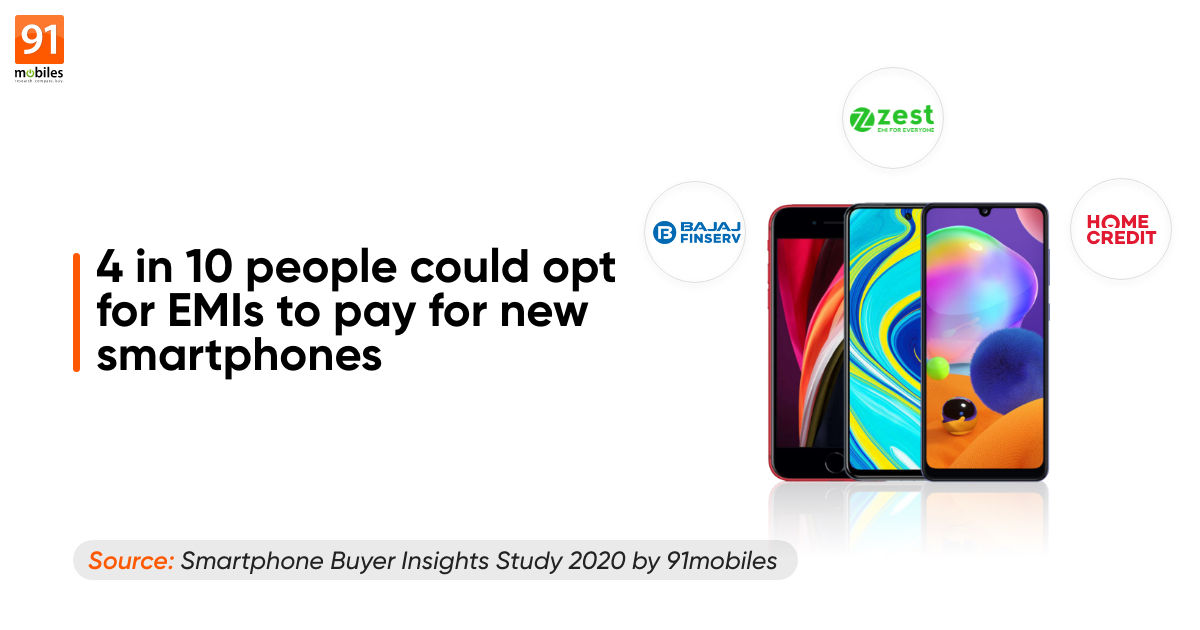 Home Feature 4 in 10 people could opt for EMIs to pay for new...
Highlights

32.5 million. That’s the number of smartphone unit shipments in India in the first quarter of this year, as per Statista. That’s a mind-boggling figure, and via the 91mobiles Smartphone User Insights Survey 2020, we’ve been trying to get into the minds of the users and prospective buyers. The survey received over 15,000 responses, and based on the analysis of the data, we’ve been able to draw up quite a few insights. These pertain to aspects like ownership trends, brand loyalty, aspects that matter, how users shortlist and how they buy their smartphones. In this post, we’ll be focussing on aspects related to the actual purchase, how people buy, and how they pay for these devices. 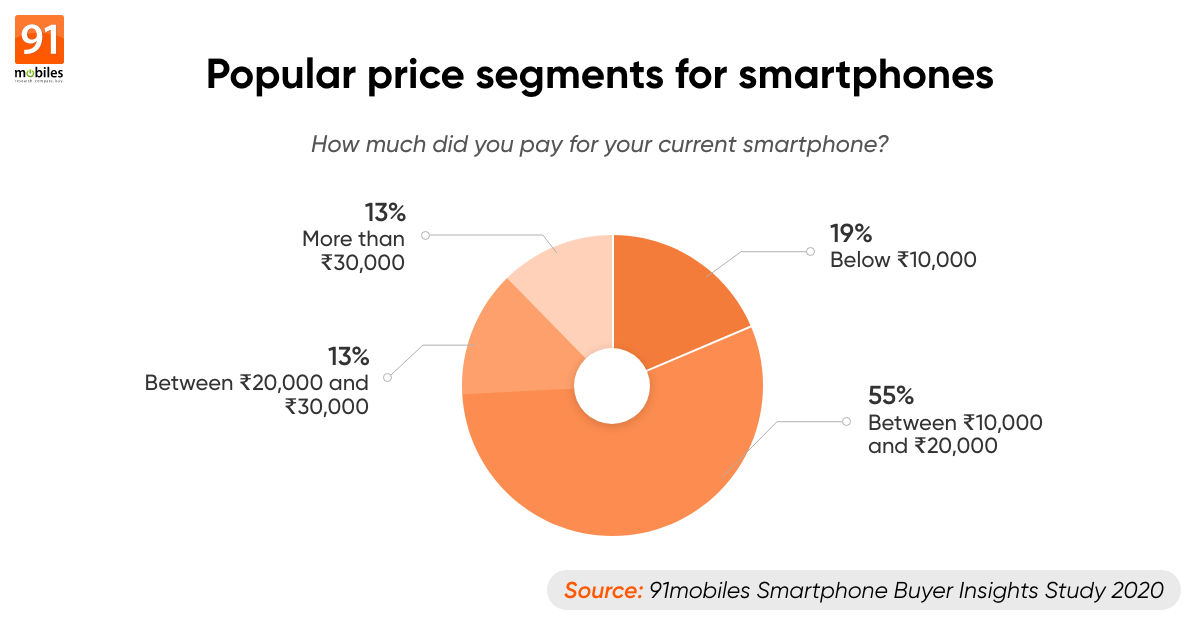 Based on the amounts people paid for their current smartphones, we can safely say that the Rs 10k-Rs 20k price segment is the most popular, given that 55 percent users own smartphones in that bracket. The budget segment, with smartphones priced south of Rs 10k, makes up about 19 percent of users. 13 percent users own smartphones priced between Rs 20k and Rs 30k, while another 13 percent own handsets priced above Rs 30k. Clearly, Rs 10k-20k bracket is where the most action is at, and that’s also the most dynamic segment in terms of the smartphone options available. Most smartphone brands like Samsung, Realme and Xiaomi, and others, have some compelling contenders available in that segment. 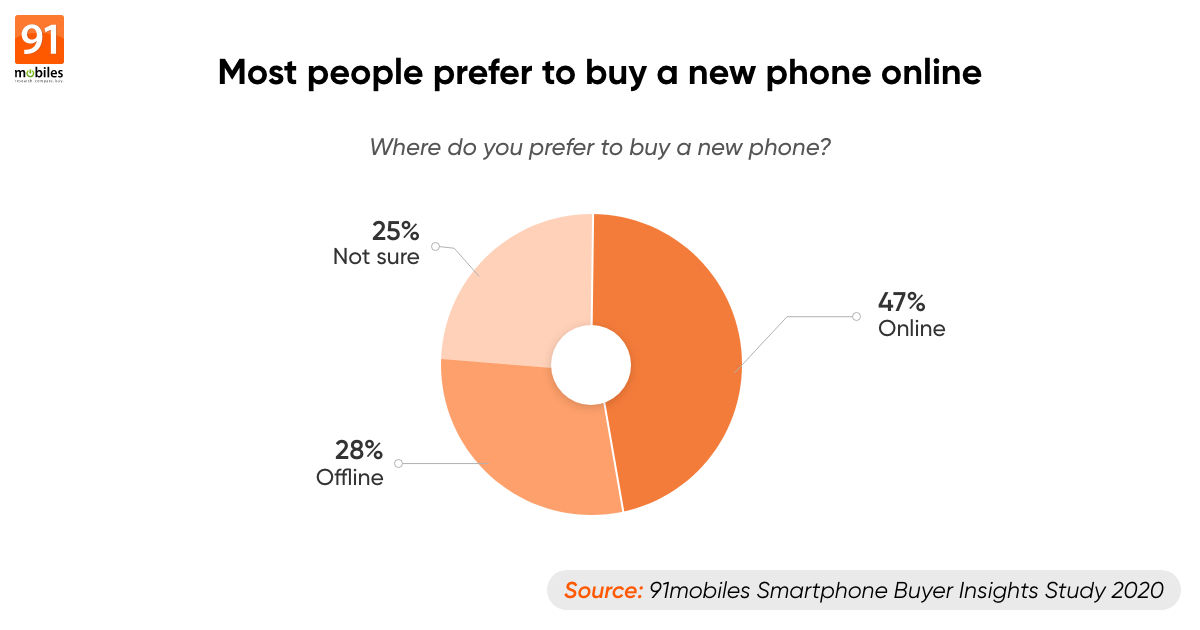 Where are all these smartphones being purchased from? Well, 47 percent of our survey respondents have said they’d prefer purchasing a new smartphone online, as against 28 percent who said they’d buy offline. About 25 percent weren’t sure where they’d buy from.

Worth noting is the fact that last year, 44 percent users had said they’d buy online, so a larger chunk of people seem to be now taking the online route. Secondly, our latest survey data is pre-COVID, so there’s a good chance that the percentage of people who’d prefer buying a new smartphone through online sources would has increased further. And while 40 percent said they’d prefer buying offline last year, the same number has dropped to 28 percent this time. While it’s apparent that a larger share of people would want to avoid visiting offline stores in the post-COVID era, there are a few obvious benefits of shopping for smartphones online, explaining why most people prefer this route. For one, there’s a perception that prices are lower online, and people can make use of discount offers (such as those available on credit / debit cards of certain banks from time to time).

In fact, when asked where they’d prefer to buy from if the online prices of their preferred smartphone were cheaper by Rs 1,000, no less than 65 percent users said they’d buy online.

Now that we know which price bands are popular and where people prefer buying new smartphones from, let’s get to the meat of the story – how they prefer paying. 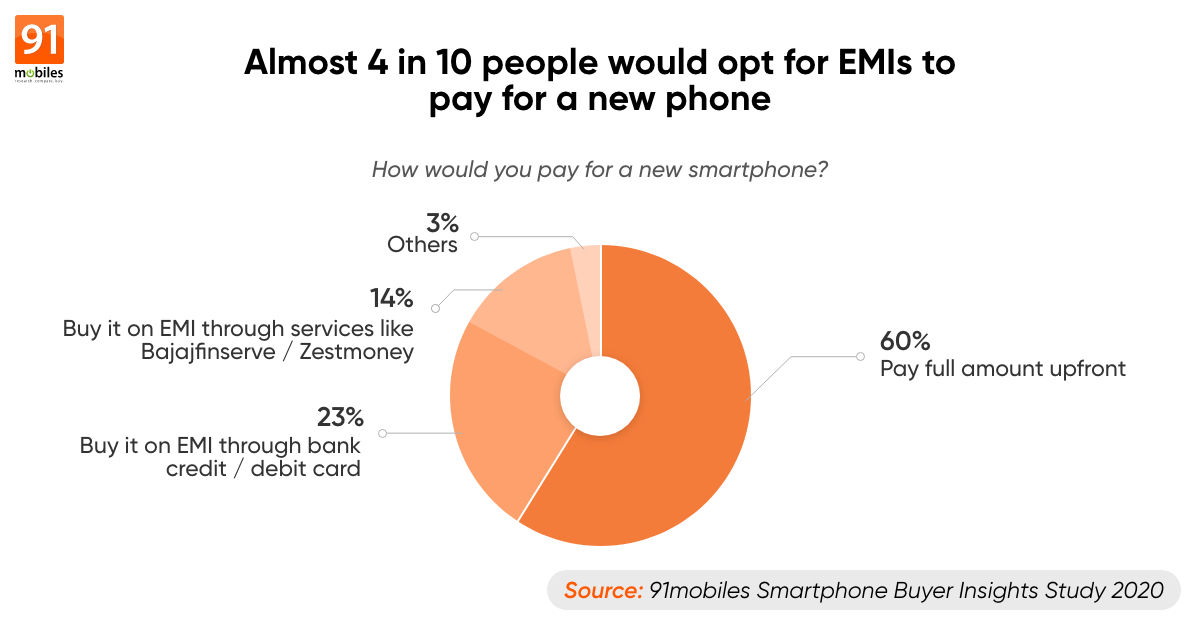 Here are a few related points when the data is broken up by factors like age and gender: 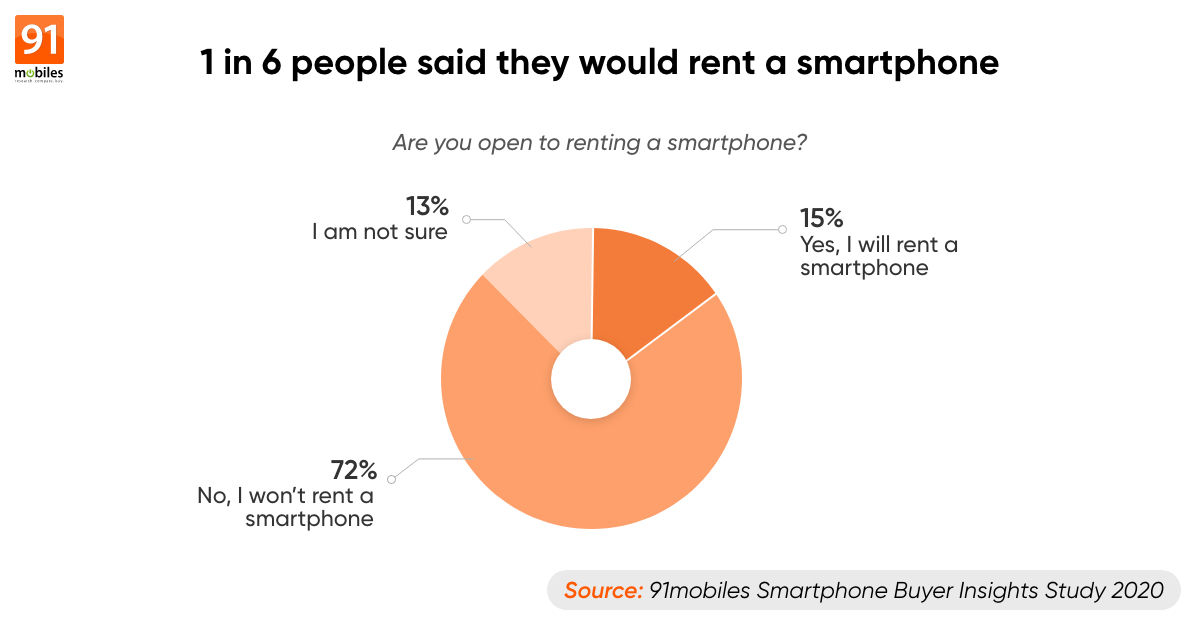 Other factors: extended warranty and more 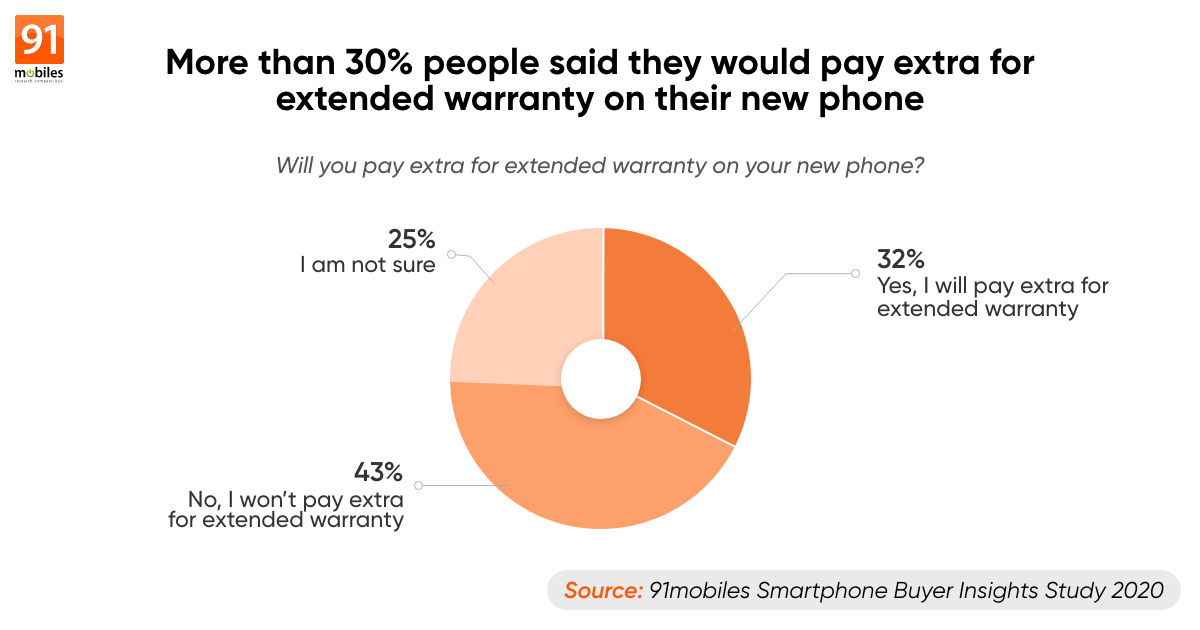 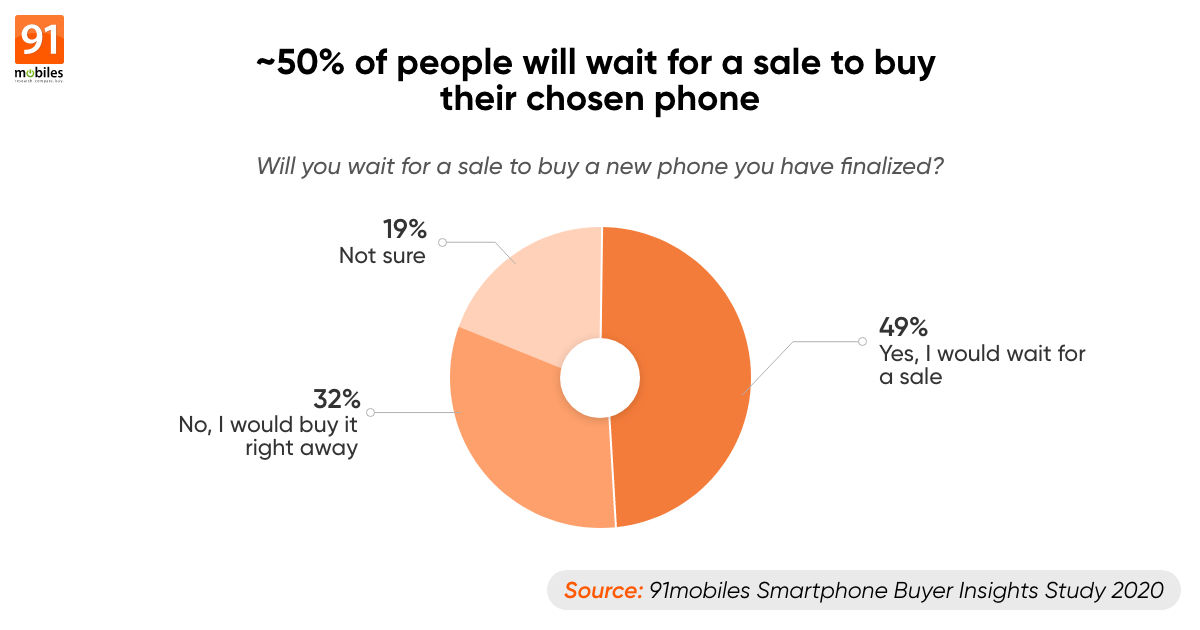 Smartphone purchase: what people do with their old devices 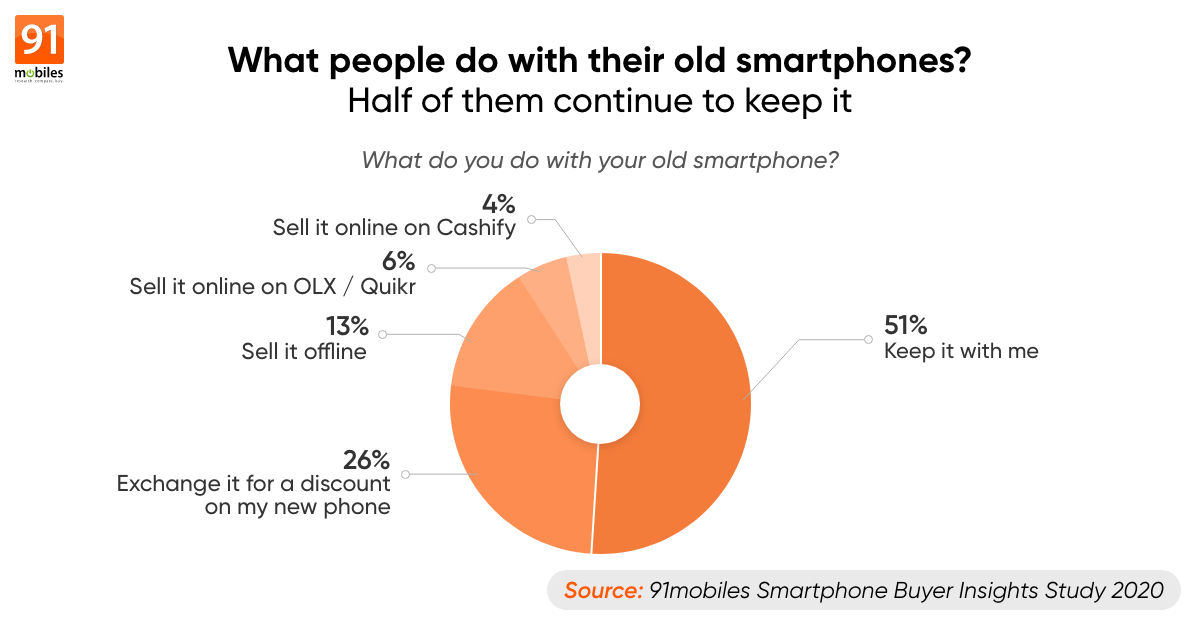 Coming next: a full summary of the 91mobiles Smartphone Buyer Insight Survey 2020 with all the key highlights.
ShareTweetShare
Share