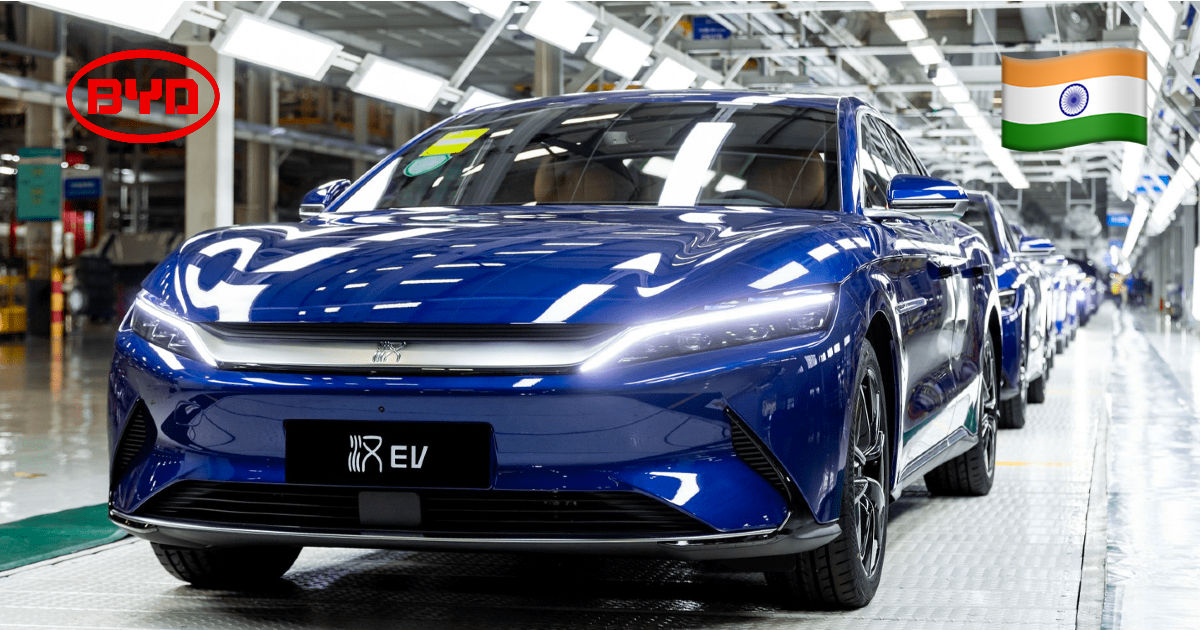 Chinese EV maker BYD has become the world’s largest EV manufacturer after having dethroned Tesla in Q2 2022. The Chinese automaker secured 266 percent YoY growth and sold a record number of vehicles beating out Elon Musk-led Tesla Inc by around 1 lakh units. These new milestones come as the global market opens up to EVs with a staggering 61 percent YoY growth in EV sales.

The world’s current EV leader, BYD, also plans to open a shop soon in India and will start off with a new EV product this festive season. BYD currently has its e6 EV MPV on sale in India; however, the product initially catered to the commercial fleet market. Mainstream products are likely to follow with the new wave of interest from the Chinese EV maker in the Indian EV market.

Chinese EV manufacturer BYD Auto sold more than 3,54,000 EV units in Q2 of 2022 and has recorded a 266 percent YoY increase in sales. The exponential growth has helped BYD secure the top rank in EV production, and the company has successfully toppled Tesla, which so far secured the top spot.

Tesla Inc, the American EV maker, enjoyed a certain first mover advantage as EVs became more mainstream globally. However, it has fallen short of its production targets and has lost its top spot to Warren Buffet-backed BYD.  Tesla recorded a 27 percent YoY sales growth, having shipped 2,54,000 units during the same Q2 2022 period.

BYD to enter the Indian EV market this festive season

The world’s largest EV manufacturer, BYD Auto, plans to enter the Indian EV space this festive season with products focused on the more mainstream EV market. The Tesla competitor plans on assembling its products in a facility in Sriperumbudur, near Chennai.

BYD Auto could also utilise the upcoming Auto Expo 2023 in Delhi to showcase new products that could make it to India. The Chinese EV maker will likely plan out a portfolio comprising of electrified hatchbacks, sedans and, most importantly, SUVs. The brand initially plans to sell 10,000 units of assembled vehicles in India, with future plans to set up a local assembling facility in the country itself.

BYD might bring its well-known Blade battery technology, which could enable its vehicles to have a claimed range of around 450 to 500km on a single charge. Sanjay Gopalakrishnan, Senior Vice President of BYD India’s Electric Passenger Vehicles Business, suggests the launch of the Atto3 EV SUV in India after having received warm response for the BYD e6 EV MPV.

While the Indian government has stepped up stringency in allowing Chinese businesses to set up shop, Senior VP Gopalakrishnan emphasises that BYD Auto would not require to go through such processes. The company is planning on extending the lineup with the Atto3 EV SUV and other models. According to the top executive, these new models should help BYD achieve its 10 to 15 percent market share in the EV segment by 2030.

The BYD e6, which was offered to commercial buyers and corporate partners in India, has managed to sell 450 units so far, and the Chinese automaker is hopeful to sell 1,000 units by the end of 2022.

Kia installs India's fastest EV charger in Kochi, juices up EV6 from 10 to 50 percent in 18 mins

Interestingly, the company isn’t new to India and has been in the country since 2007. BYD produces electronic parts, batteries, and mobile phones in Oragadam’s industrial belt, near Chennai, Tamil Nadu. BYD has also been manufacturing batteries and bus chassis for Olectra from its Sriperumbudur facility. The company plans to upscale this Sriperumbudur facility with 100 people manpower and 10,000 vehicle capacity by the year-end to meet its passenger vehicle goals.

The BYD Atto3 EV SUV could be the brand’s first mainstream EV product for the Indian market. The Atto3, if launched, will compete with the likes of the Hyundai Kona EV, MG ZS EV and the Tata Nexon EV MAX on the lower spectrum. The vehicle could cost around Rs 20 – 25 lakhs and will offer 400 to 500km of range on the ARAI certification cycle.

BYD currently has 12 dealerships across 12 cities, and it plans to expand to 18 cities with 24 outlets within 6 months.