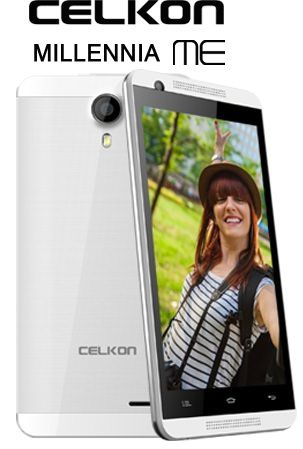 “The Millennia ME features a 5-inch display, a quad-core CPU, and 4GB of internal memory”

Celkon has launched a new selfie-focussed budget smartphone in India, the Millennia ME, which the brand recently listed on its official website. The device offers a 5MP fixed-focus front camera and a 5MP autofocus rear shooter with an LED flash. Priced at Rs 5,555, the smartphone will initially go on sale in white and silver variants, but there will be three more hues on offer in the near future.

The Celkon Millennia ME Q54 features a 5-inch IPS display with a resolution of 800 x 854 pixels, and runs Android 4.4 KitKat. The device is backed by a 1.2GHz quad-core processor, coupled with 512MB of RAM and a 2,000mAh battery. There’s 4GB of internal storage on board, which can be further expanded by up to 32GB via a microSD card. The dual-SIM handset comes with 3G, Wi-Fi, Wi-Fi Hotspot, micro-USB, and Bluetooth connectivity options.

The Celkon Millennia ME will compete against the likes of the iBall Andi Uddaan, Intex Aqua Slice, Obi Leopard S502, and Karbonn Machone Titanium S310, all of which offer 5MP front cameras.