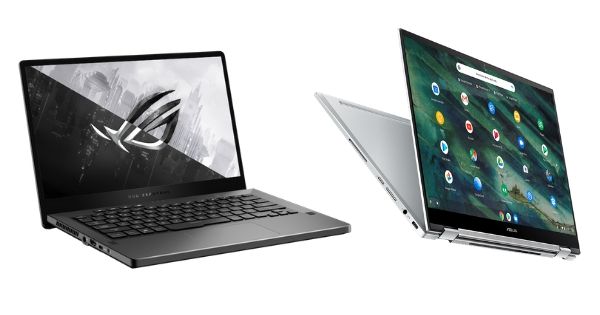 “The ROG Zephyrus G14 comes with an optional lid that features an LED array, which can display images and GIFs”

ASUS announced a bunch of new products during its CES 2020 event. The company unveiled the new Chromebook Flip C436, and the slim-and-powerful ROG Zephyrus G14 gaming laptop. The new Flip C436 is the successor to the Flip C434 and offers a thinner design with better hardware. On the other hand, the ROG Zephyrus G14 has been claimed to be the world’s first 14-inch laptop to feature a 1440p display. The screen offers a 2,560 x 1,440 resolution and 60Hz refresh rate. The laptop can also be configured with a 1080p 120Hz display and is also the first device to use the octa-core AMD Ryzen 7 4800HS processor.

The ROG Zephyrus G14 comes with a 14-inch screen with two display options. Users can either choose a 1080p 120HZ panel, or a 1440p 60Hz that covers 100 percent sRGB gamut. ASUS also introduced an optional lid for the laptop, which features 1,215-mini LEDs that light up to display images and GIFs of your choice. ASUS calls it AniMe and the lid adds 2mm of extra thickness.

The laptop can be configured with up to an octa-core AMD Ryzen 7 4800HS CPU and the latest Nvidia GeForce RTC 2060 GPUs. According to the company, the Zephyrus G14 can offer up to 10 hours of battery life when used with the provided 65-watt USB-C adapter, which disconnects the discrete graphics. A 180-watt AC adapter is required to game on the G14. The laptop has a good keyboard with 1.5mm of travel , but doesn’t offer an in-built webcam.

Coming to the new Chromebook from ASUS, the Flip C436 is an improved version of the C434. It features the same 14-inch 1080p OLED display found on the previous model, but with slimmer bezels and a smaller overall footprint. The Chromebook Flip C436 is powered by the latest 10th Generation Intel processors and can be configured with up to a Core i7.

The laptop comes with up to 16GB DDR3 RAM and 512GB SSD storage. ASUS has also included other upgrades such as an improved fingerprint scanner, Bluetooth 5.0, Wi-Fi 6, and a quad-speaker system. According to ASUS, the Flip C436 can offer up to 12 hours of battery life thanks to its 43WHr battery. It gets two USB Type-C ports instead of USB A. Pricing and availability isn’t known yet.