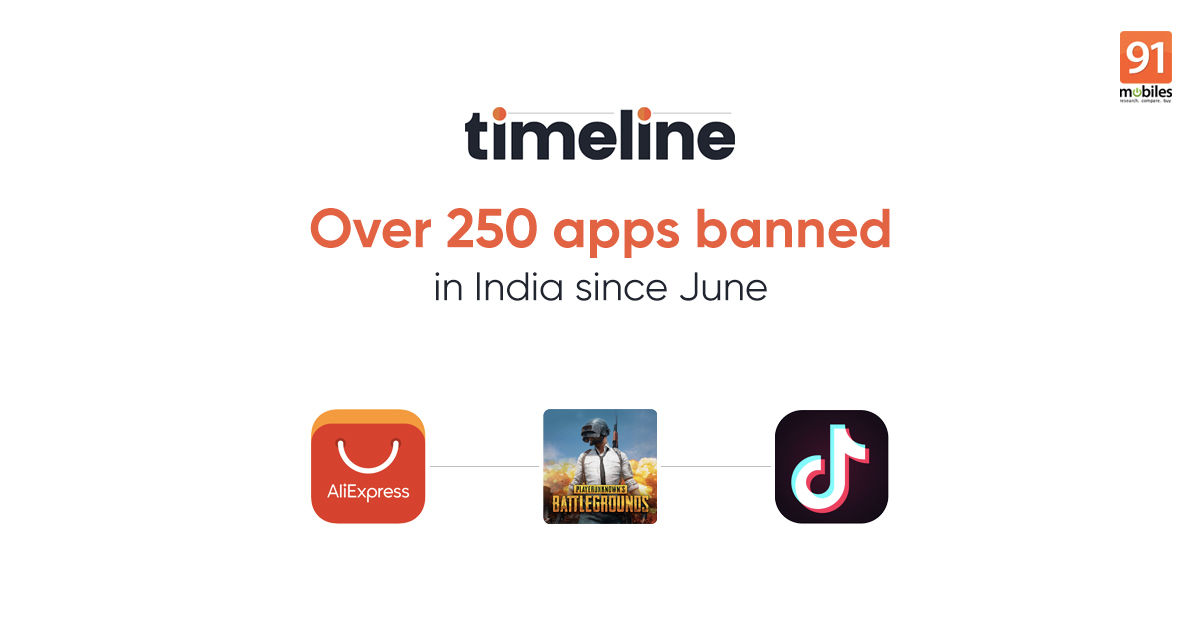 On Wednesday, India banned 43 new Chinese apps, including some popular names like AliExpress and Lalamove India. The move was taken as these apps were seen as “engaging in activities prejudicial to the sovereignty and integrity of India, defence of India, the security of the state and public order”. The 43 Chinese apps banned in India list was detailed in our previous report, but this is just one set in a series of bans on apps that the government has ordered over the past few months.

The ban on 43 apps on Tuesday was the fourth major ban on Chinese-related apps in the past five months. To recall, it all started with the ban on 59 Chinese apps back in June, which included the extremely popular TikTok. Since then, the government has blocked other popular names like WeChat and PUBG Mobile, though the battle royale game is ready to make a comeback in a new avatar, called PUBG Mobile India. Here’s a timeline of banned Chinese apps in India since June.

The government banned a total of 59 apps in June due to the “emergent nature of threat” they pose. The reason behind the ban on the apps is similar to the one given for the ban on Tuesday. The apps were seen as “prejudicial to the sovereignty and integrity of India, defence of India, the security of the state, and public order.” The list of 59 apps included popular names such as TikTok, CamScanner, ShareIt, Helo, Likee, Xender, UC Browser, Clash of Kings, ES File Explorer, DU Cleaner, Clean Master, and Mobile Legends. These apps were soon pulled from the Google Play Store and Apple App Store. Notably, these apps could not be accessed even through the use of a VPN.

The following month, 47 more Chinese apps were banned in India. The list did not include any prominent names and were largely clones of the original 58 banned apps. At the time, the government did not release a list of the 47 apps that were banned, but it reportedly included the likes of TikTok Lite, Helo Lite, ShareIt Lite, Bigo Live Lite, and so on. Following the ban, it was also reported that around 275 more Chinese apps were under the radar, including PUBG Mobile.

September saw the ban on PUBG Mobile and 117 more Chinese apps. The ban on PUBG Mobile was a major blow with millions of fans of the popular battle royale game in the country. In addition to PUBG Mobile, the government also banned apps like VPN for TikTok, Baidu, WeChat, Ludo World, Cleaner, and Alipay. While PUBG Mobile was removed from the Android and iOS app stores soon after the ban was announced, it was still playable for those who had already installed the app. In an effort to re-launch the game in India, PUBG Corporation cut ties with Tencent Games and took over publishing rights. The company recently announced that PUBG Mobile India is set to launch in the country with some localised features.

Jump to November 24th and the government announced a ban on 43 more Chinese apps in India, including AliExpress, Lalamove India, CamCard, WeTV, Cashier Wallet, and more. AliExpress is a popular consumer e-commerce app of Chinese giant Alibaba, while Lalamove India provided on-demand, same-day delivery services. These apps are still visible on the Google Play Store and may get pulled in the days to come. Here’s a list of 43 apps that the government banned on Tuesday:

As of November 25th, the Indian government has banned over 250 Chinese apps in the country and it seems like we may see more such apps getting blocked in the months to come.
ShareTweetShare
Share