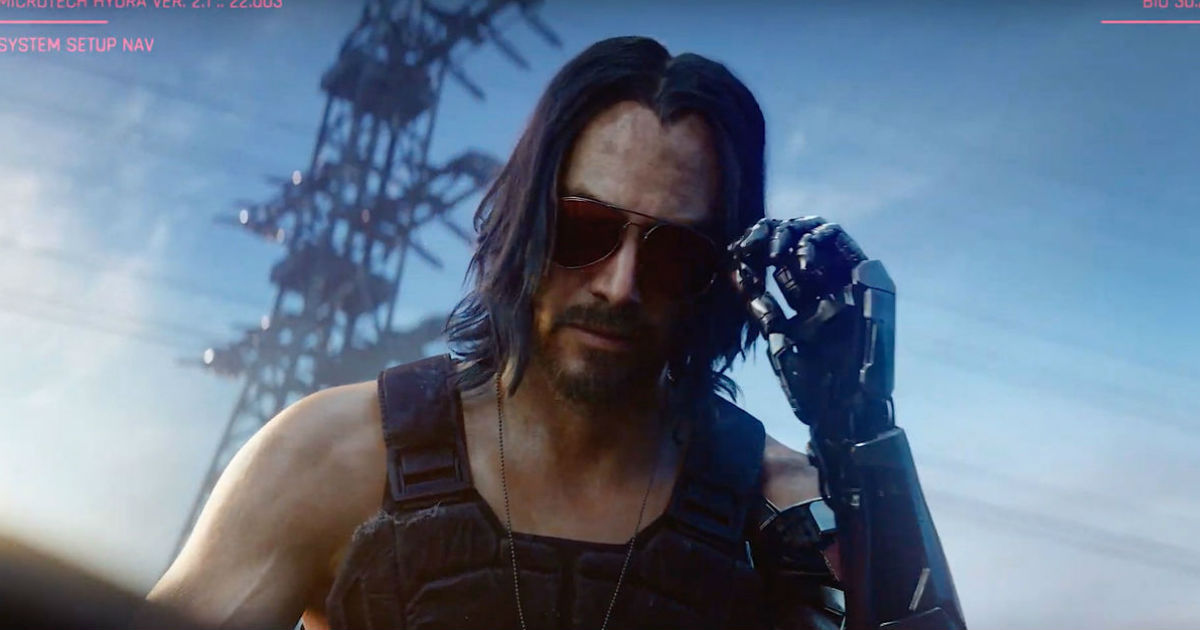 “This year’s E3 2019 has seen a host of heavyweight trailers being dropped, with each being more impressive than the other. Here are the best.”

The annual gaming convention extravaganza, E3 2019, is officially underway, and with that, most of the headlining keynotes by game developers and publishing houses have taken place. As with every year, we have come away with an impressive list of titles this year too, this time featuring two surprise appearances — Halo’s vaunted Master Chief, and none other than Keanu Reeves. Beyond that, too, we have seen multiple launches that have made heads turn, and we cannot wait for them to launch through the year, and into 2020.

No gaming convention is ever complete without big gun Bethesda firing a few bombshells into the air. While its E3 2019 keynote may not have been the most prolific one of its lifetime, it has been nothing short of fantastic either, simply with the sheer list of games that they have brought to the table. The main theme of the Bethesda keynote for this year was “Be connected” — a positive nod to the rising involvement of the internet, cloud computing, streaming platforms and constant connectivity as essential factos of gaming. While Bethesda remained true to its theme, it did not forget what it was primarily in the room for — awesome games.

With Google having thrown caution into the air with Stadia, it now looks like every big name in technology worth their salt is going to invest in this segment. With the sheer number of smartphones, tablets and televisions spread worldwide, coupled with the comparatively dwindling number of dedicated gaming hardware, it is no surprise that even game publishers and developers are looking at this too. The result — Orion.

Bethesda’s claims were not about doing anything dramatically different. Instead, it focused on doing it right — provide information relevant for the mainstream audience. Orion can reportedly stream at 20 percent faster frame rates, while taking up 40 percent lesser bandwidth than competition such as Google Stadia, Microsoft xCloud, Sony PlayStation Now and Valve Steam Link. Its claims remain to be validated, but with the Doom 2016 smartphone demo that was played on stage, the service seems pretty promising.

One of the world’s most favourite shooter games is back, and this time, it is badder and bloodier than before. Doom Eternal sticks to the typical theme of Doom, while improving how you battle, and the rewards you get for inflicting innovative kills. As always, the alien-slaying video game remains as awesome as ever, and you can play it from November 22, 2019.

Arkane Studios, the developers of the Dishonored series, is back with a new game, Deathloop. Truth be told, the demo seemed mighty close to Dishonored at times, especially the swordplay elements. It appears to have the swanky graphics elements that we expect from most new video games of late, but unfortunately, no reveal date was announced.

Yet another legendary title getting a new makeover with a few additional features. However, Youngblood still seems worth your time, for you now get improved shooting mechanics, and the headlining part — co-op fighting where you can team up with your friend to take on everyone and everything. The latest rendition of Wolfenstein releases on July 26.

Elder Scrolls didn’t really get the best share of new features, with Blades being a new version of the same game, and essentially being a DLC that is available for all platforms ad will also come to Nintendo Switch later this year. In addition, Elder Scrolls Online also gets two new DLCs — Elsweyr and Scalebreaker, the latter of which will be released later this year.

If you think you’ve had it with Fallout 76, think again. Along with a new DLC pack, Fallout 76 is also joining the battle royale bandwagon with a 52-player online battle royale mode. We don’t have the date for when it would be introduced, but Bethesda says that it is coming soon. Let’s hope things do not go downhill this time.

Fans of horror games, rejoice! Gaming legend Ikumi Nakamura hit the Bethesda E3 stage to unveil Ghostwire Tokyo — a brand new game that fuses survival, reality-driven horror with the paranormal. The graphics are intense, and characterisation is top notch, which also makes it very spooky. Yet again, there is no release date available, and we do not expect to see it in person until 2020.

Possibly the most hyped of EA’s announcements, Star Wars Jedi: Fallen Order falls well within the purview of a Star Wars-esque storyline. Set in the aftermath of a holocaust on Order 66 Imperial base, Rebel Cal Kestis and his buddy droid BD-1 start ripping through the Imperial stronghold with some fancy Lightsaber movement and impeccable timing. It certainly looks quite exciting, and particularly for those who are fans of the Star Wars franchise. If you cannot wait to play it, November 15 is the day you can buy it and get cracking at the Imperial boss.

No year is really complete without FIFA, and the 28th regular rendition of the game continues EA’s major cash-spinner with some improvements. With the Journey story mode coming to an end, EA has decided to introduce Volta — a street football mode where you can play with men and women in the same (or different) teams, take on 3v3 or 5v5 matches (even without a ‘keeper), and go all out and have the biggest football stars fight it out in professional futsal pitches. Other additions include an overhaul of the AI engine to make player runs more realistic, defending more emphatic, and more accurate physics that replicate ball spins and swerves closer to reality. For all those who religiously wait for the annual release, FIFA 20 hits the stores on September 26.

The PUBG-rivalling battle royale game premieres on July 2. You will get a new character, Watson, to play with, along with a new LMG that we’ve seen in other games to be pretty nifty. You can also get a new, improved battle pass in the game, while a new Rank Mode aims to rile up competition in the Apex Legends player base in order to take on PUBG and Tencent’s dominance of the segment.

The biggest highlight of Battlefield 5’s updates will unfortunately come later this year — Chapter 5, which shows the initiation of the US-Japan conflict at World War II. Other updates, while being directed at increasing player engagement, can be best referred to as incremental and iterative. These include two new multiplayer maps, multiple new single player campaign maps that will be unveiled onward of June 27, and increased player rank to 500, which enables players to fight it out for glory even further.

The much-loved and customised Sims gets a new ‘Island Living’ expansion pack, where you can build beach huts, put on funky shades and neon beachwear, and — wait for it — even dolphins that will interact with you!

Master Chief is back, and how! Halo, one of the most followed and loved video games of all time, is coming back with what has been referred to as a spiritual successor to everything Halo so far, including the Master Chief collection. The gameplay looks just like what you’d expect from Halo, the apocalyptic battle cries are for real, and Master Chief looks as valiant as ever. The much dramatic unveil even overshadowed the hardware announcements to an extent, such is the impact of Halo. As of now, Microsoft has only said ‘Holiday 2020’ as a release date, which means there is still a long time to go until we get to play it.

Almost stealing Halo’s thunder was none other than Keanu Reeves, who stars in the much-awaited Cyberpunk 2077. The dystopian cyborg-reality adventure game is set to premiere on April 16, 2020, and in the new cinematic trailer released by CD Projekt Red, we did not really get to see new gameplay. However, the neon-bathed premise of it looks as good as ever, climaxing at Reeves’ appearance on the E3 stage. If you were already dying to play it because of the incredible visuals, the alluring storyline and the ominous soundtrack, you just got another reason to wait for it.

Among the many new things, Gears 5 gives you the chance to play as Kait, who seems doomed by the dark pull of the Locust Queen. You also get a new mode to play in, dubbed ‘The Escape’, while another alluring new aspect is the addition of the T-800 Terminator suit, where you can play as a Terminator, literally. The dark storyline is further accentuated by an optional pack, that gamers can use to see the return of Sarah Connor to the game.

Built in collaboration with Game of Thrones’ creator George RR Martin, Elden Ring is a brand new game that also has GoT undertones, in the sense that it is an open world where you travel through multiple kingdoms, ruled by different rulers, and gain a wide range of powers an an almighty kingdom. The environment is dark and soul-sapping, adding a very sinister theme to the game, and reminding us all of Dark Souls. A release date is still not around, and as of now, the game only seems to be at the alpha stage.

Microsoft has finally announced the pricing and availability of the Xbox Game Pass for PCs, revealing the base price of $5, and also stating that despite having the same name as the console variant, the Game Pass for PCs will be curated separately. The move brings Xbox-exclusive titles to PCs for the first time, opening up Microsoft’s rigid formations of its hardware strategies. PC titles from the Xbox collection include Forza Horizon 4, Halo Master Chief Collection, Gears 5, Age of Empires II: Definitive Collection and even the new Flight Simulator.