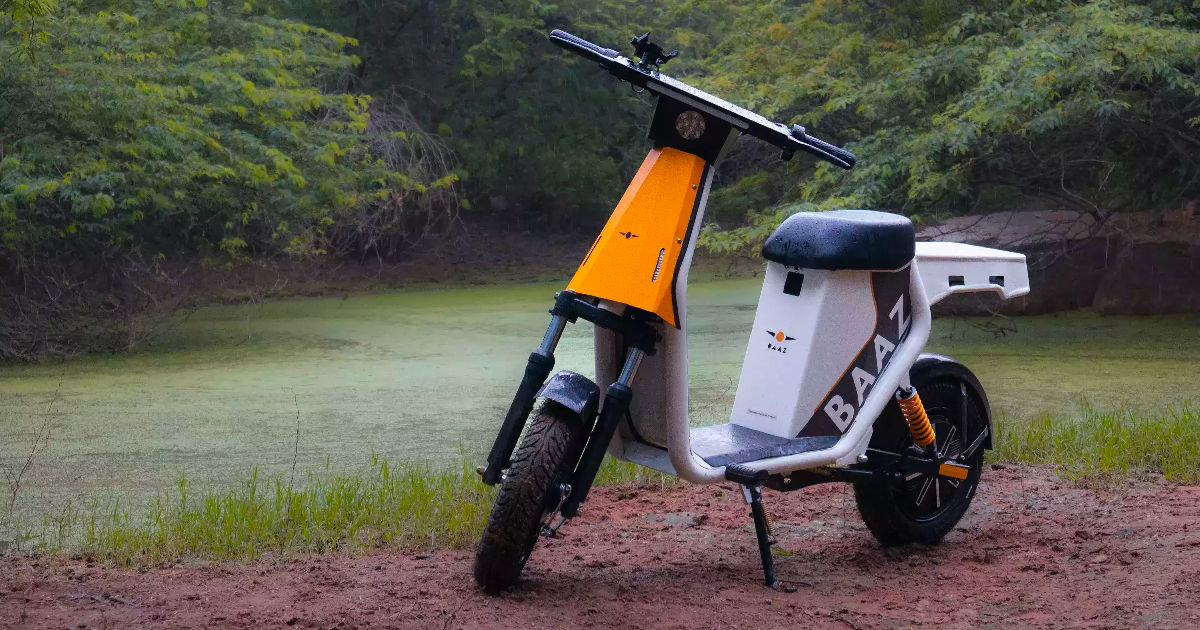 EV startup Baaz Bike has launched a new e-scooter priced at just Rs 35,000 (ex-showroom) featuring battery-swapping technology. The new e-scooter is a brainchild of IIT Delhi alumnae who also happen to be the founders of the parent company ElecTorq Technologies. The Made-in-India e-scooter has been introduced at a cost-effective price point and is designed primarily for delivery agents and small businesses. The company has achieved stellar pricing by excluding the battery pack from the vehicle’s list of billable items thereby reducing the cost of ownership substantially.

For context, Ola recently launched its cheapest electric scooter, the Ola S1 Air, in India. The e-scooter costs Rs 84,999 and fetches the rider a claimed range of 101km on a full charge.

Baaz Bikes, a subsidiary of ElecTorq Technologies, has launched a new low-cost electric scooter with delivery agents and small businesses in mind. The new e-scooter has been priced aggressively at Rs 35,000 (ex-showroom) and does not include the cost of the battery. The company will be siphoning the battery dependence to a network of automated battery swapping stations.

Buyers will also have the flexibility of renting out the e-bikes from Baaz dealerships and can avail of a pay-as-you-move model.

The new Baaz electric scooter measures 1,624 mm in length and has a seating height of 730mm. The e-scooter, according to CTO Shubham Srivastava, has been designed to take the regular bashing that the commercial sector brings. The scooter gets a dual front fork and dual rear shock absorbers. The vehicles are limited to a top speed of 25kmph thus requiring no form of registration.

These e-scooters will be supported via battery packs that the company calls Baaz Energy Pods. The swappable batteries weigh 8.2kgs and have a 1082Wh energy density. The Pods are rated for IP68 weatherproofing. The Pods have an operating temperature of 45 degrees Celcius.

The charging facility will be provided by ergonomically designed automated stations that consider the Indian physique and also have an easy-to-connect charging port. The stations can facilitate up to 9 batteries simultaneously. The Baaz battery swapping network too is certified for IP65 weatherproofing. Other safety features include anti-tampering measures, smoke and water sensors, HVAC-controlled charging slots, etc. The automated systems will be connected via 4G LTE.

Ultraviolette F77 electric bike fitted with India's largest 2-wheeler EV battery, may do up to 307km on a single charge

Baaz Bikes is a subsidiary unit of ElecTorq Technologies, an EV company that was founded by IIT Delhi students. Their website enlists numerous accolades and recognition that the company has credited over time. The company is largely motivated toward solutions for commercial riders and gig delivery operatives.

“At present, we are operating with a cluster approach, where we launch our vehicles within a radius of 4-5 km in Delhi. In the next 8 months, we aim to replicate this model in multiple clusters to achieve density and blanket the entire Delhi with the Baaz Ecosystem, maintaining the high utilisation of the network. As the network grows, it will open new opportunities for us to address a wider audience,”  said Anubhav Sharma, CEO, Baaz Bikes.