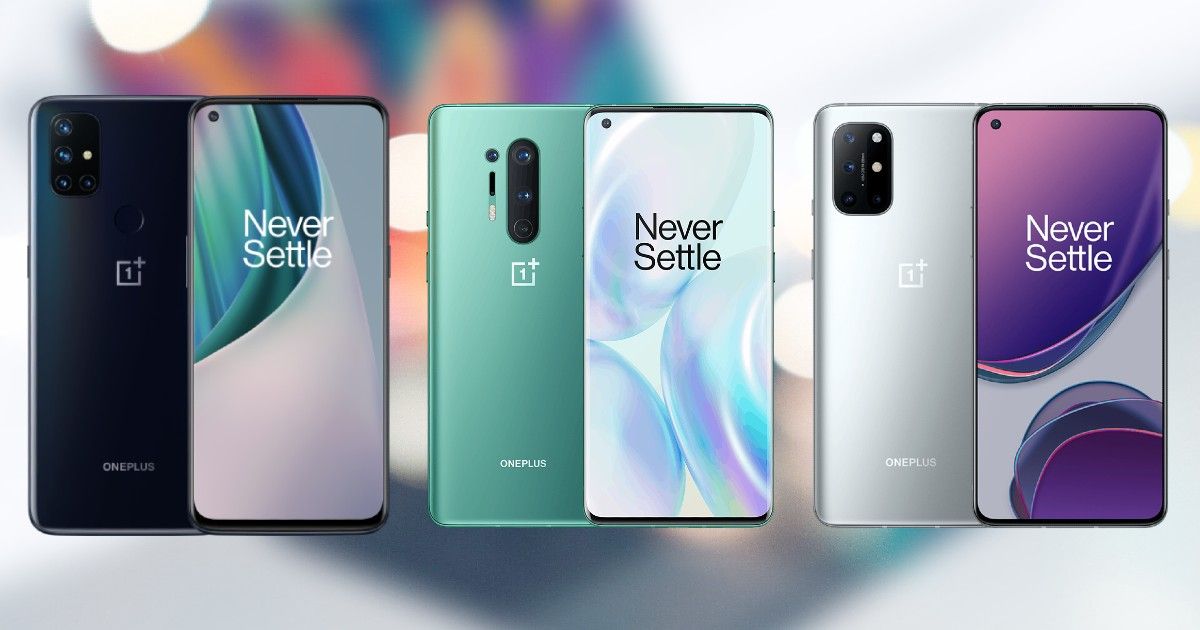 OnePlus has been launching one smartphone after another this year, something we aren’t used to seeing from the brand. Just yesterday, the company unveiled new OnePlus Nord N10 5G and Nord N100 phones. They come soon after the OnePlus 8T flagship, which was also launched this month. In total, OnePlus has launched as many as six smartphones in 2020, ranging from entry-level to ultra-premium. With the debut of the Nord series, OnePlus has expanded its smartphone offerings this year. Unfortunately, not all Nord-series phones will be launching in India. Let’s take a look at every OnePlus smartphone launched in 2020 (so far!).

OnePlus Nord N100 is officially the only non-5G smartphone from OnePlus phone this year. It is also the company’s cheapest offering yet. The handset ships with entry-level specifications such as a 6.52-inch HD+ display, Snapdragon 460 SoC paired with 4GB RAM, and 64GB storage onboard. For photography, the OnePlus Nord N100 flaunts triple rear cameras consisting of a 13MP primary sensor and a couple of additional sensors for portrait and macro shots. The phone is driven by a 5,000mAh battery with 18W fast charging support. There is a rear-mounted fingerprint sensor. Software-wise, the phone runs Android 10 out of the box. OnePlus Nord N100 price in Europe is around Rs 17,200 and the phone will not be launching in India.

The OnePlus Nord N10 5G slots below the Snapdragon 765G-powered Nord. The handset touts a 6.49-inch FHD+ 90Hz display, 5G-capable Snapdragon 690 SoC, 64MP quad rear cameras, and 16MP front camera for selfies and video calling. The phone runs Android 10-based OxygenOS 10.5 out of the box and packs a rear-mounted fingerprint scanner. The device houses a 4,300mAh battery with Warp Charge 30T support. The OnePlus Nord N10 5G price is around Rs 31,700 in Europe and the phone will not be coming to India as well.

OnePlus Nord (review) is currently the most affordable phone from the brand in India. It was unveiled in the country back in July with mid-range specifications, including the Snapdragon 765G 5G SoC, a 6.44-inch FHD+ Fluid AMOLED display with a 90Hz refresh rate, a 4,115mAh battery, and Warp Charge 30T fast charging. OnePlus Nord also features a quad-camera system, headlined by a 48MP Sony IMX586 primary sensor. There’s a pill-shaped hole-punch cutout on the screen that houses a 32MP main and 8MP wide-angle lens for selfies and video calling. The Nord runs on Android 10 with OxygenOS on top out of the box. OnePlus Nord price in India is set at Rs 24,999 for the base model.

OnePlus 8 (review) is a flagship offering from the brand and is currently retailing in India at Rs 39,999. The handset was launched earlier this year with the Snapdragon 865 SoC, 6.55-inch Fluid AMOLED 90Hz display, 48MP triple rear cameras, and 4,300mAh battery with Warp Charge 30T fast charging support. The handset runs Android 10-based OxygenOS 10 (upgradeable to OxygenOS 11) out of the box. The other specifications of the phone remain pretty much the same as OnePlus 8T.

OnePlus 8T (review) is the latest flagship from the company with a starting price of Rs 42,999 in India. The phone’s highlights include a 120Hz 6.55-inch FHD+ Fluid AMOLED display, Snapdragon 865 SoC, 5G connectivity, 48MP quad rear cameras, 65W fast charging solution, and a 4,500mAh battery. The 8T runs OxygenOS 11 atop Android 11 out of the box. There is an in-display fingerprint scanner for security, 4K video support, dual stereo speakers with Dolby Atmos, and Face unlock.

The ultra-premium, and thus, the most expensive offering from OnePlus this year. The OnePlus 8 Pro (review) is selling in India for as low as Rs 54,999 during the ongoing Diwali sales. It’s the only smartphone from OnePlus to come with an IP rating and wireless charging support. The handset support 30T Warp wireless charging that is rated to add 50 percent juice in just 30 minutes. The phone can survive underwater up to 1.5m for 30 minutes. Other highlights include a 6.78-inch display with QHD+ resolution, 4,510mAh battery, 48MP quad rear cameras, 16MP selfie camera, and Snapdragon 865 SoC under the hood.