Facebook has added the new dedicated Gaming tab to the navigation bar in the company’s main app. As TechCrunch reports, the company hopes to help users find games, streamers, gaming groups they follow, and discover new content based on their interests. This is another big leap for Facebook’s gaming efforts to better challenge Twitch and YouTube. 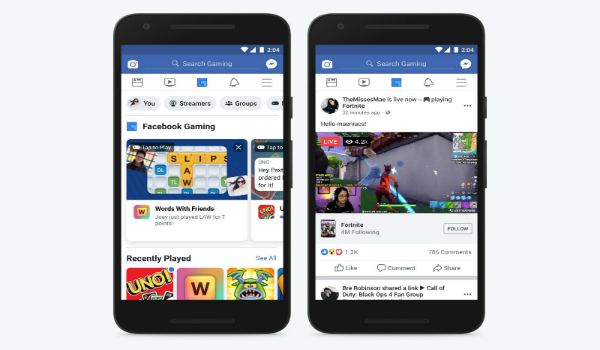 Once you are in the new Gaming tab, the app will present you with a feed of content including games you can play with friends, videos to watch from top streamers, esports organisations and game publishers, and get updates from gaming groups. The Gaming tab is built on the gaming video destination, which the site launched last year as Fb.gg. The hub had offered a collection of all the video games streaming on Facebook and a way for gamers to interact.

Reportedly, Facebook will be rolling out the new gaming tab to users in batches and the count increases as it grows big. The idea to put the gaming tab right in the navigation bar is a productive idea as users will either have to check it out it as they swipe to different sections of the app or it will catch their attention with its presence.

Facebook is also aiming to draw streamers and viewers alike with its virtual currency tipping system, from which, it gets a cut for itself. Facebook’s cut for these tips ranges from 5 to 30 percent and the cut gets smaller when users buy larger currency packs.