Facebook is out with another update for its Android app exactly one day after it released an update for its iOS app. This new app lets users change their profile picture using the app. Additionally, users can even choose and control what News Feeds they want to receive notifications for and what information they want displayed. 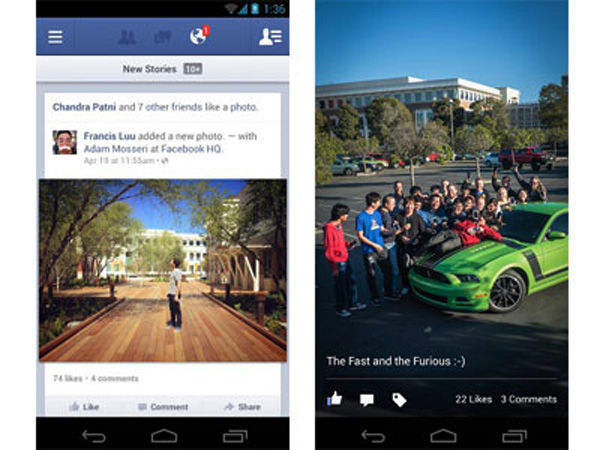 Users can hide stuff they don’t want to appear, and can even report spam on a post in News Feed. Users can also initiate a group message easily and without going through several steps. The app itself lets users check in on what their friends are up to via their activities. Its possible to share updates, photos and videos instantly with people you pick from your friend list. Notifications about every time a friend likes or comments on a post will appear on the app. Chatting and texting is also possible directly and the messages go and are received without any lags. iOS got a new version the version 5.6 with which users can update their cover photos directly. Being able to change the cover photo is a feature that is happily welcomed in the Facebook world. The Facebook iOS app works with the iPhone, iPod touch, and iPad, running iOS 5.0 or higher. You wont miss what your friends are up to, on Facebook and even if your business trip has you off shoring somewhere too far to know what is going on during the weekend life back home, you can stay updated with this app on the go. If you want to instantaneously share an update, video or pictures you can do so with this app. You can even receive notifications each time someone comments or likes a post. Facebook knows the importance of having to update their app constantly and even though the features on Facebook have not had many changes, people want to have access to those all the time through their very portable devices. January saw two updates, one where pictures load up faster this again is dependent on how quick your system is. The second change was in the form of giving users more control over their account. The app lets users even send voice messages, which is uber cool since you can simply speak into your phone and have a fun message carried along to your friend in an instant. This brings out the messenger aspect of Facebook. The Messenger app for Android and iOS both work seamlessly. Through the Messenger, you can send a voice message by clicking the record voice option, and then by long pressing the red button during the record. Releasing the record button will have your message recorded and ready to go out. At present the Messenger lets you record only a minute long message. This seems sufficient as written messages don’t usually take up more than a minute of reading. Longer messages could hamper the whole Messenger appeal and will also result in unwanted lags. Facebook however is focusing on promoting and improving the Messenger app.