91mobiles.com
Home Feature Five reasons why the Samsung Galaxy M51 is a great choice under... 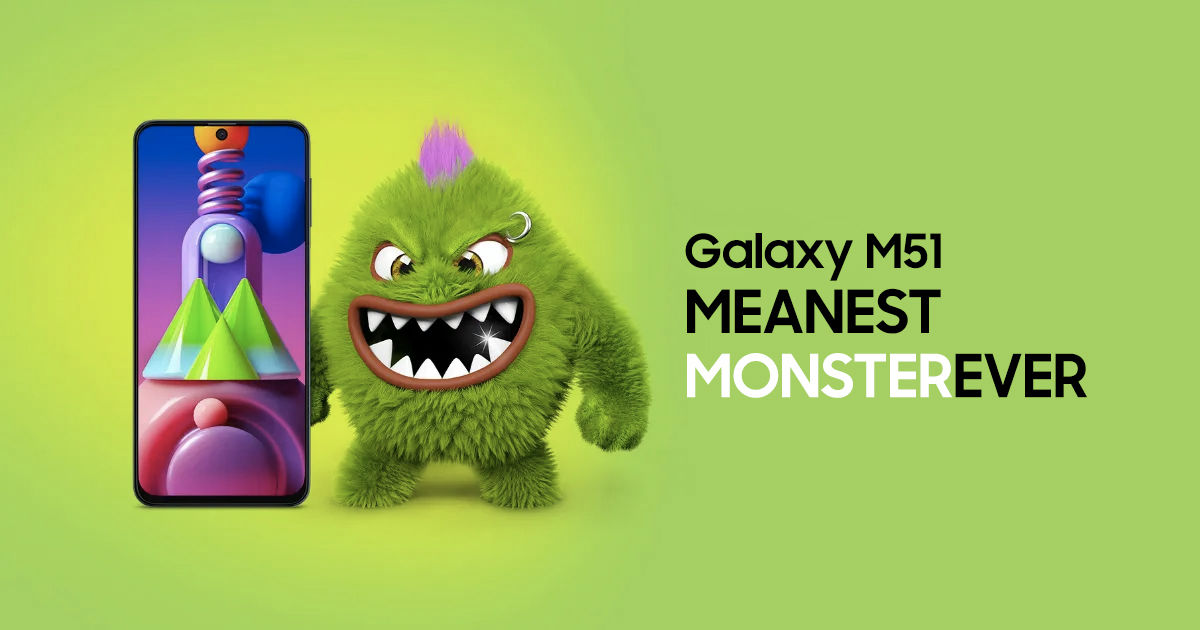 Samsung recently announced its latest M series smartphone – the Galaxy M51 – in India. With its massive 7,000mAh battery, powerful Qualcomm Snapdragon 730G processor, and class-leading camera hardware, there is no getting around the fact that this smartphone makes for a compelling choice if you have Rs 25,000 to spend on a new phone. Be it the excellent 64MP quad cameras at the rear or the giant sAMOLED Plus display, the reasons to love the M51 are one too many. In this article, we delve deep into the many reasons why the Galaxy M51 stands out from the competition.

Monster-sized 7000mAh battery – there’s nothing like it out there 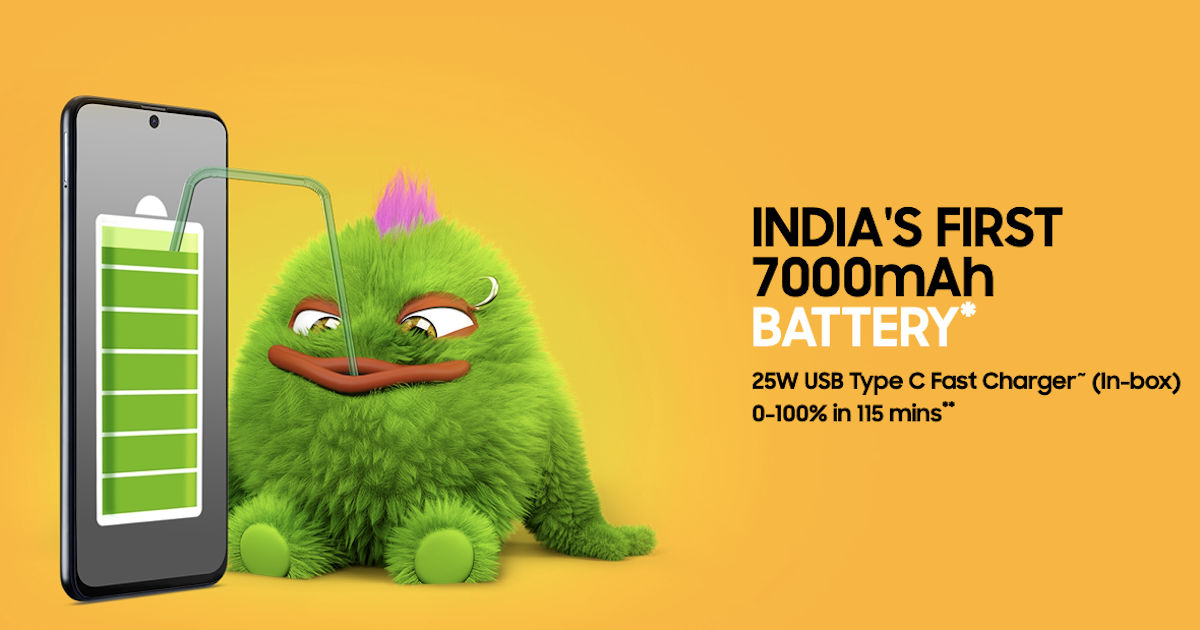 Of course, we start things by talking about the most important aspect of the Galaxy M51 – its battery. Samsung already had an unassailable lead over the competition with its existing M series handsets when it comes to battery life. Models like Galaxy M31 and the new Galaxy M31s already come with class-leading, massive 6,000mAh batteries. With the Samsung Galaxy M51, Samsung has widened the gap with the competition even further. The Galaxy M51 is the first smartphone in India to feature a 7,000mAh battery. This makes it an immensely attractive proposition for Indian millennials who prefer smartphones that offer a battery that keeps going on and on. This smartphone also packs in a 25W fast charger that lets them charge the massive battery in less than two hours – an achievement in itself!

The Galaxy M51 can act as a powerbank too – just connect it with another smartphone or accessory using the bundled USB Type-C to Type-C cable and charge it conveniently thanks to the reverse charging feature. 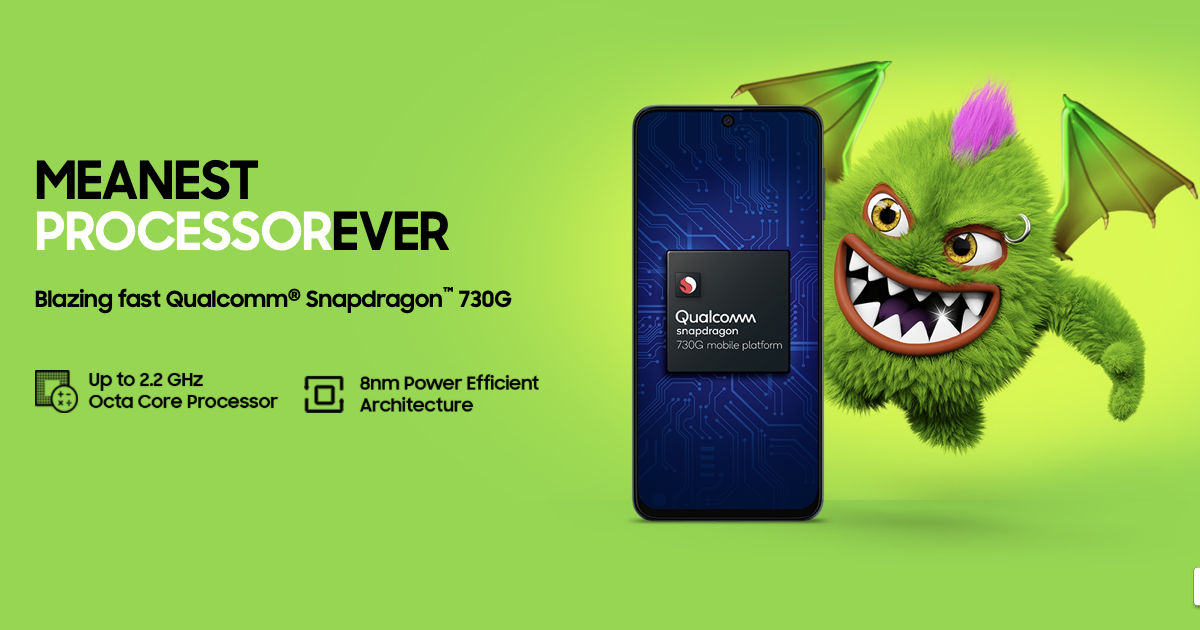 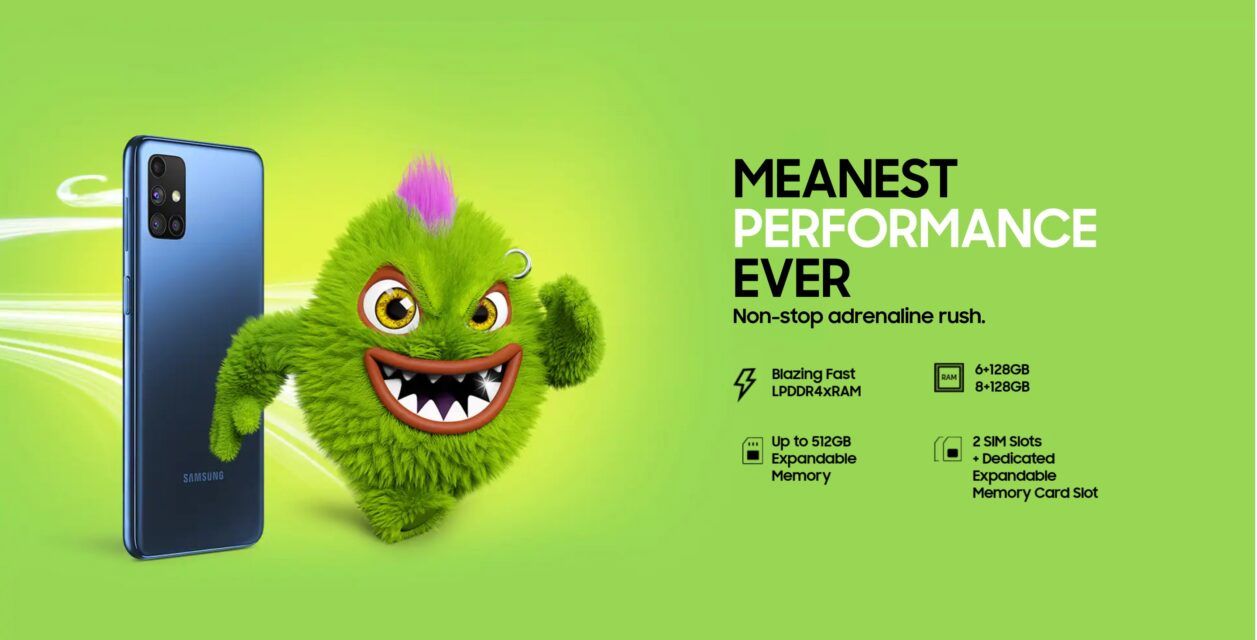 With such unbridled power under the hood, the Galaxy M51 can easily handle most graphic intensive games you throw at it. With AI Game Booster technology, the Samsung Galaxy M51 also has the ability to learn the usage pattern of the user for each game they play. The phone then automatically optimises the game to offer the best mix of performance and battery life. Game Booster also comes with features like switching off alerts and notifications and locking the navigation keys while gaming. It also lets users capture screenshots and record the gameplay using the screen recording feature. With up to 8GB of LPDDR4x RAM on offer, the Samsung Galaxy M51 also makes for a multi-tasking powerhouse.

Another area where Samsung Galaxy M Series smartphones have an unmatched lead over the competition is the display. With past M series handsets already featuring large 6.5-inch Super AMOLED panels, it was only natural that Samsung offers something exceptional with the most powerful Galaxy M series ever. And that is precisely what the company has delivered.

The massive 6.7-inch sAMOLED Plus display on the Galaxy M51 is not only larger compared to the older 6.5-inch panels, the company has also managed to make it 13 percent thinner and 12 percent lighter compared to older models. This, in turn, lets the Galaxy M51 feature a svelte, thin body that weighs just 213g – a remarkable achievement for a phone that also carries a massive 7,000mAh battery.

Other advantages of the sAMOLED Plus panel on the Samsung Galaxy M51 include low power consumption leading to increased battery life, and better colour reproduction when compared to competing LCD panels. The display on the Galaxy M51 has an aspect ratio of 20:9 and boasts of FHD+ resolution. It has a contrast ratio of 78690:1 and delivers vivid colours thanks to support for up to 110 percent of the NTSC colour gamut. 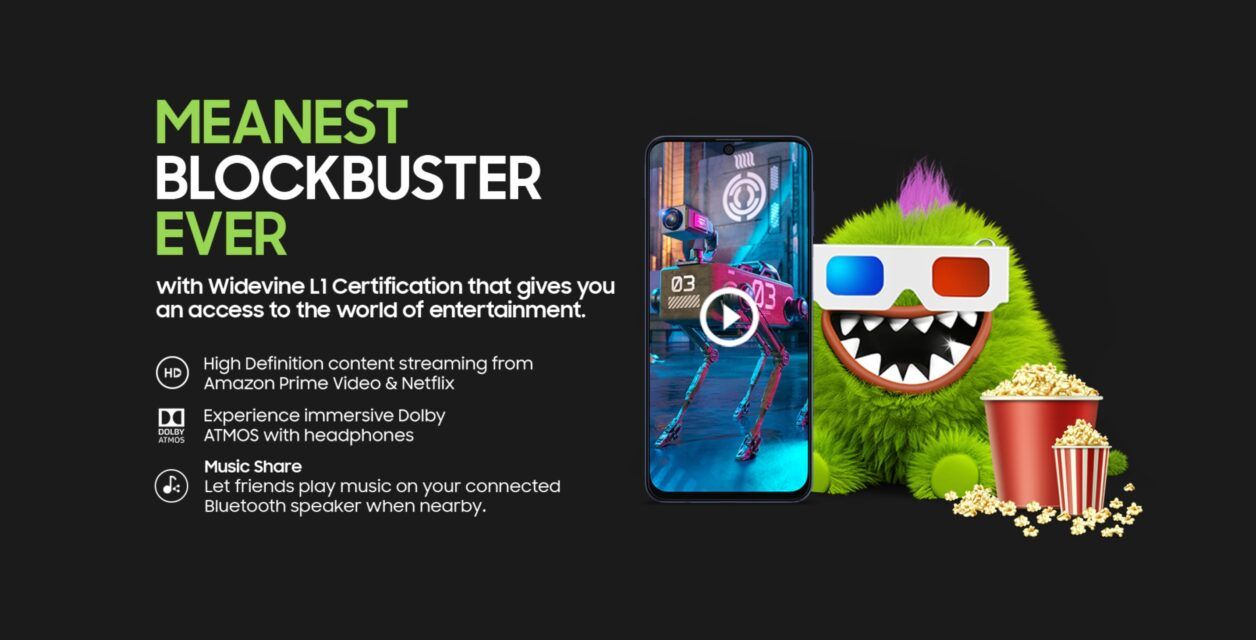 The Samsung Galaxy M51 also happens to be Widevine L1-certified. This means users will be able to watch FHD content on platforms like Netflix, Hotstar, and Amazon Prime Video in their full glory at FHD resolution. This feature – combined with the massive 7,000mAh battery – makes the Galaxy M51 an unbeatable tool for content consumption.

The camera setup on the Samsung Galaxy M51 includes a quad-camera setup at the rear and a single 32MP front-facing selfie camera housed within the Infinity-O punch hole. While the front camera uses the Sony IMX 616 sensor, the 64MP primary camera at the rear uses the Sony IMX 682 sensor. These world-class image sensors let users capture stunning photos, no matter what the lighting conditions are. The secondary camera on the phone uses a 12MP sensor and a 123-degree ultra-wide-angle lens that lets users capture dramatic, super wide-angle shots. The other two 5MP sensors are dedicated to macro photography and depth sensing. This, in effect, makes the Samsung Galaxy M51 a versatile camera phone that can easily handle a wide variety of photography scenarios.

Samsung also packs in a lot of software features that, in effect, offer users a well-rounded camera experience. Some examples include the Live Focus feature that uses both hardware and software enhancements to capture professional-looking portrait shots and close up images.

Samsung Galaxy M51 also supports the amazing ‘Single Take’ feature that lets users capture multiple instances of the same shot. All the users need to do is to navigate to the Single Take mode and hit the record button at the right time. Once this is done, the M51 delivers as many as ten different outputs, which include up to 7 photos and three videos. This could be extremely useful, especially when capturing important moments like a kid’s birthday or a wedding. The Galaxy M51 can also turn millennials into social media stars with features like Smart Selfie Angle, My Filters, and Night Hyperlapse.

The Galaxy M51 also lets users capture professional-looking videos thanks to support for 4K recording and slow-motion footage. Note that users can also use the front-facing camera to record 4K videos to do the same thing. 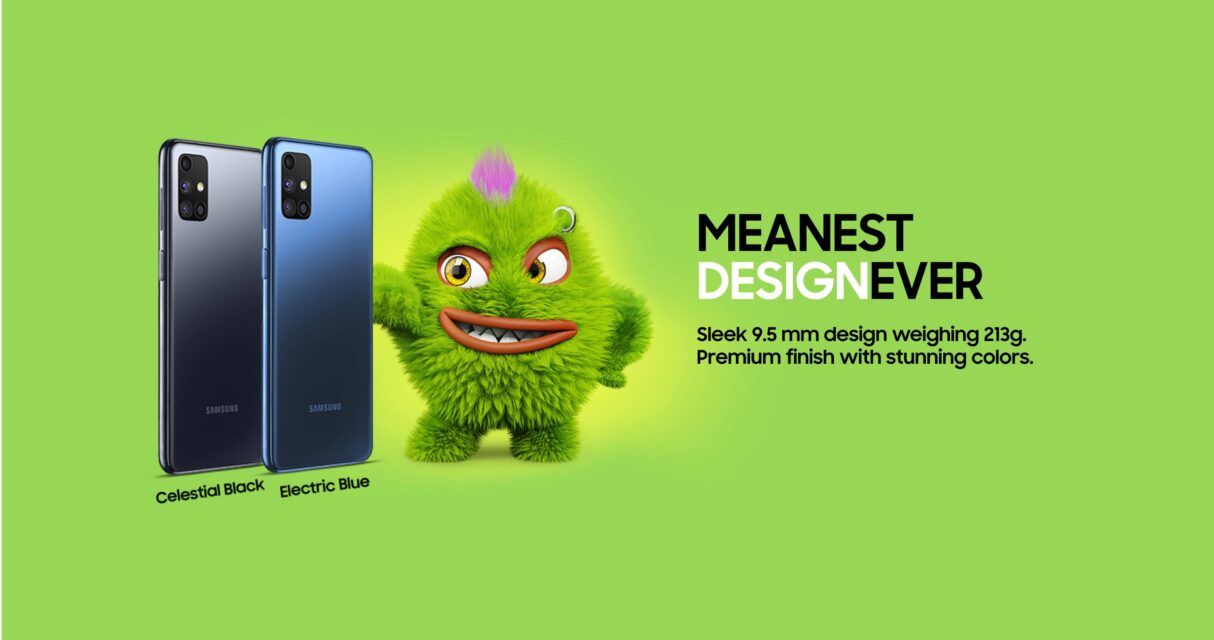 Usually, with smartphones that have large battery capacity, the one thing users almost certainly compromise on is the looks and design. Until Samsung came along, this was usually the case. The Galaxy M51, like its predecessors, is an attractive smartphone that manages to look sleek while not compromising one bit on functionality. Even with the massive 7,000mAh battery, the phone is just 9.5mm thin and weighs just 213g. This makes it look sleek and stylish despite packing a huge cell. It also comes in two unmissable colour options, Celestial Black and Electric Blue, that will turn heads every time you take the phone out.

There are no two ways about it – the Samsung Galaxy M51 is one smartphone you cannot afford to miss! While its claim to fame might certainly be its gargantuan 7,000mAh battery, there is a lot more that is going with the M51 that make it the device of choice for most people on the lookout for a no-compromise mid-range smartphone. Of course, there is simply no way that you won’t notice the excellent battery life that is guaranteed when you buy the phone.

Samsung Galaxy M51 comes in two attractive options: a 6GB + 128GB variant that costs Rs 24,999 and an 8GB + 128GB variant priced at Rs 26,999. And things get even better – customers buying the smartphone using a HDFC Bank credit or debit card will get up to Rs 2,000 instant cashback on both EMI and non-EMI purchases. This brings down the starting price of smartphone to just Rs 22,999! This instant cashback offer starts on September 18th and runs till September 20th. So log on to Samsung.com or Amazon.in at 12pm on September 18th and buy the new Galaxy M51 for the best mid-range smartphone experience!