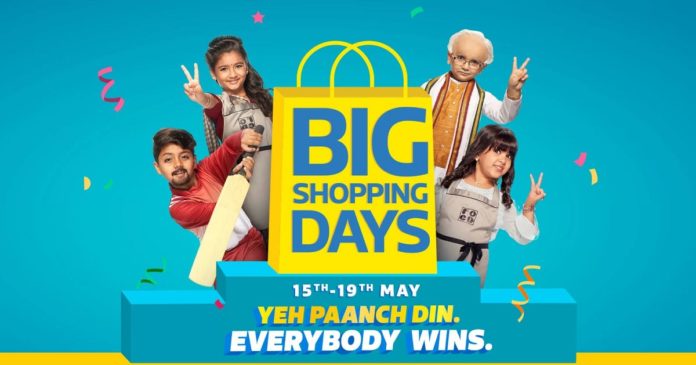 Flipkart will be hosting its Big Shopping Days next week on May 15th. However, Flipkart Plus members will be able to access the deals a few hours earlier, i.e. from 8pm on May 14th. Ahead of that, the e-commerce platform has previewed the deals that it’ll be offering on a range of smartphones, including iPhones, Honor 10 Lite, OPPO K1, Nokia 5.1 Plus, Realme C1, and much more. In addition to that, there are deals on laptops, cameras, speakers, and other electronics. Flipkart has also partnered with HDFC Bank to offer 10 percent instant discount to users making payments via HDFC debit and credit cards during the sale. Customers can also shop and win iPhones, laptops, TVs, and more on Big Shopping Days, which will be live until May 19th.

There will also be an exchange offer on Vivo V11 Pro, Vivo 15 Pro, and OPPO F11 Pro smartphones. Deals on iPhones will be revealed later and offer on Honor smartphones will be announced on each day of Big Shopping Days sale. Flipkart is also offering its mobile protection plan on Realme, ASUS, Xiaomi, and more smartphones at a starting price of Re 1.

In addition to that, laptops with i5 processors will be available for as low as Rs 29,990 whereas headphones and speakers with minimum 60 percent discount. There are discounts of Honor Band 3, Apple Watch Series 3/ Series 4, Google Home and Mini, Google Chromecast, power banks, GoPros, and health and fitness devices.